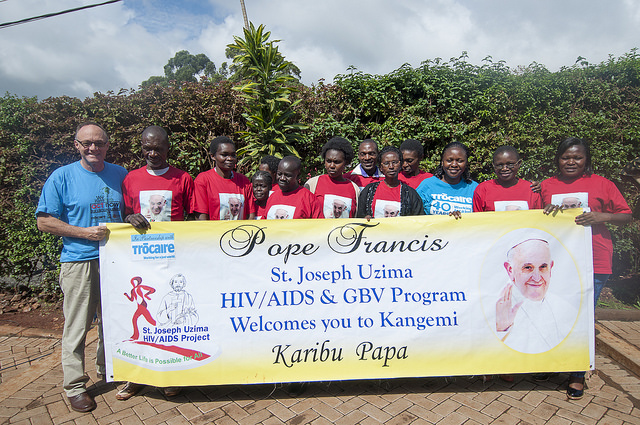 St.Jospeh Uzima members and Caritas and CHAN member Trocaire beneficiaries in Kangemi welcome the Pope with a banner as he visited the church during his Kenya tour. Credit: Trocaire

The contribution of FBOs to healthcare, and particularly to HIV care, has not always received the recognition it deserves. Some governments and experts in the medical field recognize us as well intentioned and “nice” people and express appreciation for our programmes at the grassroots, but they often claim that we just don’t enough data to demonstrate the effectiveness of our programmes.

The report “Ending AIDS as a Public Health Threat” offers compelling evidence that, in many parts of the world, FBOs are key stakeholders in the HIV field. The report not only shows what we’re doing, but it also presents approaches that could serve as good care models for both governments and private providers..

Particularly in developing countries, FBOs have long-established traditions of caring for the poorest and least developed communities. The quality of care is motivated by the value of service and is driven by an ethos of compassion and solidarity.

One of the differences between FBOs and other medical providers is that they take into account the needs of the whole person – including their emotional, social and spiritual needs. We do not consider only their medical conditions.

In fact, I think that the provision of pastoral or spiritual care if one of the most essential components of FBO health programmes. People have better recovery rates when they receive pastoral care; this is true for many illnesses, not only for HIV infection, but also for other illnesses. Spirituality beliefs and practices provide people with a way of expressing and strengthening their relationship with God.

Therefore, it is an important element of life for many people in various parts of the world. Clients or patients receiving services from FBOs often say that they prefer this approach to treatment – the holistic care doesn’t just treat the body but also cares for the mind and spirit. It provides people with the motivation to stay on treatment and to live longer.

People living with HIV reported that they faced much less stigmatizing or discrimination when seeking services from FBOs. They also claimed that they felt more secure that staff of FBOs are better at maintaining confidentiality. Staff and volunteers in FBOs are trained to show respect for those who are suffering and to uphold the Church belief that all people are created in the image and likeness and God, whatever their health status might be.

When the HIV epidemic moved into its third decade, the international public health community focused more on a systematic and targeted response than on emergency response. The trend now is to have governments take more responsibility for HIV but in low- and middle-income countries, the governments often are burdened with weak healthcare infrastructures and are not always able to reach all people living in poverty or in rural areas.

Also, many of those interviewed reported that they were facing cutbacks in funding, which results in many challenges and problems. There is a serious concern that national governments and/or foreign funders will no longer provide enough support to assure life-long medicines for people living with HIV?

Another serious issue concerns the future of AIDS orphans. It is estimated that 17 million children and adolescents worldwide who have lost parents to AIDS-related illnesses. Some of these children rebel against their situation, which becomes even more complicated when the young people themselves are living with HIV. Special efforts are needed to respond to the needs of these vulnerable young people.

Dr. Luiz Loures, Deputy Executive Director of UNAIDS, identified the crucial contribution of FBOs to this type of partnership, “We are entering a new phase where we can see the beginning of the end of AIDS. The faith communities have the scale, and the means to move us forward. You care about the dignity of the person and it is only this unique combination of access to drugs and dignity that can provide the necessary drive to reach the end of the AIDS epidemic.”