Last summer, with the precious support of Caritas Switzerland, I had the chance to visit Ethiopia. Once there, I spent a week in the Adigrat district, in the Tigrai region, and two weeks travelling throughout the country.

The very first day, on the road between Mekelle and Adigrat, Sebatu from Diocesan Catholic Secretariat explained that rainfall had been really poor up until that moment, though we were in the midst of the rainy season. The landscape around us proved his remark. Even though it was my first visit to that amazing country and I couldn’t compare it to anything similar from past travels, it was clear that the land was silently calling for something more. Land does not lie, not in Africa nor anywhere else in the world.

The authorities said that it was too early to call it drought, that the rainy season would normally last a few more weeks, but with climate change you never know. And this is exactly what happened this year. Rain never came. So, all Caritas agencies gathering in Addis launched an appeal to help the villages, communities and families whose agricultural production was damaged and, consequently, whose access to food was more than threatened. 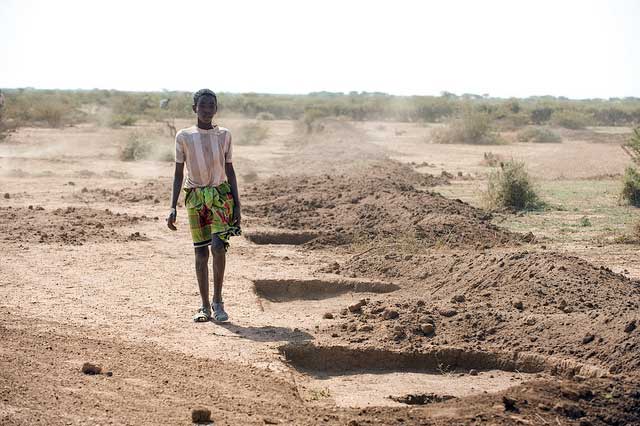 A local youth walks by a series of holes known as micro basis that are part of a CI-supported water project in Ethiopia’s arid Jijiga Zone. Photo by David Snyder/Caritas

This is one of the results of climate change. No matter how much we would like to think that this year was exceptional, we know – statistics show – that it is not so.

Access to food is a fundamental right and climate change is menacing it everywhere in the world. According to the World Food Programme, Ethiopia has a very high hunger and climate vulnerability index, as is the case for most countries of the global south.

In its Food Security Report, Caritas Europa underlines once again that there are 650 million vulnerable people directly exposed to climate change in the world today. These people might be forced to leave their homes and lands in order to find decent solutions for a better life elsewhere. This number is huge when compared to the population of Europe, for instance. Also, these people impact the least the global CO2 production and pollution. This is unjust and unfair.

Caritas Europa welcomes the will expressed by the European Union to be the leader in this battle and in arriving at an effective agreement at COP21. We consider the report approved by the European Parliament to be consistent and the council conclusions on climate finance a good step towards Paris. We know how difficult it was to reach an agreement only within our region.

Without the leadership of Europe and other industrialised countries, strategies to mitigate climate change will not be successful. We are aware that Europe alone is not enough, but it can be a fundamental part of the solution.

At Caritas, we always aim to put people at the centre of our action. We call for a consistent switch to a renewable energy future and an effective process towards sustainable access to energy for all. We want the climate talks to consider the link between climate change and food security until a final agreement is reached.

Being very much grassroots based, Caritas is working directly with communities and people on the field in order to build resilience and alternative sustainable measures for dealing with climate change. Our capacity building actions have included the conservation of land, the creation of innovative means of irrigation and the establishment of new cultures to allow for a more balanced and varied diet throughout the year.

As the saying goes: “when the going gets tough, the tough get going,” and this is what we now need. The challenge is huge. It requires actions from both the political and the individual sides. For this reason, we are very enthusiastic in answering the appeal expressed by Pope Francis in his encyclical: “we believe care for creation should be at the core of personal behaviours as, for example, sustainable production and consumption patterns.”

In Europe, as in other industrialised countries, one track cannot go without the other. This is why “coherence” is a key word when talking about climate and several other areas impacting the world globally. The alarm bell has rung in Europe already several times. Violent and unpredictable floods, increasing temperatures and melting glaciers are only the most visible phenomena in our region. But, maybe it is because of them that people have started to worry even here in Brussels, where a sunny day out of season wouldn’t normally be such a bad news.