Medical care for refugees in Slovenia 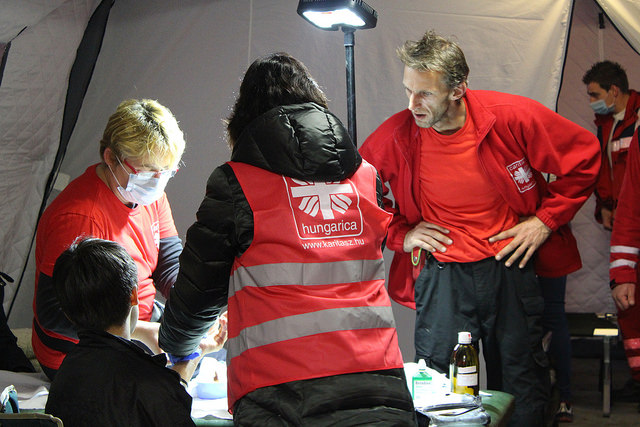 It’s a cold, grimy day in Dobova. The rain drizzles down, grey clouds loom and mist collects in pockets.

A queue of refugees scramble in a line, ankle-deep in mud, as volunteers give them bread and water to take on the train to the Austrian border. This is the next stop on an unending journey, where there will be more waiting and more queuing. Their longing to board the train is clear. The queue moves fast. No one wants to wait another day, another hour.

Dobova is home to a new refugee camp in eastern Slovenia, near the border of Croatia. The camp is on the outskirts of this sleepy town, surrounded by green fields and facing the Zagreb to Ljubljana railway line. Since the crisis began, this quiet town has not just been filled by refugees, but hoards of police, army, media and aid workers.

Inside the camp, a beacon of warmth on this miserable day radiates from the red Caritas Hungary medical tent. An infrared glow inside declares the state of emergency in the camp, like a flashing ambulance siren, but its warmth and quiet is comforting for overwhelmed and sick refugees.

A young Iraqi teen sits on a low metal bed looking despondent, his head hung low, eyes lethargic. He seems to have a fever. A doctor kneels down and begins to take his temperature and pulse. He has no English, but the small skilled crew of medics speak to him in Arabic.

Soon a slightly older man in his 20s comes in. He’s extremely thin with gaunt, hollowed cheeks and a boney frame.

Next is a young Afghan boy in need of stiches on his hand after cutting it on a rock, followed by another Afghan boy, with a bleeding head wound.

The only Farsi speaker on the team, Bahrang Mostaan (32), is in demand this morning. Originally from Iran, but living in Europe since childhood, he brings his cheerful nature to all his patients, despite working long hours on little sleep.

Bahrang is a sixth year medical student from Debrecen University in Hungary, who is volunteering for a week in the camp, with a view to returning for more shifts as needed. 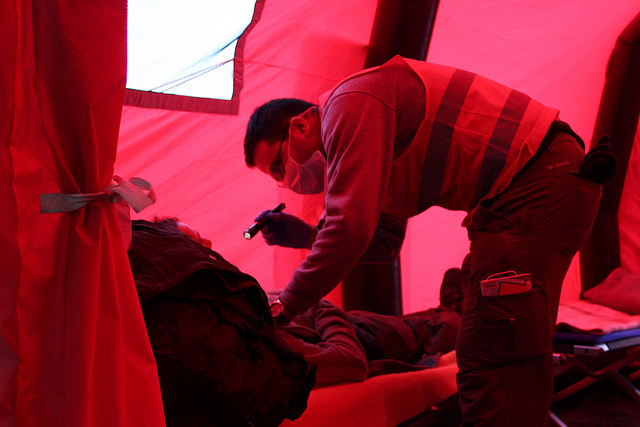 “The people come in waves,” he said. “You have a hectic period and then a few hours of calm. You never know what will happen. The most common illnesses are upper respiratory infections and gastroenteritis.

“The most serious condition the team treated recently was a young girl in pre-shock. Her heart wasn’t pumping blood properly. All her veins and arteries were dilated, so there was no blood pressure. I am not sure what that cause was. It could have been fatigue, prolonged stress, lack of food and water…”

The ambulance tent has a steady flow of patients, 100 people a day on average. It was initially set up to treat refugees in Hungary before the government closed its border in mid-September. Having no more refugees to treat, Caritas Hungary brought the service to Slovenia.

“We give medical care to refugees and the Caritas Slovenia tent across the way gives food, drinks, clothes and blankets,” said Balint Vadasz, Head of Emergency Response with Caritas Hungary.

“Basic medical care is a human right and we thought it was very important to address this. Our medical team and ambulance tent is enough to provide professional care. It is small, flexible, quick to build and can be removed when needed.

“Sometimes we have to send people to hospital if their condition looks very serious. But usually when they hear that they will have to go to hospital they try to avoid it, as they don’t want to get split up from their families.

“We don’t know what will happen in the winter. We take each week as it comes, as the situation is always changing.”

The refugee trail is taking a serious toll on people’s health. “People here have been under stress for a long time,” said Bahrang. “I have seen young boys completely exhausted. There was a guy yesterday who was very close to a full breakdown. He was very, very depressed and wouldn’t take medical advice, as he was so low. But it had a happy ending, as we were able to make sure he got the last bus, so he could keep moving.”

Outside a rumble can be heard and a Caritas volunteer calls out, “look, a train”. As it chugs by, refugees peer out the windows to get a view of their next stop.

1,500 are expected into Dobova in the next hour. The rain starts to fall. Everyone waits. It’s the calm before the storm.