The news this week is that 2015 is shaping up to be the hottest year on record – with global temperatures averaging almost 1oC above normal. For people in some parts of the world, this might still seem like a technical measurement, or a future concern. For us in Oceania, it is rapidly becoming a matter of life or death.

As I start packing my bags and preparing to leave New Zealand for the COP21 United Nations climate summit in Paris, I have many people and images in my mind, such as: 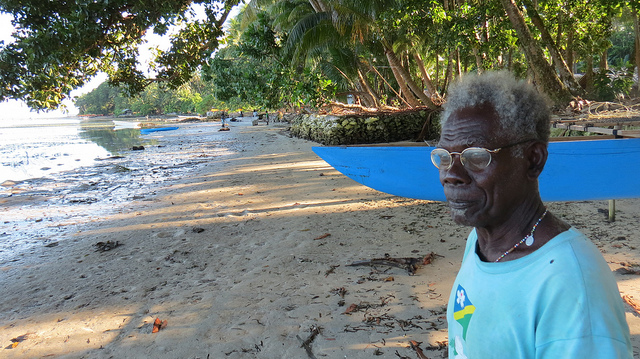 “I hope I die before these islands are covered by the sea.” Eighty-year-old John Sailik was born on the Carteret Islands, a ring of six atolls 50 miles off the coast of Papua New Guinea. Photo by Nicholson/Caritas

Our region was hit hard by three super-cyclones in 2015. Cyclone Pam in March was the region’s second most intense storm on record. Of six Pacific nations badly affected, Vanuatu was the hardest hit: 15,000 homes destroyed and 70 per cent of its 250,000 population affected.

Now, our region is taking a second hit as a severe El Nino takes effect – expecting to bring drought until March to most Pacific islands, though Kiribati and Tuvalu face higher than average rainfall, and the whole region faces greater risk of cyclones. Already, 90,000 people are receiving emergency food in Vanuatu due to the combined effects of cyclone Pam and El Nino, while Tonga is predicting 80 per cent of locally grown taro will be damaged by the weather phenomenon that brings extreme weather to much of the planet.

Caritas Aotearoa New Zealand is bringing these stories and others to the world’s attention through our environmental research and advocacy. In our first Caritas State of the Environment in Oceania report released on St Francis Day (4th October) we are amplifying the voices of the most vulnerable. They deserve to be heard.

Our neighbours on low-lying atolls such as Kiribati and Tuvalu have told us this year of more frequent and stronger King tides. Caritas partners in Papua New Guinea speak to us of widespread relocation of people due to coastal erosion and flooding – affecting about 6,000 people a year in Papua New Guinea. Yet there is little comprehensive data on total numbers of people affected in such ways around the Pacific. 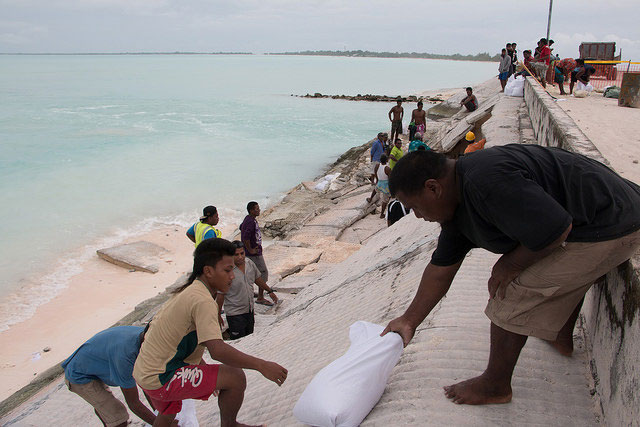 While funds may be available to repair major infrastructure, ordinary people in the Pacific are largely having to fend for themselves. For example, the village of Tebunginako on Abaiang atoll in Kiribati gets flooded every high tide. The people have got used to it and when high tide comes, they put all their things in high places. “For them, it’s now part of their life,” says Parish priest Fr Buutonga Nakuau. They know they can’t carry on like this forever, so are searching for land elsewhere on Abaiang, but they will need funds to buy the land.

Climate finance is increasing in the Pacific, but it is still far below what is needed. Financial flows to developing nations are probably only about 10 percent of what is needed. Though there are some very good projects – such as aid schemes to provide comprehensive solar power to smaller islands like those in Tokelau and the Cook Islands, there are also some questionable allocations being made in the name of climate finance.

These include our own government’s New Zealand Aid Programme providing $21,000 (€12,700) to a second jetty for cruise ships in the Cook Islands, and more than $5.5 million (€3.3 million) towards rehabilitation of three runways in the Solomon Islands, on the justification it would “reduce aviation fuel loads”. While these projects may ameliorate climate change impacts to the economies of those countries, they clearly do not help the most vulnerable people address the erosion of coastlines, loss of food or water or protect them against extreme weather.

We face significant challenges, but as Pope Francis reminds us “All is not lost.” We are still capable of finding a solution that protects the Earth and all of us who live and depend on the Earth. The Paris climate summit is a key moment in finding that solution. I look forward to bringing the voices of Oceania to Paris.