Paris climate summit: an opportunity for a unified humanity

Caritas and CIDSE* say that the UN climate summit in Paris (COP21) needs to respond to the urgency of dangerous climate change but also serve as a milestone for creating a unified vision for the future of humanity leaving no one behind.

Countries represented at COP 21 are called to reach a new climate change agreement to reduce carbon emissions, end further global warming and to allow people and countries to adapt to climate change. The summit starts on 30th November, just over two weeks after 130 people were killed in a series of coordinated attacks in the French capital. 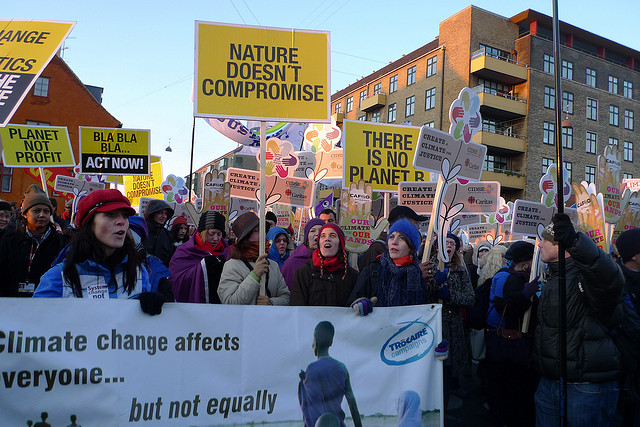 Campaigning for action on Climate Change. Caritas and CIDSE call for a legally binding and equitable agreement on climate change to be reached at the COP21 summit. Photo by Trocaire

“Our hearts are with the victims of the terrorist attacks and their families as we prepare for COP21,” says Michel Roy, secretary general of Caritas Internationalis. “Such an act of injustice spurs us on in our work towards a greater global justice on many issues which lead to inequality and suffering, including climate change.”

Representing over 180 Catholic organisations worldwide, Caritas and CIDSE call for a legally binding and equitable agreement on climate change to be reached at the COP21 summit. They are convinced that if climate change is dealt with in a way that protects human rights for all this would be key to eradicating poverty, hunger and inequality.

Bernd Nilles, secretary general of CIDSE, says, “We are deeply committed to working with and for people affected by climate change. To protect the most poor and vulnerable the global economy needs to decarbonise by 2050.”

Both organisations believe that any decision at COP21 needs to be based on strong ethical grounds; that people and politics can pave the way towards low carbon societies and that the new agreement needs to guarantee the funds for this transition and to help the world’s poorest people adapt to climate change and deal with its consequences.

They say that fossil fuels should not receive any more subsidies and should be phased out as soon as possible and at the latest by 2050. Sustainable energy should be accessible to all as part of any long-term plan to limit global warming below 1.5 degree Celsius. 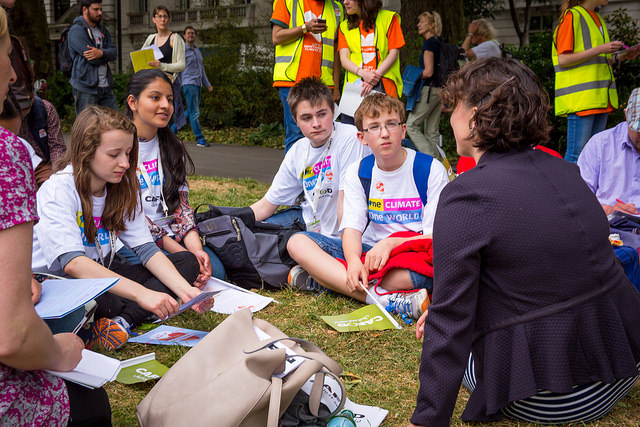 Supporters of Caritas in the UK talked to their member of parliament about climate change and the devastating impact it’s having on people living in poverty overseas. Photo by Louise Norton/ CAFOD, June 2015

This implies that development models and lifestyles need to change.  In June 2015 Pope Francis made a powerful call to “every person living on this planet” (LS #3) to take care of “our common home” in his encyclical letter Laudato Si’. The encyclical urges everyone to start looking at the environmental and human aspects of development in a new vision of integral ecology.

Caritas and CIDSE, along with Friends of the Earth and Misereor, are holding a side event at COP21 on 7th December entitled “Deal with it!” which will discuss the impact of Climate Change in Oceania and the Amazon Region. Speakers include a European leader; Julianne Hickey, director of Caritas Aotearoa New Zealand and Ivo Poletto from Caritas Brazil, Coordinator of the Forum sobre Cambio Climático, representing the Church Pan-Amazonian Network (REPAM).

Despite the cancellation of November 29 and December 12 mobilisations days in Paris, Caritas and CIDSE organisations in many parts of the world have organised participation in global climate marches as well as via social media and virtual activities to urge leaders to reach a binding climate decision. (See a map of where Caritas organisations will march against climate change).

*CIDSE is the alliance of Catholic development agencies.*