Together as one human family on migration and mobility

Last year, African and European leaders came together at the Fourth EU-Africa Summit to agree on concrete forms of cooperation on migration and mobility, without embarking on the implementation. It is, therefore, high time that our leaders put this cooperation into action during the EU-Africa Valetta Summit.

“At that time, Libya was secure and peaceful. I stayed there eleven years and worked on farms, generally tending the cattle. I was working, but no, I was not paid. Sometimes they gave money, sometimes they did not. I was sleeping on the floor. At the beginning, it was fine, I felt secure. But after that, it was war. I went to prison for seven months. I was beaten. Friends died next to me,” explained 29 years old Bakan, a farm hand from Sudan who is currently trapped in Calais, France. 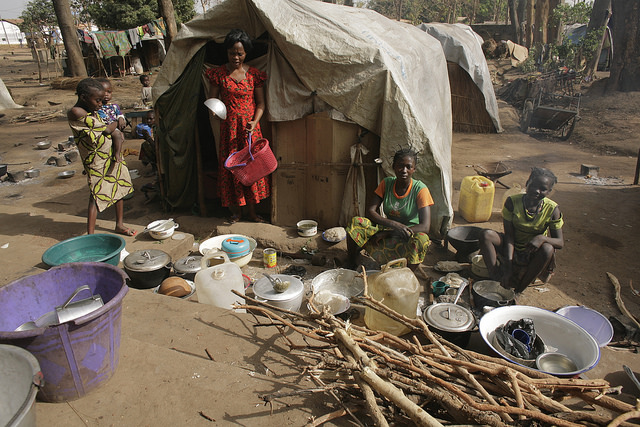 Internally displaced people live in a camp at the Catholic mission in Bossangoa, Central African Republic. Photo by Caritas

Like Bakan, refugees and migrants from Africa are too often facing hostility, violence and even death when fleeing conflict or extreme poverty. Bob van Dillen of Cordaid (Caritas Netherlands) reminds that, “God created us all free, but men created borders. God must be in tears seeing how these same borders now prevent people from fleeing war and persecution, and then perish in our coastal waters. This was never His intention!” We must all ensure that the human dignity of each person is respected. Read Caritas Statement for the EU-Africa Valetta Summit (in pdf).

Thus far, however, the EU has been unable to develop coordinated migration and development policies that are based on justice, human dignity and solidarity. The Valetta Summit is an opportunity for the EU and its African counterparts to begin addressing together social injustice and poverty, and to foster resilience against emerging conflicts and crises.

As a priority, Caritas Europa calls on European leaders to: