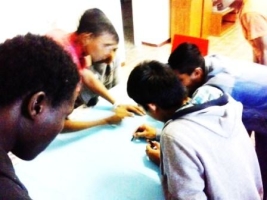 While youngsters previously came mostly from Afghanistan and Bangladesh, for some time minors have been arriving mainly from Egypt. Their ever lower age is worrying: often around 11-12 years old. Credit: Caritas Rome

On 20 November, which marks Universal Children’s Day and the 25th anniversary of the Convention on the Rights of the Child, I took part in the event, “Welcome strategies and integration paths”, organised by Caritas Rome (Italy) at its emergency reception centre for minors. The event was also attended by representatives from local authorities, such as the prefecture and the municipality, which have a role in the responsibility of protecting foreign minors.

Our colleagues presented an interesting analysis of the new emergencies and illustrated the change in migration flows. They also mentioned innovations arising from application of the new SPRAR to all foreign minors, as apart from being asylum seekers they are also in a vulnerable state. Large numbers of minors are arriving in Rome. While youngsters previously came mostly from Afghanistan and Bangladesh, for some time minors have been arriving mainly from Egypt. Their ever lower age is worrying: often around 11-12 years old. This is too young to deal with the difficult journey, the cultural shock, and the psychophysical consequences of the fear and violence they have witnessed or experienced alone, without the support of their family. It’s a challenge, both for the youngsters who have at least been lucky enough to arrive safe and sound, and for the workers who take care of them and also try to ensure their legal protection.

Lacking trust, the youngsters seldom allow workers to establish a relationship with their families, thus making any assisted, secure and voluntary return extremely difficult, even though the minors themselves would often like to do so. The consular authorities in their countries of origin often show little willingness to collaborate.

Many of the youngsters are polite and respectful, but others, especially those who are a bit older, may be rude and somewhat bullying with the workers and the more vulnerable children. Therefore, welcome – not to mention integration – is difficult to manage with the few available members of staff (who are often employed on a temporary basis due to lack of funds). Public authorities do not take charge of children who have serious psychiatric problems.

Some minors have unrealistic expectations and don’t understand why they can’t work, go to school or learn a trade. They bear the weight of the responsibility handed to them by their families when they left home. In any case, in the emergency reception centres, there isn’t enough time to get to know each other well and establish a trusting relationship. Sometimes the youngsters stay for such a short time that it’s difficult to remember their names!

Besides, many minors accommodated in centres in Rome are contacted by their traffickers (or the youngsters get in touch with them) so that they can work illegally during periods they are outside the centre. This enables them to pay back to the traffickers the debt taken on by their families in their countries of origin. Illegal work isn’t the only scourge. Sometimes minors end up being involved in petty crime and prostitution circles.

Those responsible for the minors are in a delicate position, and they have to take care to avoid inadvertent collusion.

Managing everyday life like an emergency cannot continue. We need to be able to plan and have the wherewithal for long-term action

Prevention initiatives in countries of origin would be beneficial. It’s understandable that a child might flee from Afghanistan or Syria, but less so that a family, with at least one parent who has decent albeit modest employment, might send their child abroad in the hands of people traffickers.

Indeed, the traffickers are the ones who convince the families and lead them to believe it’s a sound investment, so prevention is needed precisely in this social fabric of origin, making people aware of the truth, the cost and the pain, and the risks involved.

The reception centres should be reconsidered and given a precise role to enable personalised and individualised courses of action based on real needs.

It’s important to introduce a single age assessment procedure to be applied throughout Italy. An interdisciplinary commission that, by assessing subjective and objective elements – firstly, medical and ethno-anthropological ones (growth indicators, auxological tests, etc.) – can make an objective and consistent assessment, which is therefore closer to the actual figure. On the one hand, this would guarantee a reduction in abuse of procedures and the system (for example, criminal organisations that persuade migrants to declare themselves as minors even though they are already adults, or those who do so on their own personal initiative as otherwise they would be illegal residents), and on the other, it would avoid unpleasant and worrying situations of coexistence of adults and minors at centres allocated to welcome minors.

Managing everyday life like an emergency cannot continue. We need to be able to plan and have the wherewithal for long-term action, for a real life project, as the EU has declared. We also need to consider the possibility of foster care by distant relatives living in Italy. It’s a good solution, but it should be supported in order to prevent an already financially vulnerable family from sending youngsters out to work rather than having them complete their schooling and vocational training.

The latter is in short supply and unfortunately internships are often a somewhat disguised form of temporary exploitation that don’t enable access to a real job with a regular employment contract.
On reaching the age of 18, the youngsters leave the reception centres and often end up being subjected to forms of serious labour exploitation.

As already mentioned, the new SPRAR covers all foreign minors on Italian soil, even if they aren’t asylum seekers, due to their vulnerable state. Apparently, 80% of the Egyptian youngsters currently living in Rome may be considered as victims of trafficking and labour exploitation of minors. Emergency reception centres will be state-run and minors will stay in them for a maximum of 60 days for the initial screening, and then be allocated to second reception centres on a long-term basis.

The documentary “Sorry” made by TGR Lazio (regional TV news) shows the life of a worker in the Rome centres and tells the stories of the children arriving in them. The documentary can be viewed on the website of the diocesan Caritas of Rome.

After so many efforts and changes to protect children and the progress made over the years, it seems impossible, but the inhuman reality is that many children live like this, deprived of a carefree childhood, growing up with responsibilities unbefitting their age, exposed to abuse and exploitation, and far from the family environment, the natural core of protection and affection.

However, we must face up to the situation, take up the challenge and help those who welcome and take care of these children. Investment in the present and the future of these children is needed so that they can be serene and then later become independent and responsible adults. Finally, we need to help them turn migration into assets of experience and rather special skills to be used positively in their lives. This will enable them to contribute towards building better societies, in their country of origin as well as in their host country.

No country may consider itself to be civilised and advanced if it has children living there who are partially denied the rights of the child. It’s vitally important that countries of origin and host countries cooperate together to protect minors, by involving the families and carrying out prevention initiatives in contexts where this is possible.

More information and documents about the event and the video “Sorry” are available at this direct link.