Christmas lunch with refugees in Belgrade 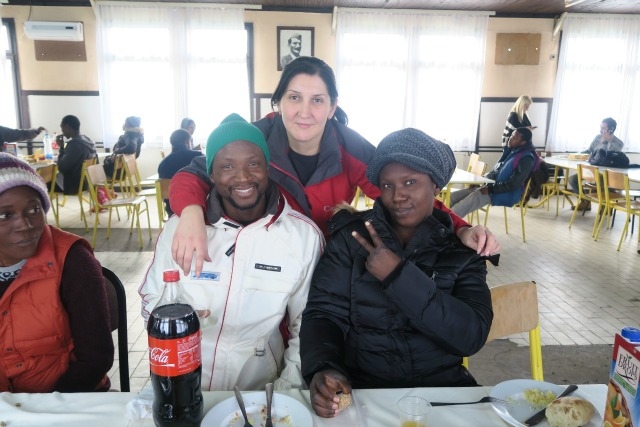 The asylum centre in Belgrade welcomes around 200 refugees and migrants a day. Some of them just stay a day or two while passing through Serbia, while others stay longer.

Not many decide to apply for asylum in Serbia, as the country is struggling with poverty itself. However, due to new policies stopping those coming from countries other than Syria, Afghanistan or Iraq continuing their trip towards the Western Europe, many are forced to stay in Serbia for the moment.

Migrants from countries like Sudan, Ghana, Gambia, Somalia, Pakistan, Ethiopia and others are currently staying at the centre in Belgrade. Among them there are around 20 Christians.

In order to make Christmas a better celebration for them, Caritas and the Commissariat for the Refugees prepared a Christmas lunch.

The feast was also open to other migrants and refugees, who are mainly Muslim, and to the employees of the centre, who are mainly Orthodox Christians (so they will be celebrating Christmas in two weeks). The variety of food helped everyone feel welcome, respecting different religious traditions.

Rev. Grzegorz Chudek, a Catholic parish priest from Belgrade involved in the work of Caritas, made a welcoming speech, explaining that Christmas reminds us that God loves each one of us, especially the poorest and the smallest.

Nana was one of those migrants present. He is a young man from Ghana. He says however that he is not an economic migrant, although he was considered that way based on his nationality. He explained that he was a member of the national football team, but he had to escape his country. He says he was threatened by another ethic group who already killed his mother.

He couldn’t even get in touch with his sisters who stayed in Ghana, because he was in such a dangerous position. He is traveling with his brother, who is also staying at the centre in Belgrade. He hopes to return to a normal life and start working somewhere where he manages to settle.