Modar fled Syria in September, looking for sanctuary in Europe from the bombs and the bloodshed of the nearly 6 year civil war. With his brother and sister, all in their early 20s, he crossed the Mediterranean by dinghy and travelled through Europe until they reached a hopeful new start in Holland.

So far, so familiar. 850,000 people made that trip in 2015, mostly from Syria. Yet Modar’s story has a special poignancy for the Caritas family, because he had worked for Caritas Syria as a counsellor since February, himself helping people fleeing from violence. 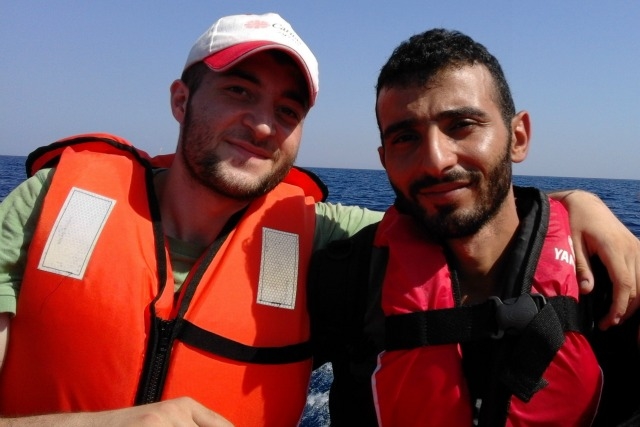 On the crossing from Turkey to Greece. Credit: Caritas

“We cared for children who had come to Damascus from villages under siege,” he said. “They had witnessed terrible things. They were frightened, always. They never wanted to play. Yet we won their trust through games and talking to them.”

Going to work under the shelling was dangerous, but he carried on “because I loved what I was doing”. Modar had already had to give up college because of the fighting.

His family’s second home in Homs, where they spent three months during the summer, had been destroyed by shelling. Life in Damascus was also becoming very dangerous.“We knew a lot of people who had been killed or injured,” he said.

As the fighting intensified, his mother and father began to think about sending their children away.“The mortar fire had become really intense,” said Modar. “It had become too dangerous. Our parents sold the house in Damascus to pay for our trip. They wanted us to live. We wanted a future.”

At least 20 percent of 130 Caritas Syria staff (not counting volunteers) have made the same decision and left Syria since 1 August.

On 1 September, the two brothers and their sister said goodbye to their parents. Fast forward a few days to a wood near Izmir on the eastern Mediterranean coast of Turkey, they’d paid smugglers and were waiting to cross the sea to Greece.

“We stayed in that wood for three days, sleeping on the muddy floor” he said. They had a backpack each with water, extra clothes, some energy food like dates, chocolate and their papers.

“The traffickers were nasty,” said his sister, Tamador. “There was a lot of shouting and fighting between them and other refugees. My brother had been a scout. He knew what to do. He knew how to deal with dangerous situations.” 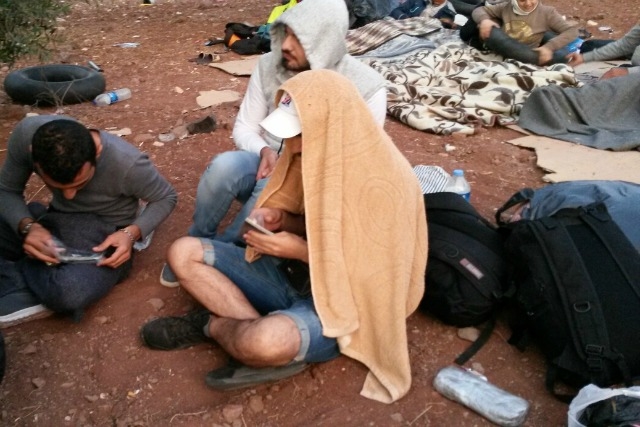 Trying to call home from the shores of the Mediterranean. Credit Caritas

They each paid $1300 to cross by dinghy to Lesbos. “It was very scary,” said Tamador. “We went in the middle of the day. There were 43 people on the boat. There was no space. Once we arrived in Lesbos, we felt free. Not happy exactly, but safe at last.”

The first day, the 11 September, they spent looking for a phone to call their parents to tell them that they were safe. They spent a “freezing night out in the open” followed by a night in a hotel and then an 8 hour ferry ride to Athens.

“When we arrived in Athens, we were in a panic,” said Tamador. “Hungary had announced that it was going to close its borders on 15 September. We had only two days to get there.”

They immediately headed north through Greece, Macedonia and Serbia by coach, train and foot. They arrived on the Serbian border with Hungary on the morning of 15 September. They were too late. The border had closed.

“We slept two nights on the border. It was truly awful. You couldn’t sleep. It was very cold. The only help was from some local volunteers giving out blankets. People were screaming and shouting. It was very scary,” she said. “By that point we felt finished”.

They heard about a bus going to Croatia, so they got on it. “On the Croatian border, there were so many refugees and migrants and so few people helping them. Still, the locals were so kind. They gave us food and blankets. We met a person from Caritas who was helping out”.

The journey was taking its toll on them: “We hadn’t slept for three days. It was really hard. It’s painful to remember.” They caught a bus to the Croatian capital and then another to what they thought was Slovenia. Instead it took them to Hungary.

“We ended up going to Budapest by bus and then by train to the Austrian border,” said Tamador. “We walked 3 km across the border. There were so many people, such chaos, such fear. Thankfully nobody got hurt that day.”

They’d researched their trip through the internet and by speaking to friends. Their goal was Holland. “We wanted to go to the Netherlands because we understood that the Dutch were welcoming, that they spoke English and that procedures for registration were more efficient.”

They passed through Austria and Germany, staying in transit camps along the way. After 21 days on the road, they reached Holland. 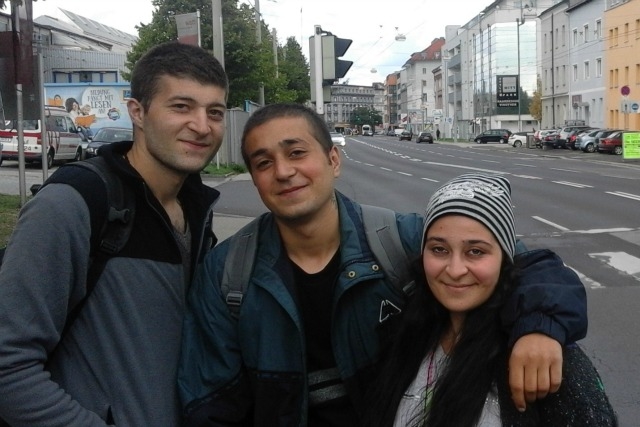 “We were sent to a camp of some 3000 people in the woods near Nijmegen,” said Tamador. “We have been here for 4 months. It’s very bad. There is no privacy. It’s cold. The rules are very strict”.

The refugees rely on local people, saying they’re treated very harshly by the authorities. “There are no simple things arranged like language classes that could really make a difference. Without the local volunteers giving us clothes and food, we’d be lost,” she said

For Modar, it’s been difficult to go from helping people to being helped himself.

“At first he couldn’t accept any help,” said his sister. “It’s difficult to understand that you’re a refugee. That you are far away from home in a very different culture. That now you must rely on others. You wouldn’t want anyone to know what it feels like to be a refugee.”

Apart from fingerprinting, no procedures for their registration have begun to date.

“Modar needs to work. He has so much to offer. You should have seen the way he helps the children,” she said. “But we know that Holland is a small country and there are a large number of refugees. We know that we must wait.”

The two brothers and their sister have conflicted emotions about leaving Syria. “Happy to be here, not happy to be in a tent. Happy to be safe, but not happy that my country isn’t safe,” said Tamador.

“It was wise to come. My parents must follow us, but their only option is the same horrific journey. It makes me very sad that they must now experience the dangers and hardship we went through during those 21 days.”