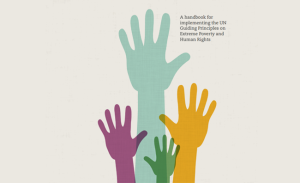 Pope Francis wrote in his encyclical letter, Laudato Sì, “For poor countries, the priorities must be to eliminate extreme poverty and to promote the social development of their people.”

Caritas works on poverty in its many forms around the world, giving material and especially spiritual help, but also advocating to change unjust systems which keep people in poverty.

Franciscans International and ATD Fourth World have produced a document called “Making Human Rights Work for People Living in Extreme Poverty: a Handbook for Implementing the UN Guiding Principles on Extreme Poverty and Human Rights” which Caritas Internationalis supports and will promote for use among its member organisations to eradicate extreme poverty at all levels.

The handbook translates the legal language of the United Nations Guiding Principles on Extreme Poverty and Human Rights and makes them more accessible to a wider audience so these global policy guidelines reach the grassroots and give people practical tools to reclaim and access their human rights  (eg. to adequate housing, food, education, access to health care and legal services, to mention but a few). The manual can be used by social workers, teachers, legal advisors, religious institutions, policy makers or anyone who works with people living in poverty to ensure that public policies reach the most vulnerable and marginalised of the society.

The preface to the 2012 document says, “In a world characterised by an unprecedented level of economic development, technological means and financial resources, that millions of persons are living in extreme poverty is a moral outrage. The present Guiding Principles are premised on the  understanding that eradicating extreme poverty is not only a moral duty but also a legal obligation under existing international human rights law.”

At the presentation, speaking of Caritas’ approach to poverty, Michel said, “Mercy cannot be considered as a weak approach to rights. Both are related – rights without love would be very dry, not contributing to building humanity in all its dimensions. Love without justice would be goodhearted for sure, but not transformative to the necessary point.”

The language of the handbook is simpler than the original principles and it offers concrete actions so that people in extreme poverty have greater access to their rights whether they be economic, social, cultural or civil and political. We see the handbook as being a useful tool for Caritas social workers who have contact with local or national authorities to ensure inclusion and effective participation of people living in poverty in policy and decision-making processes.

The handbook uses a rights-based approach and aims to empower people living in extreme poverty. People in poverty may not know their rights or how to access them because of lack of information, lack of contact with the right people, poor education or quite simply no internet.

The Guiding Principles give guidance to social workers on how to better understand the consequences of extreme poverty in terms of the human rights of people who are living in these conditions. By proposing concrete actions for people to reclaim their rights and thus promoting them as active agents of their own change the groundwork is laid for collective action to change unjust structures.

Caritas member organisations will have the opportunity to attend workshops organised by Franciscans International/ATD Fourth World in various parts of the world. The first will be in Senegal on 1-4 March.

The handbook can be accessed in Spanish, French and English here.