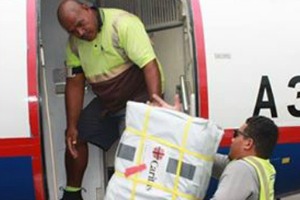 The impact of Cyclone Winston on Fiji has been severe as the Pacific nation was lashed with very destructive hurricane force winds Saturday gusting to 300 kilometers per hour.

The category five storm is thought to be the biggest to ever hit the Southern Hemisphere and has left a trail of destruction in its wake as it moves west away from Fiji. Houses and roads have been damaged in Fiji, flooding reported in low lying areas and coastal inundation likely.

Many cities are still without power and running water. Relief efforts are being complicated by poor communications.

The cyclone wreaked havoc in the Tongan islands of Vava’u and Ha’apai on Friday. More than 2500 people were evacuated.

Caritas are responding with emergency supplies in Tonga and are ready to respond as needed in Fiji as needs become clearer.

“Most of the villages along its path are completely destroyed with sea walls washed away. The most immediate needs would be tarpaulin, blankets, food, farming equipment and seedlings for vegetables,” he said, speaking from Suva.

Due the threat from climate change in Oceania region and to the increased risks from the current El Nino weather pattern, Caritas had already pre-positioned a large quantity of emergency supplies in Tonga. “Preparing communities to be first-responders in emergencies is a fundamental part of our humanitarian work, and makes a significant difference when natural disasters hit,” said Mark Mitchell, Senior Humanitarian Programmes Coordinator for Caritas Aotearoa New Zealand.