“Everyone is scared,” said Joan, a resident in one of the flash points of the Burundian capital, Bujumbura. “By 6pm, the shops are closed, the streets empty and we’re at home, hiding. We’re frightened because we’ve witnessed the killings.”

Burundi has been on edge since April 2015 when its president, Pierre Nkurunziza, decided to run for a controversial third term in office. The political drama sparked bloody street protests, a failed coup attempt and plunged the country into its worst crisis since the end of a civil war in 2003.

Clare is a 26 year old student who lives in Bujumbura with her younger sisters. “My two sisters and I were raised by our two elder brothers after our parents died in the 1990’s. Marcus, the eldest, had always been like a father to us.”

Marcus, 32, worked as a journalist for Radio Renaissance. He wasn’t political but his profession made him a target for repression in the wake of a crackdown on independent media last year. “I was worried that he might get caught up because of his job,” said Clare, “but Marcus didn’t want to leave Burundi. He didn’t want to leave us girls.” 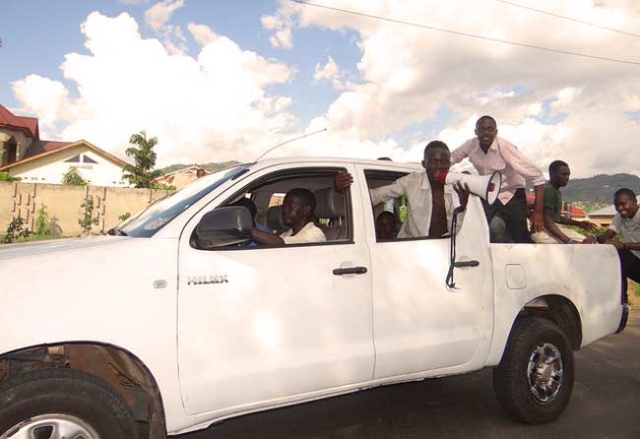 The political crisis in Burundi has caused an economic crisis and pushed people into poverty. Caritas Burundi is providing food, covering health costs and plans to scale up. Photo by Nicholson/Caritas

Marcus was taken into police custody in May in a roundup of journalists. He was badly injured during the arrest. “His leg was terrible. It had become infected. He couldn’t walk. He couldn’t get treatment. We were very worried for his safety.”

The election went ahead and the incumbent president won by a widely predicted landslide. The victory didn’t end the violence in Bujumbura, characterised by protests and a brutal response by the police, who went house to house looking for opposition activists.

“My other brother Eric was now looking after us,” said Clare. “One evening in October, armed men came into the house. He was eating dinner with the family. They shot him dead. He wasn’t involved in politics. He was just a bus driver.”

More than a quarter of a million people have fled their homes since the violence began, 240,000 of them as refugees in neighbouring countries Rwanda, Tanzania, Uganda and the Democratic Republic of Congo.

While staying with friends one night, their house was burned down. Then in December the dead body of their eldest brother Marcus was found.

“We had no home and no money. We lived in fear. Sometimes we could eat, sometimes we had nothing. Neighbours helped us when they could,” she said. “Somebody told us to come to Caritas. They helped us rent an apartment and gave us food.”

The international community’s response to the political crisis in Burundi has been to suspend development aid to the government. Burundi is one of the poorest countries in the world. It was ranked 184 in the last Human Development Index. A fifth of its national income comes from overseas aid, with agriculture and the health sector especially reliant on external support.

“With aid blocked and an economic crisis born of the political uncertainty, we have a humanitarian crisis,” said Abbé Jean Bosco Nintunze, secretary general of Caritas Burundi. “You see people forced to beg on the streets of Bujumbura, more unemployed, more empty businesses abandoned for better opportunities in Mozambique and Zambia”.

Jean, a widower with four children in Bujumbura, was beaten up in October on his way to Sunday Mass, but for him “the poverty is worse than the fear”.

“My eldest son Derrick was a member of the opposition party, working with young people. I didn’t mind because the opposition is mainstream ,” said Jean. “But when the protests started, the police targeted young men. He fled Burundi to Kenya in June.”

His son had qualified from high school and was the family breadwinner. “Now, we only eat once a day,” said his father. “Without Caritas Bujumbura, I couldn’t feed my family. Caritas provides rice, beans, oil. Without that help, I would be begging on the street.”

As well as provide food to vulnerable families, Caritas has helped cover hospitals fees for those in need. 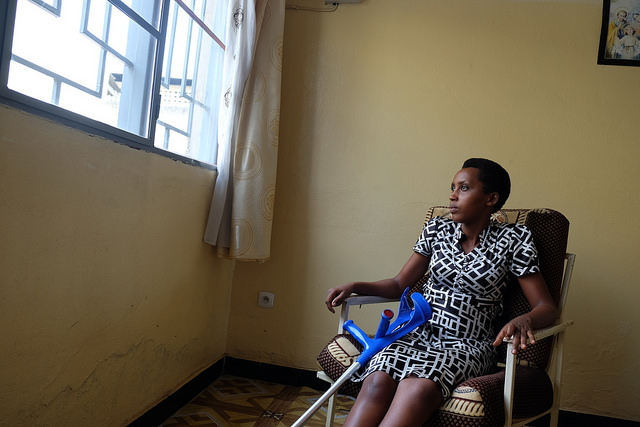 Delphine, 23, was about to start the next stage of her medical career at university when the political crisis hit. She lived with cousins and they asked her to take their children to Rwanda. Once there, she badly injured her leg. Without money for proper medical treatment, the injury got worse.

She returned to Bujumbura and went to the hospital for an operation. However, she couldn’t cover the cost. The hospital refused to let her leave. “Caritas ended up paying my bills,” she said. “Then they found me a place to convalesce.”

Caritas Burundi plans to scale up its response, supporting young men through farming, improving protection for the vulnerable and helping the Church’s network of medical centres. “Faced with the loss of life, the suffering and distress, the forced displacement of people and the economic impact, we need help,” said Bishop Bonaventure Nahimana of Rutana.

“We hope that the world will be a Good Samaritan to the vulnerable, the traumatised, the children who have seen such horror and the victims of violence,” he said at an international meeting of Caritas organisations 27-28 January in Bujumbura.

Caritas will also be working to build peace through national and international advocacy. It’s urging Caritas organisations around the world to speak with their own governments.

In a country that has suffered two genocides and a 13-year civil war in the past 50 years, Bishop Nahimana said bringing peace is vital.

“The crisis in Burundi is one of the most acute crises in the world,” he said. “Unless we act now, there is a heightened risk of genocide, of the fighting spreading to neighbouring countries and an apocalyptic displacement of people.”

Caritas and the Catholic Church in Burundi have denounced the violence and the violation of human rights. “All the sides of the conflict must get around the table to talk,” said the bishop. “They need to focus on our communal interests as Burundians rather than defend their own positions.

“We must speak with one voice to denounce the violence, the violation of human rights and the hatred. We call for dialogue, peace and reconciliation. Democracy and human rights can never be killed.”

All names of witnesses have been changed.