Hope with Caritas after escaping from trafficking

Hope Akioyamen, 18, was promised a bright future abroad by a family friend in early 2014. She’s from from Issua Esa in Nigeria. Her desire to travel and her dreams of a brighter future came from pressure by family members who wanted her to help lift them out of poverty.

Hope arranged to go abroad, where she would meet the daughter of a family. Before leaving she was asked to take two photos to a place that turned out to be a native doctor’s (voodoo priest’s) shrine. Three other girls about the same age already at the shrine when she arrived. They were told that they needed to be protected before they embarked on the journey hence the visit to the shrine.

“When I heard the voodoo priest chanting some incantations and also saw him inflicting cuts on the bodies of the other girls, I became really frightened. I saw the anguish of the other girls so I ran away,” said Hope. 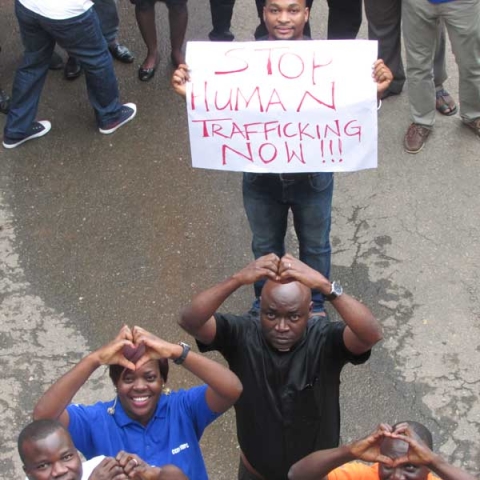 On getting home that day, she changed her mind about leaving and told her elder sister about all she had encountered. Her sister was very unhappy with her for having thrown away such a huge favour from someone who meant well for the family and this led to her being rejected in the family as she was now termed an enemy of progress.

Hope was later withdrawn from school due to this issue because they considered her as one who was lazy and unwilling to work to make a better living.

“Faced with this situation, I remembered the campaign against human trafficking that was conducted on the Feast Day of St. Bakhita by Justice Development and Peace/ Caritas in the Uromi Diocese. I went to see my neighbour who works there to see if they could assist me in any way” she said.

Caritas Nigeria has been encouraging parish priests to undertake awareness creation activities on the ills and dangers of human trafficking across 18 dioceses in Nigeria through strategic messaging on prevention, specifically on the St. Josephine Bahkita’s day, which is the Church’s International Prayer and Awareness Day Against Trafficking.

Based on the 2010 report of trafficked victims by the National Agency for the Prohibition of Trafficking in Persons, Edo State is considered the hub for trafficking in Nigeria in young people who are looking for greener pastures abroad.

According to Barr. Onome Oriakhi, Caritas Nigeria’s programme manager on Human Trafficking and Migration, says, “Many times, some of these victims, prefer to keep the identity of their traffickers secret due to the oath they claim to have taken before leaving the shores of Nigeria. Their traffickers usually frighten them with the possibility of them going mad if they ever try to reveal their identities. So some of them live in fear and we have to do a lot providing psychosocial support for them which takes a very long time,” she said.

“Most times the traffickers are even relatives of the victims and it is usually difficult to use law enforcement agencies to prosecute them because victims want to protect their families. We have had an instance where a trafficked young woman refused to reveal the identity of her trafficker stating that her mother was also involved and she didn’t want her mum to be punished because she meant well for her that was why she begged her brother to take her abroad. Another one said her sister reminded her that other young girls her age were making very good money selling their bodies abroad to support their families and also told her that after a few years she would gain her freedom from her ‘madam’ and also start her own trafficking ring,” added Barr. Onome.

In order to support these victims holistically, Caritas Nigeria collaborates and networks with otheragencies; and also works closely with the Committee for the Support of Dignity of Women (COSUDOW) on reintegration of trafficked victims in the shelter home managed by COSUDOW. So far, over 200 have been reintegrated by COSUDWO with Caritas Nigeria providing technical support. The reintegration package includes: Family tracing and re-union, airport pick-up, counselling which remains an ongoing process, rehabilitation and psychosocial support, business development; planning and support in setting up and running a business.

Hope has since been enrolled to learn some skills in interior decoration and hair styling as. She hopes set up a business, a place she can call her own someday so she can earn a living.

Caritas Nigeria plans to further support the JDPC to empower Hope economically and to ensure that she has the right support systems to adequately face challenges she may encounter. Hope will also be trained to serve as a change agent to enlighten her peers on the dangers of trafficking.