“We don’t have enough food. We have no other clothes. We can’t look after our hygiene,” said J, a 26 year-old Syrian stuck on the Greece-Macedonian border in Idomeni for 10 days.

As European borders go up, refugees and migrants are being left stranded and desperate.“There is no safe way to continue our journey. The border is almost closed for us fleeing war,” said J. “I feel hopeless. I just want to live normally again.”

In February, Austria said it would only accept a handful of asylum seekers and refugees a day, setting off a domino effect of borders being closed to the vast majority of those people fleeing war and poverty from the Middle East, Asia and Africa.

On 9 March, Slovenia and neighbouring Croatia refused to allow the transit of most refugees through their territory. Serbia and Macedonia say they will do the same. 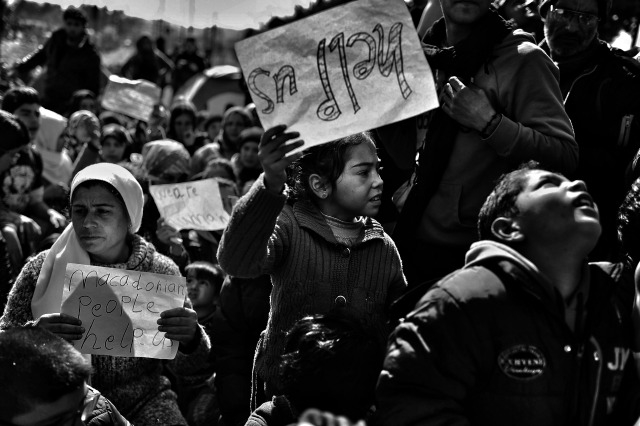 On the border between Greece and Macedonia. Photo by Maurizio Gjivovich

“The closing of the borders will not solve the problem, it’s just a partial solution, easier for some countries, but leaving a great burden for the others,” said Ana Zivkovic of Caritas Serbia.

The border restrictions haven’t stopped new arrivals to Greece, with thousands arriving each day on the outlying islands. Over 140,000 people have made the crossing across the Mediterranean from Turkey to Greece this year, following the one million who braved the deadly crossing in 2015.

Nine out of ten come from the top refugee producing countries in the world, like Syria, Iraq, Afghanistan and Eritrea. Over half of those making the crossing are women and children.

The decision to impose tighter border restrictions is effectively converting Greece into a refugee camp indefinitely. In Greece, in Idomeni and in Athens at Piraeus Port and Victoria Square, refugees and migrants are in need of humanitarian assistance . They have no or limited access to toilets, to medical services and to information and legal services.

In Idomeni, they’re sleeping in tents in fields. “It’s a very tense atmosphere. It’s cold, people are trying to find anything to make a fire and keep warm. There’s a lack of tents and warm food. Many families with children have been waiting for days at the border,” said Evelyn Karastamati, Emergency Coordinator in Caritas Hellas (Caritas Greece). 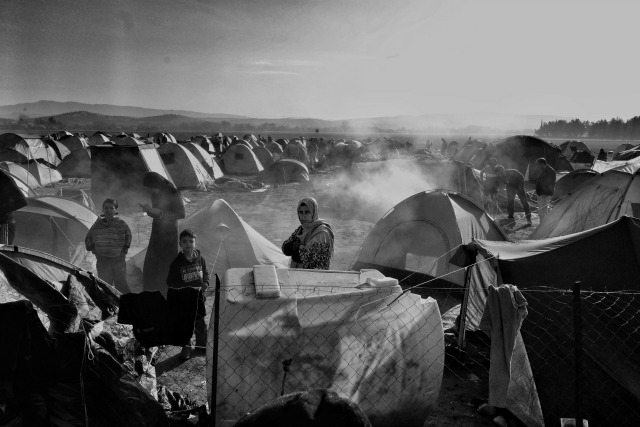 Over 14,000 people were stranded by 9 March at the Idomeni crossing. Photo by Maurizio Gjivovich

In Idomeni, Caritas will increase the number of chemical toilets, and its distribution of aid such as clothes, shoes and nappies, and provide additional food there and in Piraeus Port and Victoria Square in Athens.

Elsewhere along the European route, the tightening of frontiers could mean refugees and migrants are sent back along the journey they’ve just made. This reversal of the flow would add to the misery as numbers build up in transit points.

Already there is a group of around 600 people who were pushed back from Croatia and Slovenia and now stuck in Presevo on the Serbia-Macedonian border, and hundreds more are stuck in Belgrade and on the border crossing with Croatia.

Mujdah is a 15 year old girl coming from Kabul. She is travelling with her mother and her brother. The family is for now staying at the camp in Presevo, where they were returned to from Serbia’s border with Croatia.

“Since our father used to work for the Afghanistan army we were an easy target. Our older brother was kidnapped by fundamentalist militants,” she said. “The situation became unbearable, so we decided to leave Afghanistan on foot and have travelled a month and a half to get to Greece.”

As the influx of migrants in Slovenia has diminished, Caritas has been less involved in activities in transit camps. “We are focusing on integration due to increased number of asylum seekers in the last weeks,” said Danilo Jesenik of Caritas Slovenia. “We are ongoing to run three integration houses for immigrant families.” 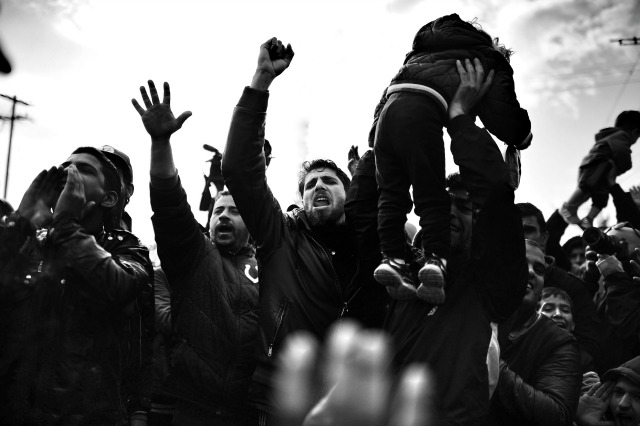 Tensions are growing at the Idomeni crossing. Photo by Maurizio Gjivovich

Caritas is urging all Europeans to show greater solidarity to Greece and to the refugees and migrants who have survived war, poverty and repression and to make greater efforts to lobby their governments for a political solution to this crisis.

“The failure of Member States to apply a comprehensive and humane approach to this situation is putting the EU’s credibility at stake. Greece, its people and all the migrants and refugees on its soil are paying a very high price,” says Caritas Europa.

Caritas Europa is urging EU governments to stick to its relocation pledges, cease plans to erect borders around Greece, address the causes of migration and enable more legal channels to the EU, reform its migration policy to suppress the rule of the first country of arrival and promote integration.