“We who have visited these people, have seen that these are not just refugees, these are human beings,” said Cardinal Luis Antonio Tagle, Caritas Internationalis President, on a visit to a Syrian refugee camp in the Bekaa valley in Lebanon, 28 February to 2 March. 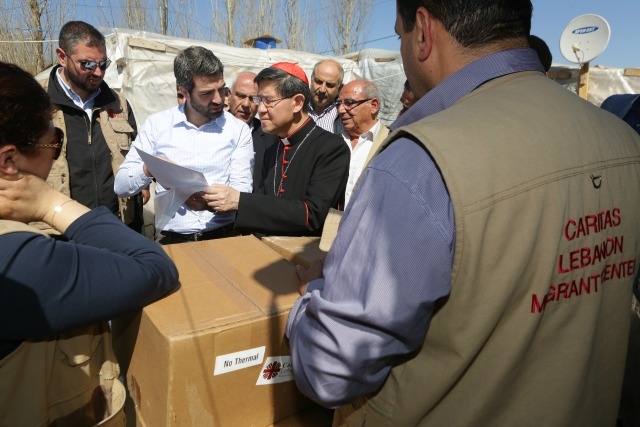 Cardinal Tagle on an aid distribution to a refugee camp in Lebanon’s Bekaa Valley. Credit: Caritas

Cardinal Tagle went to a medical clinic, a safe house, a school and saw distributions of aid to Syrian families living as refugees in Lebanon. One million Syrians are living in Lebanon, a country with a population of just below 4 million people.

Caritas Lebanon also prioritised support to education as an entire generation of Syrian children risks losing their schooling. Along with UNICEF, Caritas launched an outreach activity in order to target approximately 40,000 students from across Lebanon.

Cardinal Tagle spoke to one Syrian father in the refugee camp, who explained that of his eight children, only four can go to school because they can’t afford the transport. He can’t find regular work, only the occasional day in the fields.

“The aid just touches the basic minimum for a few days. Four boxes of towels, blankets, diapers. But how long will they last for a family of eight. For a few days, and then they’re back to nothing,” said Cardinal Tagle.

On his trip, Cardinal Tagle heard from refugees from Syria and Iraq on the reasons why they’d fled. The refugees told him how their homes had been destroyed, their relatives kidnapped and killed, themselves injured. 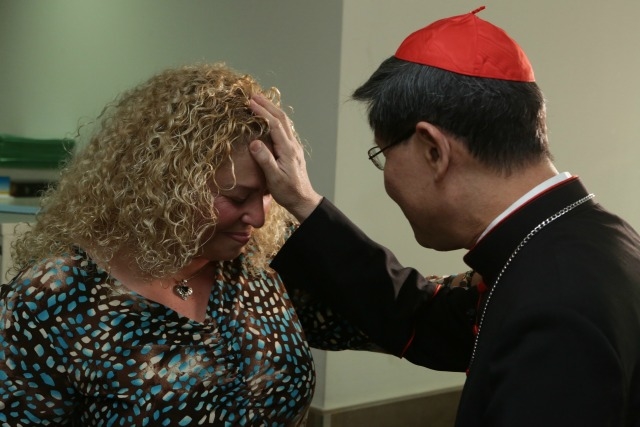 Nafwa is a mother receiving treatment in a Caritas clinic in Beirut. “Aleppo is a very dangerous city,” she said. “There was no electricity, no water and the food was very expensive. My child is traumatised by the bombing. His grandfather was killed two years ago by shrapnel . That’s why they decided to leave.”

In one safe house, Cardinal Tagle met an Iraqi Christian woman on the run with her two small children from her violent husband. Forced to leave her father’s home because he beat her, she had agreed to an arranged marriage to a Muslim man, whom she met only on their wedding day.

“It turned out that my husband had friends who were linked to terrorism. He had to flee to Turkey,” she said. “I was forced to give up my job as a computer scientist and join him with the children. After I arrived, I found out that he was in contact with ISIS. He threatened to send my son to an ISIS training camp. I realised that my husband could kill another person.”

She was kept captive in the house. “In the end I managed to get word through to my step-mother,” she said. “She came to Istanbul and we arranged my escape with the children when my husband was away from the house.”

Caritas Lebanon provides safe haven for women in danger.“Now I’m staying in a safe place,” she said. “I’m frightened because I know he is looking for me. But I know God will help me. I pray to God for my husband, that he can change his life.” 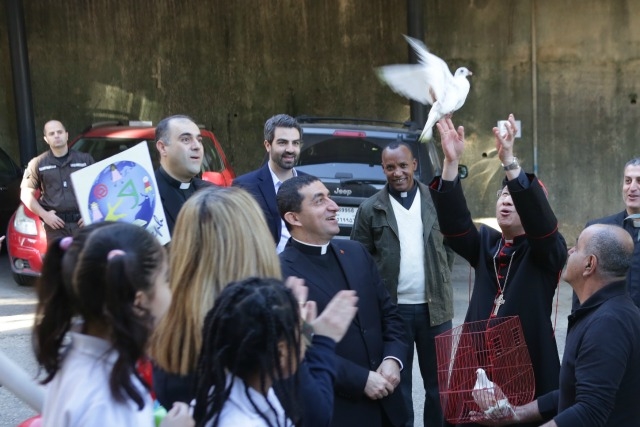 Caritas Internationalis is running a “Peace is Possible” campaign for Syria to end the world’s worst humanitarian crisis.“I don’t think that the poor hunger children in these camps can give us an account of causes of these conflicts,” said Cardinal Tagle. “In their names we are appealing to everyone, can we in a concerted effort work for peace in Syria.”

Caritas organisations are engaging the international community, governments, supporters, and all people of faith and of good will on the need to deliver peace, provide humanitarian aid and treat refugees in a dignified and humane way.

“I saw a lot of suffering but I also saw a lot of human dignity,” he said. “I saw a lot of altruism, the capacity to deny the self and to put the needs of others before one needs. The world has the secret of peace and reconciliation. We need to eleviate these gifts to the international level.”