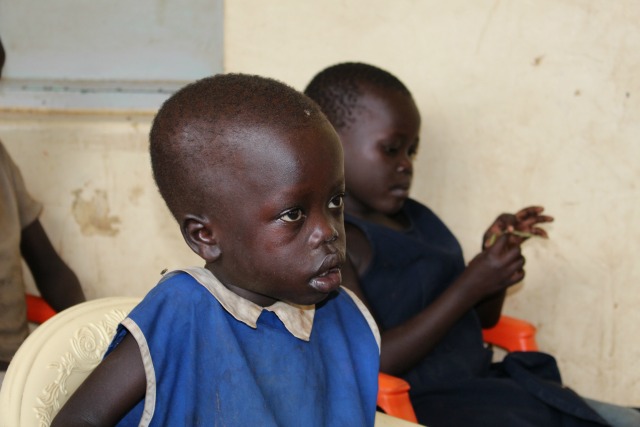 Millions of people in South Sudan are in desperate need of aid as the country faces its worst food crisis since independence in 2011. Caritas staff say the health risk to women, children and the elderly will intensify without greater humanitarian intervention.

Over 40,000 people in Unity State are threatened by famine as the lean season peaks in May. Around 2.8 million people in South Sudan are in need of aid – a quarter of the population.

Fr Jean Waweru is the director of the local Caritas office in Rumbek, which is one of the worst hit parts of the country.  “You can see the bones of the children protruding because they’re so skinny from a lack of food. They’re really suffering,” he said. “Last year the conflict along the border in the Upper Nile region meant animals and crops were destroyed and people were forced to run for their lives.”

The fighting in various areas and an escalating economic crisis are having devastating consequences on communities’ abilities to feed themselves. An increasing number of people are suffering more and more from serious health problems and malnutrition.

Gabriel Yai, director of Caritas South Sudan said, ““In the 21st Century people have nothing to eat, they do not have the means to buy food and they are dying from hunger. How can we be indifferent and leave them by the wayside?

“Most of these people, whether agriculturalists or pastoralists, do not have the means to make their livelihood. They are dependent on any kind of work in the city of Juba and the villages are totally dependent on food aid.”

Caritas launched an emergency appeal for funds early this year, aimed at helping almost 35,000 people suffering from hunger and the instability caused by the civil war.

Emergency programmes cover Juba, Rumbek, Tambura-Yambio, Yei and Malakal. They include the drilling of boreholes where there are water shortages; seed and tool distribution; promotion of health and hygiene and the provision of medicines. A number of Caritas organisations have on-going programmes

Beyond this year’s emergency programme, a number of Caritas member organisations – including CAFOD, Trocaire, Caritas Switzerland, Cordaid and CRS – are providing major support to Church and other partners’ programmes across South Sudan, which help people with shelter, food, and greater access to education, training and health.

Caritas is also working to improve unity in areas affected by the war through peace building and conflict resolution, the broadcasting of peace messages on local radio, sports and recreational activities and exchange visits between those displaced and those living outside the camps where they’re staying.

In Holy Week the suffering and the Passion of innocent civilians in South Sudan continues. Like Peter, who denied Christ three times, the world seems to have turned its back on the plight of the South Sudanese.

In our 21st century and in the world’s newest country people are dying of hunger because they have nothing to eat. We can blame cattle raids, the cost of food and the economic crisis and think that the crisis is out of our hands but it isn’t. This is all happening with what seems to be the total indifference of the local politicians and the international community.

In areas of South Sudan such as Amtong State, in the diocese of Torit, and in Renk Town there is fertile land. And yet in the diocese of Malakal, people are desperately hungry and Caritas has received reports of death from starvation.

In the diocese of Wau-Gogrial and Aweil areas people are fleeing and leaving the villages. Some refugees are even going back to Darfur due to the worsening situation. This shows just how bad things are if people choose to risk their lives by choosing to return to Darfur. But what choice do they have when things are so bad in South Sudan?

Pope Francis called us to be vigilant against the sin of indifference and act against it. In this week when we reflect on the Passion of Christ, in South Sudan we have a real example of His suffering. Our sisters and brothers are voiceless and dehumanised and their children live under the shadow of a preventable death.

With its limited means Caritas is working hard to offer universal solidarity towards those who are suffering. We provide food, water and we try to help people get back to good health. We have many other programmes but the crisis is massive. One quarter of the population is suffering in South Sudan. We need larger funds and greater support to offer them the solidarity they deserve.

How can we be indifferent and leave our South Sudanese sisters and brothers on their knees to face an avoidable death? They are suffering from a profound injustice. How can we give them the global compassion they deserve?