A roadmap for the future of children with HIV

Massive progress has been made in relation to  diagnosis and treatment of HIV, the virus that causes AIDS, since the early 1980s. In 2015, UNAIDS announced we reached the milestone of getting 15 million people on anti-retroviral treatment (ARVs).

Timely diagnosis and effective treatment mean that many people around the world are living with HIV rather than dying from it. However, only 42 percent of children with HIV were receiving ARVs in 2014.

Pregnant women are now diagnosed earlier and receive timely treatment. As a result there’s less mother-to-child-transmission. However, once women see that their children are born healthy, many may go off treatment and this leaves the child open to being infected with HIV through breastfeeding.

Caritas cares deeply about the fates of these children and we want them to have a fighting chance of living a long and healthy life. We have joined efforts with UNAIDS, the U.S. President’s Plan for AIDS Relief (PEPFAR) and the Vatican’s Paediatric Hospital Bambino Gesù to organise the conference ‘Strengthening the engagement of faith-based organisations in the early diagnosis and treatment for children living with HIV’. 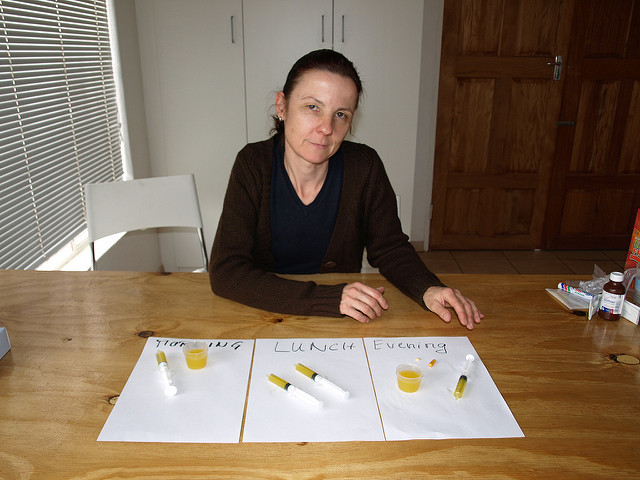 Dr Almud Pollmeier, a paediatrican at the Thabang Society near Johannesburg, explains what medication a child with HIV must take in a day. Photo by Caritas/Michelle Hough

One of the aims of our conference is to share information with grassroots Faith-Based Organisations so that more and promote or provide HIV testing for infants born to HIV-positive mothers and get infection children into treatment early.  Many FBOs are doing this already, but an  important global goal is to reach the point where there are no new HIV infections among children. Only by working together can that we end new HIV infections.

We really do believe it’s possible to  achieve this vision of no new HIV infections among children. We’ve been able to bring HIV rates down in a number of countries across the world. But there are still a number of countries where we need to make progress in reducing Mother-To-Child-Transmission.  It’s not just a case of improving care and treatment but also we need to tackle issues such as stigma and ensure men support mothers when they are on treatment so they continue to take it.

A greater number of medicines has become available for children living with HIV, but we still need greater research on more  child friendly formulas. One issue is that in some parts of the world, certain medicines require refrigeration. For families in low-income countries who barely have enough money for food or schooling, buying a refrigerator to keep HIV medicines in is simply beyond their means. And, those with refrigerators often experience problems with supply of electricity.

In a number of countries,  progress has been made  with the treatment and care of children living with HIV. One example is Swaziland. People from St Philips Mission will participate in our conference. They’ve done a great deal of outreach work in Swaziland. They look after not just people with HIV and TB (for which there is often co-infection for people who have HIV) but healthcare in general.

Helping  children live long and healthy lives in the context of HIV is important. In Vietnam, the Mai Tam Centre has initiated a transition centre for adolescents,  can acquire better skills to take care of themselves as they become adults.

There are still challenges in other countries. One example of a country where there could be more progress is Nigeria. It’s such a big country and quite complex. Cardinal John Onaiyekan of Abuja has been a champion for people living with HIV in Nigeria and,  during the conference, he will tell us more about the situation there.

Beyond the practical HIV programmes that Caritas and other faith-based organisations operate around the world, we reach out to governments and pharmaceutical firms to urge them to create affordable child-friendly medicines. We developed HAART for Children, a campaign which focuses specifically on creating broad access of child-friendly HIV and TB medicines.

The Holy See has played import role in advocating for the opening up of intellectual property so that affordable medicines are available to a greater number of people. This is a vital issue in saving the lives of children with HIV.

Throughout the  conference we plan to build the groundwork for a roadmap to improve the diagnosis and treatment of children with HIV. The UN goal is to end AIDS as a public health emergency by 2030. Caritas and Faith-Based Organisations from around the world are putting their hearts and minds into achieving this and ensuring that children living with HIV in 2015 are still healthy and strong when this goal is reached.