Level of damage in Ecuador overwhelming

In the town of Pedernales you can feel the destruction of the massive 7.8 magnitude earthquake that ravaged Ecuador with all five senses. When we arrived in Pedernales I was overwhelmed by the smell of decay that hovers in the town of 40,000. The sound of cranes scraping away debris kicked up so much dust like most others we wore surgical masks.

The town square is a surrealist landscape. Standing at the heart of the square, no matter which way you look, there are no buildings, save one on a corner, that are left standing. The chaos is so intense, the destruction so massive, I can only begin to imagine how terrifying it must have been to live through it. 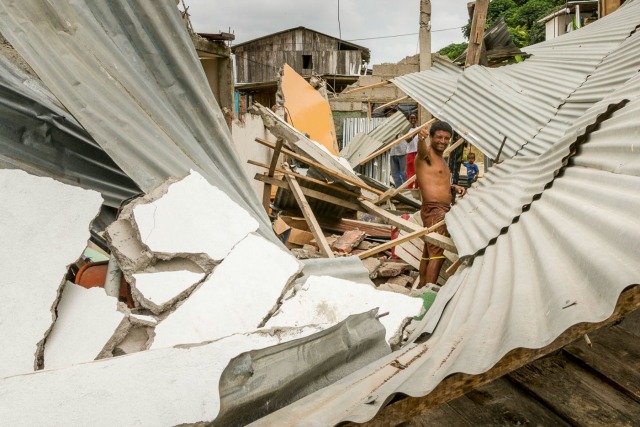 Caritas is responding to the earthquake with assessments and relief. Photo by Eduardo Naranjo for Catholic Relief Services

Sadly, most search and rescue missions have been called off. Crews are walking with dogs that sniff for a sign of life. When none is found they bring in the cranes to clear away the battered buildings. Three or four are working at a time, filling a constant file of dump trucks sent in to remove the rubble.

Most people have evacuated their homes and sought safety along the roads that lead into their towns and cities.  Many have done so because there is nothing left of their homes, while others fear that what remains of their home will topple in one of the numerous aftershocks still being felt. The outskirts of towns are absent of buildings and thus provide a sense of safety.

In a first wave of spontaneous solidarity ad hoc relief efforts from well-intentioned and concerned citizen groups and corporations have started. Trucks are arriving from the urban centers brining in food and other donated items. It’s a temporary solution and a needed one, but there are people falling through the cracks.

In the coming weeks Caritas Ecuador and Catholic Relief Services will begin distributing tarps and kits that might contain hygiene or cooking utensils. To make sure that the most vulnerable populations are reached people will be registered to help assess who is receiving assistance and who might still benefit.

Fortunately for the people of Ecuador there is a well-functioning infrastructure with the benefit of two separate ports. The roads themselves are damaged but they are not destroyed. As we drove along the coast we saw fissures in the road and areas where the road was buckled and warped, but fortunately the roads remain passable.

There is also a strong market structure in place this means that the possibility exists to rely on sourcing items locally. This would allow organizations to purchase at the local level helping boost trade and commerce and buoying the business of the local mom and pop shops that have long been community staples. 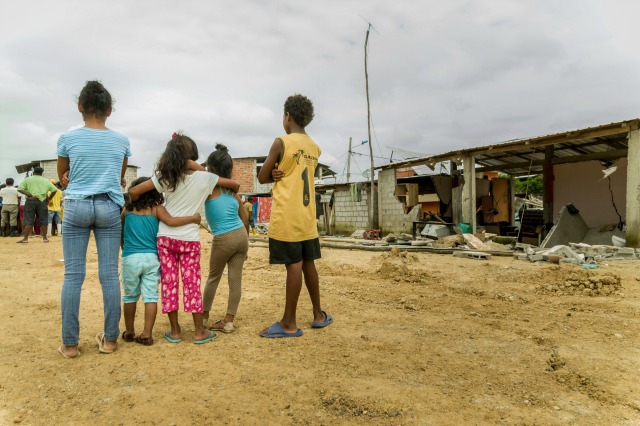 A 7.8 earthquake was the strongest in the country since 1979, it flattened buildings and buckled the highways along the country’s Pacific coast and killing hundreds. Photo by Eduardo Naranjo for Catholic Relief Services

In the coming weeks and months we’ll need to begin looking at longer-term shelter needs. It’s difficult when poverty had already driven people to live in precarious conditions.

We visited one community living on an island just a few kilometers from the earthquake’s epicenter of Muisne. When the earthquake struck it was low tide. When the buildings collapsed they fell on to the sand below. Had the tide been any higher small children might have fallen into water and been swept away. The only way to get on or off the island is by raft or ferry. It would be a death trap if a tsunami were to strike.  Rebuilding on the same island would be irresponsible. If a similar event happened they would all be in harms way. These are the types of factors that need to be considered.

We are now looking for possible sites were temporary housing can be set up. More than 23,500 were left homeless, but there are still many others whose homes have been damaged and it might not be safe for them to go back. That’s the big question: where will all these people be housed?

Ecuadorean president, Rafael Correa, estimates that the earthquake wrought $3 billion in damages. With that level of destruction it’s going to be a long time before the cities are rebuilt and people return to their homes. Agencies need to think about setting up camps and how to provide the basics: water, sanitation, and child-friendly areas. Once that has been accomplished the task will shift to providing temporary housing and eventually how to get people back into homes.

John Service is a Senior Technical Advisor for Operations on the Catholic Relief Services Humanitarian Response Department. He is currently part of a 12-person joint Caritas Ecuador and Mercy Corps team assessing the damage in Ecuador.