“You are not alone”: Pope Francis in Lesbos

“I was so happy Pope Francis came to this island,” said Afran, a Kurdish refugee from Syria staying with his family at a Caritas hotel on the Greek island of Lesbos. “He is a prophet of peace, a prophet of love.”

The pope met refugees on Lesbos Saturday 16 March. He travelled with Ecumenical Patriarch Bartholomew I, spiritual leader of the world’s Orthodox Christians, and Archbishop of Athens and All Greece Ieronymos II, head of the Church of Greece.

“This is a trip marked by sadness,” said Pope Francis, calling the crisis the “greatest humanitarian catastrophe since World War II”. Lesbos has been at the centre of a refugee and migrant influx that’s seen over a million people cross to Greece last year and 150,000 in 2016. Over 300 have died this year making the crossing. 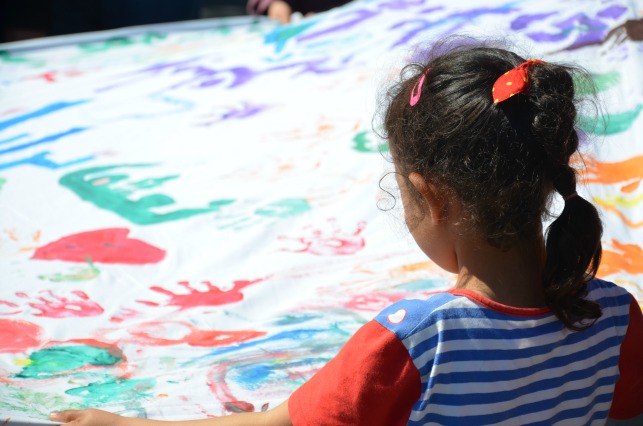 Making a banner for Pope Francis at the Caritas hotel for refugees and migrants. Credit: Caritas Hellas.

“Wake us from the slumber of our indifference,” Pope Francis prayed at memorial for those who’d lost their lives at sea, “open our eyes to their suffering and free us from the insensitivity born of world comfort and self-centredness.”

The joint trip comes shortly after the start of a European Union-Turkey deal under which any migrant arriving on Greek islands after 20 March will be detained and returned to Turkey unless they successfully apply for asylum in Greece.

“Only those who see the eyes of those small children that we met at the refugee camps will be able to immediately recognise, in its entirety, the ‘bankruptcy’ of humanity and solidarity that Europe has shown these last few years to these, and not only these, people,” said Archbishop of Athens Ieronymos.

“You are not alone,” said Pope Francis. The pope and the other Christian leaders met with hundreds of people at the Moira detention centre. It holds about 3,000 people. “As people of faith, we wish to join our voices on your behalf. Do not lose hope!” he said.

Pope Francis met with Caritas Hellas staff on Lesbos. They gave him a photo album, some children’s drawings and a bouquet of flowers all made by refugees staying at a Caritas-run hotel on the island. The hotel is for very vulnerable cases, such as pregnant women.

“The greatest gift we can offer one another is love,” said Pope Francis in the Moira camp. “We Christians love to tell the story of the good Samaritan, a foreigner who saw a man in need and immediately stopped to help. For us, it is a story of God’s mercy, which is meant for everyone.” 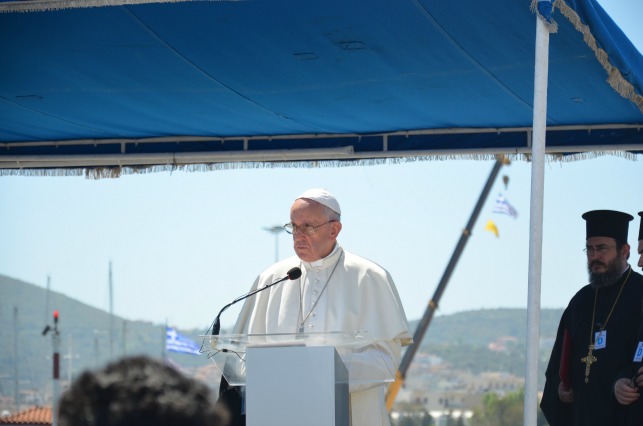 “As people of faith, we wish to join our voices on your behalf. Do not lose hope!” said Pope Francis to the refugees on Lesbos. Credit: Caritas Hellas.

For Afran, the Syrian refugee staying with Caritas, the visit of the pope was a symbol that they hadn’t been forgotten. “The way he walked among the refugees in the detention centre, the way he spoke to them, he made us so happy.”

Afran is from Kobane in Syria. Islamic State (ISIS) has attacked the city several times. “Nowhere is safe,” he said. “The city has been destroyed. ISIS has put bombs in the homes. We left when the terrorists started to kill people: women and children.”

Before the war, Afran was a teacher. He had an income, was engaged to be married and lived in community where he said, “Christians, Muslims, Arabs, Kurds didn’t use those labels. We were just neighbours.”

“A car bomb exploded. I was thrown across the ground. I woke up a few seconds later: people were burning, there were dead everywhere. 40 people died in the attack,” he said. “I’d been hit in the leg. The hospital didn’t have the surgeons to save it, so the doctors amputated my leg.”

He tried to break off his engagement. “I pleaded for her to leave me many times. But she refused. We’d dreamed of a big wedding party, but in the end it was small. There was fighting going in the city.”

When ISIS launched a major offensive, Afran and his family fled to the Turkish border.

“My brother carried me on his back the whole way,” he said. “It’s not easy to say goodbye to your home, your city, your country. You leave all your memories there, but now Kobane, is only bombs, death and ISIS.”

The family lived in Turkey for over a year. Afran paid for an artificial leg. They had a baby.

“Life in Turkey was hard. Sometimes we lived in a house, sometimes in tents on farms. If you didn’t work, you didn’t eat,” he said. “My wife and 16 year old sister had to work in the fields from 4am until 8pm for €6 a day. Sometimes they didn’t even get paid. Because you are Syrian, they abuse you.”

He said there was no future for the family in Turkey. “There is a lot of racism against Kurds. We were running from war. We didn’t feel safe,” he said. They decided to make what he called the “journey of death” to Europe. 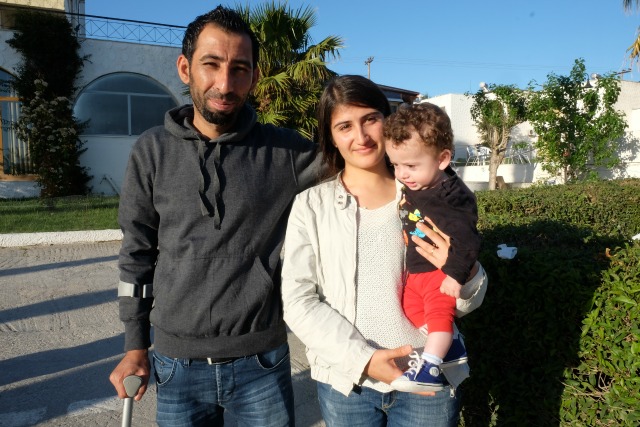 Afran and his family staying in the Caritas hotel on Lesbos. Credit: Patrick Nicholson/Caritas

“Finding a trafficker was as easy as walking down the street,” he said. “We stayed on the beach for 15 days waiting for the dinghy to Lesbos. It was cold and the baby became ill and had to go to hospital. I was so stressed I couldn’t eat.

“At 3am on 13 March, we took the small dinghy to Lesbos with 60 other people. Putting our 7 month old baby in the boat was like sending you child to the grave.”

Ten times they thought that they would drown. They were picked up by coastguards 4 hours later at sea. “The moment we arrived, we met great people. The coastguards, the aid workers and the people of Lesbos,” he said. “For the first time in a long time, we felt human.”

Now they’re staying at the Caritas hotel, waiting for their asylum request to be processed. They receive milk for the baby, a room, clothes, food and medical treatment.

The EU-Turkey deadline was 7 days after they’d arrived. “We didn’t know about the deadline,” said Afran. “After making that journey and to be sent back, it would be like humanity is reduced to nothing.”

Leonard Meachim teaches English at the Caritas hotel to the Syrians. He is a volunteer who moved from Liverpool to Lesbos 30 years ago where he lives with his Greek wife.

“When the boats began to arrive last year, we started with ad hoc distributions as community volunteers,” he said “Then Caritas Hellas helped us to organise regular distributions of sleeping bags and mats.

“We also went to the beaches to give out clothing and food. People would arrive exhausted, hungry and confused. We’d spend time with them. An Iraqi said to me that it’s impossible to imagine what it feels like to have a hand of friendship extended to you after the journey they’ve made.” 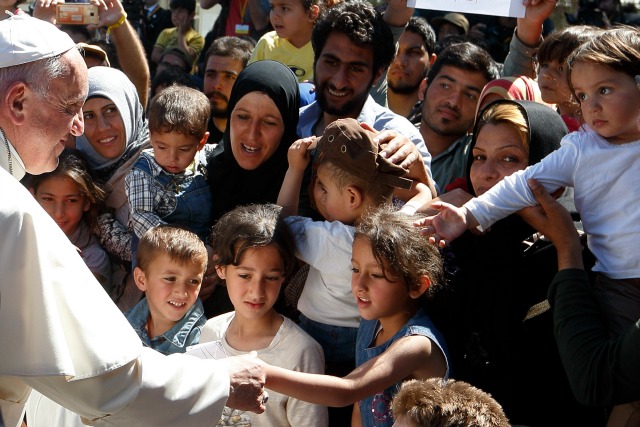 He has seen the crisis evolve from Greek communities coming together to help, to makeshift camps then to organised aid. “After the economic crisis, Greece was lost,” he said. “Seeing how the country has come together to help the refugees, we’ve found ourselves as a nation again.”

Now with the EU-Turkey deal to detention centres, “people are being traded: One Syrian here for another one in Turkey,” he said.

“From the beginning you see them as people like yourself. They’ve seen lots of tragedy. Children have seen things no child should ever see. They’ve seen their family members being killed and abused. Nobody makes the trip unless they absolutely have to,” he said.

“It’s a challenge to go to somebody you don’t know and offer them food. You go to them as fellow human beings. As Christians, we see Jesus in the person in need,” he said.“My life has been changed forever. It’s not a sacrifice. I’ve been enriched by the encounter.”

Tonia Patrikiadou, Caritas Hellas Field Manager for the Caritas run hotel on Lesbos said much is still to be done. “The hotel is still working. Many people are waiting for relocation or asylum. It will take a long time. The big challenge is to provide them with money so they can build a future.”

Pope Francis ended his visit by offering safe passage to Italy to 12 Syrians, half of them children, on board the papal plane. Quoting Blessed Mother Theresa, he said, “It’s a drop of water in the sea. But after this drop, the sea will never be the same…it’s a small gesture. But these are small gestures that all men and women must do to give a hand to those in need.”