Pope Francis has asked that Catholic parishes throughout Europe take up a special collection 24 April for humanitarian aid for Ukraine. A 2-year-old war in Ukraine has left thousands dead and forced millions from their homes.

In March 2014, Russia annexed the Crimea region of Ukraine, and about a month later, fighting began along Ukraine’s eastern border between pro-Russian separatists and government forces.

Since the crisis began, Caritas in Ukraine has helped more than 260,000 people affected by the war with money to buy food, hygiene products and medicine, to repair their homes, prepare for winter, with counselling and legal aid. 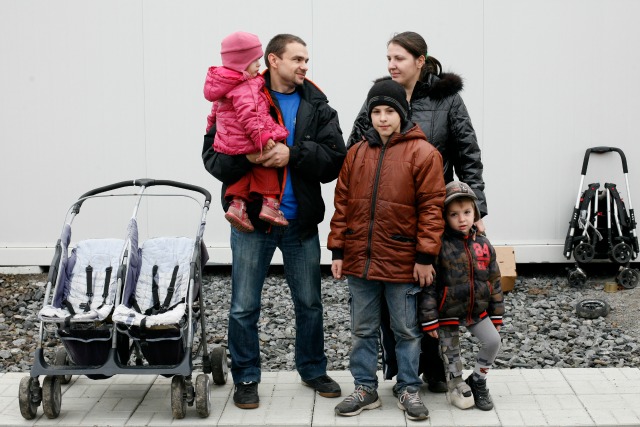 Alexander Ortynskiy with three of his six children at the Modular Village. Credit: Matthieu Alexandre/Caritas

Alexander Ortynskiy had a small print business in Luhansk. When war came in June 2014, he was quick to evacuate his six children and his wife. He stayed behind to protect his office.“Finally I had to leave. I took one of the last trains out of Luhansk,” he said. “It was difficult to leave a business I’d built with my own hands. Now everything is gone”.

He thought the conflict would be over quickly, “just a battle between criminal gangs,” but that was two years ago. Since then they’ve moved around. For a while they lived on the floor of a tourist information office. Then in a cold, derelict house in a rural village.

He worked the whole time cutting down trees, collecting firewood, working in kitchen gardens. “When you have 6 children, you can’t afford not to work,” he said. One of their children is also physically disabled and needs medical treatment.

Then they found out about a “Modular Town”, a facility built by the government with foreign aid. It’s made up of concrete annexes. “It’s much better. It has modern facilities. It’s in Kharkiv City, so better for work.”

Ortynskiy registered for humanitarian assistance with Caritas, which supports large families with aid.“But I didn’t want to just receive, I wanted to give,” he said. So he volunteered, and now has got a job with Caritas.

“It ties in with my own Christian mission – I try to help people even if it is just offering advice,” he said. “It’s very important not to get stuck in your own problems. You have to keep moving to overcome obstacles.”

Ira Kalinina’s family was on the first holiday they’d taken in 5 years when fighting broke out in their home town of Donetsk. They couldn’t return and were left stranded with only the bags they’d packed for their trip. 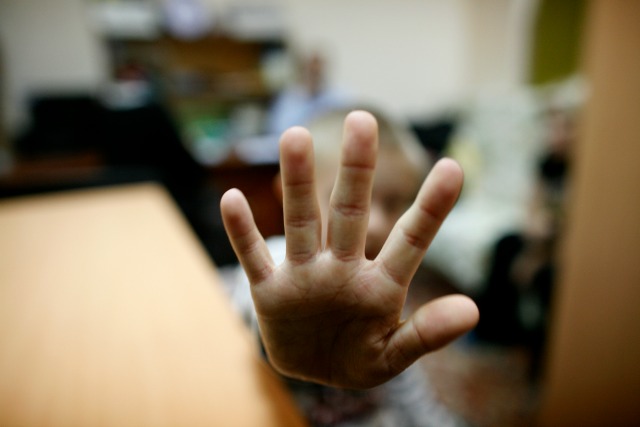 Vanya has down syndrome. He had no interaction with other children and he was not improving his communication skills when the family were stuck in a remote area. Now in the community centre he has lots of friends. Credit: Matthieu Alexandre/Caritas

At the start they were left isolated in the countryside, but then they received a place in a community centre in Kharkiv. Vanya, her youngest child, has down syndrome. “We were in an remote village before. Vanya had no interaction with other children and he couldn’t improve his communication skills,” she said.

Once in Kharkiv, her husband could find work so she could stay at home with Vanya. “We haven’t found a school for him yet, but he is learning lots and has many friends here in the centre,” she said.

The boy has medical problems and needs surgery, but it’s too far and expensive to get to the hospital by taxi. Caritas provided the family with cash for food.

Anatloy Korbelyak, a social worker for Caritas Ukraine, said, “When the conflict began, they didn’t expect that it would last so long. So they only brought summer clothes. One young woman we met couldn’t send her children to school because they didn’t have warm clothes.

“With the Caritas money, they could buy clothes, she could go out to work and they could restart their lives. It’s made a huge difference.”

Often people who are used to having a job, housing, social status and material wealth, find themselves without any means in a new environment, among strangers. Their disappointment increases even more when they encounter rejection, misunderstanding and social exclusion.

Caritas Ukraine has worked to ensure that those people forced from their homes are accepted in their new communities. With the war showing no signs of a resolution, integrating communities is vital. It can be as simple as hosting cinema nights for both resident and new families.

Nina Serdyuk is one success story. She was nine months pregnant when they moved from Donetsk to Kharkiv in July 2012. Two weeks later, she gave birth to Vlad. 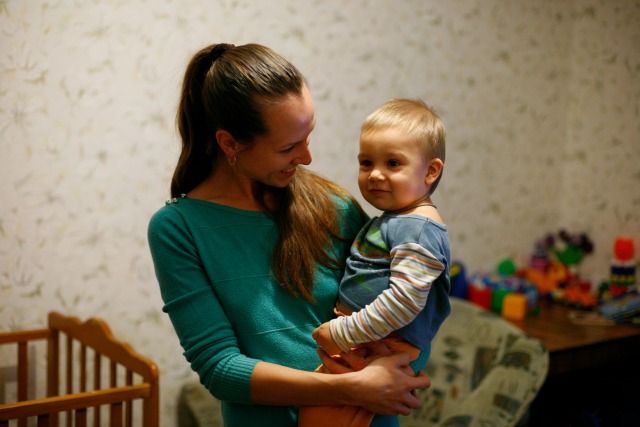 Nina Serdyuk and Vlad have made a fresh start. Credit: Matthieu Alexandre/Caritas

“We had reached a point where we could stay no longer. The fighting was too much.” she said. “It was very difficult to flee. We were very afraid. I was so heavily pregnant that I didn’t think that I would get to the train station.”

Caritas covers their basic needs. Her husband has found a job. Her new neighbours have warmly welcomed them. “People are really sympathetic to us,” she said.

Giving people a new start will be key to Caritas relief efforts as the emergency turns form relief to recovery for some, while maintain humanitarian assistance to communities on the front line.