Tents and rescue boats needed in Ecuador after quake 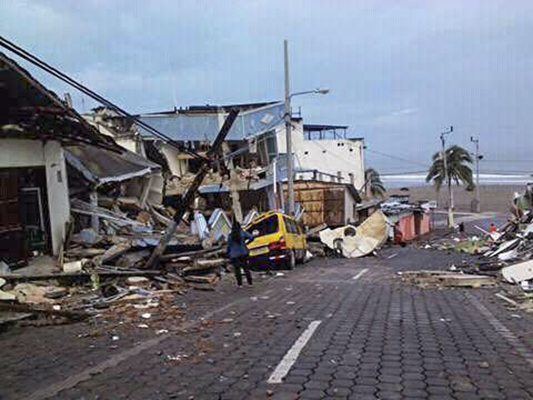 A 7.8 earthquake hit the near the town of Portoviejo, Ecuador, on Sunday April 17, 2016. it’s the strongest in the country since 1979, it flattened buildings and buckled the highways along the country’s Pacific coast and killing hundreds. Photo by Alexandra Moncada/Catholic Relief Services

Caritas Ecuador president, Msgr. Walter Heras, calls on Caritas around the world to support the current relief efforts in the aftermath of a 7.8 magnitude earthquake that rocked the nation last Saturday.

The quake that left more than 2,500 injured and an estimated 350 dead ripped apart cities and severed access to remote coastal towns. The death toll is expected to climb as rescue workers pick through the rubble. A state of emergency has been declared in six provinces and 10,000 troops and 3,500 police have been deployed to assist the most affected areas.

“Of most immediate concern is rescuing victims,” said Msgr. Heras. “The time when the earthquake took place was when most people were at home. There are a lot of people trapped and are awaiting rescue. We are also concerned about the most remote areas that are difficult to reach.”

“This was a province with many rural areas,” said Daniela Andrade, Caritas Ecuador Communication Coordinator. “The most remote parishes were very affected. Many of them have no resources or basic services. They lack infrastructure.”

A united front made up of local and international Caritas agencies is needed to provide long term assistance as the communities move from recovery to rebuilding their devastated communities.

“In the emergency zones we are seeing people who have evacuated their homes and are sleeping in the streets,” said Andrade. “People need tents and inflatable boats because some of the affected areas cannot be reached as the roads are destroyed.”

Heavy rains were already showing a rise in cases of vector-borne diseases such as chikungunya and dengue. These are expected to rise along with other infectious diseases in the earthquake’s aftermath. Hygiene and sanitation are of utmost importance in the coming weeks.

While Caritas Ecuador joins national efforts to reach immediate needs of displaced and affected populations it plans on assisting communities long after the earthquake falls off the international radar.

“As a Church we accompany the affected,” said Msgr. Heras. “We see that all our sister organisations are added to our efforts in accompanying the people. After the initial shock people will remain depressed. They will need to rebuild … to move forward in their lives. These are people who have lost their businesses and their homes. They have lost everything. Caritas can help fill this void that remains in people.”

”We know that as a Church we are one entity,” Msgr. Heras said. “The Church never asks people to wait. We are hoping for the assistance of the Church and call on churches from around the world to assist us in our efforts. We need all of you. There is so much to do. We thank everyone who adds their support to this response.”