Laudato Si’ – one year on

If I had to sum up Laudato Si’ in one word, it would be interconnection.  It is an invitation to heal the broken connections between God, humankind and the planet. It is a call to arms to fight for global unity at the most profound level.

Pope Francis’ plan for achieving his vision in Laudato Si’ is “renewal” – in short a rebirth of our way of seeing ourselves and the world and also of our commitment to love and care for the world, the other and ourselves.

Caritas has heard Pope Francis’ call and answered his challenge with a concrete plan of action. Our global confederation’s long-term strategic vision launched last year is “One Human Family, Caring for Creation”. 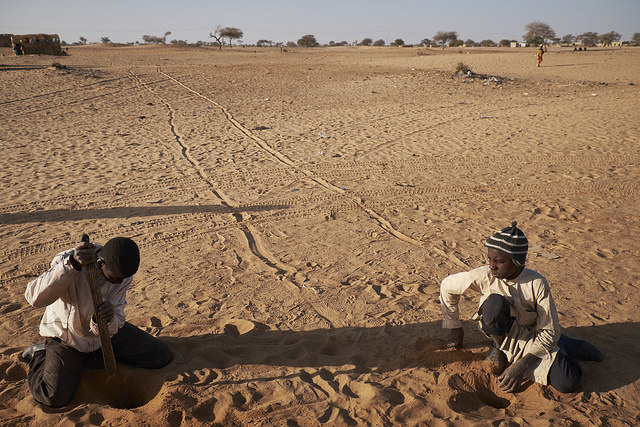 Two brothers dig holes in the sand for a shelter at a camp of displaced people in the neighbourhood of Chateau, Diffa, Niger on February 12, 2016. Photo by Sam Phelps/Caritas

Over the past year, Laudato Si’ has been “wind in the sails” of Caritas’ fight and against poverty and injustice on every level.

Inspired by Pope Francis’ words regarding the “need to respect the rights of peoples and cultures”, we  have increased our commitment within REPAM (Pan-Amazonian Ecclesial Network) along with other Church organisations and contributed to the creation of a human rights school for community leaders in the Amazon.

Pope Francis’ emphasis on educating people in ecological citizenship has been heeded by many Caritas organisations across the world with the creation of films, reflections for schools , reports and also quizzes.

Laudato Si’ encourages our work on environmental issues that devastate the lives of the poor such as fracking, coal mining, food waste and climate change.

Pope  Francis’ encyclical is revolutionary as it challenges accepted ways of thinking and of organising the world. Caritas has taken it as an an opportunity to influence people to act and support the causes we stand for.

In short Laudato Si’ has renewed the energies that Caritas dedicates to being activists and advocates for the poor.

The success of Laudato Si’  rests not only on our actions and consciousness, but also on healing the spiritual bonds between ourselves, God and the world. Caritas organisations offer a wealth of materials to promote reflection of Laudato Si’ on a deeper level.

In the words of Pope Francis, “ There can be no renewal of our relationship with nature without a renewal of humanity itself.” (LS.118)

Caritas has started this process of rebirth and we are inviting all of you to join us on our journey.