Raising the voices of #YoungCaritas to fight injustice

By Daniel Hale, head of campaigns at CAFOD 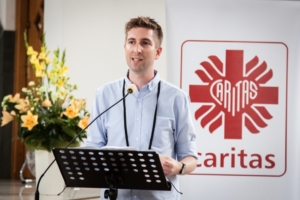 The power of #YoungCaritas lies in their ability to speak out against injustice. This is what Daniel told a gathering of young people at World Youth Day 2016 in Krakow, Poland.

Many of the world’s decisions are made in places like London, Brussels, New York and Washington, far away from the communities they affect.

In 2009, I travelled to Honduras where I visited a community of the Siria Valley. Their water was being poisoned by open-cast gold mining. It was through this community that I discovered just how powerful each of us can be.

Open-cast gold mining, if you don’t know, is a very nasty business. To extract the gold from the rock they use arsenic, which is discarded in vast lakes of toxic water. The community was badly affected: their water was poisoned, their animals died and people were moved from the land they knew.

The community was protesting at the badly planned closure of the San Martin gold mine, owned by a UK-listed company.

They were organised and active. They were working hard to use the law, politics and protest to get the company to do the right thing and close the mine properly.

But the levers the community needed were simply not available in the Siria Valley. The real power to get the company to behave was in the UK through our laws and our consumer pressure.

Living in the UK meant I had a voice denied to the people in Honduras. That realisation spurred me to dedicate my life to the struggles of others.

Pope Francis has said he wants a Church which is poor and for the poor. He said they can teach us and ‘we are called to find Christ in them, to lend our voice to their causes, but also to be their friends, to listen to them, to speak for them’.

But we must listen and we must act. Our sisters and brothers living in poverty don’t have the power to do it alone – and they shouldn’t have to.

That’s a message not lost on the young people on England and Wales. Our commitment to a just world, free from poverty, in which all can live a life of dignity, is amazing.

I am immensely privileged to be Head of Campaigns at CAFOD. And every day I get emails telling me what young people just like us have been doing to bring about God’s kingdom.

At school and then at university I volunteered with CAFOD working alongside other young people as they lend their voices to those around the world seeking justice, peace and the care of creation.

We are sharing what we’re learning with our peers in our schools, churches and universities. We are using the power of social media. We are using media to show others what we are doing. We are meeting our MPs and we are writing to ministers to demand action.

All of this helps. All of this overcomes the “globalisation of indifference” that Pope Francis warns us against. But the action of young people does more than that, it shows to our world run by adults that we won’t stand by while:

Our neighbours’ rights are abused
Our politics are bought and sold
Our common home is destroyed
Our faith is laughed at for being irrelevant
Our time is now. Our planet and its people face monumental challenges.

Migration tears families apart and visits death on the waves of the Mediterranean and the roads of Central America.

Wars without end devastate whole countries, robbing young people of their futures and leaving people with only their hope and clinging to dignity.

Climate change which, in a just a few seasons, throws into reverse the gains in development that have taken half a century to make.

Think about that for a second: we are the first generation in history to truly understand climate change, and the last generation which has a chance to do anything about it.

But the other night at the Opening Mass at World Youth Day I was reminded by our extraordinary power, our huge number and our unwavering faith – anything is possible for us.

So this is our task, and it is an urgent one: to open our eyes and read the ‘signs of the times’; to see our world through the eyes of faith, our Gospel values and the life of Christ; and to stand together across borders and cultures to act for the kingdom here on Earth.

Friends, let us work together – our time is now. Let us use our power for God’s planet and his people.