Caritas Syria on frontline in Hassakeh 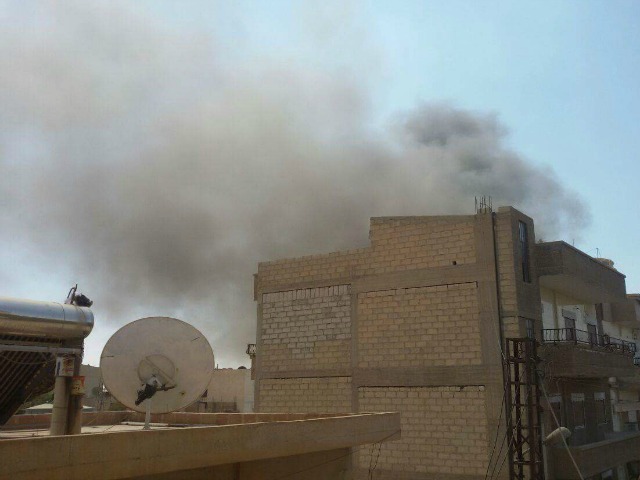 “I can’t forget the sound of shooting mixed with the sound of children singing in a nearby school. Their teachers maybe were making them sing to distract their attention from the gun shots outside.”

Case worker Samar Kajo had just fled to a colleague’s apartment from the Caritas office in the Syrian city of Hassakeh as heavy clashes broke out. Kurdish YPG militia had launched a major assault 16 August against the government-controlled parts of city. The Caritas office was on the frontline.

“We started hearing heavy shooting. The people receiving our help at the office ran,” said Kajo. “My father and brother came to bring me home, but it was dangerous to go out. Instead, we moved to my colleague’s apartment close to Caritas Office.

“There we were with her family in a corridor for a long time. During these dark hours I was thinking all the time of my sick mother. She was alone at home, waiting for us to come back. The shooting stopped for a while. It gave us enough time to reach home safely. I will never forget her hysterical tears when she saw us.”

Hassakeh is divided into zones of Kurdish and Syrian government control. The fighting marked the most violent confrontation between the Kurdish YPG militia and the Syrian Army in more than five years of civil war. Thousands of civilians fled to the countryside as the fighting intensified.

“This time was very tough on all of us,” said Michel Tamras, a Caritas Syria case workers in Hassakeh. He has been forced from his home many times in the last five years. The shooting led to a general curfew. We started to run out of food and the electricity was cut. The worst was when we lost the water supply after the main pipe that feeds the city was damaged in the bombing.

“The clashes continued for days. There was sometimes a ceasefire. It allowed many people to leave. After about 10 km, we reached the highway where we fond transportation to go to safer neighbouring cities. It’s like a cat that holds kittens in its mouths to move them from a place to another, looking for a safe place.”

On 23 August, the Syrian Army and Kurdish forces agreed to a ceasefire in Hassakeh. People started to go back to their city to check on their properties and belongings.

Michel Tamras said, “The first thing I did was to make a tour in the empty streets of the city. I wonder how a small city could bear all that pain. What broke my heart the most was the looted and empty houses and shops. The city looks like it came out of a long war and not just eight days of fighting.

“All the water pipes are damaged. The Red Crescent and Water Institution teams are fixing them. Most of the big generators that we depend on to buy electricity are damaged. I think we will need long time to have power back.”

Shaker from the office in nearby Kamishli said, “All of the Caritas team who stayed in the city or left are safe. Most have slightly or completely damaged houses. Thank God our office in Hassakeh has no damage. A lot of neighbouring apartments were hit by mortars.

“The huge need in the city now is to help people to do maintenance work to their apartments. Providing water tanks is vital as more than 80 percent of the water tanks in the city are damaged.”

What future for Hassakeh

This is the second time that the people of Hassakeh were forced to leave. The first was when ISIS forces captured a part of the city in June 2015. “I hope that the future will be better. We can’t stand to face such a hard experience again,” Samar said.

Hassakeh was as ethnically mixed city, including Christians. “The big majority of Christians have left and the rest are waiting to sell their properties to move somewhere else, whether inside or outside the country,” said Tsolair Gaspar, a case worker in Hassakeh.

Caritas Hassakeh provids vulnerable Syrians of every faith with access to medical treatment, covering expenses for surgery, tests and x-rays, as well vouchers for food, clothes, school stationary for children and rent support.

For more on the work of Caritas in campaigning for peace in Syria please visit the Peace is Possible website.