Violence at the hands of her own relatives meant Elvine Kouatchou saw no choice but to leave Bafoussam, Cameroon, where she grew up. Her parents were no longer alive but her grandfather had left her quite a bit of money.

“We always travelled by night and we changed driver and car at each border. It was like that for eight days,” she said. 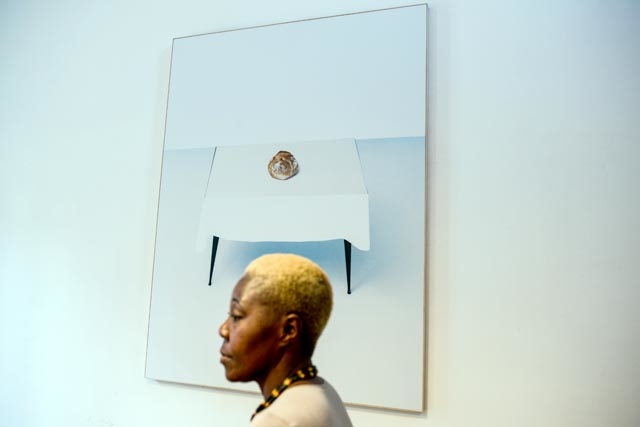 Once Elvine arrived in Tripoli she found that the family friend had plans for her. She said she’d take care of putting her money in the bank and then she took her documents off her and took her to a big farm house where she put her to work.

“She betrayed my trust. She knew what I’d been through and I really thought she wanted to help me. I ended up becoming a slave for her though – cleaning the house at all hours, covered from head to foot because the woman and man were Muslim. I worked for no money. They only gave me bread and milk. I thought about escaping – but to where? There was just desert all around,” said Elvine.

After a year Elvine got sick because of her ill-treatment. At that point, the woman decided to get rid of her. She put her in a wheelbarrow and asked a farmer to get rid of her somewhere along the coast.

“I had a high fever and I was only partly conscious. I’ve no idea how much time passed as I lay there on the coast. I even thought about throwing myself in the sea, but I found the strength not to by praying,” said Elvine.

Eventually,  a man appeared on the beach. He spoke Arabic and English and he picked Elvine up and took her to a house where lots more Africans were to be found. She spent a night there and found herself in handcuffs. Then she found herself being herded into a dinghy full of people.

At the wheel of the dinghy was the same man who’d rescued her from the beach. He turned out to be a traffkicker. Elvine couldn’t understand why he took her without her being able to pay. She suspected he’d done it to sell her into prostitution.

“I still have no idea who this man was, why he helped me or what he wanted from me,” said Elvine.

The Italian navy came to the rescue of the over-crowded dinghy near the Italian island of Lampedusa. This was in September 2015. In October, the group was transferred to Sicily and then on to Milan where the Red Cross assisted them initially.

At this point Elvine is assigned a place at the Casa Suraya, a centre run by the Farsi Prossimo cooperative of Caritas Ambrosiana (Caritas Milan). Casa Suraya offers emergency help to refugee families. This includes food, lodging, clothes, as well as legal, bureaucratic and medical assistance. It was through Casa Suraya that Elvine got a humanitarian visa for six months.

Now Elvine lives in a flat with three other African women in the Milanese parish of  Santa Maria del Suffragio. She receives help from Caritas Ambrosiana and attends a cooking course through them. She’s still waiting to see if she can stay in Italy long-term or not.

«I haven’t got my documents yet and I don’t know if or when this will happen,” says Elvine. “All I’ve got is my story to tell and the strength and determination which brought me here.”