Saying no to human trafficking 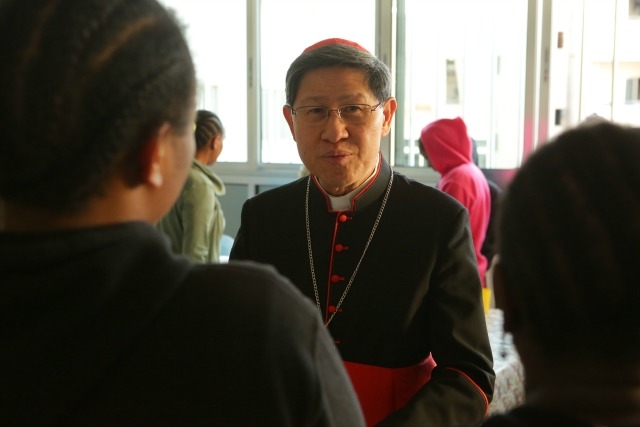 Cardinal Luis Tagle, president of Caritas Internationalis, met with trafficking survivors from Africa earlier in the year on a visit to the Middle East. Credit: Caritas

Child prostitution and human trafficking aren’t things that spring to mind when I think of Glasgow, Scotland. But that’s what a journalist contacted me about at work last week – trafficking from Slovakia to Glasgow.

Now I’m in Abjua, Nigeria, with over 130 human trafficking experts and people from Caritas and other faith organisations for our conference One Human Family, One Voice, No Human Trafficking (5-7 September). It was organised with the Vatican’s Pontifical Council for Migrants.

By some coincidence I’ve found myself sharing a room with Caritas Slovakia’s trafficking coordinator Anna Bartosova. She told me that the UK is the top country to which people are trafficked from Slovakia.

“Girls are forced into prostitution and sham marriages, men are pushed into forced labour and begging,” she said. “The people we work with were mostly vulnerable when they were trafficked: homeless, single women with children, disabled, young people from children’s homes.”

Prof. Joy Ngozi Ezeilo, former Special Rapporteur on Trafficking, told the conference on the first morning, “The scale of trafficking is huge. People have a desire to improve their lives. I say trafficking is migration gone wrong.”

Cardinal Luis Tagle, president of Caritas Internationalis, said in his speech to participants, “Slavery starts when people do not respect their own humanity, their bodies and their spiritual potential. They see themselves and consequently other persons as mere instruments or objects to attain some goal, especially money, profit, influence or power.”

Trafficking victims are “hiding in plain sight” in countries around the world. They’re men working to pick Europe’s strawberries in hot houses in southern Spain for little pay and no rights. Women tricked into prostitution and walking the streets of towns and cities around the world. Thai fishermen who’re kept in cages on boats without pay and often without food so they can catch fish that ends up being served in the world’s restaurants.

Fr Bruno Ciceri from the Apostleship of the Sea said, “You can buy tins of tuna which says it was caught without hurting dolphins or turtles – but what about the fishermen?”

In Rome, where I live, roads leading out of the city are dotted with mainly African women waiting to get into cars that stop. Fr Evaristus Bassey, CEO of Caritas Nigeria said that 80 percent of Nigerian women who go to Italy do so as a result of sex trafficking.

Nkese Udongwo from Caritas Nigeria said, “Those trafficked are members of our communities, parishes and sometimes even families.”

People have come to the conference from 43 countries around the world. A number of them have spoken of their grassroots’ experiences. One of the key aims of our conference is to unite forces within the Catholic Church and with other faith-inspired and civil society organisations in Africa with leaders and officials working on the issue to better combat trafficking.

A number of the speakers at the conference identified poverty as a key factor in pushing people into trafficking. Tackling this root cause is essential to reducing the vulnerability of people to trafficking. Education and reducing inequality are strategic areas which should be focused on. The implementation of the Sustainable Development Goals is seen as vital to combating trafficking.

One thing has been made clear during the conference – human trafficking is a crime that can’t be eradicated by one government or institution or organisation alone. Traffickers are organised and coordinated in their systematic abuse of the world’s most vulnerable people. It’s time that governments, civil society and the churchs of all types and on all levels followed this example of organisation and coordination.

“One victim is one victim too many,” said the UK’s Anti-slavery commissioner, Kevin Hyland, in his address at the conference.

Pope Francis has made important steps to uniting those whose work touches on trafficking. He’s established the Santa Marta Group, which brings together police chiefs and bishops with civil society organisations to prevent human trafficking and modern slavery, and he’s invited judges from across the world to the Vatican to discuss trafficking and other issues.

As Cardinal Tagle said to us all, it’s great that we’re all uniting as “one voice” at our conference, but he longs for the day when he’s invited to a conference to celebrate the eradication of trafficking.

“Where little effort is being done to combat human trafficking, let us take the lead and encourage governments to adopt anti-trafficking legislation and structures,” said the cardinal. “Let us act as ‘one human family with one voice’ and let’s say no to human trafficking.”