World Food Day: Food for All?

World Food Day this 16 October reminds the world again of the imperative to free humanity from hunger. Yet, today’s reality leaves us with a sense of deep discouragement.

Hunger is endemic in Zimbabwe. It’s one of several countries in southern Africa to be affected by El Niño. The abnormal weather has caused 21 million people to go hungry.

The food crisis began in Zimbabwe as a result of two failed harvests following poor or late rains. Drought and hunger have affected most rural families there. The number of rural homes without enough food in the most drought-affected areas has gone up from 30 percent in June to 79 percent in August. Over 4.5 million people will need food aid by the end of the year when the so-called lean season starts. 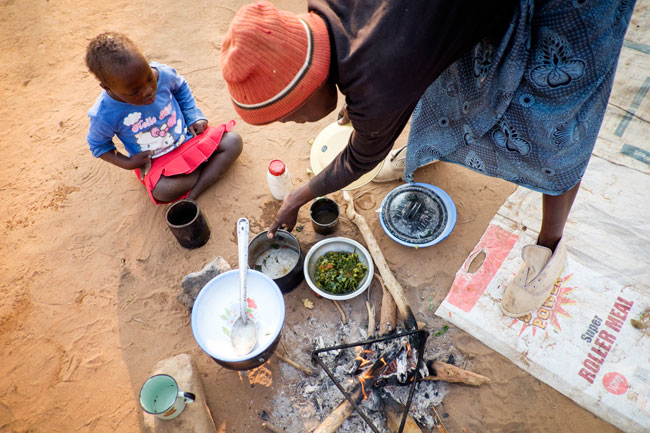 Grandmother Beauty (52) is preparing porridge for her grandchildren. Omega (7) is watching. The food crisis began in Zimbabwe early in the year after two failed harvests following poor or late rains. Photo by Isabel Corthier/Caritas Belgium

Hurricane Matthew has left the impoverished island of Haiti with a new food crisis. Vegetation and soil have been washed away. Livestock and wild animals have died. The disaster is not only humanitarian, but also ecological. The sun is already hitting hard. A severe drought is feared in the months ahead.

Caritas distributes food such as rice, beans, maize under its programme “Food for the Poor”. This will not suffice in the long run. An advanced state of food insecurity is expected. So are riots among exasperated communities.

Both food crises are consequences of extreme weather. Climate change is producing terrible effects on the world’s population, the poorest are suffering the most.

Strong political action is necessary to shift away from emergency measures. We need to tackle the structural causes of food insecurity, malnutrition and hunger.

“Climate is changing. Food and agriculture must change too” has been chosen by the UN FAO as the theme of World Food Day 2016. The international community needs to reform food systems under a new vision of the universal human right to adequate food.

Political will and policy coherence are needed to end hunger. In a world of plenty, the existence of malnutrition is a scandal.

“Zero Hunger” is the challenge addressed by the UN Secretary General to governments and other stakeholders. It is a call to end hunger in our lifetime. It has been renewed under the 2030 Agenda. There is great urgency to transform agriculture and food systems towards more sustainable, climate-resilient and human rights-oriented models.

Faith-based organisations responded to this challenge in a ceremony held on 21 September during the UN General Assembly’s High Level Week in New York.

In the name of “Breaking Bread” they marked the role of faith communities in alleviating hunger with the directors of FAO, WFP and IFAD. Together, they stated a joint commitment to accelerate progress towards SDG 2. The motivation is the conviction that achieving zero hunger is feasible in our lifetime.

Caritas Internationalis continues to promote “Food for All”. We urge the international community to reflect on what prevents everyone in the world from enjoying the right to adequate food.