“Faced with the suffering of refugees and forced migrants, we cannot remain indifferent,” said Latin American bishop and voice for social justice, Msgr. Álvaro Ramazzini. On the eve of presenting at the Human Rights Council 35th Session in Geneva on 15 June, the bishop has spoken out strongly about the refugee and forced migration crisis in Central America. 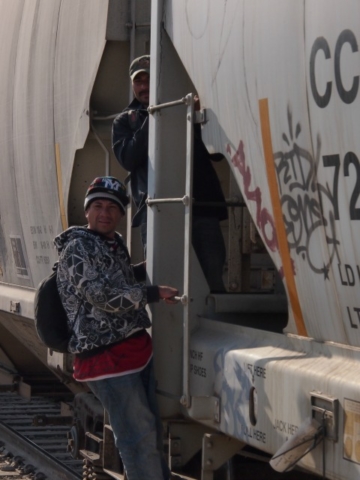 Latest figures show there are 1.35 million Salvadorans, 928,000 Guatemalans and 600,000 Hondurans living in the US, over half of them undocumented (International Organisation for Migration). These figures do not include those arrested at the border, those deported – and the many thousands who die en route. Ryan Worms/Caritas

“People must have a right to migrate when their very lives are at stake, when their own country does not provide them with their basic right to live a dignified life in accordance with their intrinsic value as a human person,” said Msgr. Ramazzini.

“A human being is worth more than money or than the international politics of countries who are only interested in their protecting own wellbeing. I feel outrage when I consider that the poverty of so many people in Guatemala is the result of an unjust economic system. It must be reformed.”

Diocese on the frontline of people smuggling

The bishop works at the frontline of the crisis in the Northern Triangle of Central America. His diocese of Huehuetenango lies at the border of Guatemala and Mexico. Desperate people arriving daily trying to make the long and dangerous journey northwards.

“Huehuetenango is a migration corridor for those trying to get to North America,” he said. “Most are brought through by coyotes (people smugglers). This opens up huge opportunities for human trafficking, and for the recruitment of migrants by drug traffickers. There are also many cases in which people are leaving because of extortion threats from the so-called maras or street gangs.”

The Northern Triangle – Honduras, Guatemala and El Salvador – faces a serious security and forced displacement crisis, owing to extreme levels of violence coupled with acute poverty. The UNHCR estimates that 500,000 people per year are moving through the Central American migration corridor on their way to Mexico, the US and Canada. It is one of the most dangerous regions on earth outside an official war zone.

Of special concern are the thousands of unaccompanied children and adolescents moving along the route. Faced with sexual violence, disappearances, forced recruitment into street gangs, and trafficking of girls and women, many have no choice but to join the weary exodus of those travelling north. The bishop speaks of the countless teenagers who have had one or both parents leave for the US during their childhood and now want to try and join their mothers and fathers.

“Families here are split up, and although many do receive money from remittances sent back from the US, the impact on the life of children and adolescents is extremely negative, since they are left isolated and very vulnerable to bad influences. This situation is deeply serious,” said Msgr. Ramazzini, “because of the sheer numbers of minors, the uncertainty over whether they will or won’t be deported, the trauma and danger suffered on the journey, especially by girls, and finally because of the loss of all these people who could have been our citizens of the future.”

Both as a bishop in the field and as president of the Guatemalan Bishops’ Conference organisation for the pastoral care for migrants, Pastoral de la Movilidad Humana, Msgr Ramazzini will demand protection and respect for the human rights of refugees and migrants, in a side event co-sponsored by Caritas Internationalis at the Human Rights Council session.

“Their migration must be planned, regulated and safe. Equally, people should have the right not to migrate and to be provided with conditions in which to live a dignified, peaceful and secure life in their own homes.” said Msgr. Ramazzini

Church in solidarity with refugees and forced migrants

In response to the crisis the Conference of Latin American Bishops (CELAM) in March set up a network to coordinate the efforts of the many faith organisations working with migrants across the continent. The CLAMOR network, of which Caritas and the diocese of Huehuetenango are members, aims to protect the rights of migrants, refugees, displaced people and victims of human trafficking.

Msgr Ramazzini said, “I do feel hope when I see how people keep on fighting for their survival. But I also feel sorrow when I see the acute poverty and insecurity of their situation. We need global solidarity if we want societies that are more fully human. True happiness is to be found in giving ourselves to others, especially the poorest and most excluded.”