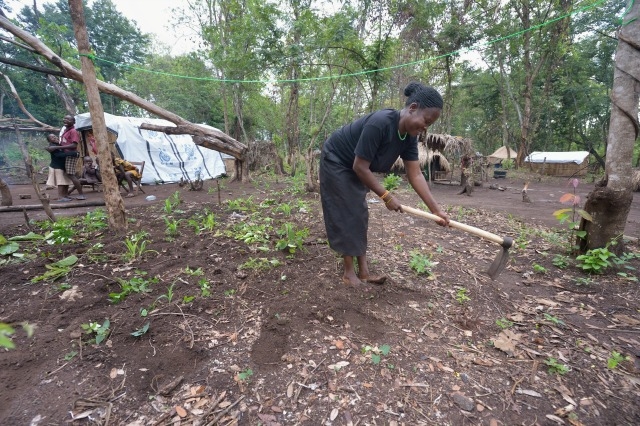 Preparing to plant corn, Jos Mitchell digs the ground around her family’s shelter in a camp for more than 5,000 displaced people in Riimenze, in South Sudan’s Gbudwe State, what was formerly Western Equatoria. Two Catholic groups, Caritas Austria and Solidarity with South Sudan, have played key roles in assuring that the displaced families here have food, shelter and water. Credit: Paul Jeffrey/Caritas

The Vatican announced a donation from Pope Francis to Caritas for its work in South Sudan, along with support to two other Catholic groups working in the country.

South Sudan has been declared free of famine, but almost 2 million people are on the brink of starvation and an estimated 6 million people will face extreme food insecurity in the coming weeks, according to reports by the government and the United Nations.

Somalia, Ethiopia, Kenya and Uganda are all affected by a food crisis in the region, while Yemen and Nigeria face famine unless urgent action is taken. Drought, economic collapse and conflict are driving hunger in South Sudan.

“Caritas has donated us seeds and tools so now I’m optimistic that in the days ahead I will no longer have to survive on the wild potatoes (very hard, taking 2 days to cook), instead I will be harvesting maize, sorghum, groundnuts and okra,” said a teenage mother in Torit, who benefited from a Caritas distribution Tuesday.

At a press conference on Wednesday in the Vatican, Cardinal Peter Turkson, prefect of the Dicastery for Promoting Integral Human Development, said that Pope Francis “feels the pressing need to raise awareness among the international community of this silent drama, calling for greater and renewed efforts to reach a peaceful solution to the conflict.

“The Holy Father does not forget the unheard and silent victims of this bloody and inhuman conflict, and he does not forget all those people who are forced to flee their native country as a result of abuse, injustice and war.”

Caritas Internationalis Secretary General Michel Roy said that Pope Francis was signalling that much more needs to be done to end the suffering in South Sudan. “The world needs to follow the example of Pope Francis and not abandon South Sudan,” said Michel Roy.

The Caritas Internationalis Secretary General said that there needs to be increased humanitarian support. The UN currently has received only half the funding it needs for its response plan.

In South Sudan, Caritas is already financing 70 projects aimed at helping more than 480,000 beneficiaries. More than $US12 million or 42 percent of the funding provided by Caritas and its agencies in South Sudan is being spent on emergency assistance programmes.