Caritas is concerned about the worsening humanitarian crisis in Venezuela and the severe impact it is having on thousands of men, women and children and their ability to survive.

Escalating violence and poverty have forced thousands of Venezuelans to cross the border every day and flee to neighbouring Colombia where they also live in dire conditions.

“The majority of people do not have access to adequate food,” said Tkalec, who visited Venezuela and Colombia in July to assess the situation. 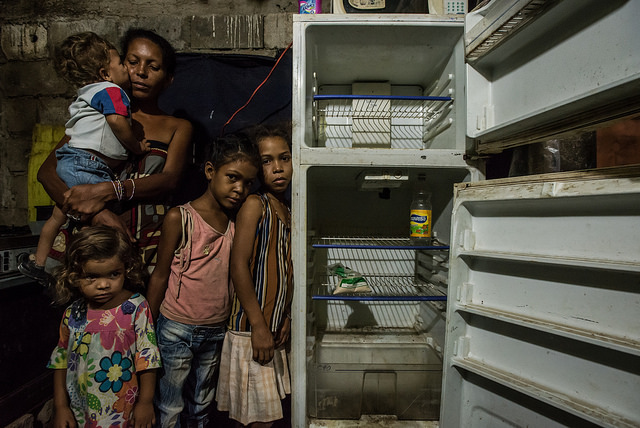 Leidy Cordova, a 37-year-old mother, poses for a portrait with her four children. The entire family went the entire day without eating. Inside their home, a broken refrigerator was empty except for half a bag of corn flour and a bottle of vinegar. “My kids tell me they’re hungry,” said Ms. Cordova as her family looked on. “And I all can say to them is to grin and bear it.” Photo by Caritas

“To purchase the minimum monthly food basket you need 12 basic salaries. Food is available in the stores, but the prices are unaffordable for the vast majority. It is common to see people on the streets in Caracas rummaging in garbage to find something to eat.”

Tkalec said Venezuela is only producing 30 percent of the food it requires and rampant inflation is driving prices to exhorbitant levels, making it even harder for people to buy food for their families.

Caritas says child malnutrition in parts of Venezuela has now reached a crisis. With the economy in freefall, shortages of food and medicine and soaring food prices, more than half of the country’s children under five in areas monitored by Caritas are suffering from some degree of malnutrition.

“Rates of malnutrition are on the rise and 54 percent of children have a certain level of nutritional deficiency,” Tkalec said.

Pope Francis recently expressed profound concern over the deteriorating situation in Venezuela and the rising number of people who have been killed, wounded or imprisoned by the government. The Vatican has appealed to all parties to end the violence and urged the Maduro administration to respect human rights while promoting peace and reconciliation.

The country’s health system is close to collapse. The crisis has led to critical shortages of drugs and rise in chronic diseases as well as malaria and diphtheria because there are no vaccines in the country.

“Health is the most heavily impacted sector,” said Tkalec. According to Medicos por la Salud, a local health NGO that collaborates with Caritas Venezuela, only 38 percent of essential drugs included in the WHO list exist in Venezuela and only 30 percent of drugs for basic infectious diseases are available in public hospitals.

Cases of diabetes have increased by 95 percent and hypertension by 92 percent in 2017 due to drug shortages. The incidence of post-natal mortality has tripled in 2017 while 114.000 people living with HIV/AIDS do not have access to essential drugs.

Caritas Venezuela has launched a programme to support food, water, health and nutrition for children under the age of 5 and has appealed for urgent donations to support the programme.

Caritas volunteers are supporting community soup kitchens in various Catholic dioceses across the country to provide meals to the most vulnerable.

As the situation worsens in Venezuela thousands are fleeing violence and persecution and crossing the border into Colombia. Government sources estimate more than 60,000 cross the border between the two countries every day and the government appears unable to cope with the influx.

Caritas is concerned about their living conditions and the lack of security for men, women and unaccompanied children who may be forced into prostitution or armed groups.

CLAMOR, the Latin American network set up by Catholic organisations to support migrants, deplores the fact that many Venezuelan migrants, largely undocumented, are victims of trafficking, sexual slavery and labour exploitation.

“Given this serious situation, we support the measures taken by the governments of Brazil, Chile, Peru and more recently Colombia, which promote work placement for Venezuelan migrants.

“However, we are concerned about the attitude of various goverments that have not yet adopted a public welcome policy, given the magnitude of the humanitarian crisis that is affecting our brothers and sisters.”

Azuaje said the current situation, which puts at risk the lives and dignity of Venezuelans, had forced thousands of people to leave the country, in a diaspora that is unprecedented in the country’s democratic history.

“We pray that the humanitarian crisis that is devastating Venezuela, and especially the poorest, may be overcome,” he said.