The statistics are sadly familiar. War in Syria has caused a mass exodus from the country of nearly 5 million people. Other wars and poverty in the Middle East, Africa and Asia are adding to this global humanitarian emergency. While sea crossings into Europe are down from their peak of 1.2 million in 2015, they have nevertheless reached 119,000 by mid August this year. Clearly the crisis continues, but its changing nature demands a constantly developing response.

From the very onset of the crisis in summer 2015, Caritas field workers and volunteers moved into action along the south-east European transit routes and in destination countries, helping refugees and migrants meet their most pressing needs. In Greece, Croatia, Serbia and Macedonia, exhausted people found warm food, clean clothes and administrative help. Most of all, they found human warmth. 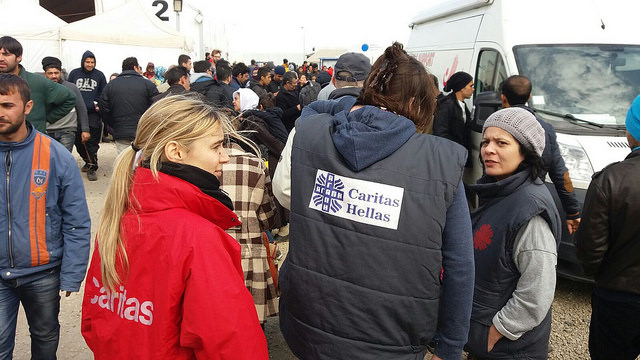 The crackdown across south-eastern Europe has left thousands stuck in basic transit camps. In Greece in Idomeni , they are in need of humanitarian assistance . They have no or limited access to toilets, to medical services and to information and legal services.
In Idomeni, Caritas will increase the number of chemical toilets, and its distribution of aid such as food,clothes, shoes and nappies, Photo by Sieger/Caritas Austria

“We are proud as a team to recall the countless smiles and transformations within our walls,” says Chloe Tsernovitch, field worker at a Caritas protection shelter on the small Greek island of Lesvos. She can easily list statistics of the 8,500 people who have stayed at the shelter to date, but for her the greatest achievement is expressed in human terms:

“The biggest indication of success has been to keep in contact with families who have long since passed through our doors, and hear… their memories of being met with respect and feeling safe during one of the most vulnerable times in their lives.”

Through these close personal bonds, Caritas staff are able to listen attentively to the needs of the refugees and adapt projects accordingly, for which they have been commended by government and international agencies. Caritas has in fact emerged as one of the leading NGOs in the crisis.

“We want to give people back control over their lives.”

In Lesvos, Chloe and the Caritas team saw that particularly vulnerable people needed extra care away from rough camp conditions. So they set up a protection shelter in a hotel building, with hot meals, psychological support, legal and medical help as well as creative play for children. As time has moved on, centres like this that once housed refugees and migrants for only a day or two have now become extended stay refuges supporting people as they apply for permanent placements in new countries.

“We want to give people back control over their lives,” says Chloe. “I believe that this project has been a great success and I’m so proud to have been a part of it and seen how we can change it and adjust it for the different needs of the population.”

In Athens too, many adjustments have been made by the Caritas team as they develop their emergency work into systems that meet longer-term requirements, now European borders have closed and refugees cannot transit onwards without papers. The necessity to get people into decent housing while awaiting asylum has grown from one renovated building to 14 shelters across the city, where families live in clean rooms with shared kitchens, and receive a range of services and educational activities.

“The most important thing is to embrace these people, because they have lost everything,” explains Nikos Voutsinos, Chair of Caritas Athens. “Here they find a warm environment, somebody to advise them, somebody to take care [of them] if they are sick.”

One shelter houses 120 Kurdish Yazidis, none of whom can read or write. Their need for guidance as they prepare for a new life in Europe is great, so trust is essential, especially given the persecution and discrimination they have suffered. One family describes the trust they place in their social worker Babis Papagiannopolous, saying simply: “He is always by our side.”

For his part, Babis is just happy to see what a difference the shelter is making. “They say that they feel comfortable here – they feel like they are at home. The only thing they want is safety.”

Caritas teams dealing with the European refugee crisis for over two years now are constantly innovating. In two Serbian camps, for example, Caritas staff have brought in a catering enterprise employing 20 vulnerable women such as victims of violence to provide hot meals for 1200 refugees and migrants daily. This bolsters the local community alongside the welfare of new arrivals. “My relationship with the refugees is like dealing with my own people,” says baker Natasja Stojanovich. “We are like family.”

“Caritas is helping us not to have negative thoughts.”

Back on Lesvos, the Caritas team observed that while various agencies were focusing on vulnerable groups such as unaccompanied children, no-one was really helping men, many of whom were deeply traumatised. “Some men told us that because they don’t have anything to do, they keep thinking of what has happened back in their country,” says social worker Eirini. After consulting refugees, the team created a community centre where men could meet, play chess or football, have focus discussions, and study.

It seems simple, yet the psychological benefits of having space to share issues or just relax for a while are profound, as one man said: “Caritas is helping us not to have negative thoughts, and to be occupied.” Being involved in meaningful activity has also reduced quarrelling between different nationalities. “It takes their mind off their problems,” says Eirini. “They feel less depressed… they can express their needs amongst other friends they make in the centre.” The team like the idea so much that they suggest it as a model for replicating elsewhere.

Projects like this carried out by Caritas staff and volunteers show that above all, finding warmth and friendship is the first step to recovering some kind of normality for people who have lost so much. It is this that marks out the Caritas approach.

And it is not just the refugees who benefit. Nikos Voutsinos of Caritas Athens talks about how his own life has changed. “I used to work long hours as a senior executive,” he explains. “I will confess that the budget of the whole project when I first started here was my annual salary…” He stops, overwhelmed. “I was spoiled,” he says with humility. “If we can take apart egoism and selfishness and look to love and serve others, as the Pope says, then it’s a better life for everybody.”