“I cried when Pope Francis hugged me today.  I felt him give me strength and a sense of belonging.”

The three young African men cut striking figures under the sunny bright blue morning sky in St. Peter’s Square in Rome. They walked tall and proud, showing off maybe a little bit, in their Caritas campaign T-shirts, their smiles big and their enthusiasm for life huge. 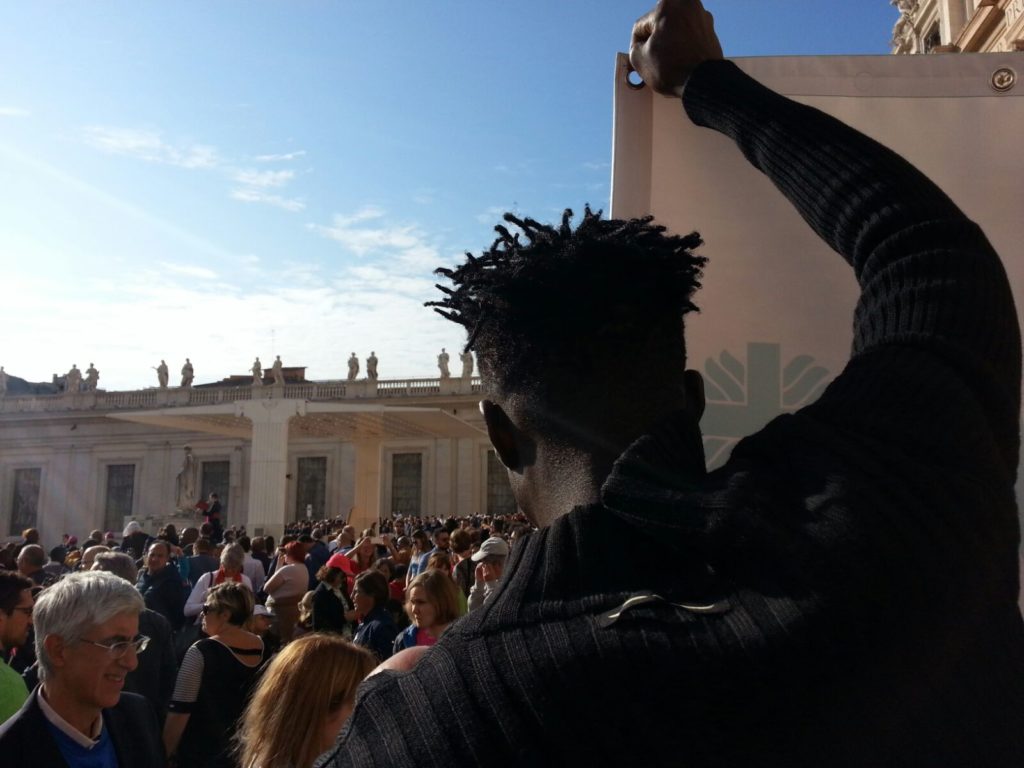 The launch of Caritas’ Share the Journey at the Vatican. Photo by Patrick Nicholson

They had just experienced something they could never have imagined during their hard migration journeys from West Africa to Italy: sitting amongst Pope Francis’ special guests at his Wednesday General Audience at the Vatican.  The three young men – Yancuba, Amadou and Berete – were there to help launch Caritas’ ‘Share the Journey’ campaign. The two-year campaign aims to build relationships between refugees, migrants and local communities and to advocate for safety and protection for people on the move as important new international agreements (known as the UN Global Compacts on Migrants and Refugees) are being negotiated for adoption in September 2018.

“I cried when Pope Francis hugged me,” says Yankuba Darboe, the red T-shirted 21-year-old from Gambia, who endured a terrifying journey by land and sea in 2014. “I just didn’t have the words to respond when he said to me “You are welcome.” It’s the most beautiful day I have ever had.  Can you imagine? Me at the Vatican? Me with the Pope? When he spoke, he again set the example for every other person in the world by asking them to care about migrants and refugees. I remembered that there were many, many times on my journey when I felt no one cared for me.”

Yankuba chatted amiably in excellent Italian with his two new friends in their ‘Share the Journey’ T-shirts, after taking part in a press conference to launch the campaign. He was also excited to discover that Amadou of the yellow T-shirt, aged 20 and from Senegale, shared his surname – Garboe. As Gambia is surrounded by Senegal they pondered if some of their relatives had made a previous migration. “We’re going to keep in touch and try to find out if we are distantly related,” beamed Amadou.

”Either way, we each have a new friend from today!”

Yankuba was returning to Benevento near Naples, accompanied by a team from the local Caritas which had joined in the ‘Share the Journey’ campaign launch.  Caritas Benevento helped pay Yankuba’s school fees and is now supporting him in his biology degree, a stepping-stone he hopes, to his dream of becoming a doctor.

Yankuba makes sure to give back to Caritas, volunteering in projects, including cooking meals for unaccompanied children.  The Caritas team members had watched – glowing with pride – as he confidently gave television interviews. 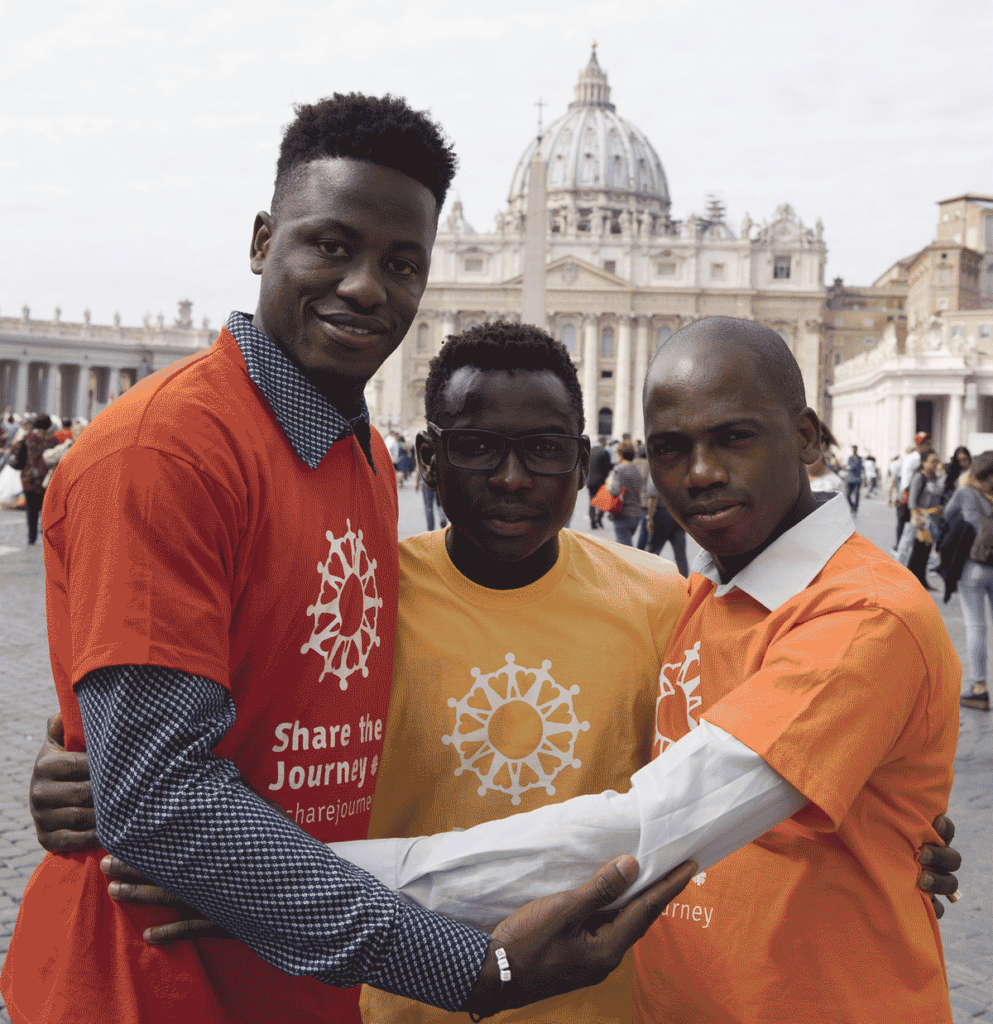 In Pope Francis’ ‘culture of encounter’ (the inspiration for Caritas’ ‘Share the Journey’ campaign), host communities as well as migrants and refugees benefit from the relationships and bonds formed.  The supportive smiles of Caritas supporters brought alive just how real this two-way street is, how sharing the journey really works.

Amadou also gives back to Caritas Palestrina, which has supported him. He works in volunteer programmes, and is involved in inter-faith dialogue. A Muslim, Amadou’s father was an Imam. It was when he died that Amadou set out in search of ways to support the rest of the family.

Amadou tells a sadly familiar story of a horrific journey across the Sahara and the Mediterranean. He knows he was lucky to survive. “But I am even more lucky now.  Who would have thought I would be here with Pope Francis and giving interviews to the press about my experiences and Caritas’ campaign? It was a bit nerve-wracking! But it has also given me new strength to meet other challenges. My next one is starting my next job – making chocolate! I’ve already trained as a pizza chef thanks to Caritas Palestrina’s  ‘’Protected: sheltered in my home’’ project.  I don’t know how to say thank-you enough.’’

Arms crossed thoughtfully across the chest of his orange ‘Share the Journey’ campaign T-shirt, 23-year-old Berete Ibrahima listens carefully, with a shy smile. He left Guinea when he was 16, crossing through Mali, Algeria and Libya before the war there forced him to sail to Lampedusa.

Arriving near Naples, Caritas Aversa helped him access education and then a catering apprenticeship. He now works as a chef’s assistant, but continues to volunteer with Caritas Aversa. Showing their gratitude with concrete involvement is important to Berete and the two other young men.  They also want to build relationships, to make the ‘culture of encounter’ a reality.

Betere tells me how emotional the launch day has been, from sitting alongside Pope Francis in a place of honour, to the respect shown by journalists who listened carefully to him. “It’s made me able to say two words to myself. I belong. It’s hugely emotional to have had this experience, to be involved in this campaign for Caritas Internationalis, to spread the ideas of the ‘culture of encounter’, to ask people to learn from each other, to share the journey. I can ask people to see Yankuba Ahmadou and myself as people who have contributions to make and things to share – if we are given the opportunity.”

28/09/2017 Africa, Blog, Europe, Guinea, Italy, Migration, Refugees, Senegal, Trafficking by Caritas Internationalis
Prev
Next
This website uses cookies to improve your experience. We'll assume you're ok with this, but you can opt-out if you wish.Accept Read More
Privacy & Cookies Policy
Necessary Always Enabled