Caritas gets food to Rohingya refugees

Caritas has swung into action getting food and cooking utensils to Rohingya refugees as of 8 October, after receiving clearance from the Bangladesh authorities. 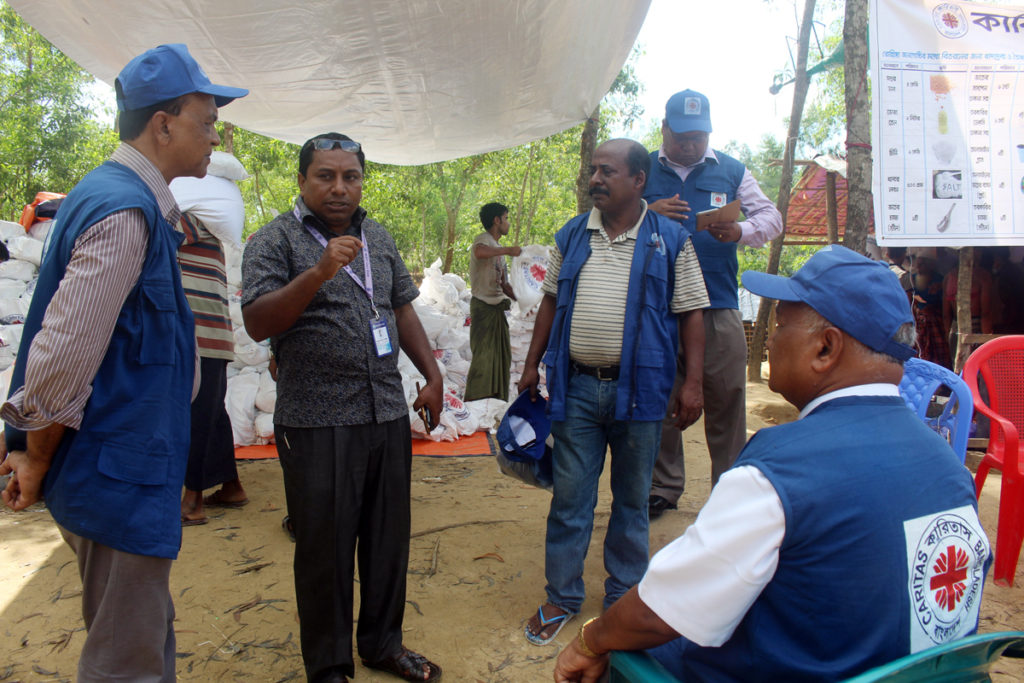 In the first phase of an emergency response to the Rohingya refugee crisis, the Caritas Bangladesh team of 40 staff and numerous volunteers are reaching 1200-1600 families per day with food staples of pulses, oil, salt and sugar, plus household utensils like cups and plates.

Each family receives enough food to last two weeks, along with rice that is being distributed by the World Food Programme.

The team will get aid to 60,000 refugees in the space of four days in this initial delivery of humanitarian aid. “So far it is going smoothly according to plan,” says Mazharul Islam, a Caritas disaster management specialist. “Everyone is working hard to get the food to the refugees as quickly as possible. We have a moral responsibility to stand beside the refugees.” 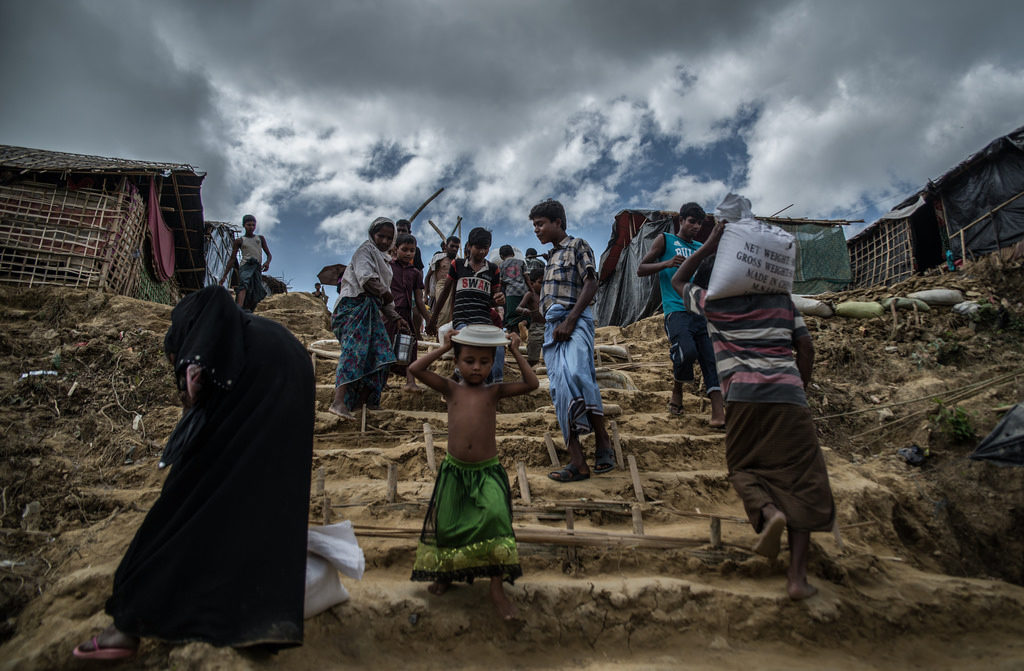 Logistics for getting help to people are extremely difficult in the makeshift refugee camps. The terrain is inaccessible and hilly, with only one road that is now permanently clogged with refugees, traffic and aid vehicles. There is no infrastructure at all for clean water, drainage or power.

Long lines of people crouch in the muddy monsoon conditions waiting to receive aid from Mazharul and his colleagues. “We came empty-handed to Bangladesh,” says Muhammed Sharif Mia, a Rohingya farmer who received Caritas supplies for his family yesterday. They have had nothing to eat except some rice since arriving last month in Bangladesh, and had reached the very edge of survival.

The family was living in Dhiultoli village in Myanmar when their house was burned down by the military on 25th August. With five family members Muhammed walked for 10 days through the forest along with many other Rohingya to reach the border and finally entered Bangladesh by crossing the river Naf. They took shelter in Moinnarghona Camp-2 at Ukhia in Cox’s Bazar, one of two localities where Caritas is now operating.

Muhammed has been unable so far to find his elder son and daughter who went ahead on the journey. When asked if he hopes to return if things get better he replies, “I fear that this situation will never improve and my return home seems uncertain.” 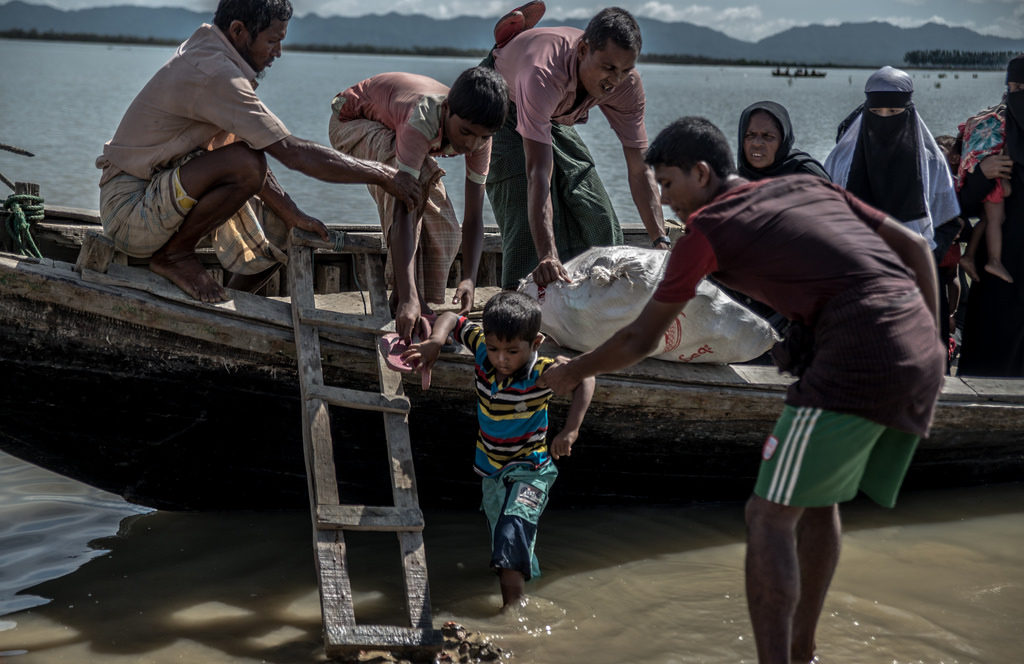 A group of Rohingya refugees help each other ashore, on the Teknaf peninsula, Bangladesh, after crossing the Naf river from Myanmar the previous night. Photo by Aurélie Marrier d’Unienville

The number of Rohingya refugees who have arrived in Bangladesh over the last month after fleeing violence in Myanmar now stands at 519,000 (as of 8 October, IOM). There are no signs of the crisis abating. On Monday alone, 11,000 refugees crossed into Bangladesh.

Cramming into overcrowded boats to cross from Myanmar, the refugees are risking everything. Large groups of people drown when they attempt sea and river crossings in rickety fishing boats, as happened when at least ten children and two adults died as a boat capsized on the Naf river on 28 September.

There are especially vulnerable groups among the refugees. An estimated 24,000 women are pregnant, and face giving birth in the unsanitary conditions of the camps where 50-90 percent of people have no shelter at all, let alone access to healthcare. 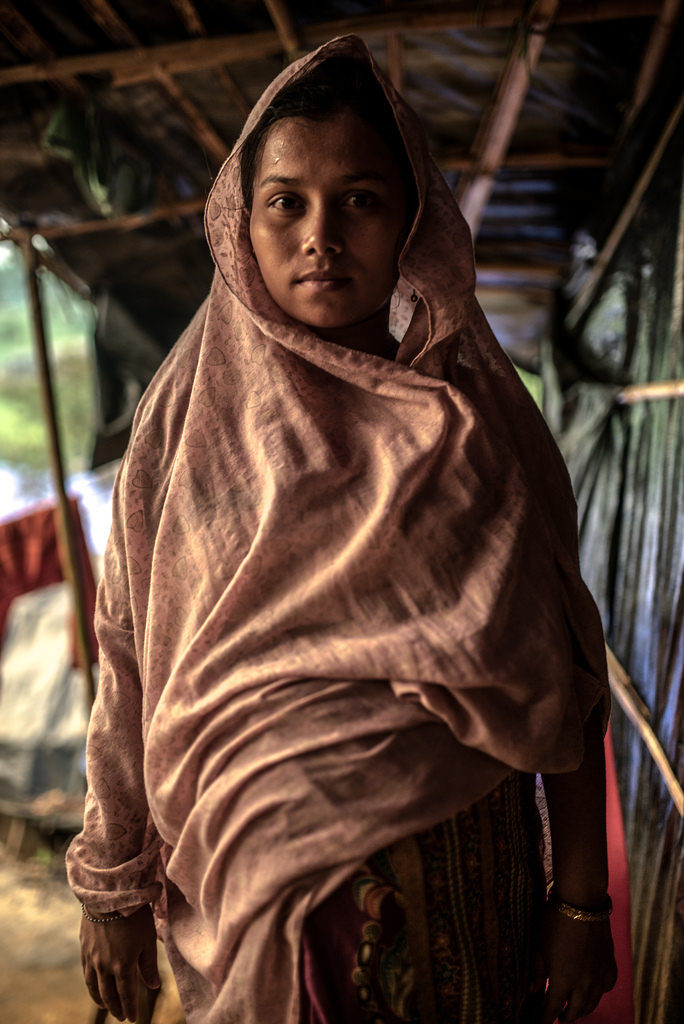 Any expectant mother is apprehensive about giving birth, but for Pormion, aged 20, her forthcoming delivery is terrifying. She is eight months pregnant, and walked for 13 days and nights to escape violent anti-Rohingya mobs in Myanmar. “I’m scared,” she says, “How can my child have a normal birth in the camp? I’m scared because I have no money and after I give birth how will I raise my child? I’m so worried.”

In this rapidly escalating crisis, Caritas Bangladesh has experts in health, education and child protection in the camps assessing the most critical needs so that aid is focused on the most urgent cases. International Caritas member organisations are preparing a joint four-month response with a forecast budget estimated at 2.7 million euros.

Under plans now being drafted, these emergency funds will be used to dig wells to provide safe water, and build bath houses and latrines, alongside sturdy shelters for families. Caritas will also set up two mobile health clinics to help women like Pormion and undernourished children with medical treatment and supplementary feeding.

With the UN estimating that relief will soon be needed for a total of 1.2 million people, including Bangladeshi host populations under severe strain, this is a crisis that requires a long term response right across the global community.