All that is left of Frances Nicolas’ house is now hanging on the edge of a precipice. Beneath it, what used to be a sleepy creek became a raging torrent when Hurricane Maria struck Dominica on the night of 18 September. It was the first Category 5 hurricane to make landfall in the island’s history. The storm affected 56,000 people, with scores dead and injured.

Frances shows the local Caritas Antilles team how her house is still full of storm debris almost two months later, as she purifies spring water using a Caritas ceramic filter – one of 665 the local team has distributed since the storm struck. She has cleared what space she can temporarily, but her entire community will have to be permanently relocated to a safer situation.

Frances’s village of Pichelin lies at the foot of mountains in the south east of the island. It was almost completely wiped out by 160mph winds combined with torrential rainfall that brought a terrifying storm surge of earth, boulders and trees cascading down the hillsides. 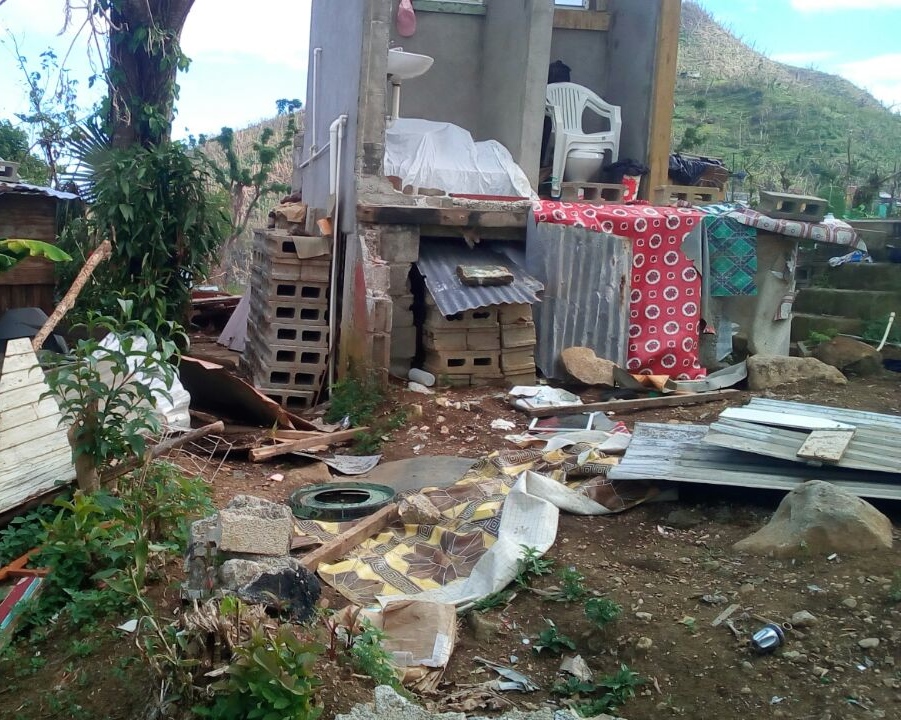 A quarter of homes have been destroyed and 80 percent of the population has been affected.

“Huge trees became projectiles and smashed through the roofs of houses,” says Diane Robinson, Caritas Antilles emergency coordinator, who is working with residents to provide disaster relief. “Rocks and mud came rushing down in torrents and simply swept people and homes away. Concrete structures crumpled like paper.”

With 25 per cent of homes destroyed and 80 per cent of the population affected, Caritas Antilles has been providing a range of emergency items since the hurricane, including nearly 1,600 tarpaulins to replace lost roofs. To date, 754 hygiene kits have also been handed out to households in the hardest hit south-eastern region of Dominica, consisting of soap, cleaning tub, menstrual kit, folding jerry can, laundry soap, female underwear, a sarong, whistle and a solar light. 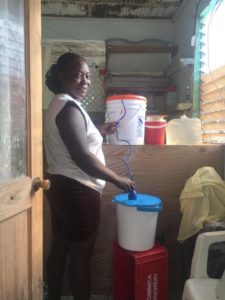 Safe water is of great concern, since Dominica’s entire water system was either destroyed or damaged by the hurricane. Now Frances has to walk ten minutes to collect all the water for her household, in buckets given to her by Caritas. But with countless trees uprooted and topsoil washed down from the hillsides, the springs are full of mud and sediment, with an added risk of e-coli spreading among the local people as they drink, bathe and cook with contaminated water.

Although people are gradually patching their houses and salvaging what they can from the mud, there is unease about what more extreme weather might bring now that conditions are so unstable.

“There is a great sense of fear,” says Diane Robinson of Caritas Antilles. “Every time it rains people scurry home, worried that there will be more floods. Even our staff sometimes dash home from the office, concerned about landslides. Now that so many trees have been uprooted, the hillsides are very unstable, and roads are blocked by huge boulders and fallen trees. Roads are being undermined by slippage and subsidence – you never know how you are going to make it home.”

“The landscape has totally changed.”

The ecology of this Caribbean island has been devastated, as Diane explains: “The whole island used to be dense tropical rainforest, full of waterfalls, it was so beautiful. Dominica was known as ‘the Nature Isle’. Now the landscape has totally changed. The entire island has been ripped apart. Very few trees are still standing and those that are have lost their leaves, even the bark has been stripped off.”

This is not only an environmental tragedy, but an economic one, since so many islanders work either in the tourism industry or Dominica’s banana plantations, both of which have been 100 per cent affected. The same is true in the nearby British Virgin Islands, also devastated by the hurricanes, where the vast majority of the population work in services related to tourism.

Hurricanes Irma and Maria wiped out this group’s immediate sources of income as businesses, hotels, restaurants, and charter boats have been severely damaged or destroyed. Caritas assesses that these economic activities will not begin to recover for upwards of 6 months to a year or longer, and therefore poverty levels will keep on rising well into next year.

Caritas Antilles operating in Dominica and the British Virgin Isles are currently raising 1.9 million euros for emergency assistance in the six months to 31 March 2018.