Pope Francis was the first pontiff to visit in 500 years of Christianity in Myanmar. He brought a message of peace so people may “build harmony and cooperation in serving the common good”.

Conflict between the military and ethnic armed groups in Myanmar has left the country impoverished and the people open to exploitation, especially human trafficking.

“Each year,” said Pope Francis in July, “thousands of men, women and children are innocent victims of sexual and organ trafficking, and it seems that we are so accustomed to seeing it as a normal thing.” Instead he described human trafficking as “ugly, cruel and criminal.”

Read the Caritas Internationalis statement on the International Day for Abolition of Slavery marked on 2 December. 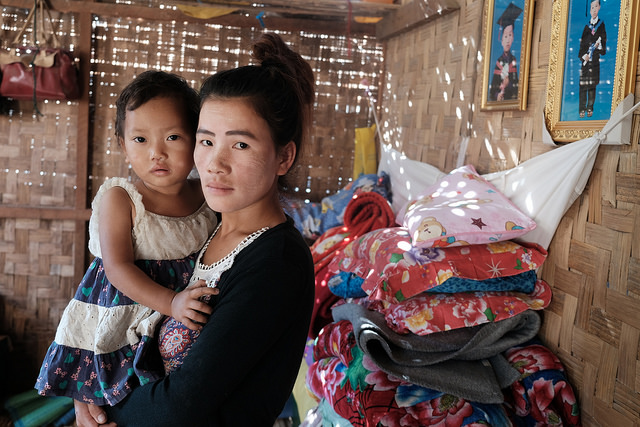 Ja Ittoi was trafficked to China and forced into a marriage. She was earlier driven out of her home by conflict in Kachin State. Photo by Patrick Nicholson/Caritas

“My friends brought me to China. They promised to pay for everything,” said Ja Ittoi. This was 2014. Ja was 21 years old at the time. “They said it would be a holiday.”

Ja was living with her family in a camp in Kachin state in northern Myanmar. Clashes between the government army and Kachin fighters had caused them to flee their village in 2012. “Only when we heard the shooting did we realise the military were attacking,” she said. “They burned down the village.”

Ja’s family made their way to a camp set up on Catholic Church property near Myitkyina. “There was nothing at the start, but we soon received shelter, food and water,” she said. The camp is supported by Caritas, with all the basic needs covered. However, it is difficult to find jobs in the area and camp life can be monotonous.

So Ja made the sightseeing trip to China with her newborn baby organised by her friends.“My friends took me to a man’s house. My friends told me that I had to marry him,” said Ja. “I pleaded with them to let me go, that I had a baby.” While she was confused and in shock, the man and his family seized her and forced her to marry him. 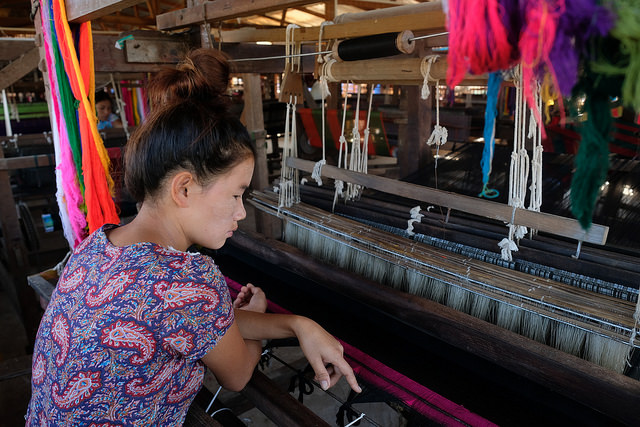 “Life was horrible,” she says. “I had to work in the fields. If I complained, they wouldn’t feed me or would beat me. If I asked for food because I was breastfeeding, they would beat me.” The man used drugs, gambled and would hit her with a stick. “It was constant verbal and physical bullying,” she said.

Although she had no money and the family had confiscated her passport, after 11 months Ja made an escape. Fleeing at midnight with her daughter, she was helped by a friendly couple and a helpful bus driver to get back to Myanmar.

The ordeal wasn’t over. The ‘friends’ who had sold her still lived nearby. They put pressure on her to return, offering money . When that did not work, they tried threatening her. Then her former captor turned up. “I slapped him across the face. I would rather die than go back,” she said. “I’m not afraid anymore.”

Ja is worried for others as vulnerable as she was. “Whenever I think of that time, I feel sick. I warn my friends not to go. Don’t trust anyone, not even their closest friends or family, because you might get sold.”

No to human trafficking

China’s one child policy and gender-selective abortions mean that there are now over 30 million more men than women in the country. Dowry prices for women from Myanmar are low and legal redress is hard to get. 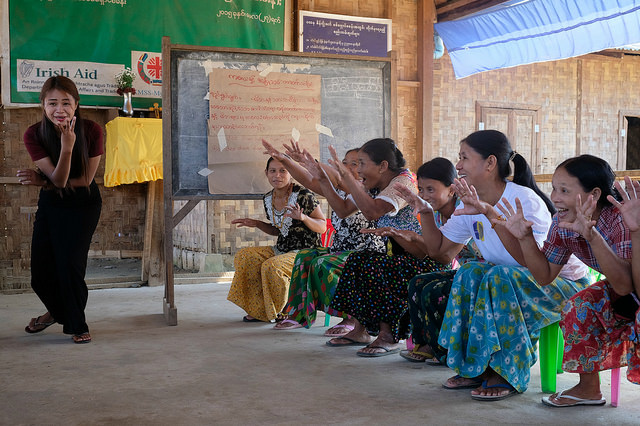 Child protection training for residents of a camp in Kachin, Myanmar supported by Caritas. Photo by Patrick Nicholson/Caritas

“The women forced into marriage are expected to give birth to a boy,” says Sr Jane Nway Nway Ei, who coordinates anti-trafficking programmes for Caritas and the Church in Myanmar. “If they don’t have one after three children, they are sold off again to other men.

“There aren’t any jobs, people are forced from their land by conflict, corruption or natural disasters. Living costs are going up,” Sr Jane continues. “So people are open to job offers and don’t know the risks.”

Caritas workers go into the community to train local people so that they can in turn raise awareness. “We’re not trying to persuade people against migration, but to make sure migration is safe,” explains Sr Jane. Caritas reached 10,500 people in 2017, with four trips a year to each community they visit.

Sold out in Thailand

“I was orphaned young and raised by relatives,” says Moe, from Yangon. “I had to work in construction or the market just to pay for my schooling. At 16, they arranged for me to marry an older rich man.”

It was an abusive marriage. “He would torture me,” she recalls. They divorced when she was 21 years old. Her family refused to take her back. By this time, she had two small children.“Nobody would give me a job because of the children. I was forced to beg on the streets,” she says.

A woman from an employment agency approached her. “She was kind. She promised me work in a hotel and to arrange childcare.” The woman took her to the south of the country. When they arrived, it wasn’t a hotel but a brothel.

“I was shocked when they asked me to entertain men. I begged them to let me do something else.” The young mother was trapped. “My room was on the third floor. If I had jumped out of the window, I might have died,” she says. “I tried to escape so many times.” 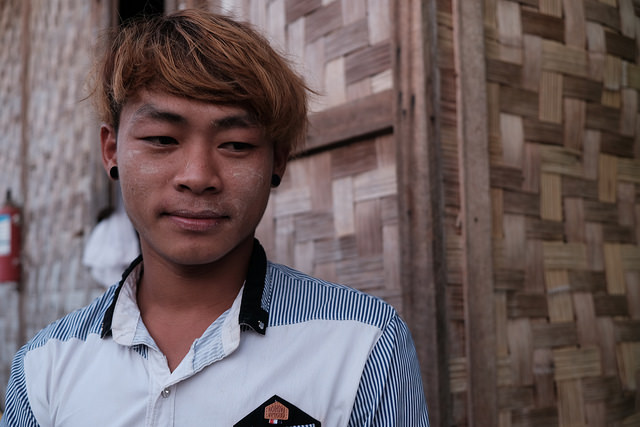 John Mung, 20, went to work in a noodle bar in China. Instead he was held in one room for a month. His family managed to get him released after he managed to get a message to them. Photo by Patrick Nicholson/Caritas

She had to entertain five to 15 men a night, with no time off. She was never paid. No money was sent home. Instead, the recruitment agency had given the children back to their father, saying that Moe was enjoying her work as a prostitute.

“I told myself that I would survive, even when I felt weak with tiredness,” she said. Later, he was sold to a brothel in Thailand for USD 800, where she worked for four months. But she made friends with a police man who organised her release.

Moe worked for him as a maid, but when he too stopped paying her salary, she went to work in construction. Instead of paying her at the end of the month, the building site owner called the police to report she was an illegal. She was imprisoned in a Thai jail, with “three cups of water to wash with a day, punishment of 100 jumps, and if you sat up at night, a beating.” Released after a year, she finally made it back to Myanmar.

There she remarried. The couple were very poor. “I dreamt of a sewing machine and my own shop,” said Moe. “I met an old childhood friend on the street. It was amazing to see her. She said she could find me work up country,” she said. 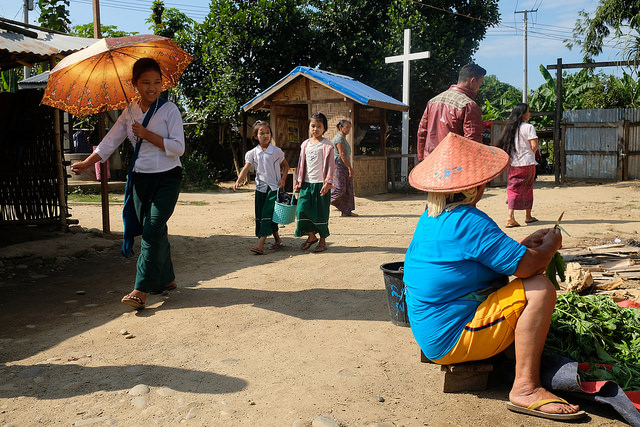 An IDP camp in Kachin. Conflict in Myanmar has left a quater of a million people displaced from their homes. Men, women and children are vulnerable to human trafficking. Photo by Patrick Nicholson/Caritas

Against her husband’s objections, she set off with her friend. “I was drugged on leaving Yangon,” said Moe. “When I regained consciousness I was in China. Agents were taking me around, street to street, trying to sell me.”

She ran away with another girl, was arrested by police, beaten and returned to the agents. “I knew then there was no escape.” After a few days, she was bought for USD 650. “When the man brought me home, I broke down. I cried every day. I was so desperate,” she says. “He took me to the cinema to cheer me up. I went to the toilet and escaped.”

Moe went to the police. Her husband, suspecting that she had been trafficked, had contacted them and anti-trafficking organisations already, so they were able to track her story. She was taken to Myanmar and released. She now lives in Yangon, poor but surviving.

“Young girls need an education and life skills. They need to learn about trafficking and the dangers of migration to avoid having a life like mine.”

Caritas Myanmar is a member of COATNET