There has been considerable improvement in the care and treatment of children living with HIV. However, Caritas is concerned that progress is slowing down. 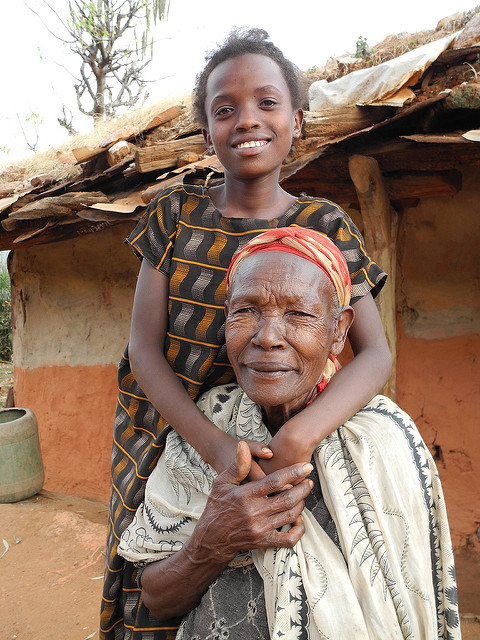 When her son and his wife both died of AIDS, Bayee Chumee took on the care of their daughter who was just two years old. Some years later, after repeated illness, the young girl was diagnosed HIV positive, and she has been on treatment since. Photo by Tamiru Legesse/Trocaire

There are 2.1 million children living with HIV. 43 percent of them are receiving anti-retroviral therapy. This compares to 54 percent among adults. While there has been considerable progress in the global scale-up of antiretroviral therapy, the year-on-year increase is slowing down among children. In 2010-2011 there was a net increase of 100,000 children on ART; between 2015 and 2016 that increase was only 58,000.

Going the last mile will require innovation in diagnosing women living with HIV, ensuring they understand the value of adherence to treatment and increasing child ART coverage.

This will involve increased efforts to develop new medications for children. In contrast to the development of better ARVs for adults living with HIV over 20 years, there have been very few new medicines made available for children. Existing paediatric ARVs are often bitter tasting, difficult to administer, inappropriate for low-resource settings, and with toxic side effects for growing bodies.

The lack of suitable ARVs for children has contributed to low levels of treatment initiation, retention in care, and viral load suppression. Improved paediatric formulations could save countless lives. More focused, accelerated, and coordinated action is therefore of the highest urgency.

Leaders from national and international organisations met in the Vatican on 17 November to discuss accelerating the development of priority paediatric formulations of ARVs. The meeting brought together major pharmaceutical and diagnostics companies, donors, governments and organisations that provide or support services for children living with HIV.

The meeting was led by Cardinal Peter Turkson, prefect of the Dicastery for the Promotion of Integral Human Development. ”Good will and the prophetic moral leadership of Pope Francis and other religious leaders will strengthen our resolve to make real and accountable progress in our efforts to eliminate paediatric HIV by making available early diagnosis and treatment to all children and adolescents who are living with HIV,” he said.

Participants discussed an action plan to expedite the research, development, approval, introduction and uptake of optimal drugs and formulations for infants, children and adolescents. Proposals included both steps to make priority drugs in the pipeline quickly available in the short term as well as innovative mechanisms that could be put in place to accelerate the development of paediatric formulations of drugs for HIV.

Caritas Internationalis is ready to support the early adoption of priority formulations and diagnostics and take steps to facilitate their wider roll-out, including by developing introductory guidance, materials, and other tools for health facilities. Caritas will work with communities to help build treatment literacy, generate demand, and expand access to ARVs among children. Caritas will mobilise Catholic Church networks of hospitals and community structures to distribute paediatric medicines in hard-to-reach places and in situations of conflict and crisis. Caritas will increase efforts to share information on the roll-out of new paediatric formulations.