Working towards a better Venezuela 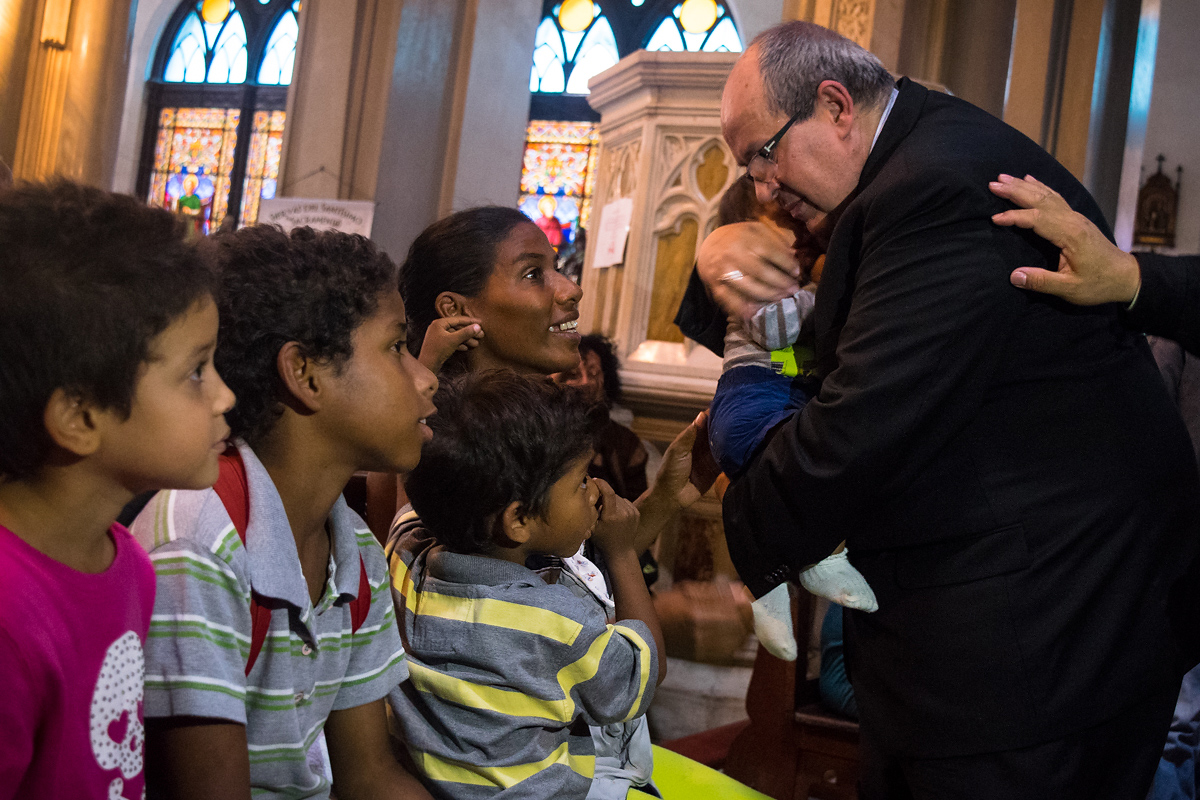 Auxiliar Bishop for Caracas, Father Tulio Ramirez provides comfort at the Basilica of Santa Capilla in Caracas. The economic crisis has affected all sectors of Venezuelan society. Photo: David Contreras for Caritas Venezuela

In the lead up to the Easter season, the Colombian Church donated 250,000 communion wafers to the Catholic Church in Venezuela. Scarcity of staple foods is touching every aspect of life pushing up prices and causing families to scramble to nourish themselves. A shortage of wheat flour has severely hampered the Church’s production of Hosts, sacramental bread used in the ritual of the Eucharist. Production has dropped to less than half of the previous monthly levels of 70,000. Priests are resorting to dividing Host into pieces to provide Holy Communion to congregants.

Rampant food scarcity means that 40 percent of the Venezuelan population is subsisting off of cassava and other tubers. Inflation has reached a staggering 2,700 percent. Shortages on everything from food staples to lifesaving medication are now the norm.

“Life in Venezuela has collapsed,” says Caritas Venezuela Director Janeth Márquez. “No one is left unscathed. Our catechists are undernourished. Our priests don’t have anything to eat. The Church and Caritas staff members are facing the same challenges as the rest of Venezuela. Caritas workers have children who are undernourished. Our homes are also barren of food. Ours is a dual intervention; we need to care for the caregivers while providing care for others.”

With more than 87 percent of the population living below the poverty line, people measure hunger in tightening belt notches. The average Venezuelan lost more than 11 kilos in 2017. The need for food is pushing people to extreme measures. “It’s like something out of Dante,” says Marquez. “The theft of food is on the rise. People are kidnapping and demanding food as ransom. Others are breaking into homes to steal food. Insecurity is high. People are dying of hunger; diseases are resurging, our country is deteriorating, and having a ripple effect on neighboring countries. If we improve food security, all the other indicators will improve as well.” 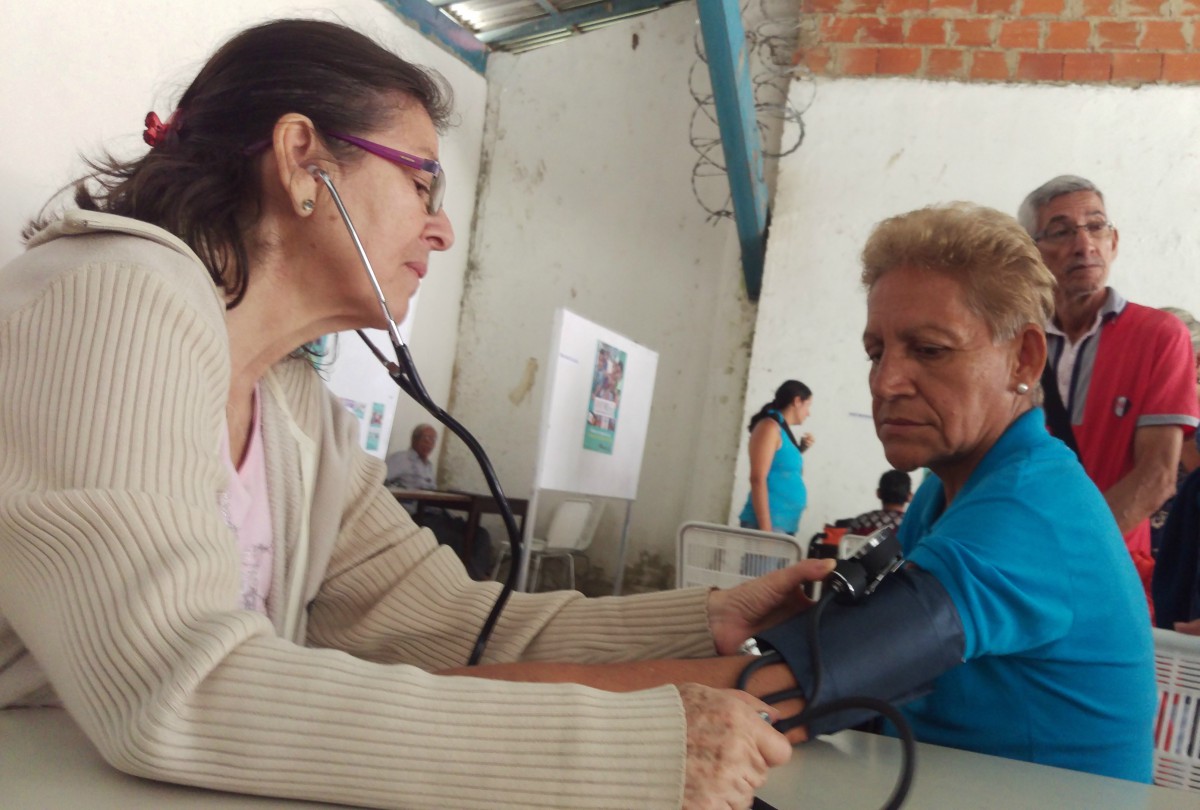 Choosing between health and food

Unemployment is at an all-time high, and resourceful Venezuelans have to look to creative means to cobble together a meagre income. Julio Aular, sold a parcel of land to purchase a car to bring in a little extra as a taxi driver. Then Julio’s three-year-old grandson, Fabricio, fell ill due to complications from malnutrition. Lack of proteins made his skin swell and become infected.

“The problem is there is no medicine,” says Aular who sold his car to buy the medications needed to treat Fabricio. “There is no work, and if there is work one’s salary doesn’t cover the cost of medication. If you do buy medicine than there is no money for food.” The money from the car sale ran out. Fabricio has been in the hospital for going on 13 days and is still not cured. Aular and his family are agonizing over how they will help young Fabricio complete his treatment.

An 85 percent shortage of medicines has created a public health crisis of astronomical proportions. Diseases such as measles declared eradicated in Latin America in 2016, have made a radical comeback. Since 2017, there have been 886 cases reported in Venezuela, with others popping up in neighbouring countries as a consequence of the diaspora. Diptheria, tuberculosis, malaria, and syphilis are also on the rise. People already weakened from hunger are even more susceptible to the outbreak of disease.

Caritas Venezuela is working to fill the gaps by stockpiling needed medicines and routinely hosting health days where an estimated 400 medical volunteers provide health monitoring. Recently Caritas was able to work to get life-saving malaria medication into the country to try and contain the outbreak. 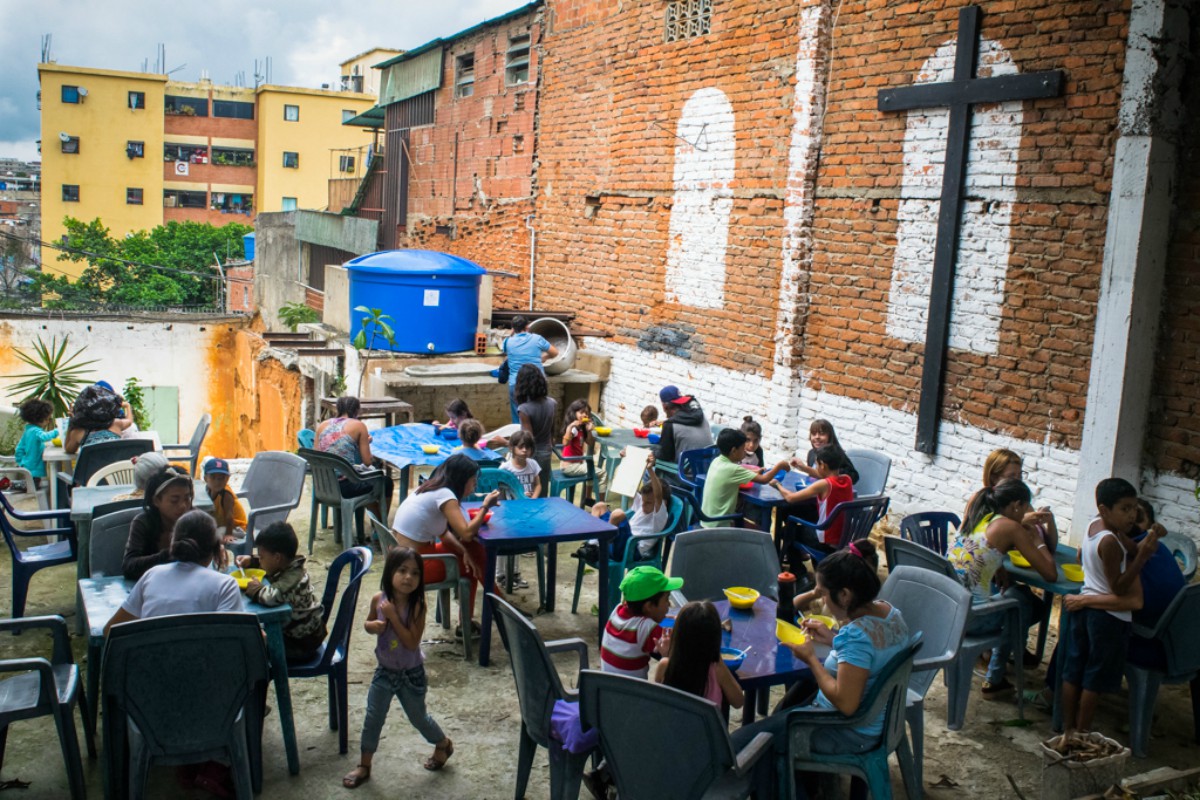 Inspired by a legion of volunteers

With each passing day, the Venezuelan diaspora grows. An estimated 4 million have left the country. “We feel like we’re being left alone because so many people are leaving,” says Márquez who worries about the long-term impact of the Venezuelan brain drain. “The professionals, the doctors, the teachers are all migrating. We’re mortgaging the future. The youngest amongst us, at a critical time of brain, emotional, and physical development, are starving. This hunger is going to have repercussions for decades to come at the home level, the family level, and society at large.”

Still, despite the challenges, Márquez is heartened by the unwavering faith of Venezuelans and the palpable desire to rebuild their nation. The Church has set up nutrition centres, largely staffed by volunteers, where children under 5 and expectant mothers are monitored and treated for malnutrition. The number of people tithing their time has doubled in the past year from 10,000 volunteers to over 20,000. More and more parishes are opening up ollas comunitarias (soup kitchens), which have served more than 1.25 million meals.

“Social programmes like our ollas comunitarias not only provide needed food to family, they create dialogue spaces, and are an opportunity to strengthen ties and community life by giving people a place to work together,” says Márquez. “We’re seeing very poor people helping other very poor people. That’s part of the role of the Church, through listening and prayer, we awaken their faith and give them hope. This allows people, despite their circumstances, to keep helping, living, and working together for a better Venezuela.”