Faith based organisations unite for dignity of migrants and refugees

WHERE: Palais de Nations, Geneva, Room XXV in conjunction with the meeting of the Human Rights Council.

WHY: The United Nations set out ambitious plans to create more effective and humane collaboration on migration and refugees with the New York Declaration adopted by its Members States in September 2016. It was the starting point for talks on two compacts, the Compact on Safe, Orderly and Regular Migration and the Compact on Refugees, to be adopted in 2018. The Declaration gave the Geneva-based UNHCR, the UN Refugee Agency, the task to develop the Compact on Refugees with governments and other stakeholders. 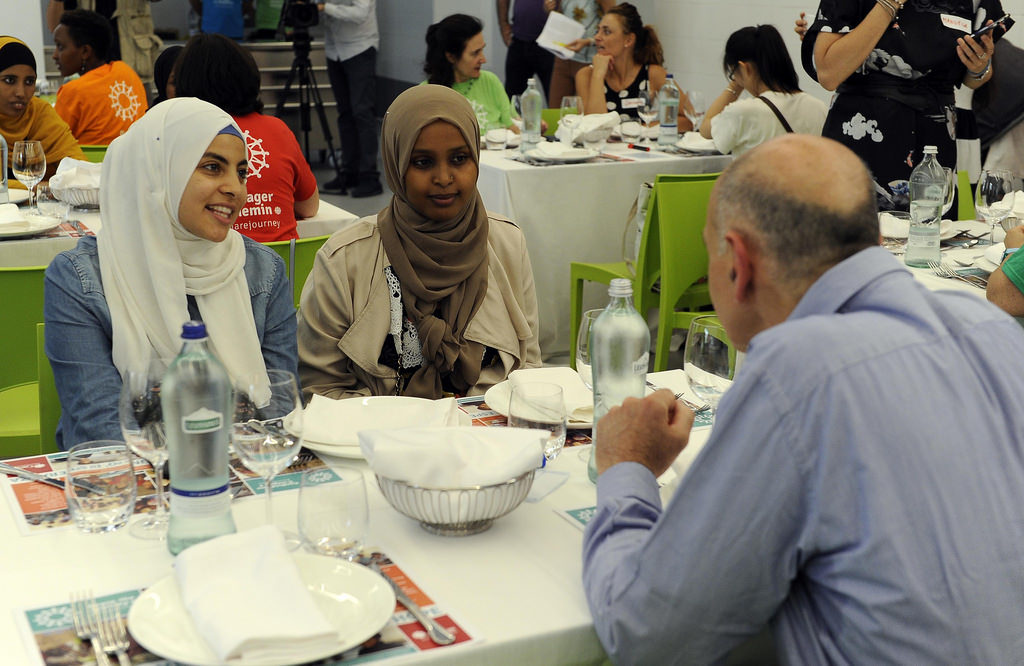 Rome, Italy, 19th June: Caritas staff and insitutional and Church figures shared a meal with migrants and refugees as part of the Share the Journey campaign global week of action (17-24 June 2018). It was a moment in which migrants could share their stories and people could get to know each other. Photo by Caritas/Stefano Montesi.

Categorising migrants and refugees as regular, irregular or refugees does not put their human dignity and human rights first, especially when it deprives them from access to education, justice, social services, health care and housing. Caritas asks for access to essential services regardless of migratory status in both Compacts.

The impact of climate change on vulnerable societies is likely to drive further migration in the years ahead. The compacts must acknowledge the risks related to climate change and provide specific protection for those who are displaced by its impacts. Failure to do so leaves a significant number of people without protection.

The principle of non-refoulement says that no one should be sent back to his country if they fear for their life there. Caritas is calling for non-refoulement to be in both compacts.

Cardinal Tagle of Caritas Internationalis said, “If the ´dream´ of a peaceful world is shared by all, if the refugees´ and migrants´ contribution is properly evaluated, then humanity can become more and more of a universal family and our earth a true ´common home´. Integral human development goes beyond economic well-being. It includes growth in mutual respect, dialogue, friendship” and solidarity.”

Jack Palmer-White, the Anglican Communion’s Permanent Representative to the United Nations said, “Churches and other faith communities are on the front line of many displacement situations – whether in identifying early warning signs of potential displacement, meeting the physical and spiritual needs of displaced populations, or dealing with their own displacement, within countries and across borders. As stakeholders come to agree and implement the two global compacts later this year, it is vital that the expertise and experience of faith communities is recognised as part of the solution.”

193 States have committed to working towards ending child immigration detention in the New York Declaration, however the Global Compact Negotiations child detention has continued to be an issue that has faced push back from several states. Youth Ambassador for the Global Campaign to End Child Immigration Detention, Mr. Hayat Akbari, fled his homeland at age 17 and spent more than a year at an Indonesian detention centre. “It was one of hardest times in my life,” he says “there were 42 of us living in one room, where we were all different ages”. In this event he advocates for States to implement the human rights standard which acknowledges that detention violates child rights.

Available for interview: Hayat Akbari
Four years ago, Hayat Akbari feared for his life living in Afghanistan. At age 17, he fled his homeland and spent more than a year at an Indonesian detention centre before he arrived in Australia as a refugee two years ago. He is now completing an arts / law degree and is Youth Advocate for the Global Campaign to End Child Immigration Detention. He is also a member of the Asia Pacific Refugee Rights Network (APRRN) and the Multicultural Youth Advocacy Network (MYAN). Where do you currently live? (city/town or country) I live in Auburn, Sydney. Why does the campaign matter to you? Detention is not the only solution to apply towards children, freedom is the right of every human being. There are solutions and alternative to detention. How have you been involved in the Global Campaign to End Child Detention? As part of the Campaign’s celebration of World Children’s Day in 2017, Hayat shared his story to commemorate the the international human rights of children. Are you involved in other advocacy, campaigning or community activities? Yes, I advocate for vulnerable people living in the community, specifically, the 30,000 people living with an uncertain future. I will be advocating this year in the UN consultation where I will make represent the voices of these these people and make sure their concerns are heard. What are your hobbies, or how do you like to spend your free time? I read books, mostly history and novels. I like to take nature photography in my spare time. I also hang out with friends and play soccer if I have the time, otherwise I mainly go jogging as my daily routine. Do you currently work or study? If so, what’s your job or what do you study, or what did you study? What do you want to see the campaign accomplish? What is the solution to end child detention? I want all countries to ban putting children in detention. I believe there are other solutions to detention. Putting children in detention can harm them, mentally and physically, which is disaster. I believe children themselves are the solution and that community detention is one of the core solution to this issue. This solution can provide children with the chance of education and staying positive.