How Caritas helps in Syria 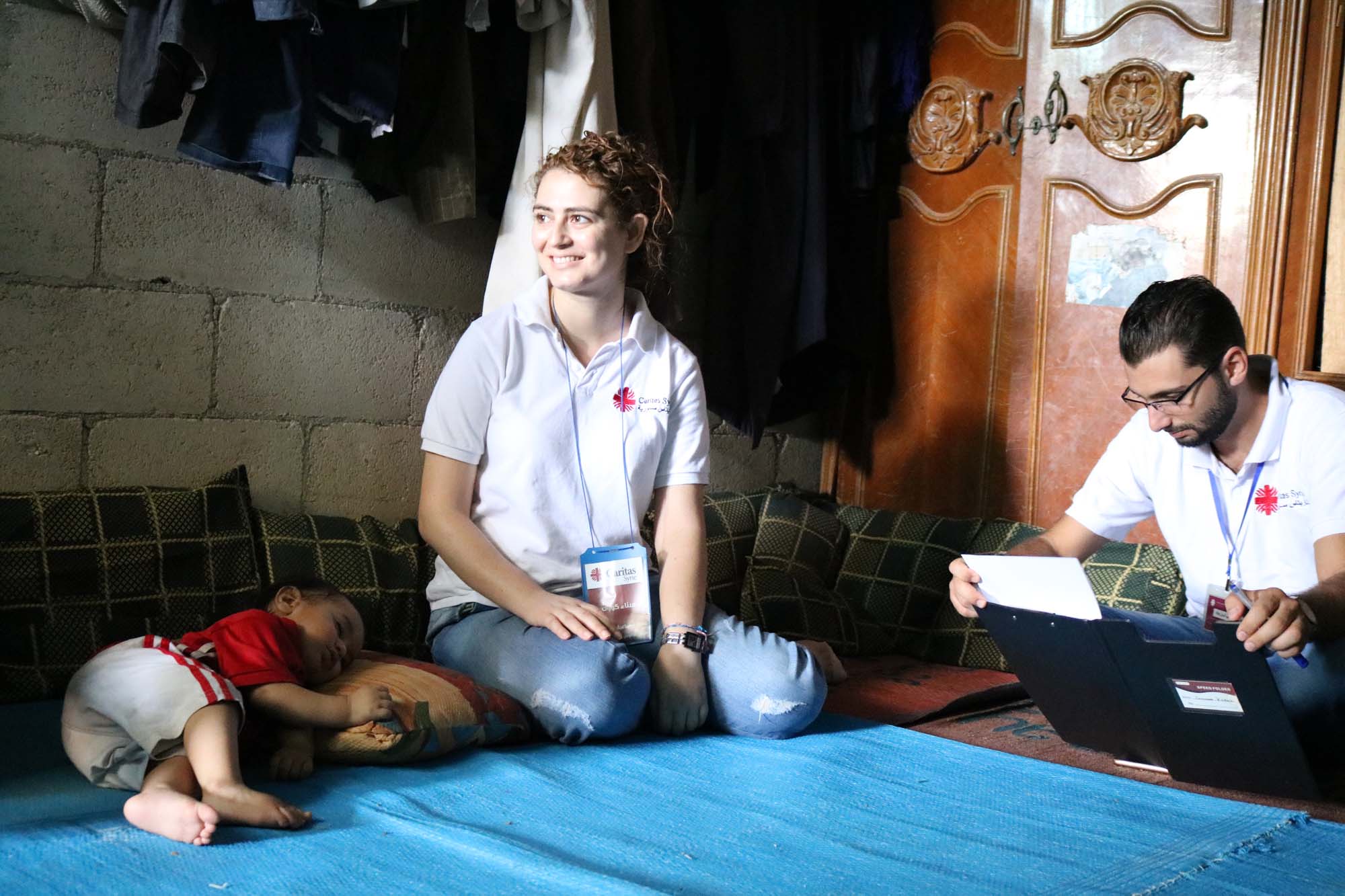 She and her family had been seeking refuge at a farm when the militants arrived. She told her children to run away without her. The family had just come on foot from another shelter. She was too tired to move.

“I promised to follow when I had the chance,” said Fowziah. Her children fled and Fowziah took cover in the field. Despite bullets pinging around her, she survived by lying low and eating fallen olives.

“I passed the time praying for my kids to be safe and that I would find them,” she said. After the fighting stopped, Fowziah hailed a passing motorcyclist who gave her a lift to a local shelter, where she was reunited with her family.

“We had lost hope that she was still alive,” said Hiba, her daughter.  “When we saw her entering the room, we started laughing and crying at the same time. We hugged her tight.”

The family, which has been forced to move 18 times by violence during Syria’s civil war, was among the country’s 6.1 million internally displaced people.

The war, now in its eighth year, is one of the world’s worst ever humanitarian catastrophes. Most international experts believe over 500,000 people have died in the violence.

The United Nations estimates that 13.1 million are dependent on aid inside the country, with 5.6 million in acute need.

Fowziah and her family have now returned to their home in Aleppo city, where they lived before the war and which is again peaceful.

“Caritas workers started to visit me regularly in my house,” she added. “They offered us all kinds of help to be able to settle down again.” 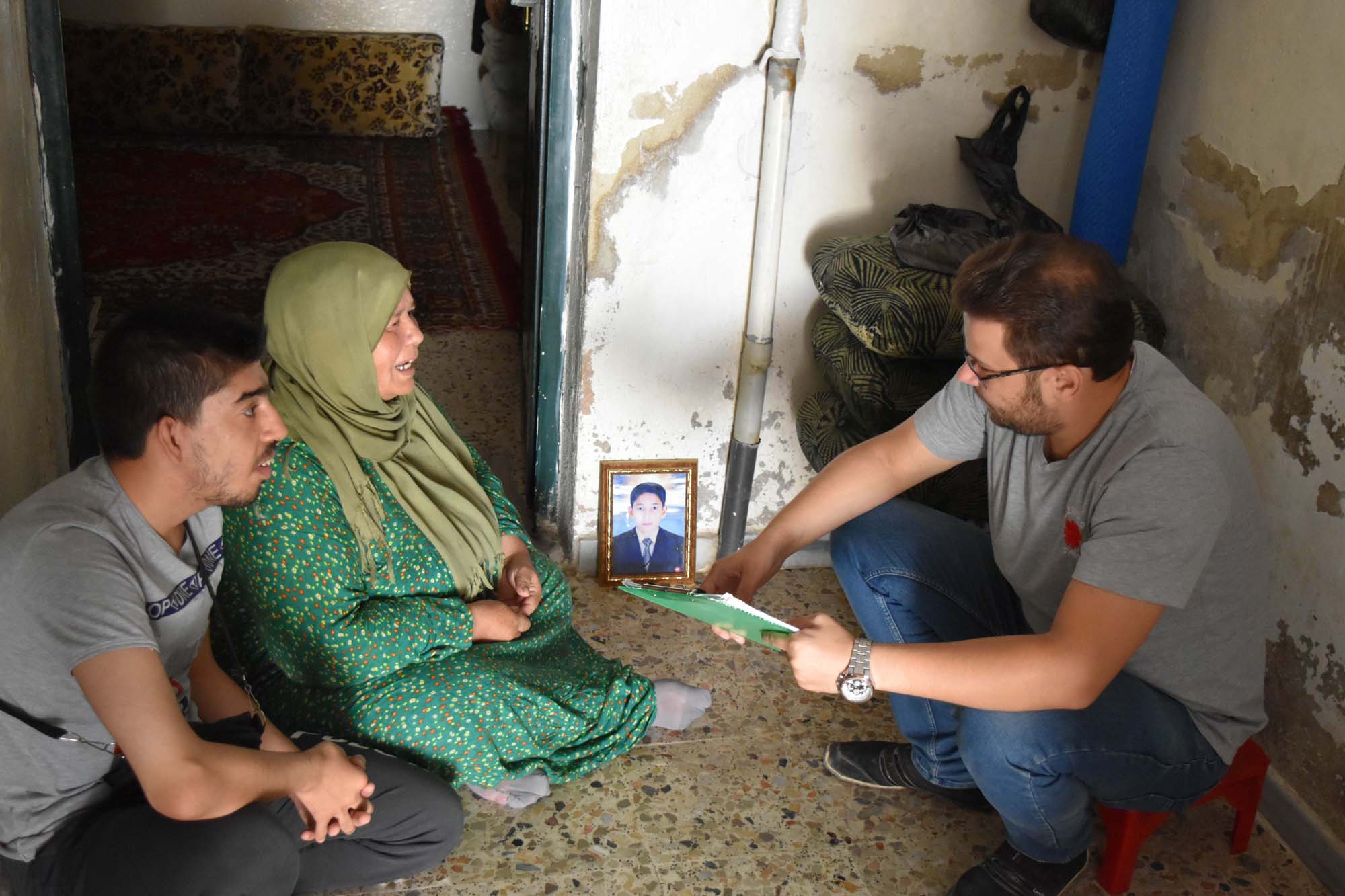 Please donate to Caritas so that we can continue to help people like Fowziah.

Caritas helps Syrians from all religions

Caritas is providing assistance to Syrians regardless of their ethnic or religious affiliation, with clothes, blankets and food parcels. It also helps with medical treatment, shelter, rent, fuel, education and counselling to cope with depression and bereavement. 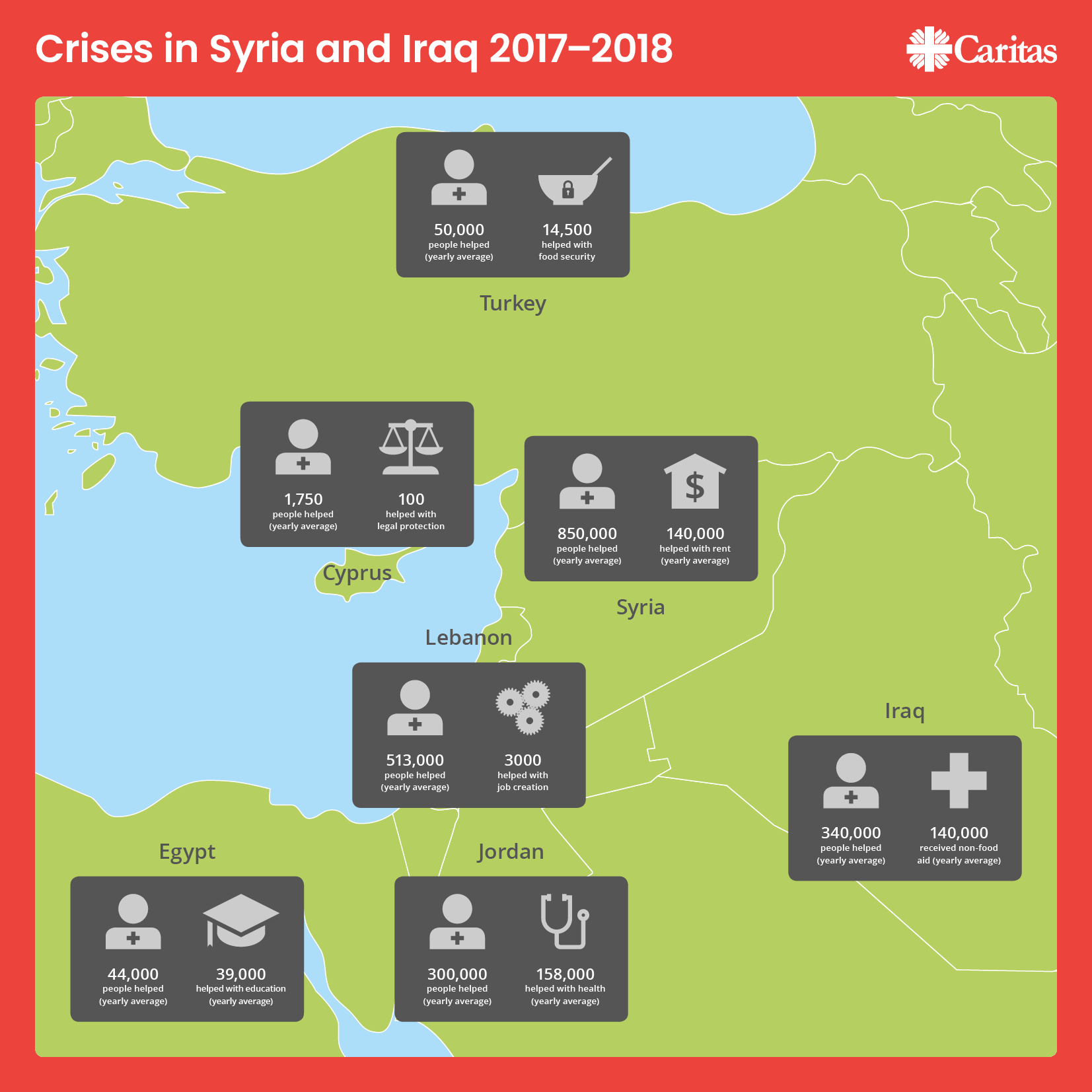 See how Caritas has been helping in Syria, Iraq and neighbouring countries.

Lana is one of Caritas’ beneficiaries. She was four years old and sleeping in her family’s apartment in the Sheikh Abou Bakr area of Aleppo when a shell fell nearby with a terrifyingly loud blast. Her mother, Saideh, rushed into the bedroom to check on her and her younger sister, Diana.

“Diana was crying, but Lana was sitting in her bed with her eyes wide open, speechless,” said Saideh. “I tried to shake her by her shoulders while I was crying and calling her name, but Lana was very distant, as if her soul was separated from her body.”

Lana had lost the ability to speak. There was no means for her parents to help her. Sheikh Abou Bakr’s infrastructure had been destroyed, with roads strewn with rubble and sewage.

Saideh’s husband is a construction labourer who often works far from home, sometimes setting off early in the morning and returning the next day, leaving her to look after their two daughters and infant son.

“Lana used to talk in a normal way like other kids do,” said Saideh. “She used to say ‘Mom’ and ‘Dad’ and a lot of other sentences.  But after the bombardment, everything changed.”

Psycho-social support for children affected by the war in Syria

Two years passed, but Lana made no progress with her speech. Then, Caritas opened a psycho-social support centre in the area. When its team reached out to her, Saideh immediately welcomed the idea of Lana attending the centre, hoping it might help her speak again.

At first, the team had problems with Lana because she was couldn’t sit still, but, slowly, she became calmer, finding it easier to socialise with other children. Playing one game in particular seems to have helped her speech improve: each child had to express a word with gestures and movements and the other children guess it. The team then asked each child to spell out the word slowly.

“When it was Lana’s turn to play the game, after many tries, to our big surprise, she succeeded in saying the word ‘egg’!” said Pierre, a member of the psycho-social team. “This was the beginning of Lana starting to talk again.” 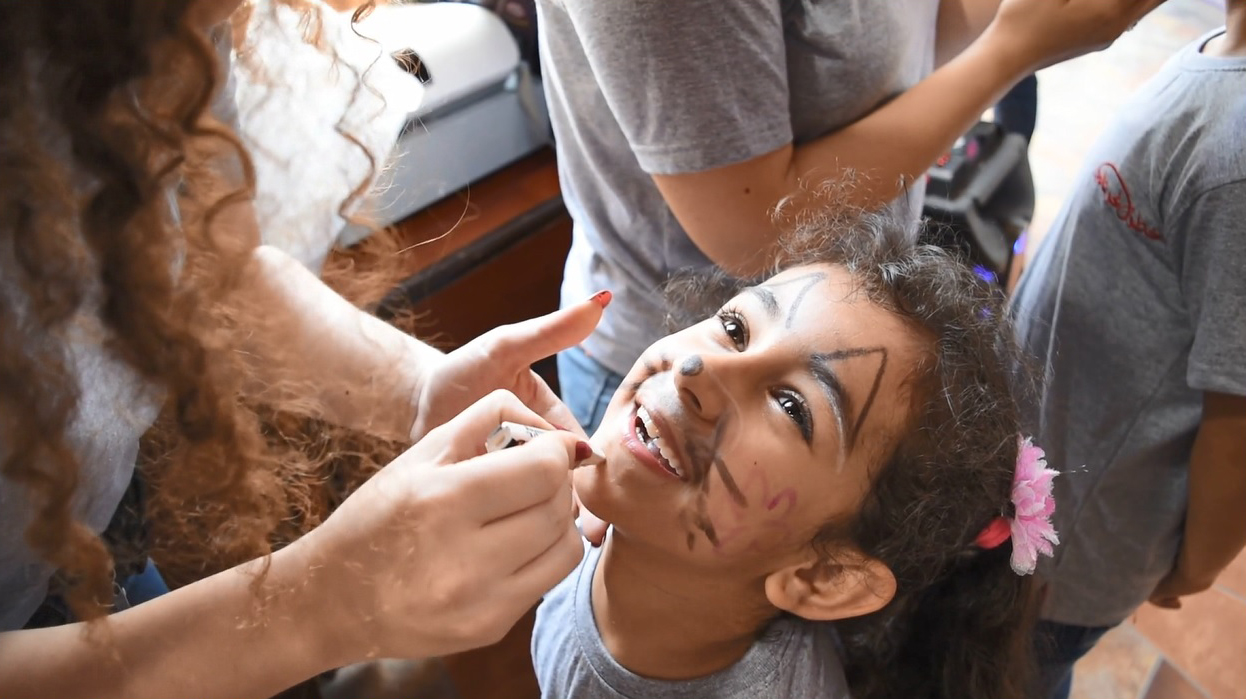 “I want to thank Caritas for everything they’ve done for my daughter,” said Saideh. “They are standing with her to help her speak again.”

“They also registered her to have pronunciation lessons that I would never be able to pay for,” she added. “My husband and I can barely provide food for our children.”

Caritas is helping families like those of Fowziah and Saideh throughout Syria.

Medical help for people who can’t afford it

Khalifeh, a farmer who was forced by the war to leave his hometown of Hassakeh, moved with his family to Tartous. Life was difficult, but they found an unfinished building that they made their new home. Its owner permitted them to live there to protect it from thieves. To look after his wife and three young children, Khalifeh was able to earn a day’s wage by working in a market whenever he was needed.

But, one day, after he heard that their old family house in Hassakeh had been destroyed, Khalifeh had a heart attack. He was taken to the hospital where he underwent emergency surgery; but his family couldn’t pay the bill.

His brother contacted Caritas, which, with other aid agencies, paid for the surgery. They also helped pay for fuel during the months of Khalifeh’s recuperation. 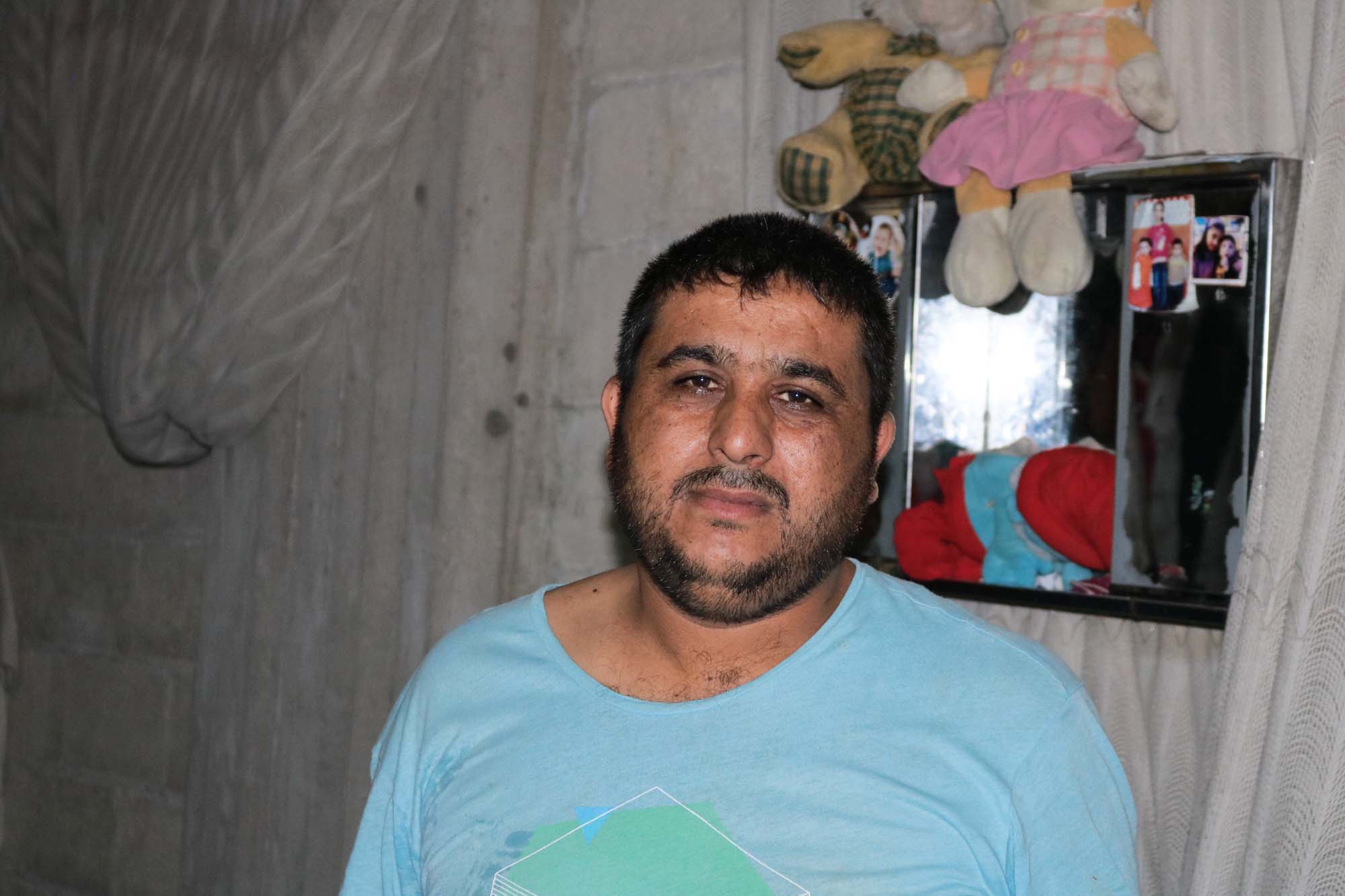 Caritas Syria helped Khalifeh after he had a heart attack.

He can’t work as hard as did before his heart attack, but he now earns a little money cleaning stairs and apartments for neighbours.

“I work as much as I can,” said Khalifeh. “Sometimes I don’t buy my medicines because I have to buy food for my hungry children, but at least I feel that someone is now standing with me whenever life becomes very difficult. It is Caritas.”

Mohamed, who lives with his family in Hassakeh, is also grateful for Caritas help. All four of his children suffer from haemolysis, a blood disorder requiring regular medical treatment.

Mohamed works all hours and any job – painting walls, carrying loads, driving — to try to look after his children, who are aged from two to eight years old.

But, he says, it was impossible to cover the bills for blood transfusions, doctor consultations and medicine.  “Sometimes my wife and I had to choose which child was in the worst condition and take only that child to the doctor as I couldn’t afford to pay for all of them at once,” he said.

However, a member of his family told him about Caritas and now things have improved.“Caritas is covering almost 80 percent of my children’s medical expenses,” said his wife, Fatima.  “We used to borrow money to get the treatment, but now we don’t have to worry about that.” 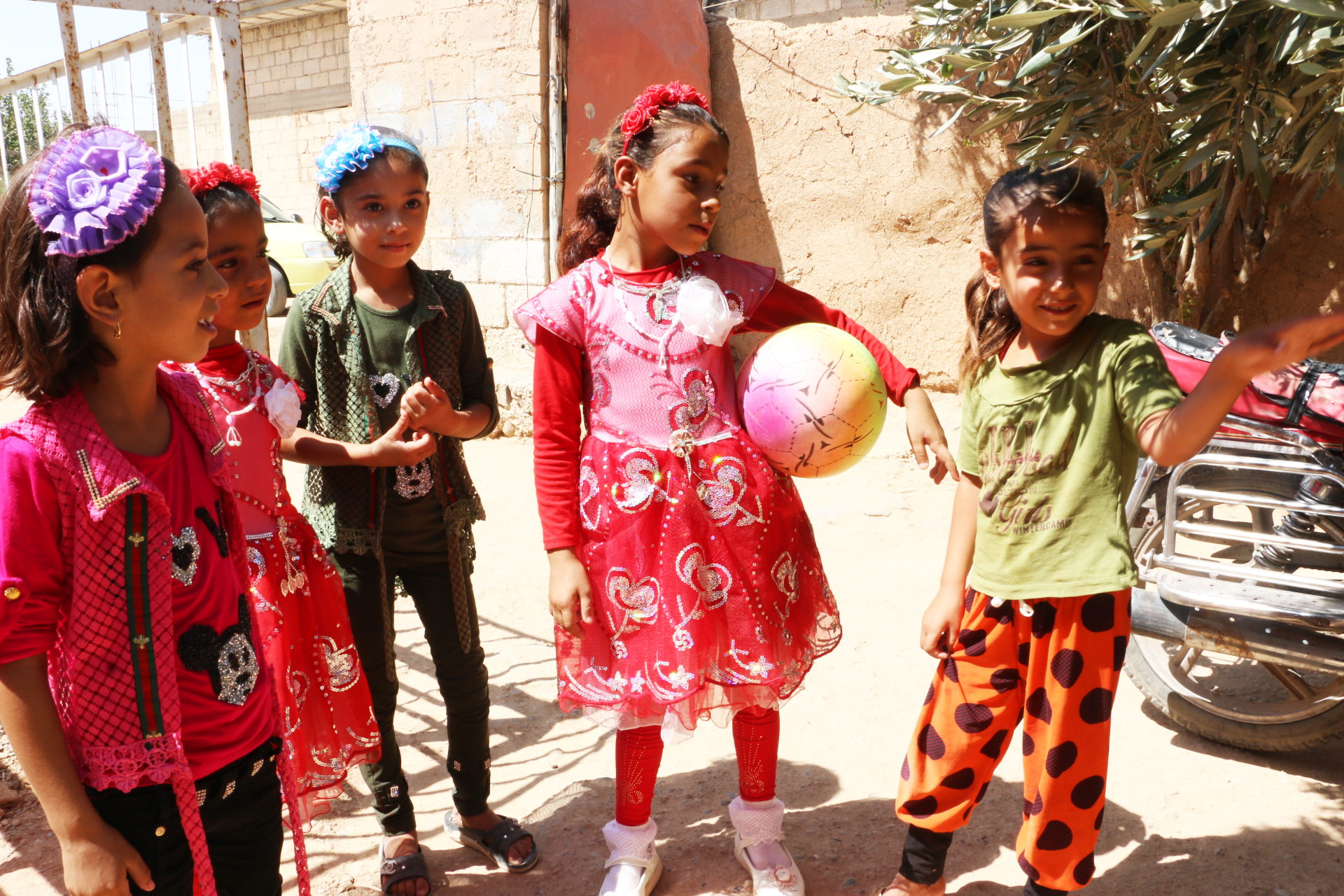 Claudia, a Caritas worker in Hassakeh, said the team continues to visit the family to check on the children.  She said, “We feel happy to see the children in good health and playing again with their friends in the street.”

Over the last year Caritas has helped 850,000 people in Syria, spending $87 million on aid.