Watch this film showing how Caritas Venezuela is helping to tackle malnutrition and read more of Yusmarely’s story below.

Mangoes for breakfast: relief for a worried mother

Thump, another mango lands in Yusmarely Acuña’s front yard with a large thud followed by a stampede of bare feet. Her three children Greivis, Grendimar, and Valentina, and their cousins kick up dust in search of the treasured fruit.

Valentina, 7, the oldest, finds the mango and scampers off to the kitchen in search of a knife. A few minutes later another fruit falls, and the children dash off in search again. Yusmarely sits in a plastic chair and laughs with each new treasure hunt, doling out hugs and smiles in between searches.

For the past few weeks the two overladen trees surrounding their home have been raining mangos, giving Yusmarely a reprieve from hungry bellies and the daily scramble to find food. Like most mothers across Venezuela, the Venezuela food crisis means Yusmarely is forced to juggle meals, strategically deciding when to feed her children so they feel the least amount of hunger. 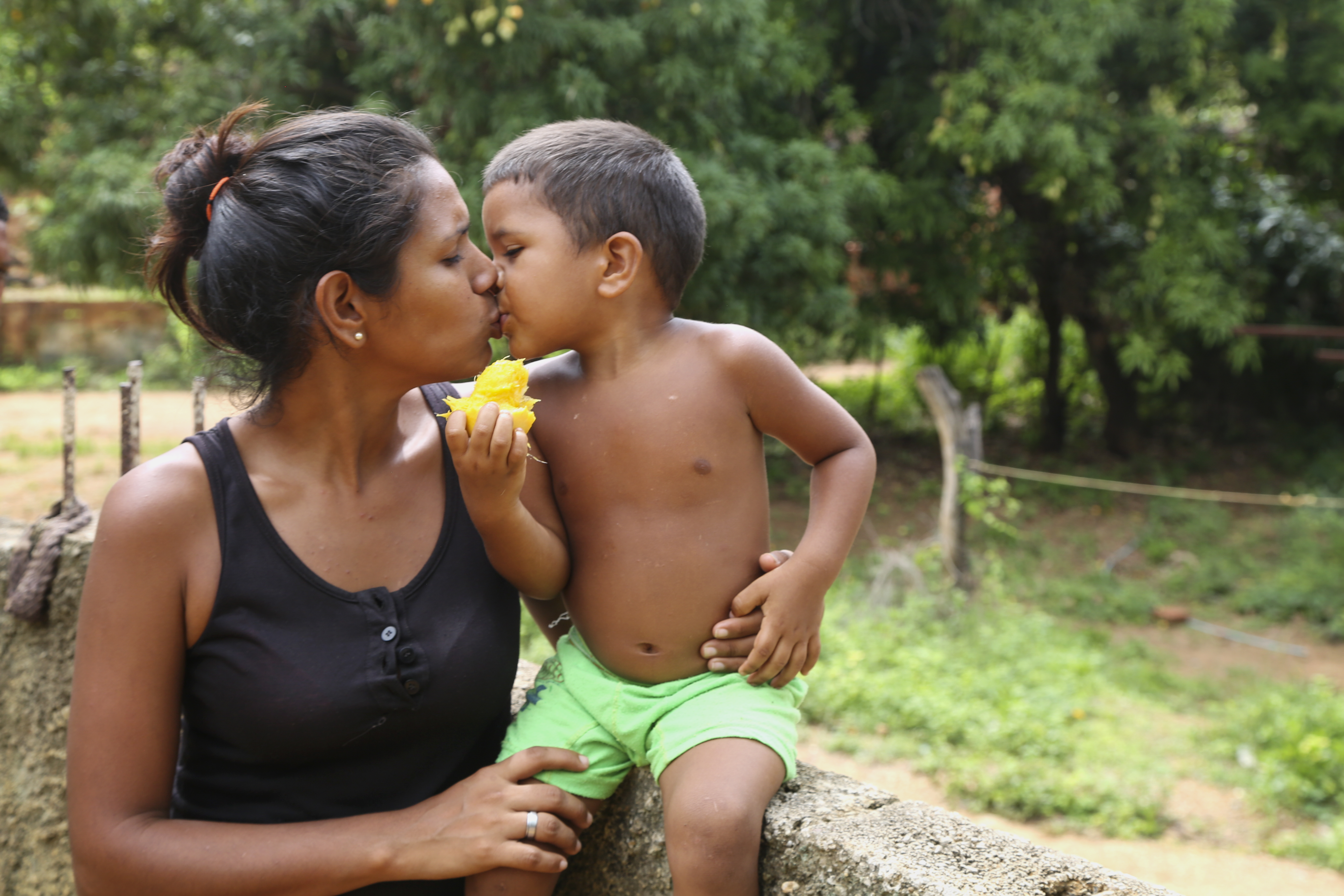 Yusmarely Acuña, 29, gets a kiss from her son Greivis, 3, outside their home in Venezuela.

“I don’t have enough to give them three meals a day,” says Yusmarely. “I try and feed them at eleven or noon so they’ve eaten before they go to school and then again at seven or eight so they go to bed with dinner.” Mangoes in the morning means lunch can be served later and her children will be full enough to not ask for snacks.

Each day the prices inch up. Yusmarely has become accustomed to the long lines that last hours to buy something as simple as corn meal to make the Venezuelan staple arepas– one bag alone can eat up half the average monthly wages of $1.50. Galloping inflation, which according to the Venezuelan finance commission was 82,766 per cent between July 2017 and July 2018, has decimated Venezuelan spending power. What Yusmarely pays for a kilo of eggs today might double in price only a few days later.

A mother’s desperate search for food

At the start of the year, the mangoes were not yet in season and the yucca she’d relied on was a gamble. There were two types, one that was edible and another that was toxic. To the untrained eye they’re indiscernible. One day she purchased the wrong variety and both her mother and daughter fell ill. She vowed to never buy it again. In desperation she took to the streets in search of food.

“The rice costs half of what I’d earn in a month,” she says.

“The pain a mother feels when she does everything she can to feed her children and comes up empty. Months ago I had nothing to give them. It broke my heart to have to put them to bed with only a glass of water.”

The waistlines of the entire family shrank. Her six-year old Grendimar became so thin she would cry and sleep throughout the day. “She was so thin you couldn’t even see her in the bed,” says Yusmarely. “When I bathed her she was all bones.”

Donate to our Venezuela Appeal

Each week the local Caritas holds a nutritional monitoring session for children under 5. Grendimar was a few months older than the threshold but that didn’t stop Yusmarely from bringing her and 3 year-old Greivis and pleading with the staff to have them checked.

In the past year the average Venezuelan has lost more than 10 kilos. Acute malnutrition in children has hit a staggering 16 per cent more than triple the World Health Organisation threshold.

In response, Caritas has worked with local parishes to start growth monitoring for children under 5 and enrolling children who qualify in a feeding program geared to push their weight up. To date more than 15,000 children have been assessed with 65 per cent showing signs or risks of under-nutrition.

Read more about Caritas projects to help children in Venezuela

“I asked the doctor to check Grendimar and let me know if her weight was appropriate for her age,” says Yusmarely. They weighed her, measured her arm diameter and concluded she was at risk of malnutrition. They agreed to follow her and provided nutris (a type of nutritional supplement) for Grendimar and Greivis. 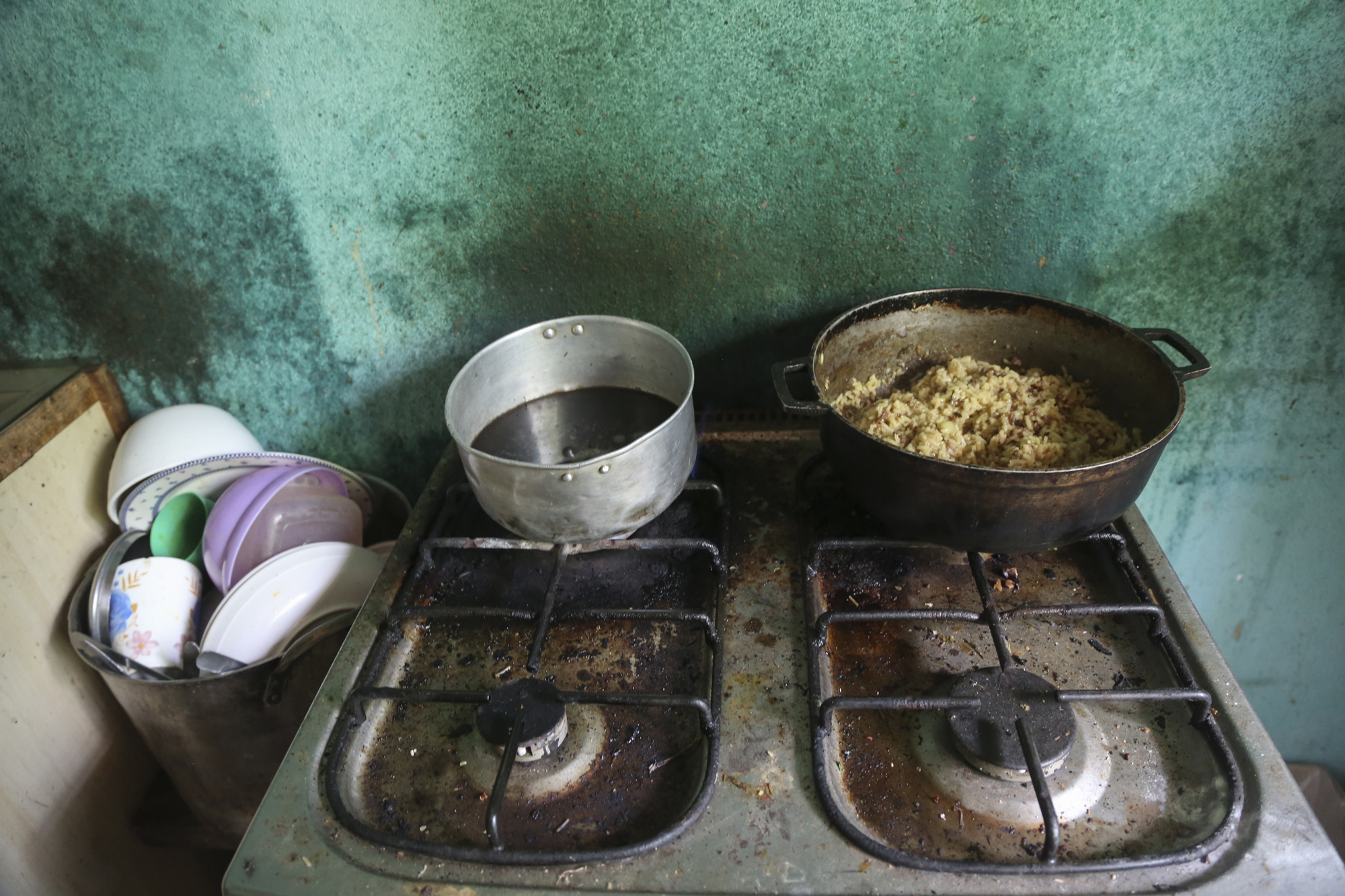 Lunch for six children and three adults cooks on Yusmarely’s mother’s stove. The ingredients in the two pots are almost equivalent to what the average Venezuelan earns in a month.

In the past few months the children have been transformed. Gone are the days that Grendimar sleeps and cries. Greivis now spends his day riding his push car back and forth across the courtyard, Valentina, runs round and round the mango tree in front of their house chasing after her younger cousins, while Grendimar often slips into her grandmother’s living room and switches on the TV.

She expertly flips past the cartoons until she lands on her favourite channel, one dedicated to cooking shows. The word “Eat” flashes on and off the screen. “She watches the shows and asks me to buy the ingredients to make the recipes,” says Yusmarely.

Three times a day, Yusmarely takes out a fuchsia plastic pitcher and fills it with freshly boiled water. She scoops the pink strawberry flavoured powder into the water and deftly whisks it into until the lumps disappear.

Without having to call her children they saunter into the kitchen, licking their lips in anticipation. She pours the liquid nutrition into metal cups and hands them to each of her children. 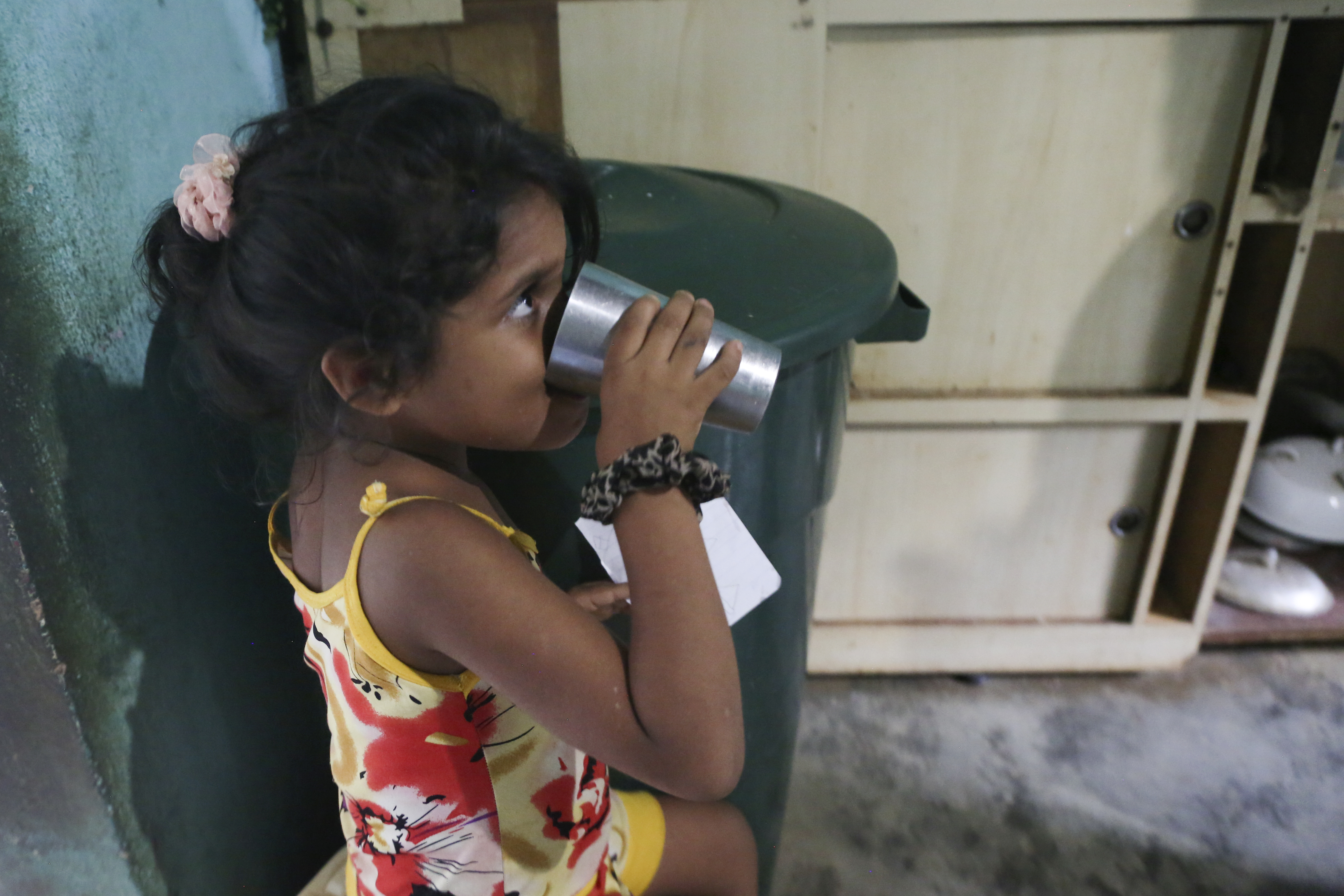 Grendimar drinking a nutritional supplement given by Caritas Venezuela volunteers.

“Whenever we get the nutris, Grendimar wants to drink it all up that same day,” says Yusmarely. “But we have to follow the regimen. When we first started getting the nutris I’d ask my mom, am I imagining it, or is Grendimar putting on weight?” Seeing her daughter’s frame begin to round out pulled her out of depression. “It helped to raise my self-esteem,” she says.

When her children hand their cups back to Yusmarely there is not a drop left in their glasses. Greivis sports a light pink moustache, which he quickly licks away with a swipe of his tongue.

Thanks to the Caritas nutrition feeding program, Grendimar has gained weight and no longer registers as undernourished.

Recharged and ready for play

Their bellies full, the children scamper off. Valentina asks her aunt to draw a flower on her hands and cheeks. Grendimar and Greivis play with their visiting cousins at making a meal. “We’re making chicken with rice,” they say as they stir in plucked leaves into a bit of water they’ve poured into the remains of a plastic toy truck. When it’s time to serve the meal, the cousins dole at the “food,” saying, “get it while it’s nice and hot, but eat it here inside, there are lots of people outside and we don’t have enough to share.” 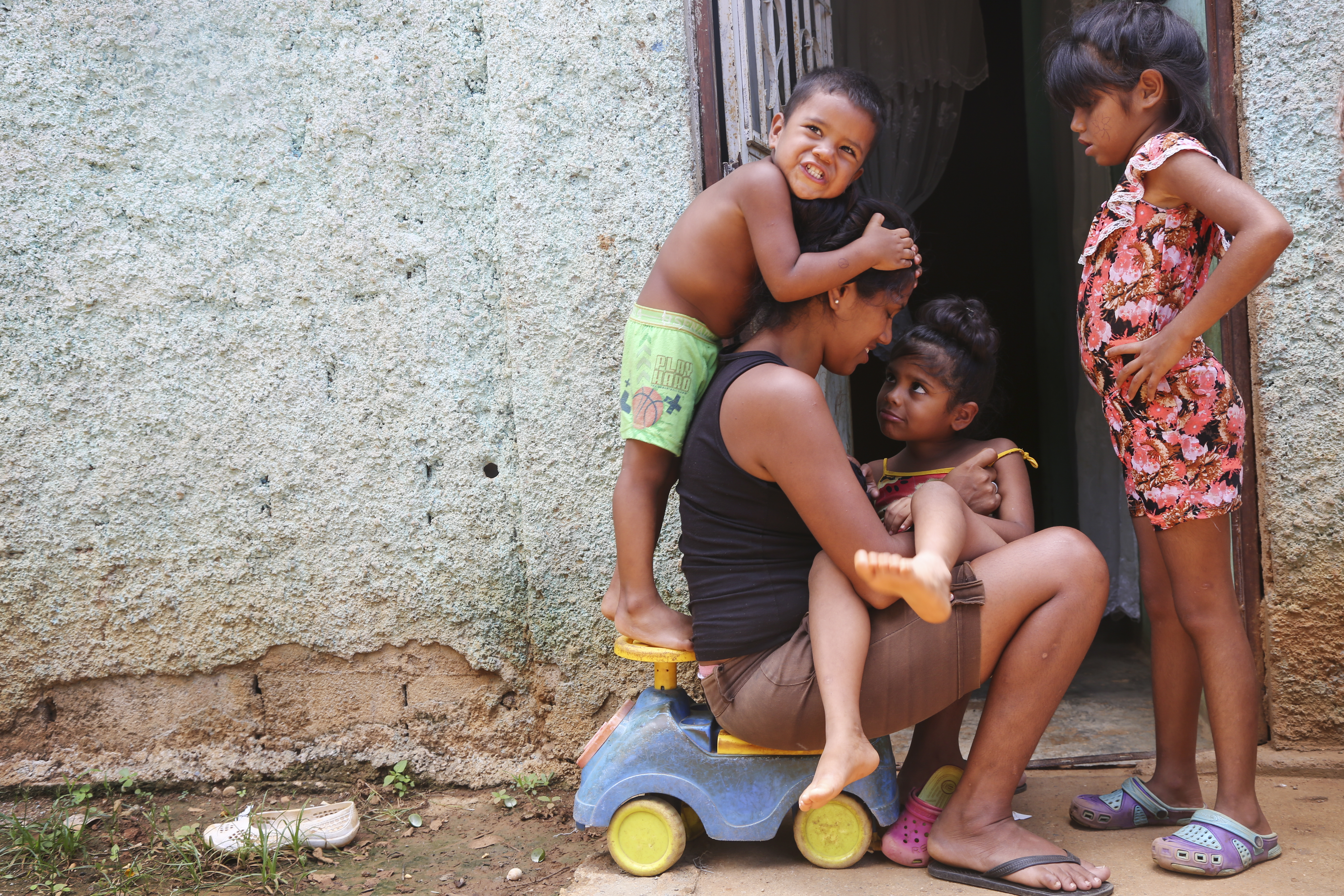 Yusmarelis Acuña, 29, snuggles with her daughter, Grendimar, 6, while her son Greivis, 3, climbs on her and eldest daughter, Valentina,7, chats with her outside their home in Tomuso, Venezuela.

Yusmarely takes a rest on Greivis’s push car. Seeing her he runs over scales her back to hug her from behind. Grendimar comes and climbs into her lap and Valentina wanders over to show off her freshly drawn flowers.

Their childhood may not be filled with the same trips to the park and bags of candies that Yusmarely’s was, but she tries to ensure that she makes up for what they don’t have with attention and love.

“What Caritas has done is incredible. They have helped pull so many children from malnutrition. I feel such joy when I see her with so much energy. Every day she weighs more.”

Yusmarely no longer worries about Grendimar’s clothes falling off, but she has a new concern. “I tell her don’t let your feet grow anymore, because how will be able to afford a new pair of shoes?”

Donate to our Venezuela Appeal today