With a powerful appeal signed by six presidents of continental bishops’ conferences, leaders of the Catholic Church call government leaders to take ambitious and immediate action to tackle and overcome the devastating effects of the climate crisis.

In the context of a recent UN IPCC report on the urgent need to develop policies that limit global warming to 1.5 degrees, Church leaders call politicians to work towards an ambitious implementation of the Paris Agreement for the people and the planet. They ask for the next United Nations climate change conference (COP24, Katowice, Poland, December 2018) to prove a milestone in the path set out in 2015 in Paris.

Their inspiration comes from the work done on the ground by the many courageous actors, within and beyond Catholic communities, who are spreading the Pope’s messages of Laudato Si’. In the appeal, they demand rapid and radical changes while resisting the temptation to look for quick technological fixes. Church leaders from Latin America, Asia, Africa, Oceania, and Europe are jointly calling on governments to take concrete measures to shift towards a fair share of resources and responsibilities, where the “big emitters take political accountability and meet their climate finance commitments”.

The call is based on the principles of urgency, intergenerational justice, human dignity and human rights. It revolves around some central points: keeping global warming below 1.5°C; shifting towards sustainable lifestyles; respecting the knowledge of indigenous communities; implementing a financial paradigm shift in line with global climate accords; transforming the energy sector by putting an end to the fossil fuel era and transitioning to renewable energy; and rethinking the agriculture sector to ensure it provides healthy and accessible food for everyone, with a special emphasis on promoting agroecology.

“We need a profound and urgent change in direction on climate change. We need to see a transformation at climate talks in Katowice. We can save the planet and those at greatest risk from the impact of extreme weather but we need the political will to make that reality,” Said Michel Roy, Secretary General of Caritas Internationalis.

Through this statement, the Church leaders also reaffirm a commitment to taking bold steps toward sustainability, a crucial contribution toward climate justice. Around the world, the Church is engaged in concrete initiatives to shift towards more sustainable communities and lifestyles, including a global movement for divestment from fossil fuels and a growing engagement in the Season of Creation. 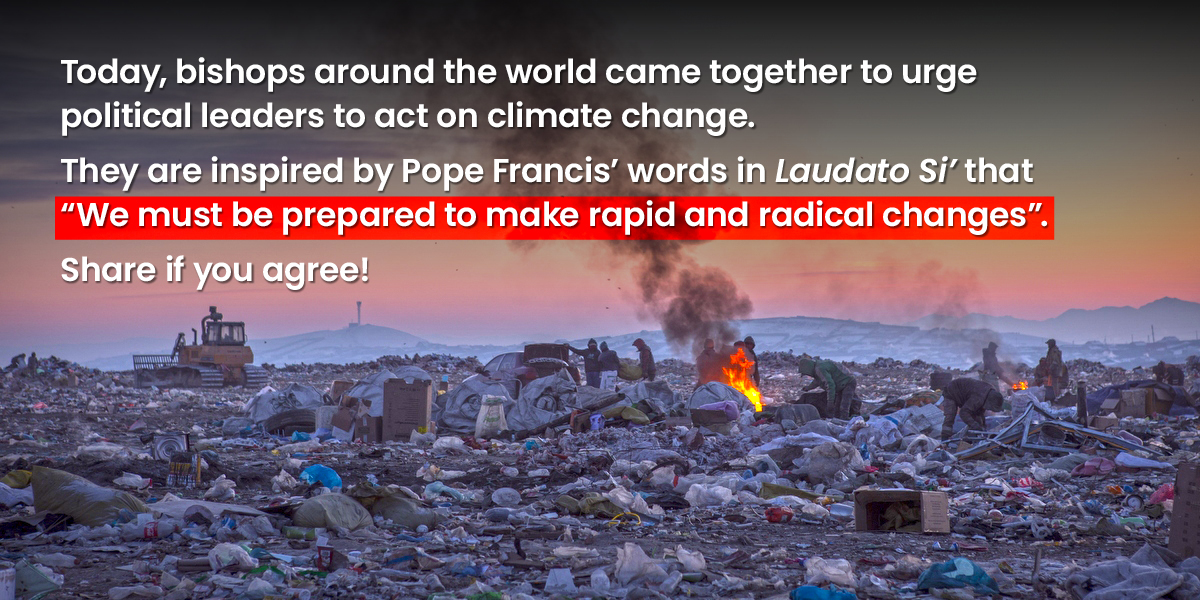 The statement is supported by the Catholic networks CIDSE, Caritas Internationalis and the Global Catholic Climate Movement.

“We are inspired by this call from the Church which recognizes many of the efforts that Catholic organisations are carrying out to achieve climate justice, energy justice and access to food. We also feel supported in our call for a deep societal system change and are grateful to be part of a global movement calling for this. We believe this can only truly happen by shifting to a post-growth economy.” said Josianne Gauthier, CIDSE Secretary General.

“This statement is a strong indication that the global Catholic Church is committed to accelerating action for climate justice. Church leaders are echoing Pope Francis’ emphasis on the urgency of the climate crisis. Every notch in the global thermometer is a tragedy for the most vulnerable, and we cannot lose even a moment to find solutions for them and for generations to come. The question is when political leaders will take up the challenge,” said Tomás Insua, Global Catholic Climate Movement Executive Director.