Keeping the faith during the Venezuela food crisis

The Venezuela food crisis is affected people in unexpected ways. Not only has it left thousands of people hungry and many children at risk of malnutrition – it’s now threatening the production of communion hosts. 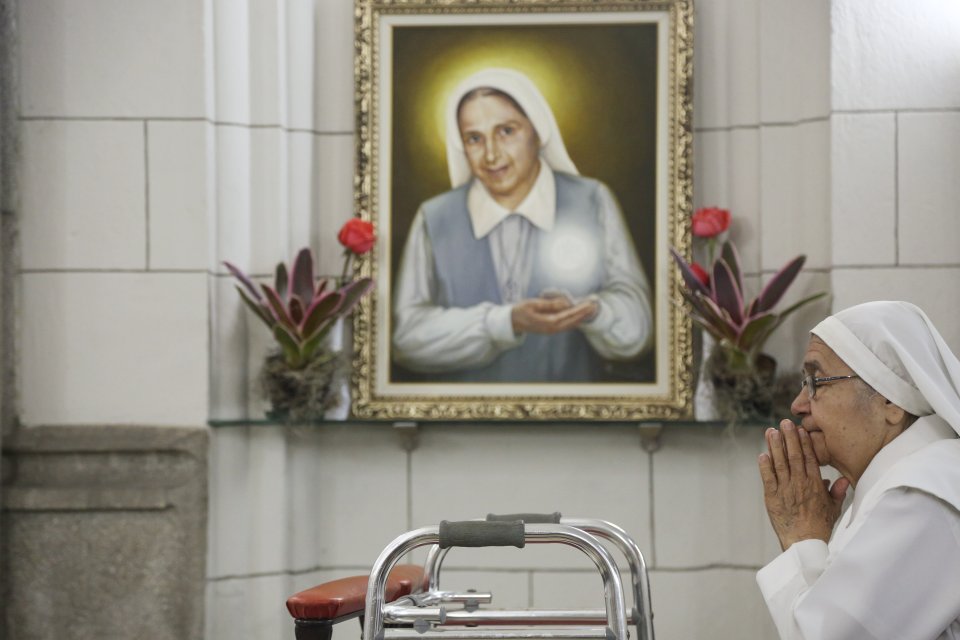 In Venezuela, a sister prays in the chapel in front of a portrait of their congregation’s founder, Sister Carmen Rendiles, who was recently beatified by Pope Francis. Photo: Caritas

Sister Carmen ladles a thin line of batter on to a heated black griddle. The machine hisses and steams as the mechanical jaws press the mixture of flour and water into a thin oval disk destined to become a communion host. A small strip of dough spills over the sides. Sister Carmen carefully removes it with a metal paddle and gently places the curl of dough into a bowl.

“We used to throw this away,” she says. “Not anymore.”

Thousands left hungry because of the Venezuela food crisis

The knocks on the Servants of Jesus door have become more frequent. Up to 100 people a day stop by asking for food. An estimated 87 percent of the Venezuelan population is living under the poverty line. The average monthly salary in July was scarcely enough to purchase a kilo of eggs.

For many, the Church has become a go-to place for those seeking to abate hunger. Congealed batter from host making can be prepared like pasta, added to soup or mixed into food to add consistency. These days nothing in Venezuela goes to waste.

Concern flashes across Sister Carmen’s face as the orange light of the press pulses on and off. She knew it might be a problem during morning mass when the chapel’s lights flickered threatening to blow out appliances or leave them entirely in the dark. An electrical surge recently short-circuited their cold storage unit.

Sister Carmen worries the 20-year-old wafer press might be next. Fixing their fraying electrical grid would cost a prohibitive 150 dollars or the equivalent of 100 monthly salaries at the time they received the quote.

“We can’t meet the demand,” says Sister Carmen. “The Mother Superior will ask for 50,000 hosts, and we can offer 10,000. The press simply can’t be pushed more. A Church needs to place their order three to four months in advance.”

Donate to help people affected by the Venezuela food crisis

Flour shortages due to the food crisis

Rampant flour shortages have left other congregations unable to prepare wafers. A kilo of flour produces 1,000 hosts and the sisters need 10 to 20 kilos a day to meet demand. The flour scarcity kept Sister Carmen up at night. What if she weren’t able to make the wafers? What if people weren’t able to take communion and had to settle for a blessing? 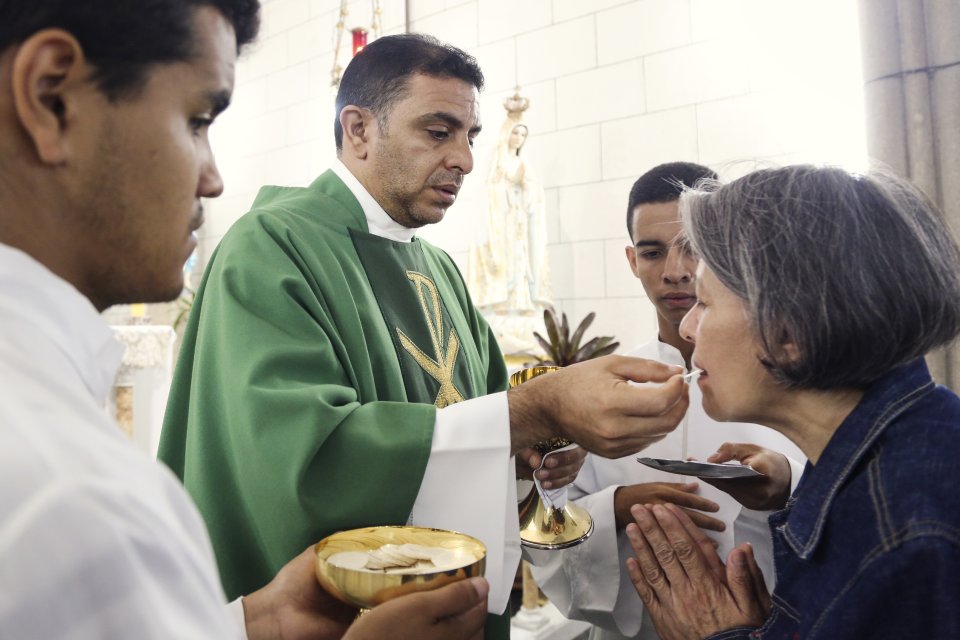 A call out went out to parishes in the capital of Caracas in the lead up to the Lenten season. The Sisters received 345 kilos and residents of the capital were able to take communion in the holiest week of the year. In the outskirts of Venezuela neighboring countries send hosts to avoid shortages. Still some churches only offer communion on Sundays and are often forced to split the hosts so that they have enough for everyone.

“If you go to the bakeries the windows are empty,” says Mother Superior María Concepción. “For people to buy 2 kilos of flour they need to wait in line for two to three hours.”

Help from the USA

Sister Carmen’s worries about sourcing flour were assuaged when the congregation’s founder, Sister Carmen Rendiles was beatified in July infusing the Sisters with much-needed hope. The story made its way to the U.S. where supporters in Florida sent 50,000 hosts and enough 50-kilo sacks of flour to last the Sisters for several months.

With the sacks stacked high around the workroom, it’s now the longevity of the press that keeps Sister Carmen tossing and turning. When one problem is solved, another arises.

Donate to our Venezuela crisis appeal 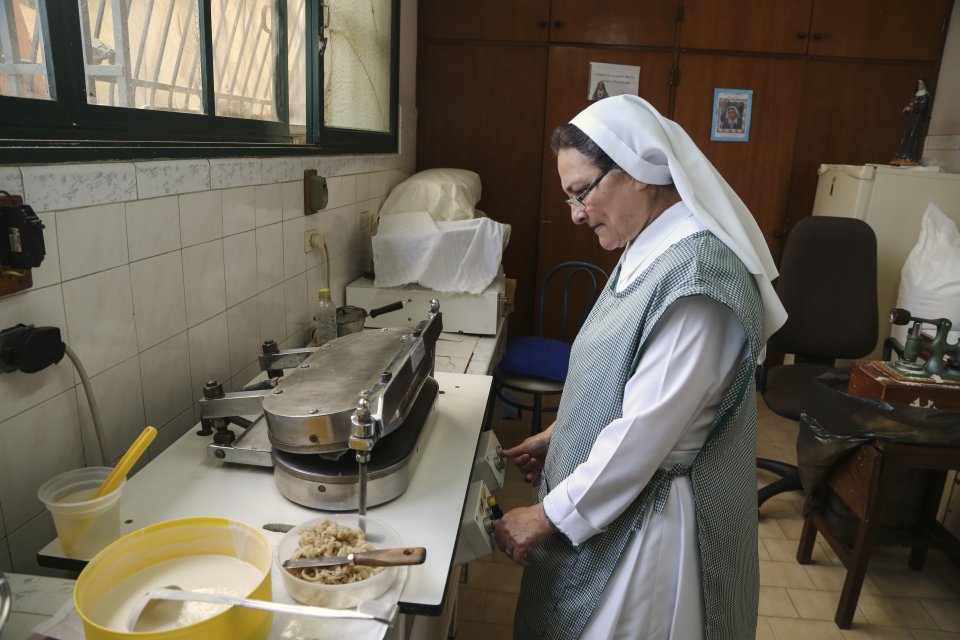 The press stops hissing and the steam dissipates. When the electricity oscillates hosts take twice as long to prepare. The steel jaws lift revealing an oblong disk with thin, uneven spots.

“It’s not supposed to look like this,” says Sister Carmen. “It’s supposed to be perfectly white and even, but when the temperature fluctuates, it distorts them.” With a few scissor snips, she removes the rough edges and places the discards in a bag.

Sitting at the forest green wafer punch Sister Carmen slides the disk in between the two plates and firmly presses the lever down. A rhythmic mechanical popping accompanies her work. Round wafers embossed with an image of the Holy Spirit accumulate as the scraps fall into a large plastic bag.

Eating the scraps from making the host

The cleaning ladies were the first to ask for the remnants. “We can grind it up and add it to the cornmeal we use for arepas,” they told her. Soon others were knocking on their door asking for the discards. What was once meant to be spiritual sustenance is now also helping to abate hunger.

Those picking up scraps to add to meals or hosts for use in Church services need to bring their own containers. The Sisters can no longer afford the cost of plastic bags to bundle them up. 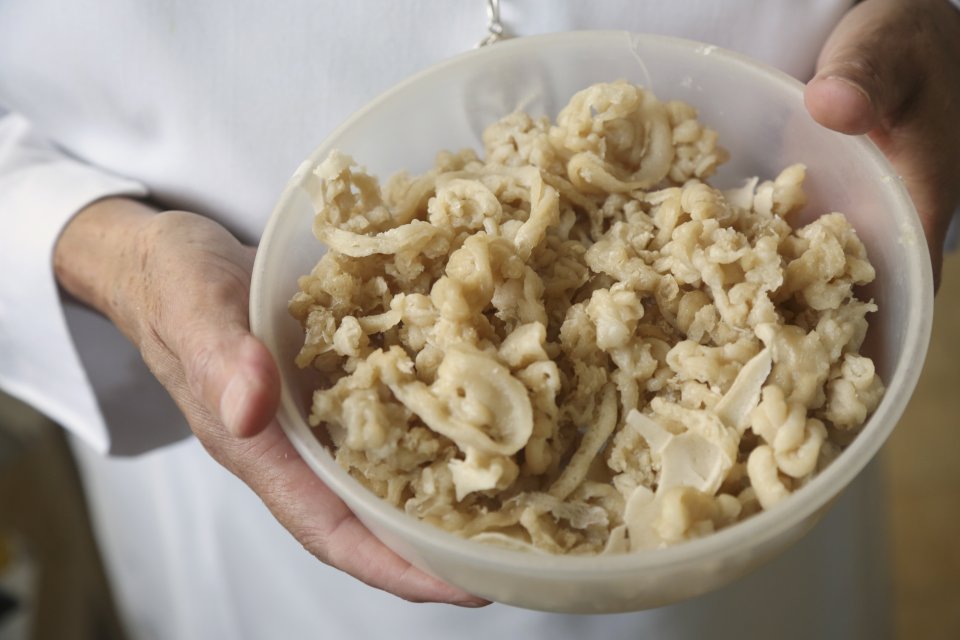 Sister Carmen of Las Siervas de Jesús de Venezuela with a bowl of the left over bits of dough from making communion hosts at her Congregation in Caracas, Venezuela. Photo: Caritas

“We have to be creative when it comes to food,” says Mother Superior María Concepción. “We don’t eat like we once did. Now we survive on pasta, rice, and flour. Those who eat meat are fortunate. When it can be found it costs more than a monthly salary.”

Rampant inflation estimated to reach one million percent by year’s end has decimated Venezuelan spending power. Spare change is a concept of the past as price tags in the millions has all but broken the cash economy. People rely on cash transfers to pay for most goods and services.

In church, offertory baskets are no longer passed around. Few have money for tithing, although make up for it in volunteering. The Church in Venezuela much like those it serves has been pushed into extreme austerity.

“I’m the one who does the shopping,” says the Mother Superior. “Items will cost one price one week and triple the next.” Escalating prices extend to all goods and services across the country. She worries most about the aging nuns. “We have sisters with high blood pressure, others with diabetes, we can’t find medicine for them,” she says. “If you’re able to find antibiotics they cost five times the monthly salary.”

Donate to help those in need in Venezuela

“We don’t know what to do anymore other than pray.” People knock on their door, and they offer whatever food they can. The Mother Superior says, “We don’t deny bread to anyone who rings our doorbell. We try and motivate people, try to make them understand that this too shall pass. But these people haven’t eaten in over 24 hours and hunger doesn’t know how to reason.”