A story of hope during Advent

Senowara’s labour pains had already started when she fled from Myanmar 16 months ago. After five days walking through the forest, she could hold on no longer. Her child was born by the roadside, beneath a tarpaulin, just an hour and a half after she crossed into Bangladesh.

We first met Senowara, a Rohingya refugee, in October 2017 and brought you her story. Inmanuel from our Caritas Bangladesh team has visited to find out how she and her family are doing. 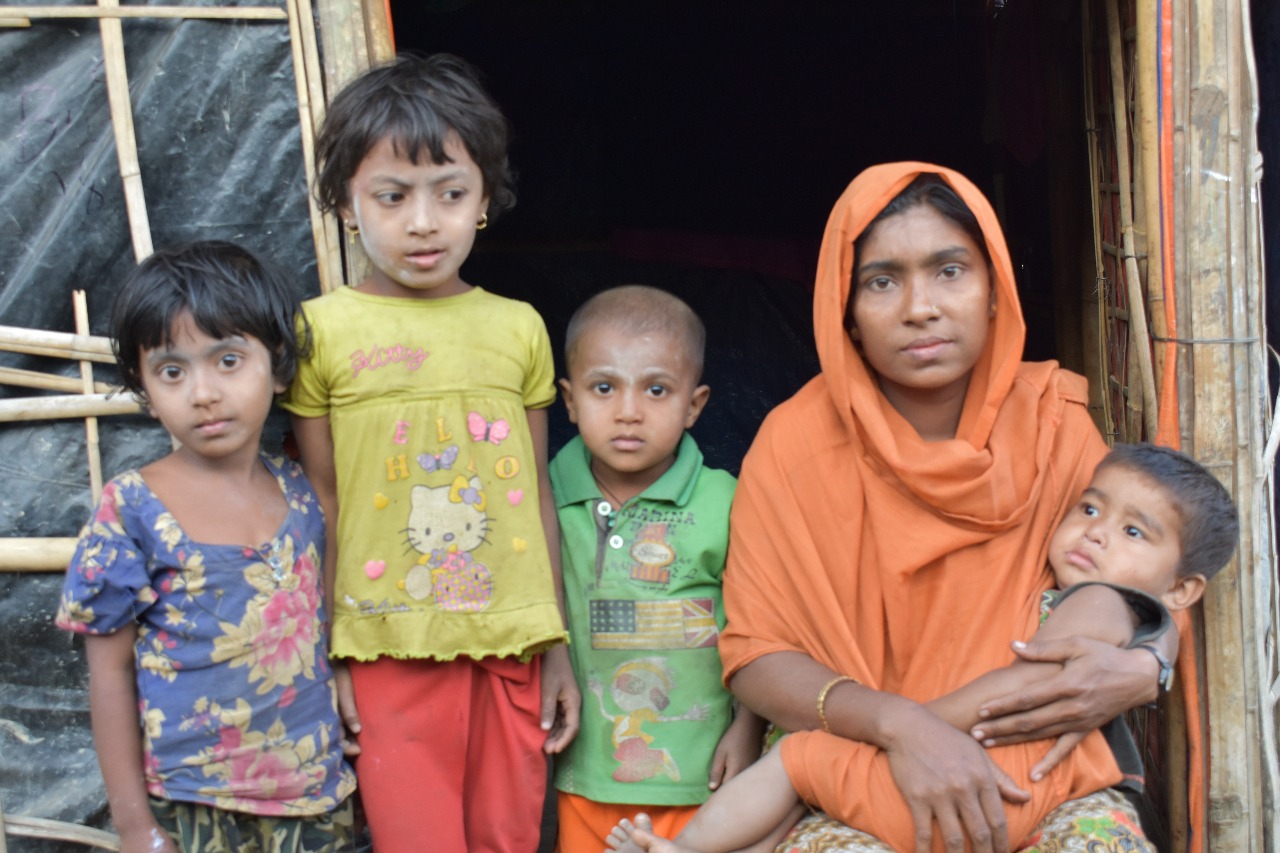 “The first thing I noticed as I entered her home,” says Inmanuel, “was that Senowara’s face exudes joy and satisfaction, and no longer the sorrow and suffering she had to endure when she got here.”

And the baby? Little Korban, now 16 months old, is peacefully asleep in a makeshift hammock. His three siblings are out playing in the Child-Friendly Spaces created at the camp. “We are safe now,” says Senowara.

Caritas has helped nearly half a million Rohingya refugees over the last year. Our core team in Bangladesh may be relatively small, but the global network of Caritas organisations is behind them, bringing funds and technical know-how when needed.

From the first urgent provision of food and shelter, our programme has grown to include digging tube wells, building hundreds of latrines and bathing areas, planting trees and strengthening shelters.

The Caritas Bangladesh team are with the refugees every day, getting to know them, listening to their concerns and celebrating their achievements.

Donate to Caritas this Advent so that we can continue to coordinate emergencies like the Rohingya refugee crisis.

In August 2017, aged just 25 and heavily pregnant, she had to grab her three children and run from her village in Myanmar. “When the army chased us we started fleeing towards Bangladesh,” she recounts. But her husband was not with her.

“My husband was shot in the leg while escaping from Myanmar, and he was taken to Bangladesh for his treatment without me, as my labour pains had started.”

So Senowara’s little group fled without protection into the unknown. “God alone knows how I managed to get here in my state,” she says. “Every step we took was harrowing, and I had to walk for five hours a day.”

Mercifully she had her sister-in-law with her, Shetara, a resourceful midwife who supported her through the traumatic birth in the open. She protected her from view with a tarpaulin, and cut the cord with a bamboo splinter.

So Korban was born into the life of the refugee camp. Senowara was helped to a clinic by local people. “I was amazed by the generosity they showed me, a stranger,” she recalls.

While in hospital, she received more good news. Her husband was alive and on the mend, and was with a relative nearby. Senowara’s family was soon reunited. 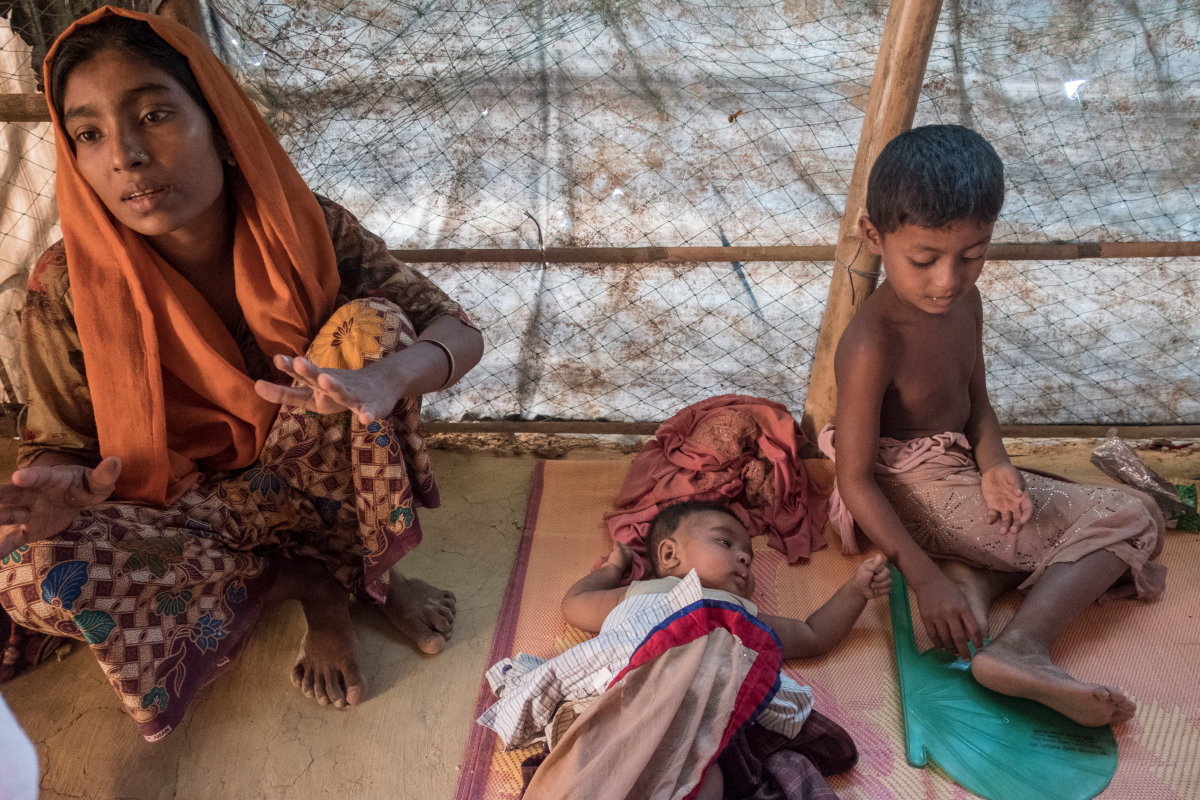 Senowara and her children in October 2017. Photo by Mahmud Rahman/CRS

“Many people came to help us”

“When we came here,” explains Senowara, “this area was just jungle-covered hills. We were exposed to the sun and rain by day, then at night we were afraid of the dark and the elephants. We had nowhere to live, nothing to eat. But one by one, many people came to help us.”

This was when the family arrived in the Caritas Bangladesh area of the refugee camp. They received building materials, cooking pots and utensils, and food supplies.

“Most of the things I have in my house I received in my previous camp from Caritas,” explains Senowara, who has since been moved to another zone. Although her husband cannot do heavy work after his injuries, at least the family has a life free from fear.

“I can still remember the life we were forced to live in Myanmar,” she says. “We were afraid all the time. We couldn’t travel or work in other places, because it was prohibited. At last my family and I are safe from any kind of torture or persecution.”

She adds simply: “We can leave the door open when we sleep.”

Now their immediate concern is for regular work, and for their children’s education. “If we die,” Senowara asks, “what will their future hold? How will they survive? We want an education for our children, so that they can have a bright future.”

No to forced returns

She and her husband are all too aware that their longer-term prospects as refugees are highly precarious, “one of uncertainty and hardship all around,” as she puts it.

Conditions in a camp of nearly a million people do not make for a normal life, yet Caritas believes repatriation to Myanmar is impossible while security for the Rohingya cannot be guaranteed. There must be recognition of their legal status as citizens, and adequate reconstruction and development in Rakhine state, where virtually all their villages and crops have been burned to the ground.

“We will only return if they give back all our belongings and our rights,” says Senowara. “We came here after suffering brutal torture. We will not risk the same treatment by going back there without any guarantees.”

“Let us not close our hearts, or look the other way,” said Pope Francis, who wept when he met a group of Rohingya refugees last December. “May each of us respond in his or her own way.”

Visiting the Bangladesh camps a week ago, the President of Caritas Cardinal Luis Antonio Tagle spoke powerfully of the difference that a team like Caritas Bangladesh can make, when the strength of the whole Caritas family supports it.

“The mission of one community becomes the mission of all,” he says. “I see here the hope that the Caritas confederation can bring to people – our witness of care and concern for any person, no matter who that person is. For as long as they need solidarity, love and compassion, Caritas will be there.”

Please donate to Caritas this Advent