Everyone assumed that Ahmed Abu Watfa would not live to see his first birthday. From birth it was clear that something was seriously wrong. He could not suckle, milk that he was fed came back through his nose, he lost weight and different medicines he was given made no difference.

His family lives among a warren of alleys in Al Shati Refugee camp, one of the most impoverished parts of conflict-ravaged Gaza. His 24 year old mother, Om Muath, says that on seeing the decline in her baby’s health, neighbours advised her to bid him farewell as they believed that he would not survive.

People had every reason to expect a tragic outcome. Ahmed’s family lives in poverty, with he and his two brothers and their parents sleeping in one room. His father works as a driver earning $1.5 a day. With Gaza’s healthcare system in crisis, the family had no chance to seek the care the baby needed. 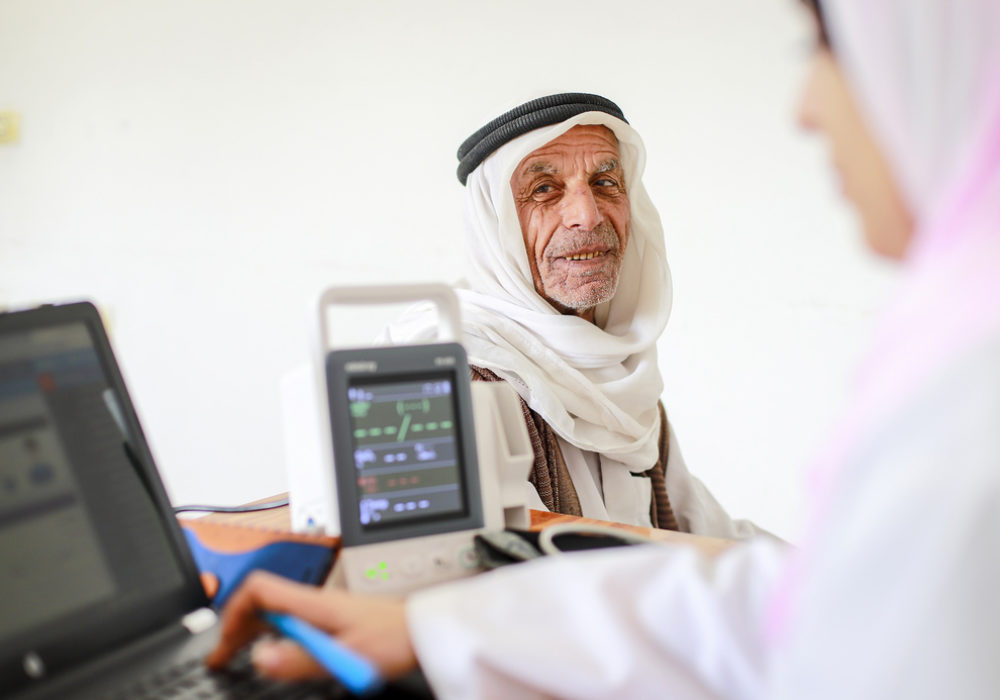 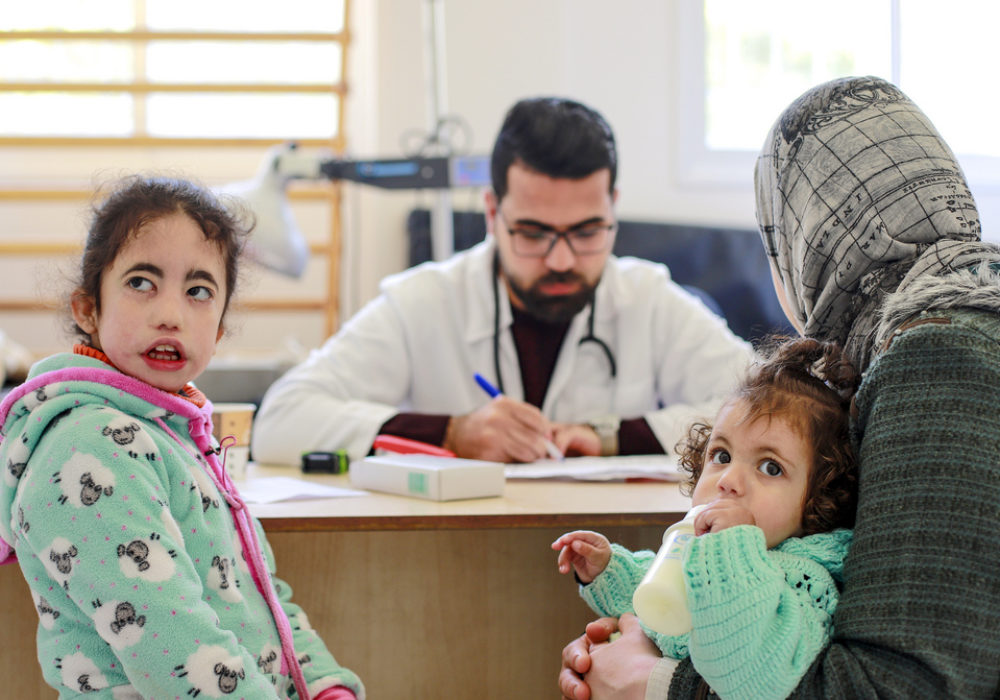 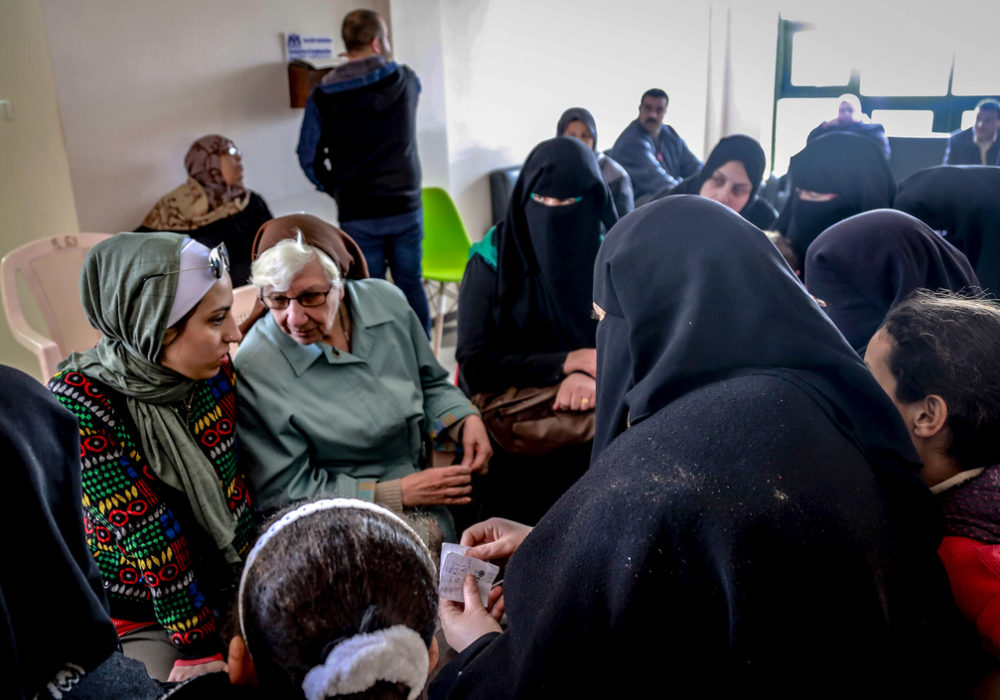 The acute health needs of the most vulnerable communities in the occupied Palestinian territory need $32 million for 2019.

There are 900,000 people out of the 1.2 million Palestinians in need of humanitarian health assistance.

DONATE TO OUR GAZA APPEAL

When Caritas Jerusalem staff announced a project for sick and underweight children, Ahmad was about six months old. His mother brought him to the clinic on the outskirts of Al Shati Camp where a doctor examined him. She found him severely underweight, his muscles wasted, his eyes sunken and his skin dry and fragile.

A physical examination and a range of lab tests, all available in Caritas clinic, plus the expertise of a doctor, led to a correct diagnosis and treatment. Ahmed was suffering from a rare condition knows as Pierre Robin Syndrome. He was severely malnourished due to his inability to suckle. He had a cleft soft palate, receding chin and displacement of the tongue.

Caritas helped Ahmad’s mother to feed him a nutritious diet. He gained weight and became more mentally alert. At one year old he had surgery to correct the cleft palate. He will have surgery on his chin when he gets older.

Now three years old, Ahmed is in good health, eating normally and physically and mentally as well as his peers. Sister Bridget Tighe was in charge of Caritas centre when Ahmed first arrived. She said, “It’s hard to believe that this healthy-looking little boy is the same emaciated baby who was at death’s door when he came to us”. 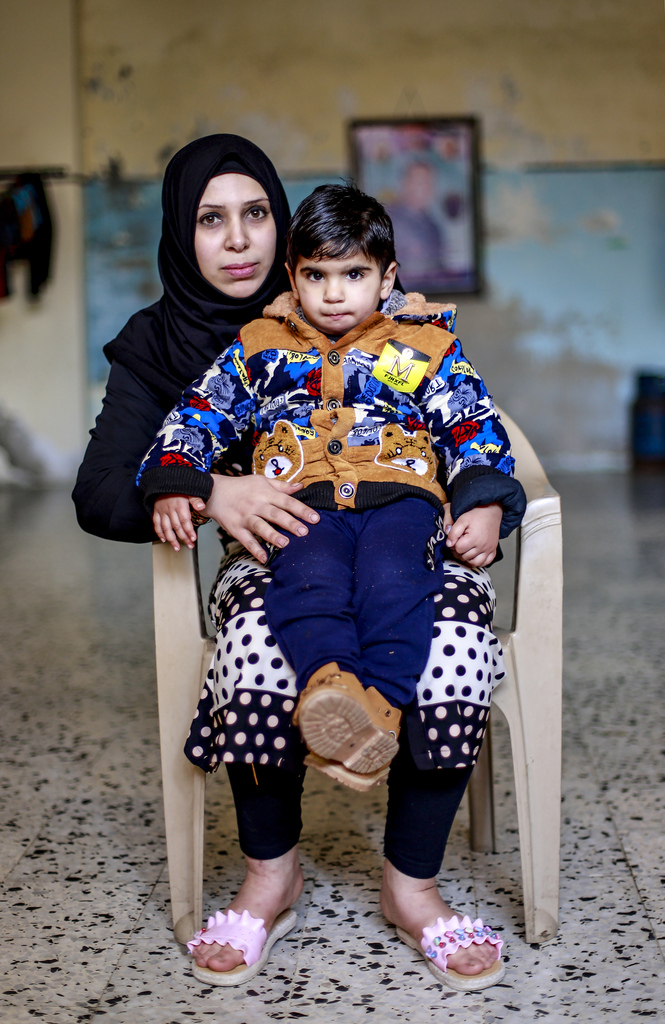 “Caritas has inspired me to support people as much as I can … Even if it’s just directing them to the medical centre.”
– Om Muath

80percent of Gaza population lives below the poverty line 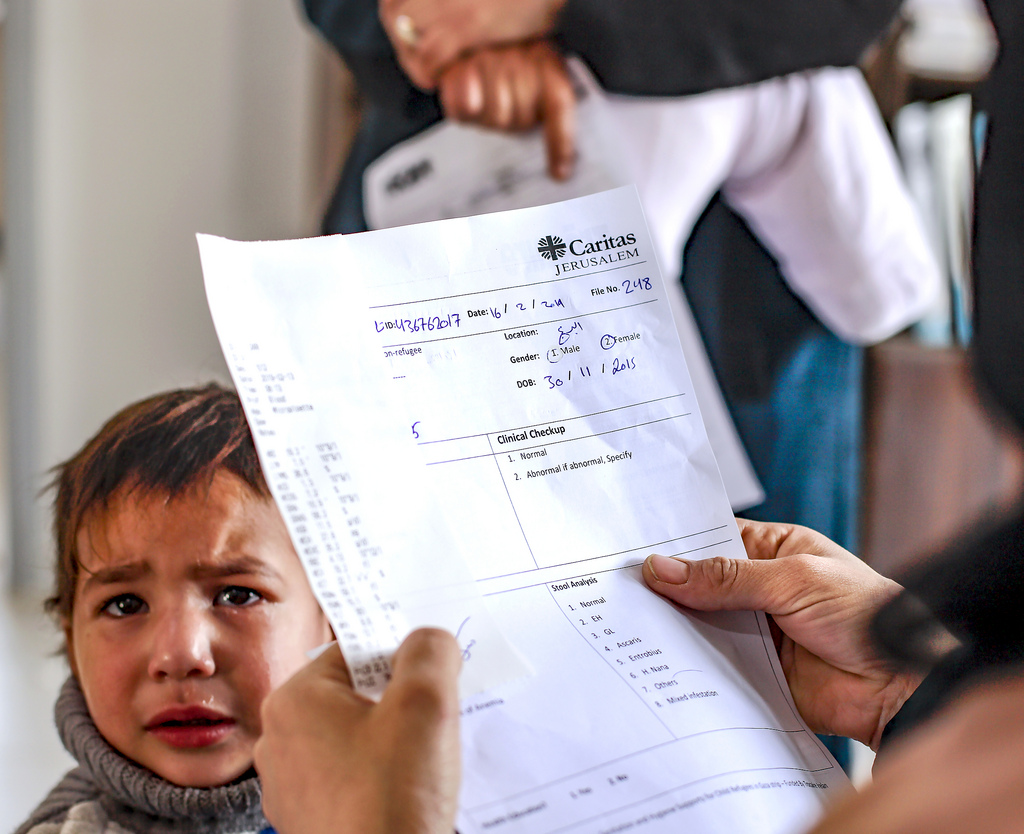 Gaza is a strip of land about 40 km long and 6 to 12 km wide. It houses about two million people, one of the world’s most densely populated regions. Faced with an average of 5.7 births per woman, Gaza cannot meet the needs of a rapidly growing population.

Israel and Egypt have imposed a security blockade on the enclave since 2007. The World Bank says this has caused Gaza’s economy to collapse.

Extreme poverty is visible, the unemployment rate is very high, and income per inhabitant is very low. Eighty percent of the population lives below the poverty line and depends on external aid.

The people of Gaza are facing increasing uncertainty over their future. Palestinians have been staging weekly protests against the blockade since last March.

In early February, the US Agency for International Development (USAID) ceased all assistance to Palestinians in West Bank and Gaza. Last year Washington cut hundreds of millions of dollars of aid to the Palestinians. This included funding to humanitarian groups supported by USAID. Experts say the withdrawal of US aid will have a deadly effect on the already precarious lives of people in Gaza.

National hospitals don’t have the capabilities to deal with the huge number of injured by Israeli forces during the demonstrations. Moreover, since the withdrawal of USAID funding to Palestine more people are seeking the aid of Caritas.

Ahmed Abu Jamous, 13, lives in Al-Shaboura refugee camp, in Rafah, Southern Gaza Strip. He was wounded in his left leg during protests in July 2018. The road to his house, pitted by rain-filled potholes and lined with dilapidated buildings, underscores the poverty of his neighbourhood. He sleeps on the floor on a thin mattress beside his eight siblings.

More than 250 Palestinians have been killed and 26,000 injured by Israeli troops during protests against the blockade. Two Israeli soldiers have died. The UN says that out of the total 14,072 referred to Gaza’s emergency departments at hospitals, 6,239 cases were live ammunition gunshot injuries. This is 44 percent of the total casualties arriving at the enclave’s hospitals.

“A neighbour, who got a similar injury, told me that there’s an excellent free medical treatment provided by Caritas at Al-Shaboura refugee camp.”

“I used to go there every Thursday, when doctors gave me medicine, measured my blood pressure, and cured my wound,” Ahmed said. “I was able to see my leg recover fast.”

Now he hopes that one day he will be able to play football again. “He used to limp, and was getting angry very fast, due to his long stay at home,” his mother said. “When he recovered, he became calmer, satisfied, and walked normally again.”

“If there wasn’t such treatment from Caritas medical team, I wouldn’t expect this fast recovery,” she said. His mother hopes Caritas can continue helping in poor areas like hers, where people can barely afford daily living expenses. 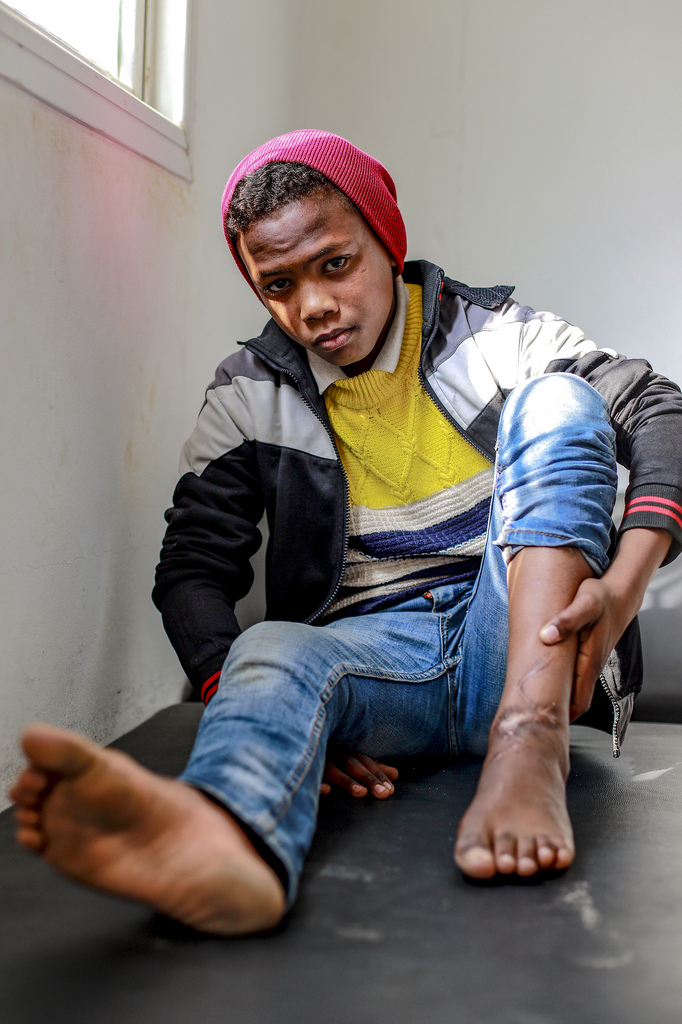 Out of the over 14,000 people recovered by Gazan emergency rooms, more than 44% had been injured by gunshots or other live ammunition. (UN)

Caritas Jerusalem is working in Gaza alongside other organisations to help people to try to overcome the hardship and obstacles resulting from the blockade and years of conflict.

To date, Caritas provides a wide range of medical and psychosocial services in Gaza for local communities and refugees in its main clinic in Al Shati Camp, Gaza City. Mobile medical teams work in collaboration with up to 20 local community-based organisations throughout the Gaza Strip.

Caritas health centre in Al Shati camp has a female gynaecologist, dentist and general practitioner with nurses, pharmacist and lab technician. They help the most vulnerable families in this poor area. It is also the administrative hub. 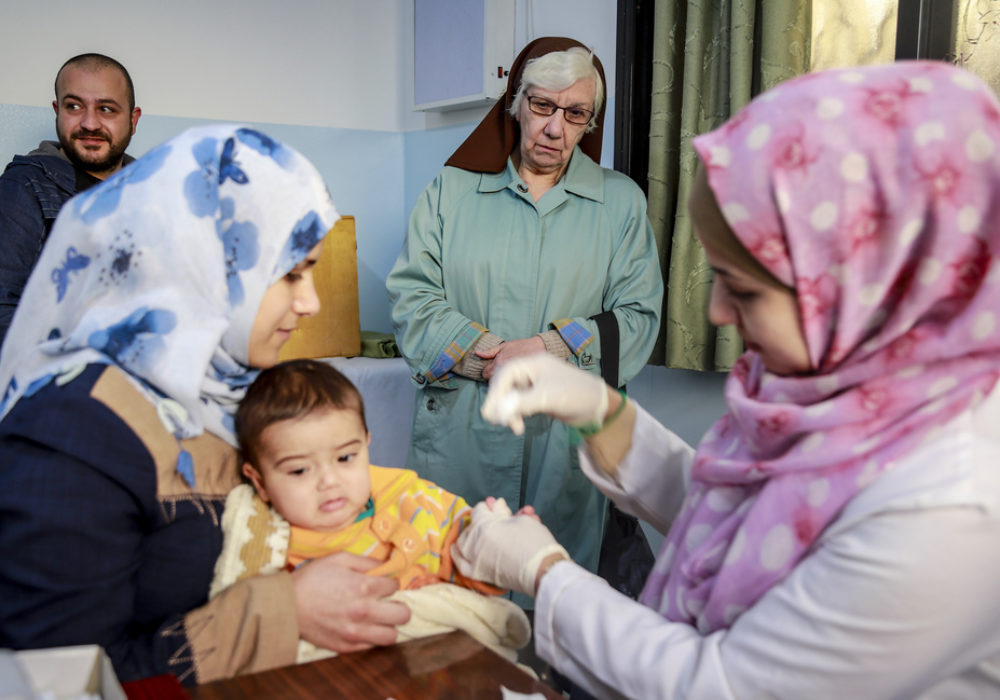 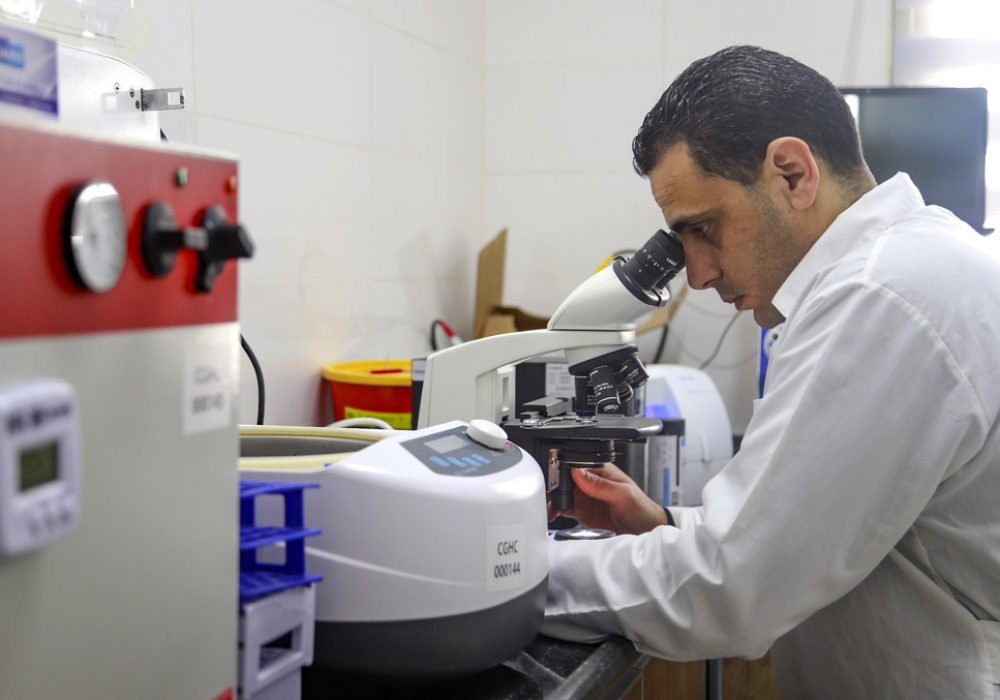 The mobile medical teams travel daily to some of the poorest and most marginalised areas in the Gaza Strip. Caritas services include primary healthcare services. They cover the treatment of anaemic children, blood tests, medication, fortified milk and biscuits and health education.

Among other services, Caritas also provides a programme for the elderly. Its major focus is on the treatment and prevention of non-communicable diseases. These include high blood pressure and diabetes.

Caritas also offers psychosocial intervention and leisure activities for children traumatized by wars; and dental health and education with dental examination and treatment for children aged 5 to 12 years.

Caritas has organised local health committees to develop the capacity of local leaders and community workers. They receive advanced training and experience in leadership, strategic planning, project application and budgeting.

In great demand are Caritas primary health care services to vulnerable communities, including women and children suffering from malnutrition. 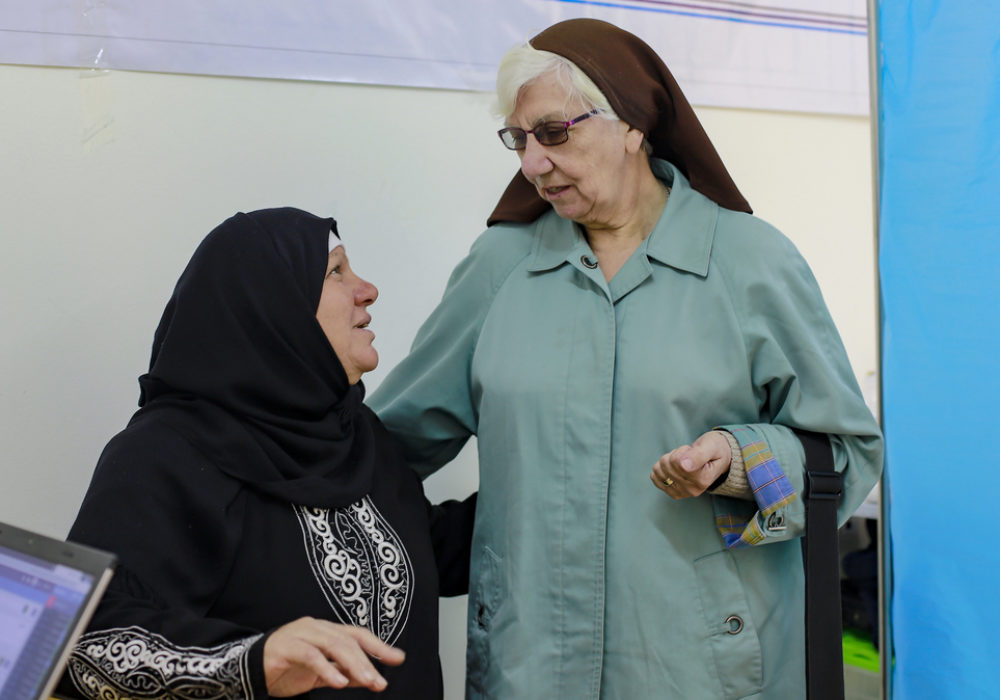 Women and children at risk 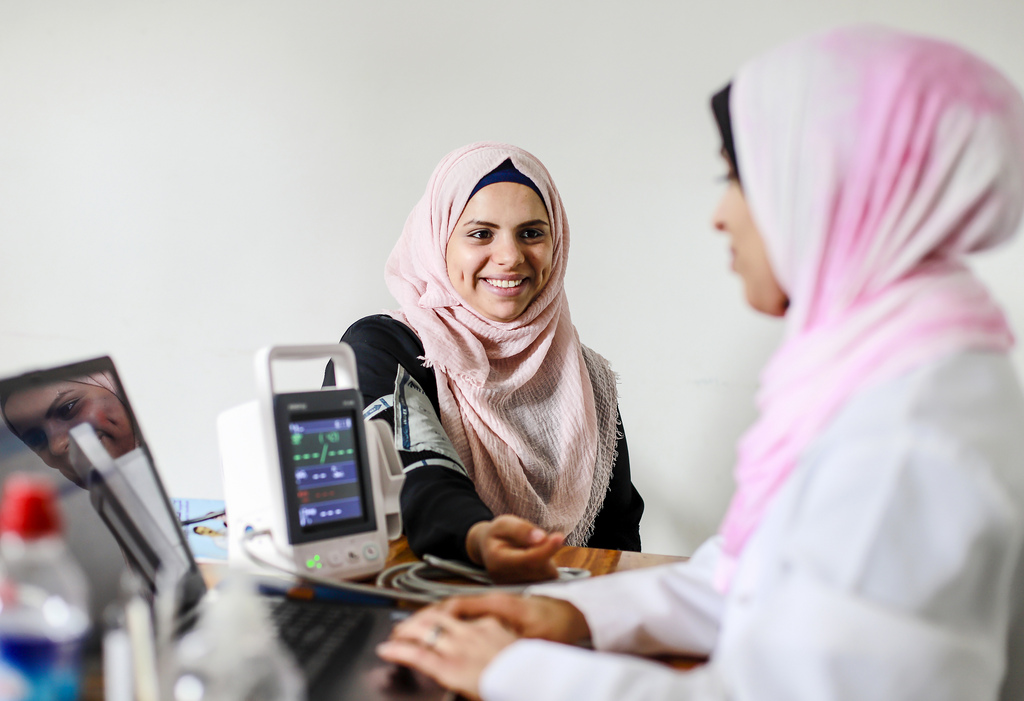 “They (Caritas) were very kind, and helpful, they never hesitated to give support whenever I needed it.”
– Ekhlas Al-Ghamri

Ekhlas Al-Ghamri, 21, is pregnant with her second child. She lives in Abu Al-Ajeen, eastern Deir al-Balah, one of the most war-battered and marginalized communities in Gaza. She attends a crowded free clinic run by a Caritas mobile team which visits the area twice a month. Her husband is a farmer labourer. Heearns less than $50 a week.

Caritas provides her with ante-natal care including vitamins, regular checks on her blood pressure and weight as well as ultrasound monitoring.

“They were very kind, and helpful, they never hesitated to give support whenever I needed it,” Ekhlas said. Before the arrival of the Caritas, residents say, the area suffered greatly from a lack of medical services.

Ekhlas wants Caritas to increase the number of its visits to her area. ‘They’re not enough” she said.

Due to limited resources and funds, her medical teams can go only twice a month to each area. The project has been running since January 2018. It has funds only to continue until the end of March this year. More funds are needed to continue this essential service in some of the poorest parts of the Gaza Strip.

Married and the mother of four children, Noor sympathizes with mothers attending Caritas clinics. Her ability to support her own children when they need medical care is what drives her to support vulnerable children in remote areas.

“We do everything that we can to see them smile again,” Noor says.

Noor refuses to leave her hometown Gaza, despite the hardship and deteriorating security.

“If people like me left Gaza, who would stay to help these people and rebuild this place again?”
– Noor Tarazi 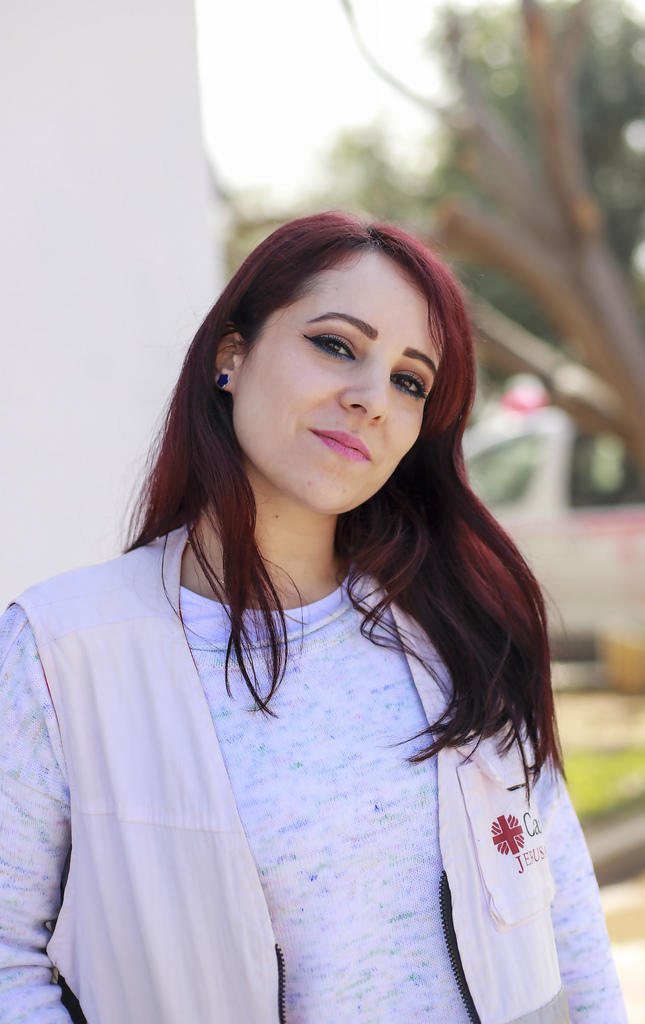 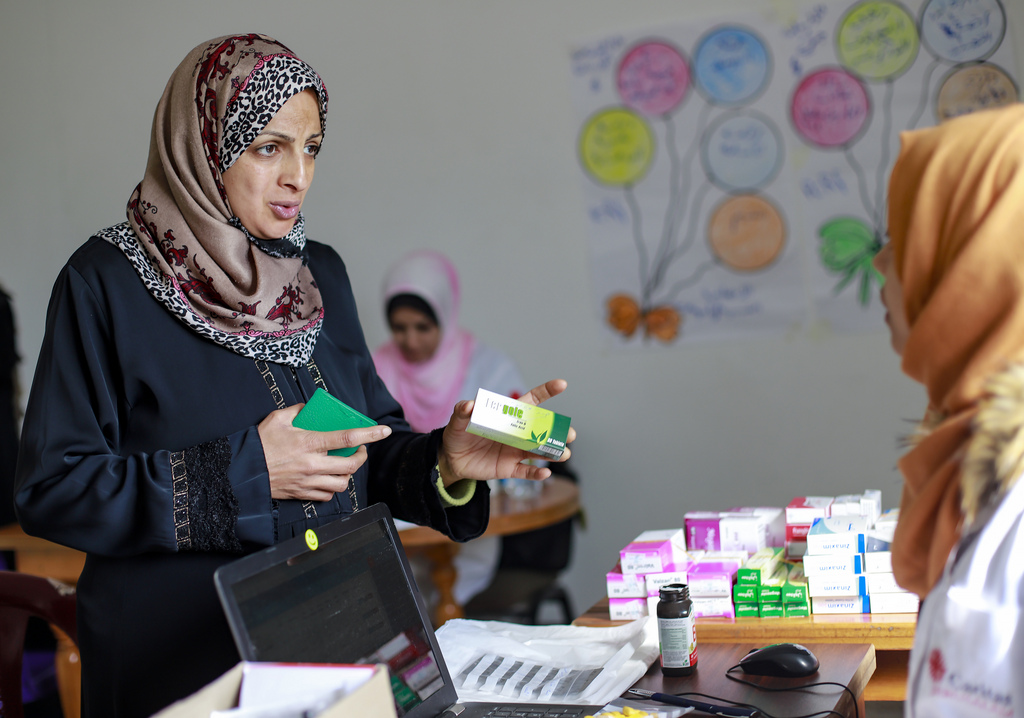 “The need for primary health care in the marginalized areas has increased due to the continuous clashes on the borders.They have resulted in wounded patients needing health care and follow up,” says Ameen Sabbagh, Caritas Administrator in Gaza. “The withdrawal of USAID has compounded the needs.”

“The crowded areas of our intervention lack any kind of infrastructure, sewage system, clean water, electricity and for sure the absence of any kind of heating system in the houses during winter time,” says Ameen. “The political situation is still the same. Lmitations are imposed on incoming basic goods, medical supplies and medications.”

Caritas’ expanded project is targeting thirteen marginalized areas, with a total population of around 220,000. Three of those areas have been added to the Caritas programme in response to the USAID withdrawal.

Sister Bridget Tighe, General Director of  Caritas Jerusalem had lived in Gaza for three years. She underlined the human tragedy of the “11-year blockade that keeps more than two million people imprisoned.” 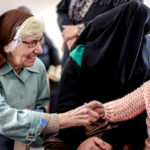 “These facts are well known. So well known that over the years the conscience of the world has become accustomed to them and immune to the horrors of one people occupying and dispossessing another for more than 50 years,”

How you can help with this health crisis in Gaza

Caritas is working in Gaza helping people overcome the hardship and obstacles resulting from the blockade and years of conflict.

DONATE TO OUR GAZA APPEAL

5/03/2019 Conflicts and Disasters, Emergencies, Emergencies in the Palestine, Jerusalem, Middle East & North Africa by Caritas Internationalis
Prev
Next
This website uses cookies to improve your experience. We'll assume you're ok with this, but you can opt-out if you wish.Accept Read More
Privacy & Cookies Policy
Necessary Always Enabled