Christe Bayo has endured the worst of the forgotten conflict in Central African Republic. His mother and brothers have been killed, he was tortured almost to death and now he survives on the charity of friends.

Central African Republic, one of the world’s poorest countries, has been riven by violence since 2013 when mainly Muslim Seleka rebels launched an uprising, prompting reprisals from mostly Christian militia. Militia groups on both sides of the religious divide control some 80 percent of the country, often fighting over the country’s resources of gold, diamonds and uranium.

The violence suffered by Christe’s family is emblematic of the plight of many in a country that has been largely abandoned by the international community. 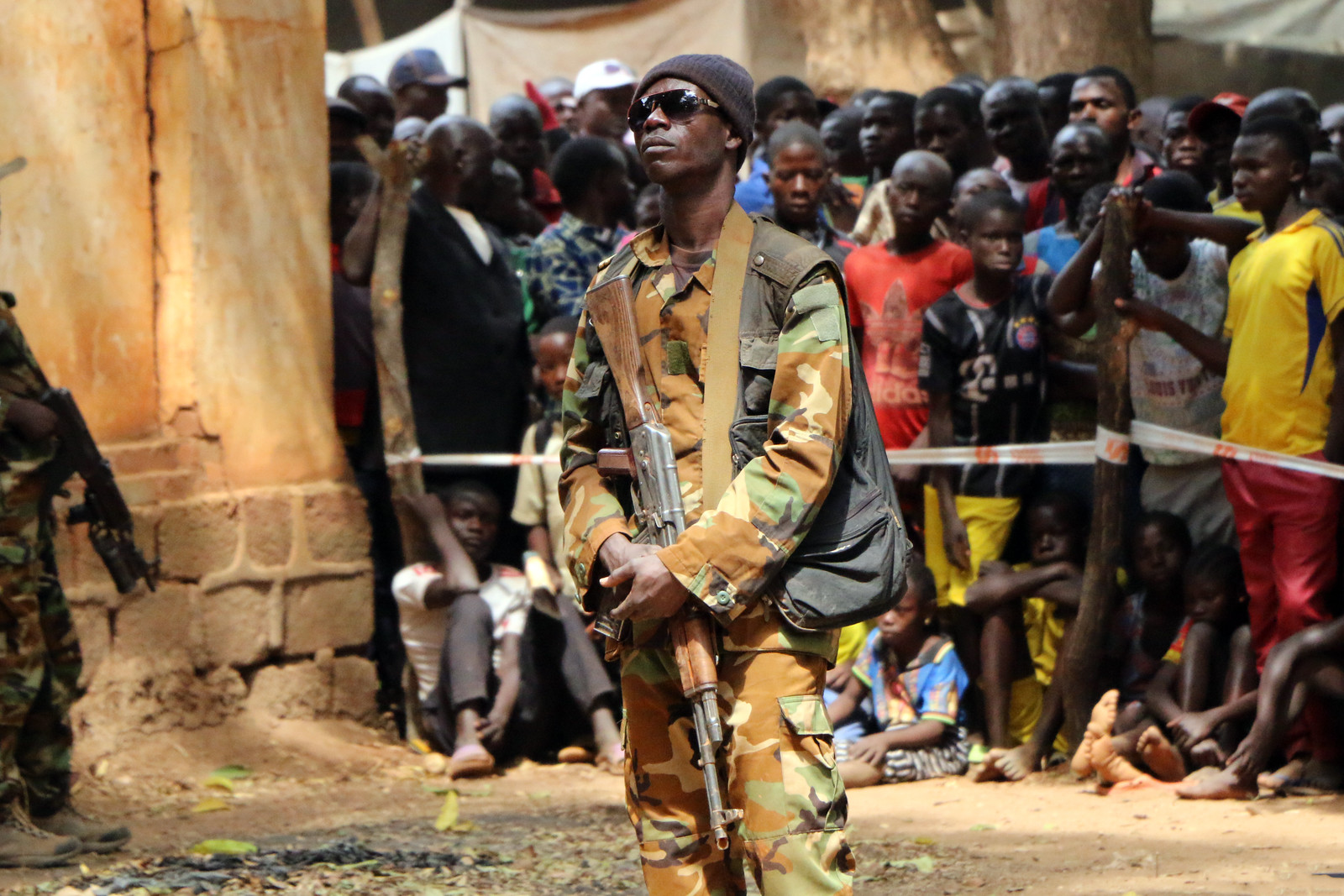 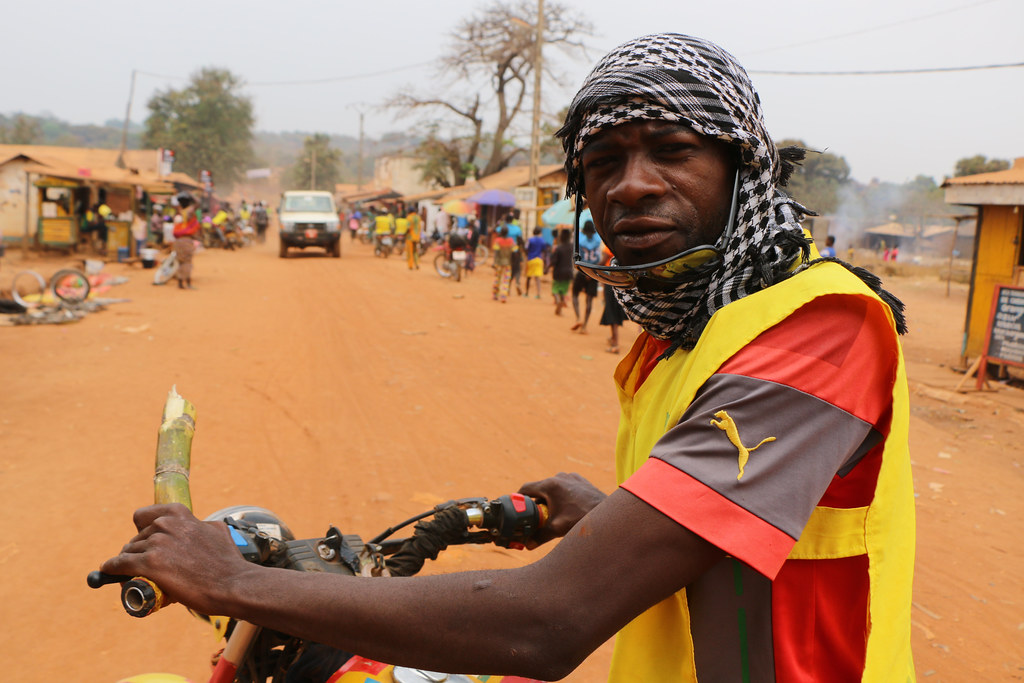 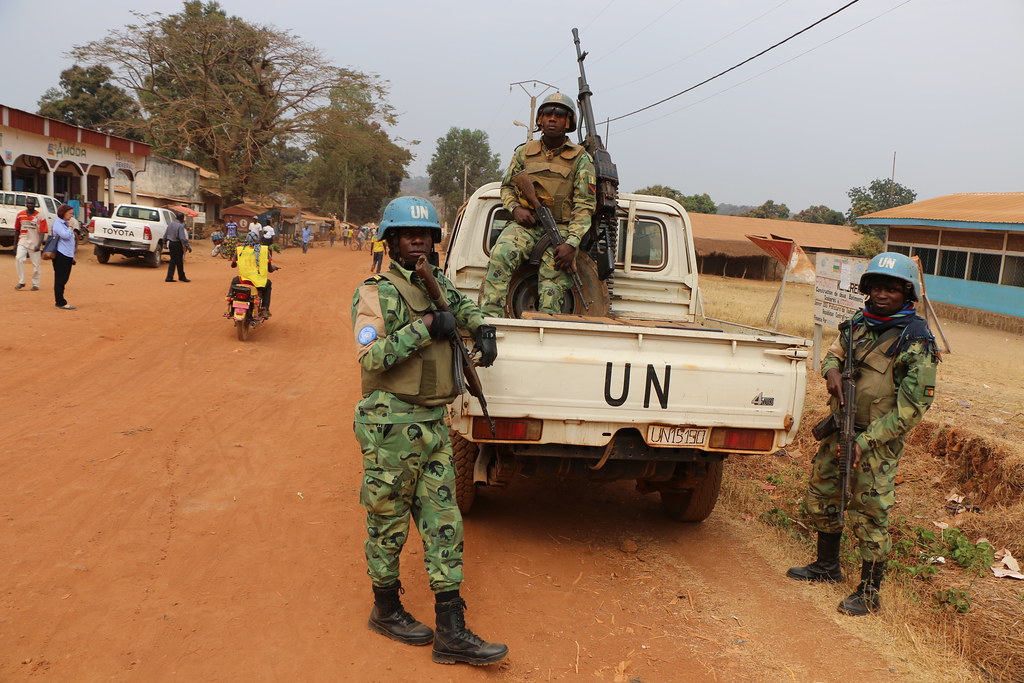 His mother, a nurse, was working in Bambari when a Seleka commander arrived at the hospital with his pregnant wife and warned her that if his spouse died, he would kill her. During childbirth, the commander’s wife died and so he returned and murdered Christe’s mother.

Christe was working in the capital, Bangui, and due to the conflict and the country’s poor communications, he learned of her death four months later.

On his way to visit her grave, Christian Anti-Balaka militiamen detained him and accused him of being a Muslim. They didn’t believe his protestations that he was a Christian and tortured him in an attempt to make him confess to being a Muslim. They beat him with barbed staves and a car exhaust pipe and used pliers to rip off skin. Only the intervention of the local mayor saved his life. The Red Cross tended to his wounds and oversaw his month-long recuperation.

Caritas helps over 50,000 people in Central African Republic with food, medicine, education, hygiene kits and agriculture. We have been at the vanguard of peacebuilding initiatives in the country.

Thousands of people have died in the conflict and a fifth of the country’s 4.5 million population have fled their homes, including 620,000 internally displaced people (IDPs) and 570,000 refugees in neighbouring countries.

A 12,000-strong United Nations (UN) peacekeeping mission, MINUSCA, one of the organisation’s biggest operations, has struggled to restore order to the countryside where the government has little or no control and attacks on civilians are frequent.

The violence in Central African Republic has pushed the country towards famine with 63 percent of the population needing emergency aid, the UN said last year.

20% OF POPULATION HAS FLED THEIR HOMES
620,000INTERNALLY DISPLACED PEOPLE
570,000REFUGEES IN NEIGHBOURING COUNTRIES

“In this conflict, religion is abused for political ends,” says Cardinal Dieudonné Nzapalainga, Archbishop of Bangui and president of Caritas CAR.

“Religion has been exploited for war business in which rebels illegally exploit blood diamonds.”

Caritas is working at the heart of humanitarian and peacebuilding initiatives in Central African Republic. Even though violence intensified in 2017, forcing humanitarian organisations to withdraw from camps housing displaced people in Kaga Bandoro, Alindao and Bangassou, Caritas has maintained its operations throughout the country.

“At the start of the crisis, the first day that there was the coup, it was Caritas who went out on the streets to give medicine, to give food,” says Cardinal Nzapalainga.

“There was nothing to eat, so it was Caritas who emptied its reserves to go to meet them. Caritas works so that calm, harmony and agreement returns”.

With a long presence in rural parts of the country, Caritas has used its knowledge and local relationships to manage camps, setting up committees to gauge people’s needs, particularly those of the most vulnerable groups, to coordinate humanitarian relief, and to petition successfully for improved security in the camps.

It has led humanitarian efforts, directly bringing aid to over 50,000 people in the form of help with food, medicine, education, hygiene kits and agriculture. Caritas has also been at the vanguard of peacebuilding initiatives, such as organizing farmers’ markets where Muslims and Christians unite to buy and sell produce.

“We go beyond religious considerations, sensitivities, ethnic groups, regions…And that is the vocation of Caritas, to witness to the universality of the heart of God.”

Caritas’s work among 20,000 displaced people in a camp next to the MINUSCA base in the strategic Seleka-controlled area of Kaga Bandoro underscores the scale of the humanitarian disaster.

One of its inhabitants, Bertin Aguida, arrived at the camp with his wife and their seven children four years ago. “I fled a village located 30 km from Kaga Bandoro,” he says. “Seleka took my house and burned it down. We cannot go home.”

At first, he built a cabin in another camp but the land owner moved them on. “So we moved to a nearby place that Caritas set up for us,” he says. “Now I work as a caretaker at MINUSCA, so we have a small income.” Caritas has also arranged for him to be able to raise crops. 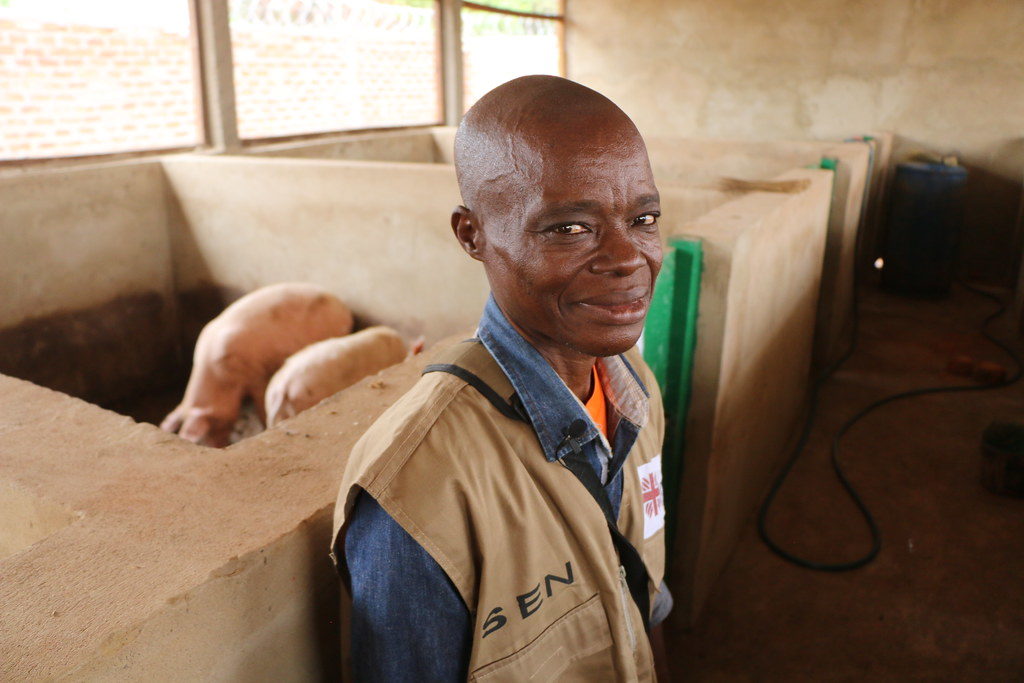 Caritas program hopes to provide local meat for local people at affordable prices. “By raising the numbers of animals, we will help to reduce the current enormous prices,”says Arthur Yabeta, agricultural technician.

“Caritas has negotiated the temporary use of agricultural land in the immediate vicinity of the MINUSCA site,” explains Sangze Nicolas, a Caritas agronomist technician. “It’s not just a source of income for IDPs (Internally Displaced Persons). This project also gives them activities, something to do. The way to spend the day.”

But there isn’t enough land for everyone to grow vegetables. “Caritas chooses the most vulnerable to become the beneficiaries of this project. For example, a widow who is the mother of three,” says Sangze.

And some people are even less fortunate than Bertin. “Seleka attacked our village,” says Jeannet Laguerre. “They stole everything and beat us. That’s why we fled here. Life is very difficult here. We sleep on the ground, we have nothing to eat, insects attack us.”

Many struggle daily to find food. “Sometimes we have nothing, sometimes a bit of flour with salt,” says Lidy Yakoda, a mother of five children. “It’s not possible to go far in to the bush to look for something to eat. It’s dangerous because there are always attacks and looting, so we have to stay here. ” 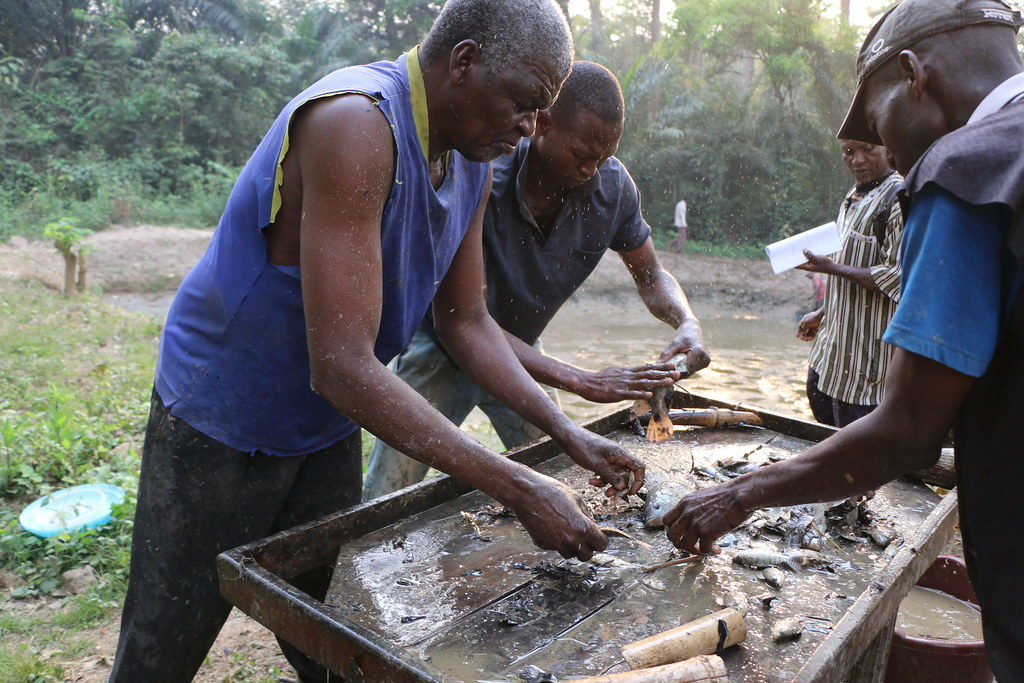 Animals, such as fish, produced locally will be cheaper and will help people to intake important proteins. This fishery was abandoned for the last 18 years, but with help of Caritas and partners was reopened in march 2018.

Kaga Bandoro is particularly dangerous for women, with frequent reports of women being attacked and raped. “In relation to the security situation, women are completely stuck here,” says Nour Adamou. “They do not even have the opportunity to do their job, to fulfill their duties. The state has no control or authority here.”

Waiting all day and not having the ability to change their lives is frustrating for people in the camps. “We did not want to come and live here, the rebels forced us to do it,” said Helene Kiringuinza. “We have a big house that we want to go back to as here we cannot do anything and we depend on food aid. The chaos is terrible and we wish to return home.”

Caritas is also working to help Muslims in the neighborhood of Ganama, on the other side of Kanga Bandoro. “Right now Caritas started helping us,” says Adamou, who gives only one name. “Caritas distributes coupons for food. Caritas is like our family who loves you and will help you.”

Father Aurelio Gazzera, a Caritas diocesan director in Bozoum, shares his disquiet, emphasising that the Central African Republic is still in crisis and in great need of help.

“It is still a country out of the spotlight, a country little known,” he says. “It is a country in which there are huge needs and it really needs to work in the long term on development, education, health, agriculture.” 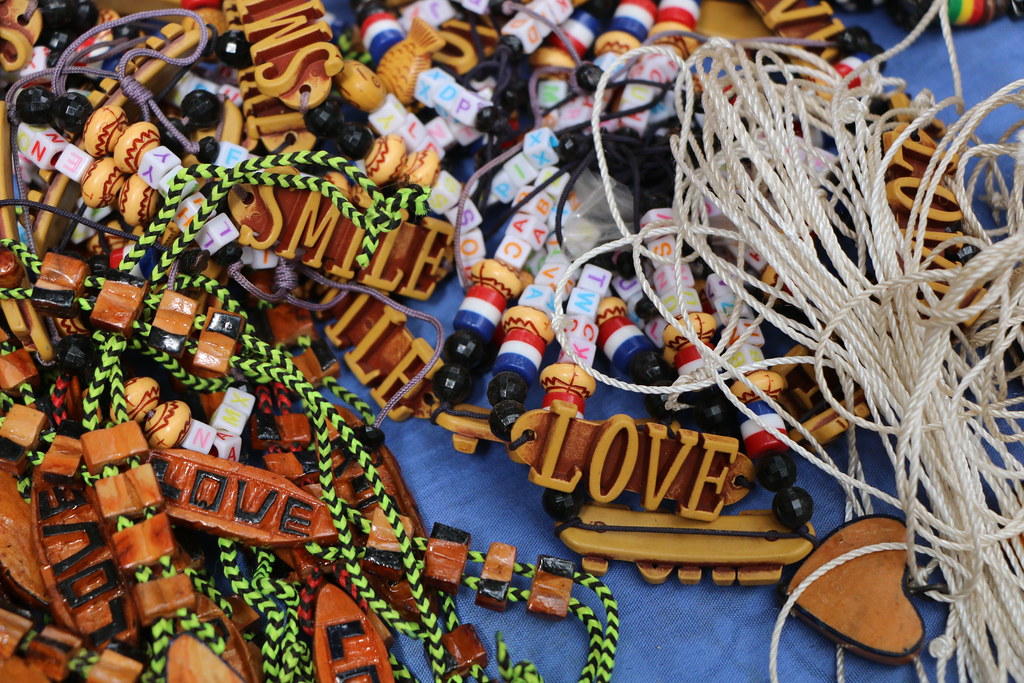 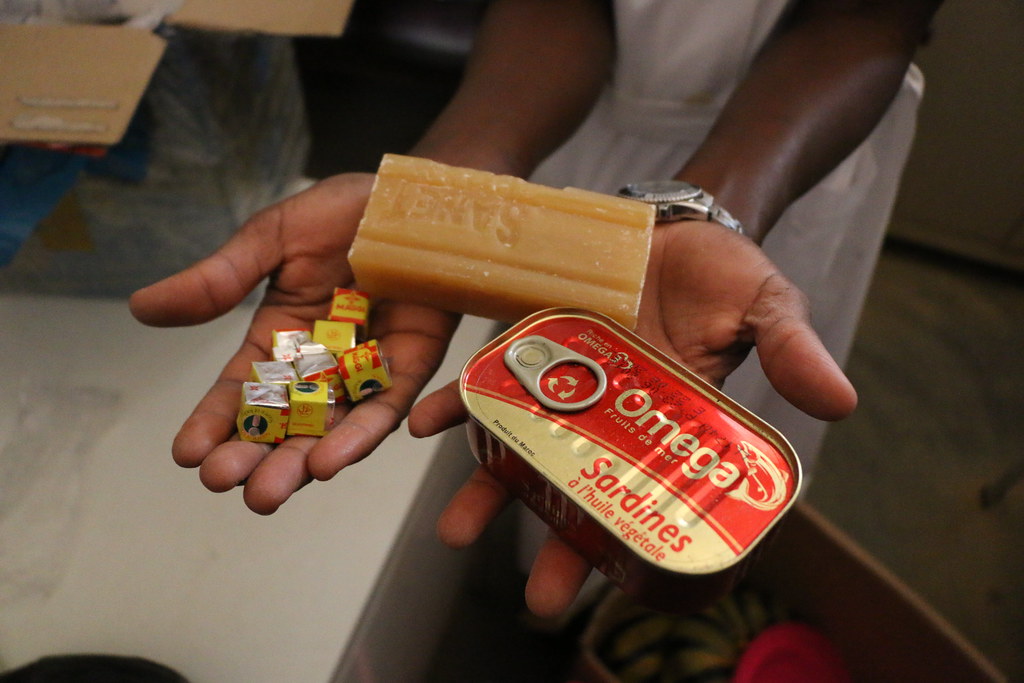 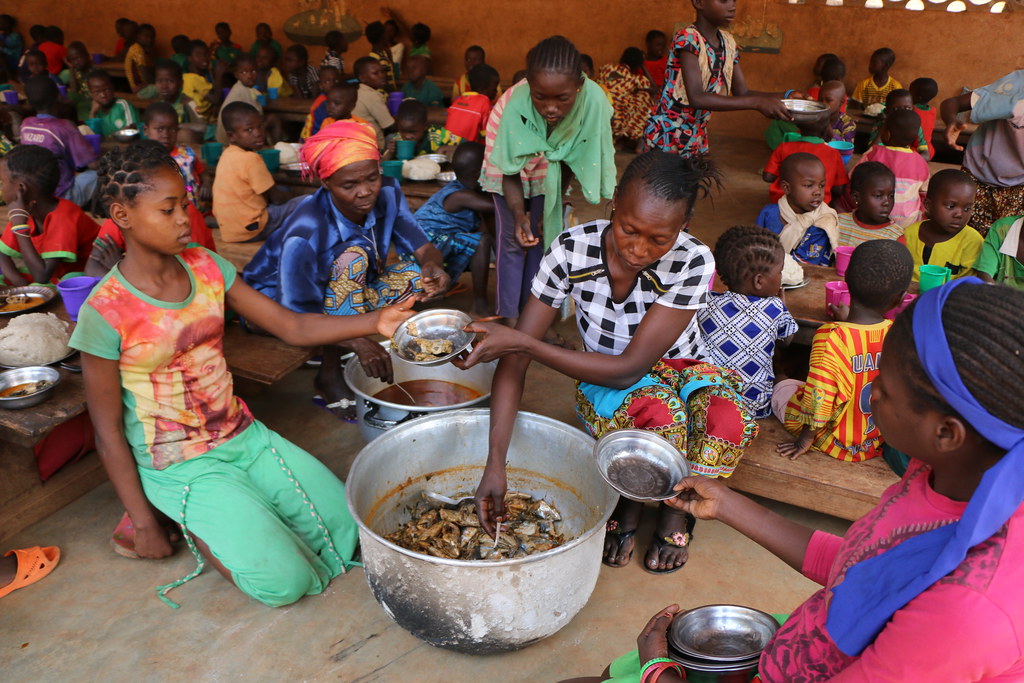 Czech NGO SIRIRI works with Fr Aurelio in Bozoum to deliver the ‘Learning Through Play’ educational programme. It’s designed to improve the quality of education through a primary school syllabus in Sango, the local language. Literacy rates for children in the programme have gone up from 20% to 80%.

“Today’s first-graders will grow up and be taught to read, write and count, to seek the meaning of the text, not to be afraid to ask questions, to ask “why” and to learn to think critically, it all will bring its fruit in that land,” said Ludmila Böhmová, founder of SIRIRI.

Fr Aurelio says that there is a great desire for peace among ordinary people. This is confirmed in the case of Christe, who does not want revenge for the death of his mother or brothers.

“I want the crisis to come to an end,” says Christie. “I want peace to return and Christians and Muslims to live together, working together.”