Caritas workers are at the forefront helping emergency relief efforts in Pakistan where monsoon flooding has caused 221 deaths and driven thousands of people from their homes.

The annual monsoon season, which began in July, brought torrential rain and urban flooding across the South Asian country. 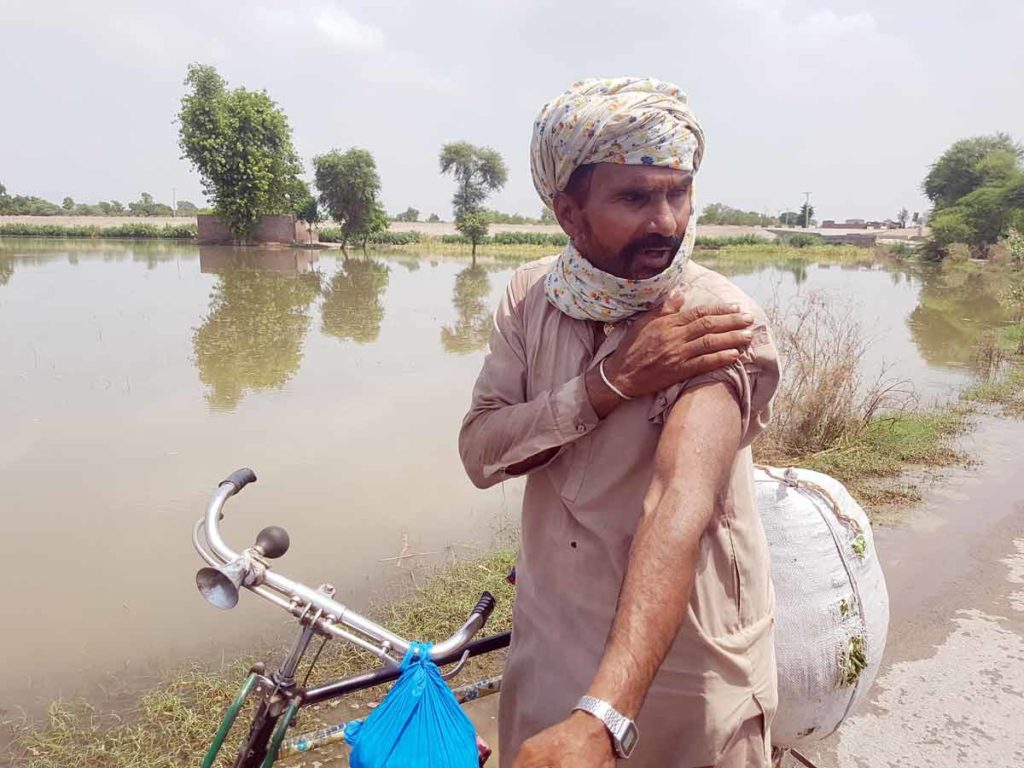 In Karachi, a sprawling port-city of 20 million people, one of the worst hit areas, Francis Javed, a 52-year-old Caritas volunteer, helped rescue more than two dozen families from flooding.

The father of six, who works as a cobbler, said he received a phone call from Caritas Pakistan Karachi, warning him about an overflowing dam not far away.

“I shifted my family to a relative’s house, alerted the community members and made announcements in the local mosque requesting people to evacuate or climb on to their rooftops,” he said.

Javed’s announcement helped people prepare for the flood waters, which reached his district about three hours later. When the army arrived, Javed helped them rescue people trapped in their homes over the next five hours.

“We had four boats, but each could only transport up to 12 people. The strong water currents made it difficult to evacuate them,” he said. “We used bamboo sticks for support and scanned the surroundings for obstacles in the flooded areas.”

Javed began to volunteer with Caritas more than a decade ago, when he received aid from the church after his home was destroyed in floods in 2008. He heads a local Disaster Management Committee to plan for potential disasters. The group prepares food, shows people how to safely store documents and discusses escape routes. 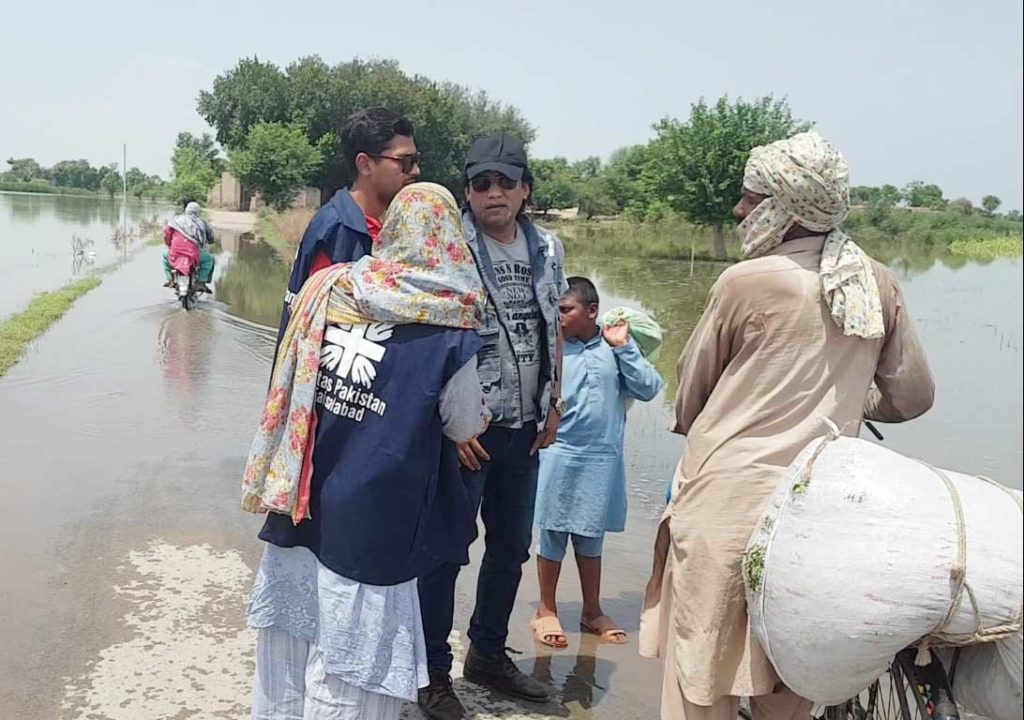 After this year’s floods, Caritas Pakistan Karachi also distributed plastic sheets to affected households as people were sleeping without shelter and gave cooked food to those in need, working with the help of local foundations and philanthropists.

Across Pakistan, Caritas workers waded into rescue people from the floods.They also distributed relief aid among flood-affected families, including food packages, tents, plastic sheets and mosquito nets. The mosquito nets are critical as following the heavy rains and flooding a dengue epidemic has broken out in several cities.

In some areas, the disaster has been further complicated by the release of sewage from cities into rural areas, for example, in Jhang district where farmers say livestock has died as a result.

Muhammad Tariq lost his cow a few days after feeding it with fodder from the flood-swamped fields of Noor Shah Village in Jhang District.

“I always fed her green fodder from our village,” said the 46-year-old farmer. “My cow was quiet and healthy until water from the nearby Chenab River entered our farms last month.”

Unable to purchase fresh fodder from the market, Tariq fetched it from farms submerged by flood water. His cow died a few days before Eid al-Adha, the Muslim feast of sacrifice. “I couldn’t conduct the religious obligation and suffered a great loss,” he lamented. 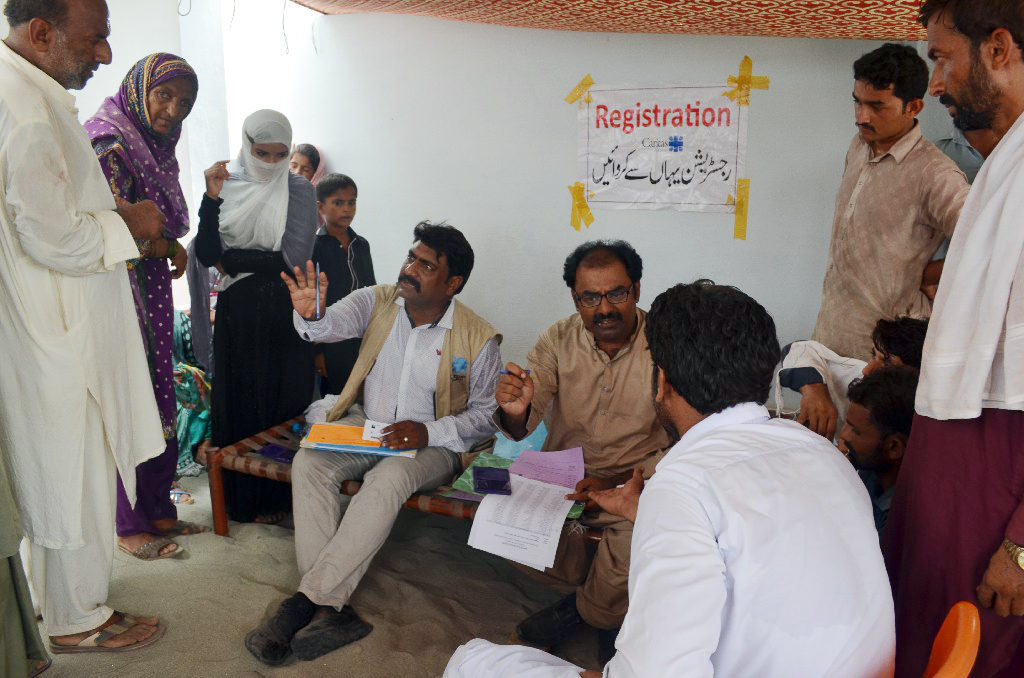 Now locals must purchase fodder for their livestock in Jhang city, about 10 kilometres from Noor Shah Village. “The fodder costs 200 rupees per 80 kilograms. We used to get it for free from local farms,” said the father of two.

Travelling to Jhang city is another challenge. The locals of Noor Shah Village and adjoining areas have to wade through knee-deep water to reach the nearby road. Tariq has developed rashes and abscesses on his legs from cycling through the dirty water.

The floods destroyed also much of his farm. “All the crops of our village including rice and ladyfinger have died. My father only taught me farming as a way of livelihood. I don’t know how to survive,” he said,

Staff from Caritas visited his village, but could not reach all those affected due to the appalling conditions. “It was hard to breath; the river water has mixed with human waste,” said Aneel Mushtaq, a Caritas official. “We could not visit the affected families as the village is cut off. They desperately need fodder, medicines and rations.”