Caritas workers are providing aid to some of the 176,400 people who have fled fighting following Turkey’s military incursion to clear Kurdish militia from northern Syria. The displaced, including 74,000 children, were forced from their homes by violence at the start of the military operation in early October.

US President Donald Trump’s decision to withhold protection from Syria’s Kurds and withdraw American troops from the area led to the Turkish offensive. The assault prompted Syrian President Bashar al-Assad, backed by Russian and Iranian allies, to deploy forces to the same region.

The moves have provoked a new humanitarian crisis in Syria, where the United Nations estimates that of the country’s 22 million population, 13.1 million are dependent on aid inside the country, with 5.6 million in acute need.

The UN says that before October’s violence in the north, Syria was already home to 6.1 million internally displaced people. The war, now in its eighth year, is one of the world’s worst ever humanitarian catastrophes. Most international experts estimate over 500,000 people have died in the violence. 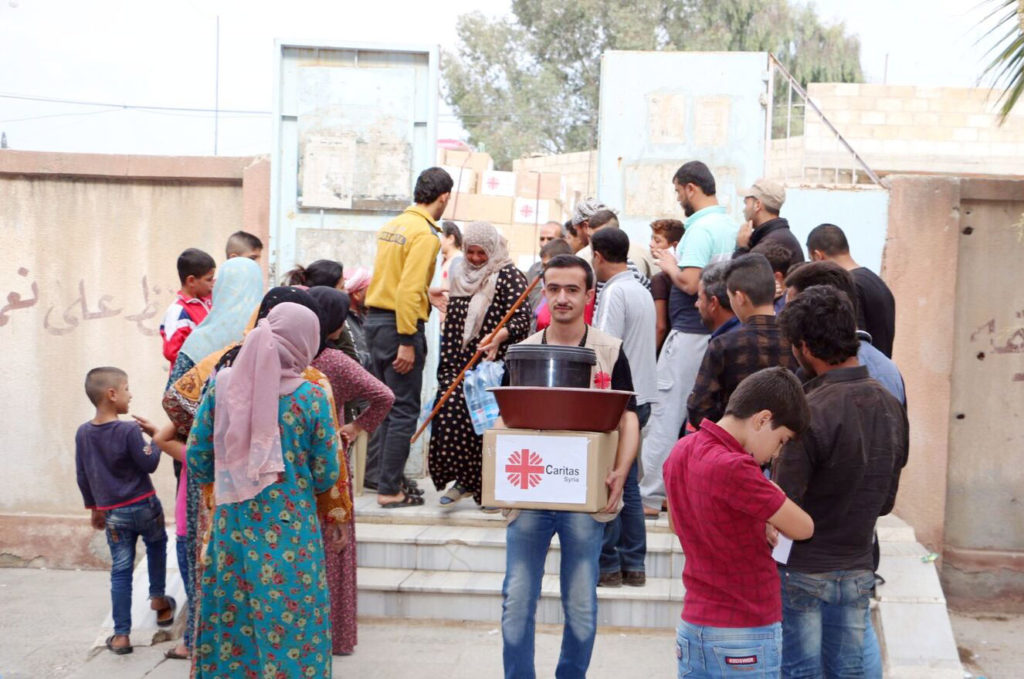 Despite travel restriction, Caritas is in Al-Hasakah giving aid to displaced families in shelters. Photo by Caritas Hasakah

Caritas workers have observed that many of those affected by the violence following the Turkish incursion have been displaced multiple times from one area to another. More than 3,000 individuals have reportedly fled to Iraq.

Turkey and the USA agreed to a cease-fire, with Kurdish forces expected to withdraw from the “safe zone”, approximately 32 kilometres deep stretching across northern Syria, and the security situation is relatively calm.

Following the ceasefire, officials of the Syrian Democratic Forces (SDF), which is led by a Kurdish militia, announced a full withdrawal from Ras al-Ayn, a town on the border with Turkey in northern Al-Hasakah governorate.

However, clashes, airstrikes and attacks have continued elsewhere. Caritas workers expect that if military operations restart, with deployments and advances near Tal Tamer, further displacements are likely occur.  The team believes many will head to Al-Hasakah city, where its relief work in the north is focused.

Overall, 55 collective shelters in Al-Hasakah governorate are accommodating 10,768 people (2,224 families). Currently, the security situation does not allow anyone to travel to the area, but Caritas is providing aid to 200 families, about 1,000 people, seeking refuge in five shelters in the city.

Shortage of water in Al-Hasakah 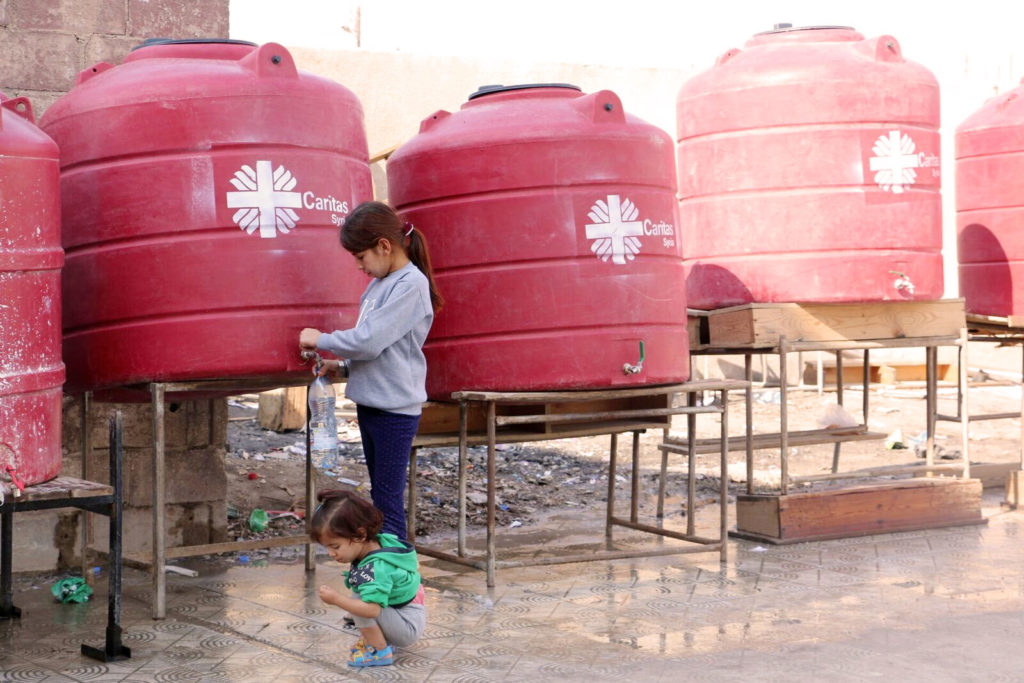 The city of Al-Hasakah is suffering from limited access to water and newly opened shelters have been in need for water tanks to be filled. Caritas distributed water tanks and is supplying water to make up the shortfall.

Samar, a worker for Caritas Syria in Al-Hasakah, describes appalling conditions in the shelters. “They are an inhabitable places,” he says. “They lack necessities, from bathrooms to sponge mattresses, as well as drinking water and meals.”

Caritas has pledged to provide drinking water, with a per capita share of 3 litres per day, in addition to providing four water tanks for each shelter. “The reason behind providing drinking water was the commitment of other organizations to provide meals and other supplies,” he says.

Samar explains that one of the most poignant moments his team has experienced during the distribution was when a group of children in the shelter asked repeatedly for food.

“They said, ‘We are very hungry and need to eat some food because since yesterday we have not eaten anything yet!’”.

Although families residing in the city’s shelters are currently supposed to be being served hot meals provided by kitchens set up by local partners, Samar said food distribution remained patchy and uneven. Tsoleir Kasparian, a Caritas worker from Al-Hasakah, added:

“The most disturbing thing to me was the look of hungry children at the shelter.”

Also, poor hygienic conditions prevail in some shelters. Caritas is giving each family a hygiene basket with basic items to cover their hygiene needs for 15 days. Tsoleir says: “We have provided hygiene kits for 200 displaced families that included the following items: bucket, bowl, mop, tissue box, soaps, washing powder, shampoos for both women and children, sanitary pads, toothbrushes and toothpastes.” 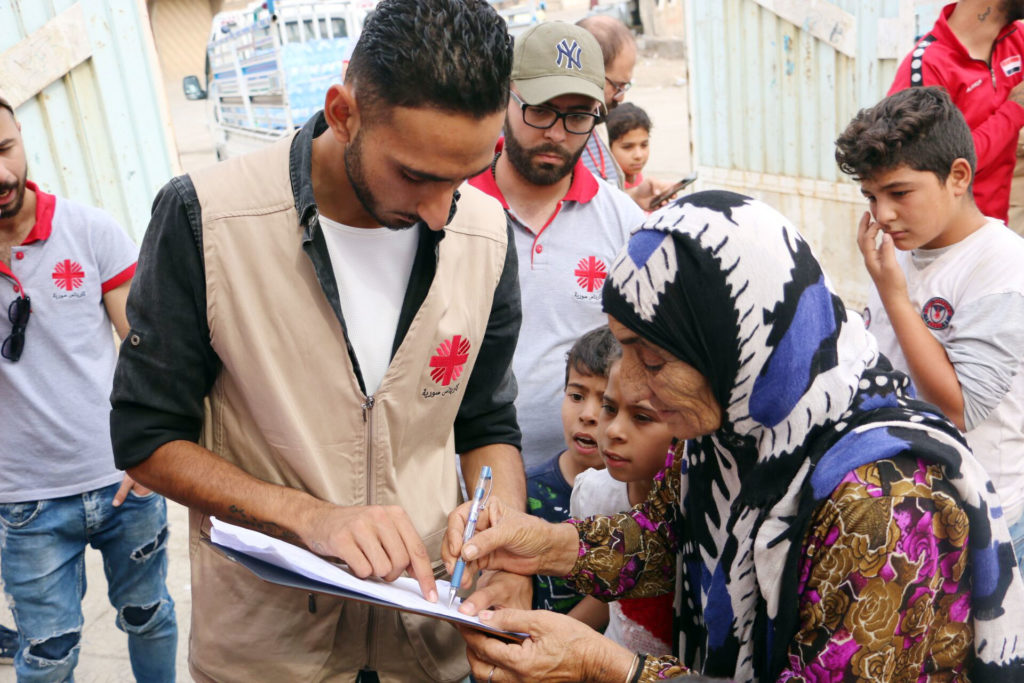 Families have lost everything

She points out that many of the families are missing members. “A significant percentage of families consist of women and children only, as their men are absent,” she says. “Some of these men are killed, others stayed back home.”

She adds that children make up about half of the numbers of these displaced people, including a percentage of pregnant women, with some of them have given birth in the shelters.

Tsoleir says that people are reluctant to give their names or have their photograph taken. “That is because some of these families had a good financial situation before the military operation, but now it has wrecked their lives for good, they have lost their homes and all of their belongings, they have lost everything,” she adds.

The destruction of people’s lives was underscored by one girl,  in the ninth grade, who asked “whether we could offer her books to study from, as she is losing time staying away from her school,” says Tsoleir.

More needs over the coming weeks 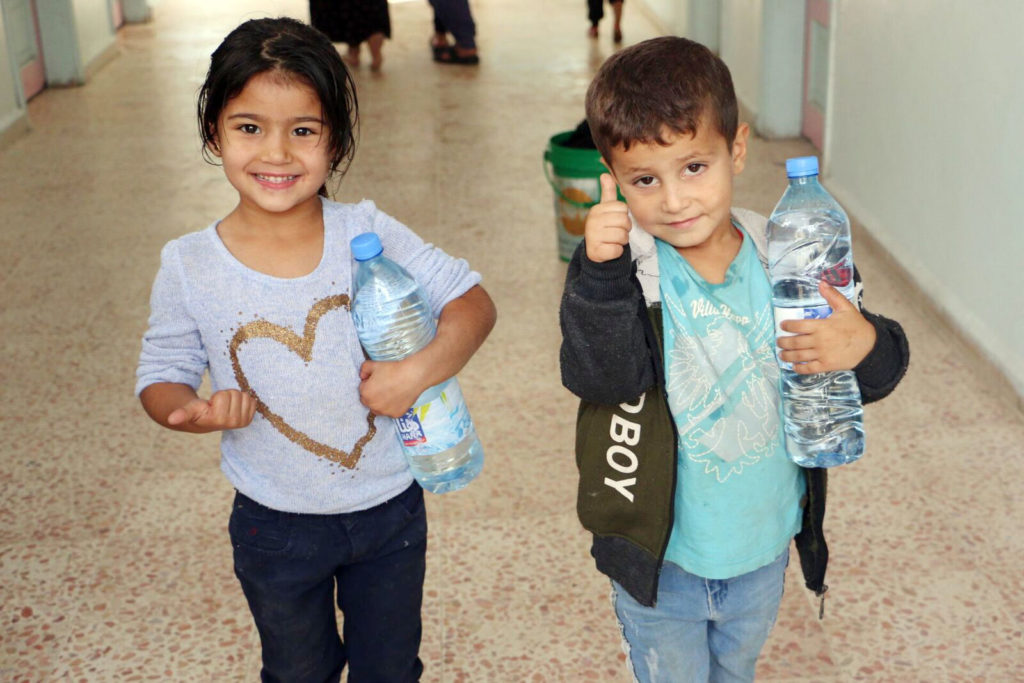 More needs in the coming winter months for displaced families in Al-Hasakah. Photo by Caritas Hasakah

Samar points out that another challenge is poor security. “When we were at a shelter late at night, there was gunfire in the neighborhoods adjacent to the shelter and for a moment, we felt the same fear and insecurity as the people at the centre,” he said.

Markets and shops are still functioning normally, with basic items such as food and hygiene items still available, but Caritas expects that prices for basic items will rise during the coming days. Also, with winter approaching, Caritas is planning to distribute mattresses, winter clothes and kitchen items to the five shelters.

“In Al-Hasakah Caritas is tirelessly continuing to serve residents in the five shelters we are looking after,” said Caritas Hasakah director, Edmone Mallous.

“We expect that their needs will increase over the coming weeks and we want to be there to help alleviate the latest painful episode in Syria’s tragic war”.

How you can help displaced families in Al-Hasakah

With your support we can help displaced families in Al-Hasakah prepare for the winter months. Please donate today.