As together we start the period of Advent, I remember vividly where I was this time last year.

I was in Bangladesh, sharing community with refugees from neighbouring Myanmar. At the time, I explained that I was there to listen to people of the Rohingya ethnic group who had been forced from their homes with extreme terror and violence. I explained that if we listen to them, and listen to refugees and migrants elsewhere, we will see that their stories are our stories. Their sufferings and dreams are ours as well. We have a common path. We can share their journey.

Advent is a very special time. A time of great love and celebration, remembering our neighbours and growing in togetherness. Advent is also a time of waiting. Of waiting for the future, like the refugees I spent last Advent with, and also of waiting for the coming of Jesus, who himself became a refugee. Jesus was born poor, like these refugees, but he never stops loving. I hope none of us ever stops loving.

This Advent is the third when Caritas supporters have been working hard to advocate on behalf of migrants and refugees as part of the Share the Journey Campaign. This Advent, I am again reminding myself of the things the Holy Family shared with people on the move today. Some of them were told to leave their homes, others came up against the lack of room at the inn, of safety and security. Others have a baby born far away from home and family.

Caritas works with poor and marginalised people around the world. Please help us by making a donation today.

In its four weeks, Advent is also time of great creativity, when God, the Creator, sent his son amongst us to foster unity and love. Advent is a time of Masses, of wreaths of beautiful hues. It is a season bursting with colour and creativity, and with hope for the coming of Jesus.

Not long before Advent, Caritas held its Global Week of Action for the Share the Journey campaign, with its own theme of creativity, of using artistic expression to support Pope Francis’ vision of creative inclusion for migrants, refugees and host communities.

As Caritas, we found inspiration for our campaign in a young woman called Nasrin, who works for Caritas Bangladesh welcoming refugee children and keeping them safe. Through her work and love, Nasrin is a modern day witness of the qualities of Jesus’ mother, Mary. These are qualities of love, joy, patience, humility and kindness. Like many people around the world who support migrants and refugees, Nasrin humbly walks with the Holy Families of today. Share the Journey calls people to live out their faith and to testify to the values of the Gospel by walking with the most vulnerable. 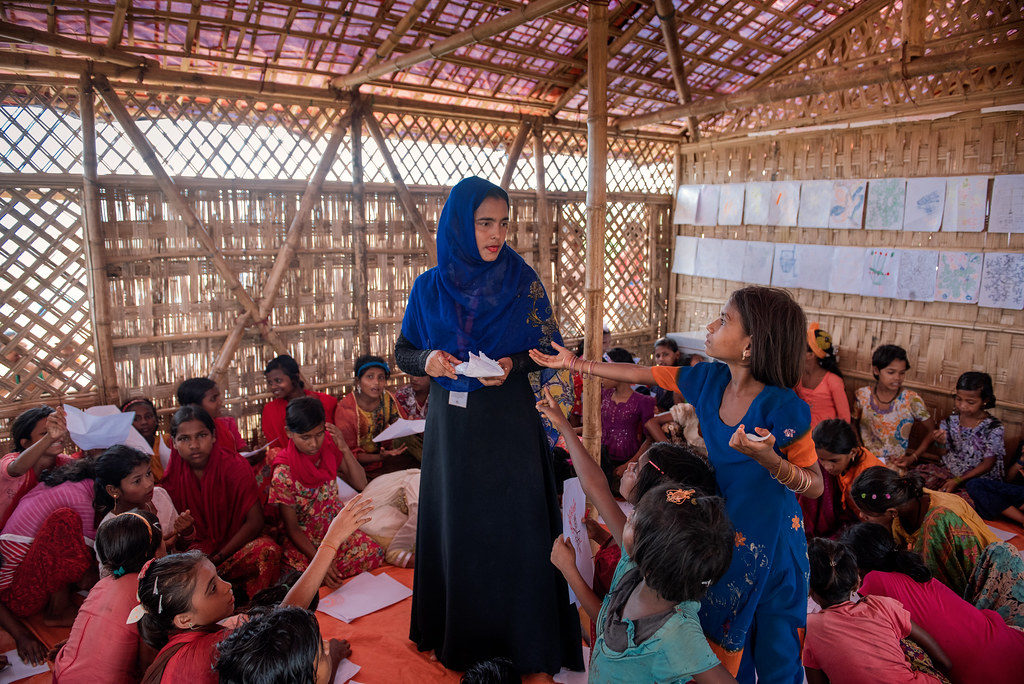 Nasrin works in one of Caritas’s six Child Friendly Spaces in Cox’s Bazar, which offers a safe, centralized and creative place where children can play and learn safely. Photo by Ismail Ferdous/CRS

Earlier this year in Rome I joined together with Caritas colleagues from all over the world as we pasted pictures of faces onto a giant collage to create an image of Nasrin’s face, wrapped in the blue head covering she wears to work in the refugee camps. I glued in a picture of my grandfather, who was sent to the Philippines as a child to escape poverty in China. Pope Francis stuck in a photograph of his Italian-heritage parents at their wedding in his birthplace of Argentina. Our migrant ancestors joined hundreds of people, some rich, some poor, some famous, some not, some migrants or refugees, others hosts, on the collage.

Caritas colleagues from Oceania brought with them an image of Behrooz Boochani, an Iranian-Kurdish writer, film-maker and human rights defender who was then enduring years of indefinite detention after being picked up by the Australian authorities as he tried to travel there as a refugee. Behrooz has just been released, but where can he now call home? His face was on the Caritas collage when it went to Aotearoa New Zealand’s parliament during Share the Journey’s Global Week of Action.

This collage of creativity inspires and soothes me, with its people literally stuck together with glue, becoming one, finding unity and love. It speaks to me of seeing the world as a whole rather than as an individual. If you move back from the collage, with the distance, the individual faces recede. Instead, there is just one face, a face representative of the human family, of us, the children of God, who are called to open ourselves to the creativity of God’s love, in togetherness, not separate from one another.

The Caritas collage reminds me of what Saint Pope John Paul II wrote in his Letter to artists. “The artist has a special relationship to beauty. In a very true sense, it can be said that beauty is the vocation bestowed on him by the Creator in the gift of artistic talent”.

It reminds me too of the words of Pope Francis.

“By his coming, Christ brought with him all newness. With this newness he is always able to renew our lives and our communities, and even if the Christian message has known periods of darkness and ecclesial weakness, it will never grow old. Jesus can also break through the dull categories with which we would enclose him and he constantly amazes us by his divine creativity.”

This Advent, let us remember the coming of Jesus, of his journey to us. Christ wants to share the journey with us, as he was shared with us by our creative God. 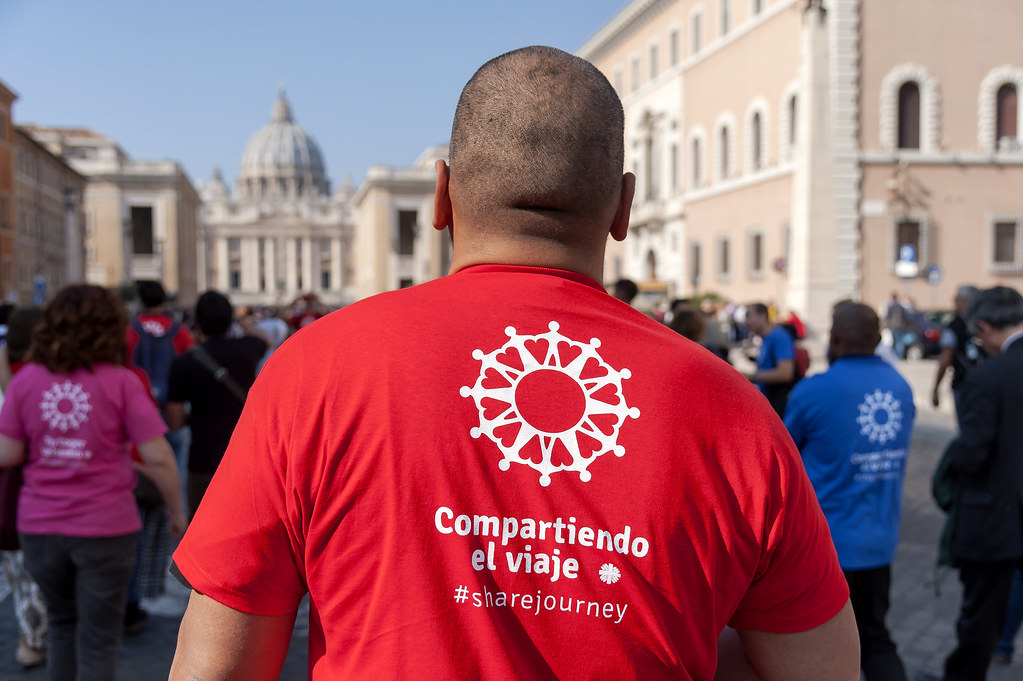 Caritas works with poor and marginalised people around the world. Please help us by making a donation today.