Our teams from Caritas Germany and Brazil explain how the Synod has come at a critical time for the Amazon.

“The environmental situation in the Amazon is dire and the very existence of its indigenous peoples is under threat,” says Manuel Brettschneider, a Brazil expert at Caritas Germany. “So the Synod has come at a critical moment in time.”

As Cardinal Michael Czerny, Undersecretary of the Vatican’s Dicastery for Promoting Integral Human Development powerfully declared at the close of the Synod: “When the world saw the Amazon burning, people realised we have to change.”

Manuel hopes the historic assembly will result in a Church that is strengthened to take on the political and environmental crisis in the Amazon.

“As many of the problems taking place in the Amazon are transnational,” he points out “the Church is in a strong position to use its extensive global network to respond.”

Staying poor in a rich country

Despite its relative wealth, Brazil suffers from extreme social inequality, poverty and ecological devastation. These issues come to the forefront in the Amazon biome. Here, Manuel explains, Caritas Germany together with Caritas Brazil work on three main concerns: indigenous rights, sexual violence against children and youth, and migration.

The focus on indigenous rights was central to the Synod. Rome has been transformed by the joyful presence of many indigenous peoples from the nine countries of the Amazon, raising their fundamental issues of dignity and survival. 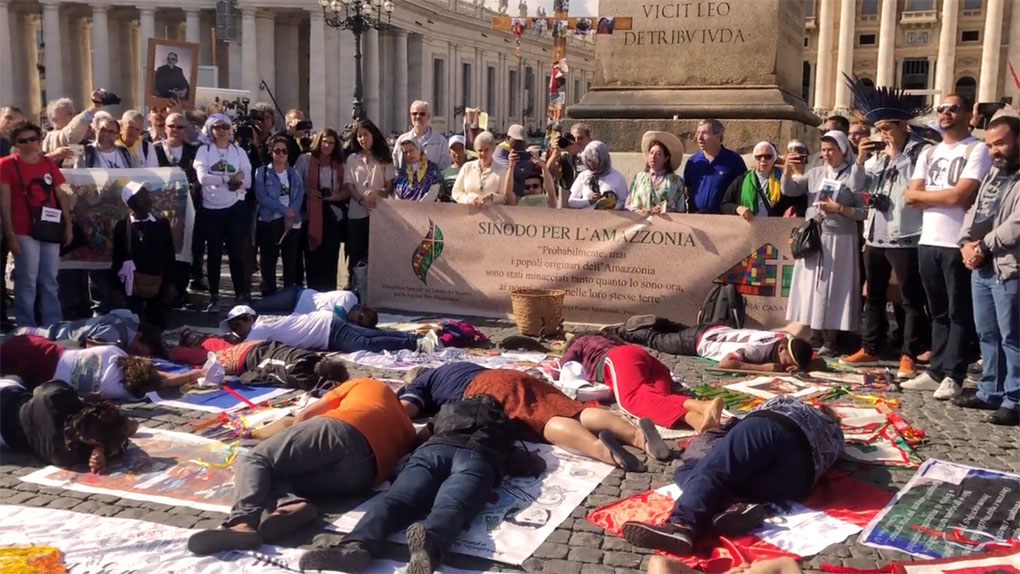 Indigenous peoples of the Amazon at the Synod of Bishops in Rome. Photo by Alejandra Pero/Caritas

Pope Francis described it as a “grace” to spend time “listening to the voices of the poor and reflecting on the precariousness of their lives, threatened by predatory models of development.”

Caritas supports many traditional groups in the face of such predatory interests across the Amazon.  Our local teams help train them to demand their rights not only to their territory but to a whole raft of issues affecting their lives.

“We train people how to lobby at the state, national and international level,” says Manuel, “and support them to earn a living in sustainable ways.” For such initiatives to work well, they need to be adapted to people’s different cultures, and to the natural environment around them. Most of all, they must enable people to stay on their own territories, so they are not forced to migrate.

As Bishop David Martìnez, Apostolic Vicar of Puerto Maldonado in Peru, pledged at the Synod: “The Church allies herself with the people of the Amazon region in defense of their land and of life.”

Protecting the most vulnerable 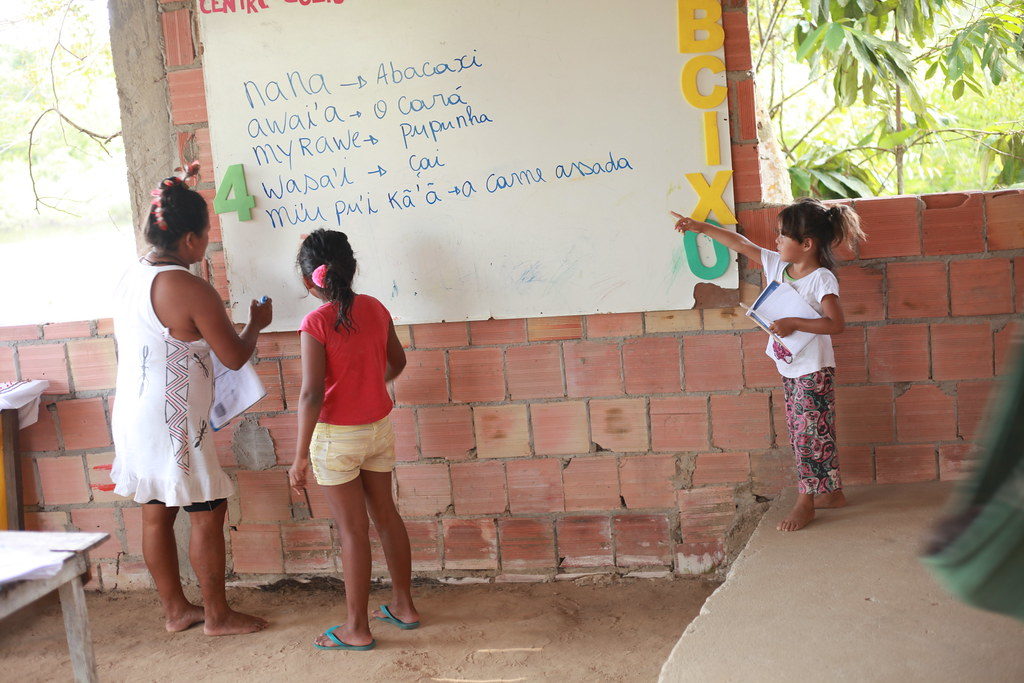 Dona Terezinha the Gaviao community in Brazil runs a small school for the children of the community. Photo by Marcella Haddad/Caritas

The Synod’s final document laments the situation of young people in the Amazon, who “have the same dreams and hopes as other young people across the world” but are faced with “sad realities such as poverty, violence, sexual exploitation… trafficking and new forms of slavery”.

The Church must “welcome and walk beside young people” the document declares, especially those on the margins. Caritas Brazil runs a project against sexual violence and trafficking in nine Amazon cities, focusing on children and young people from every background: rich and poor; rural and urban.

“Prevention is key to fighting sexual violence towards youth and children,” explains Manuel. “This means training young people to respond to situations of violence; making leaders and the general public more aware of the issues, and providing legal assistance.”

Caritas Manaus psychologist Rosivane Anjos hopes the Synod will bring the problem of sexual violence to the attention of governments and the public. She agrees with the Synod conclusion that young people need to be given space to become protagonists of their own destinies.

“Giving young people themselves the power to talk to their peers about difficult problems has been demonstrated to have an enormous impact,” she states, outlining how Caritas trains youth to raise awareness. These are surely the “prophets of hope” to whom the Synod final document refers, showing the pathway for a “renewed and courageous youth ministry”.

Caritas responds to the migration crisis in Brazil and Venezuela

The crisis in Venezuela has seen at least 168,000 migrants arrive in Brazil, of a total 4.5m who have left their country. 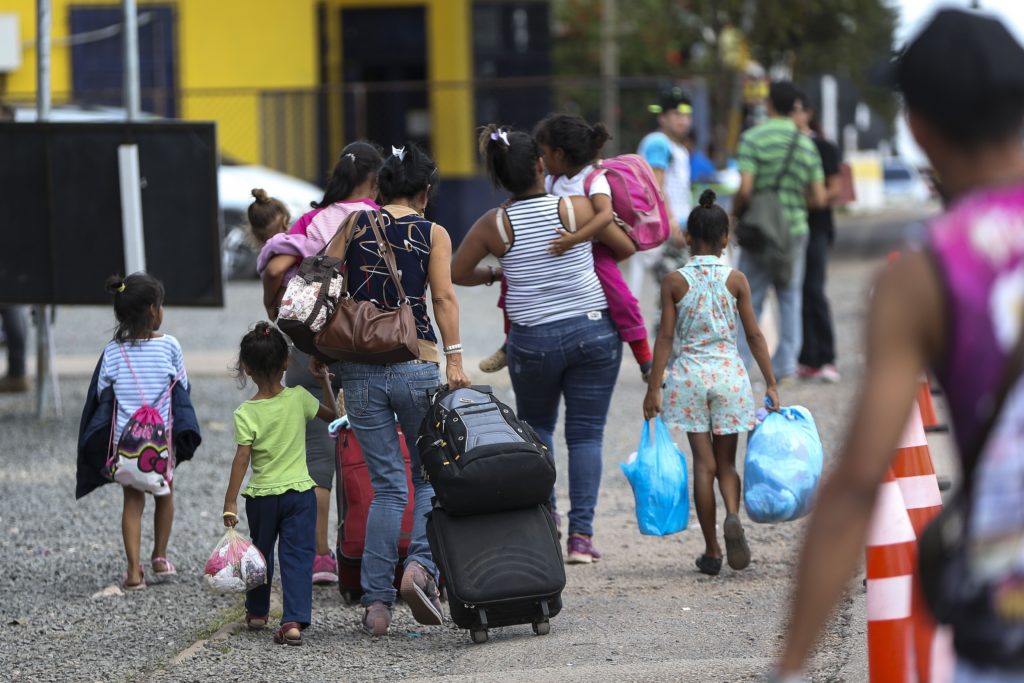 Many are from indigenous tribes, explains Aurinete Freire from Caritas Brazil, like the Warao people who are migrating by their thousands into northern Brazil. Speaking little or no Spanish or Portuguese, the Warao are particularly vulnerable.

“Women are a primary focus for us, as they are often migrating alone with their children and become targets of sexual violence,” says Aurinete.

Caritas is working with other civil society organisations to ensure these refugees can live in dignity, by providing shelter, medicine and accompaniment.

Migration both across borders and from rural areas to the cities is a huge phenomenon in the Amazon. Caritas is there to assist these people who have left their homes, as they strive to enter unfamiliar labour markets and adapt to local culture.

As Aurinete points out: “Caritas had a history before the Synod and we will have one afterwards. The path is made by walking… We are here to “Amazonise” the world, which means to work together, to share and to reciprocate.”

By Alejandra Pero and Harriet Paterson