Caught up in an Ebola epidemic while beset by militias, the people of eastern DR Congo face death on all sides. Caritas is standing with them. You are helping us to save lives and bring hope. Survivors, volunteers and Caritas responders tell their stories.

“The Church is always close in times of difficulty. People listen to the Church.”

In a humble wooden church in the Congolese forest, Abbé Michel Kabongenaye is giving one of the most important sermons of his life. He is telling his parishioners how to protect themselves against Ebola.

The parish of Christ Roi in Mambasa has been hit hard by the epidemic in DR Congo. Abbé Michel is on a mission of hope against fear and stigma.

“Ebola is threatening our home, and we must stop it,” he says to his flock. “Close your ears to the rumours. We are standing by you and we are here to help.”

Abbé Michel received Ebola awareness training from Caritas, along with hundreds of other local priests and religious leaders, catechists, volunteers and community heads. He hands the microphone to Emmanuel Bofoe of Caritas Congo, who gives health messages and explains how and when to get help. He is calm and clear. The rate of new cases is slowing for now, but the virus can strike again at any time.

On the way in and out of Mass, everyone washes their hands carefully at a Caritas wash point. “Now I know how to avoid Ebola,” says parishioner Aleko, “I am afraid, but at least I am ready when Ebola comes.” 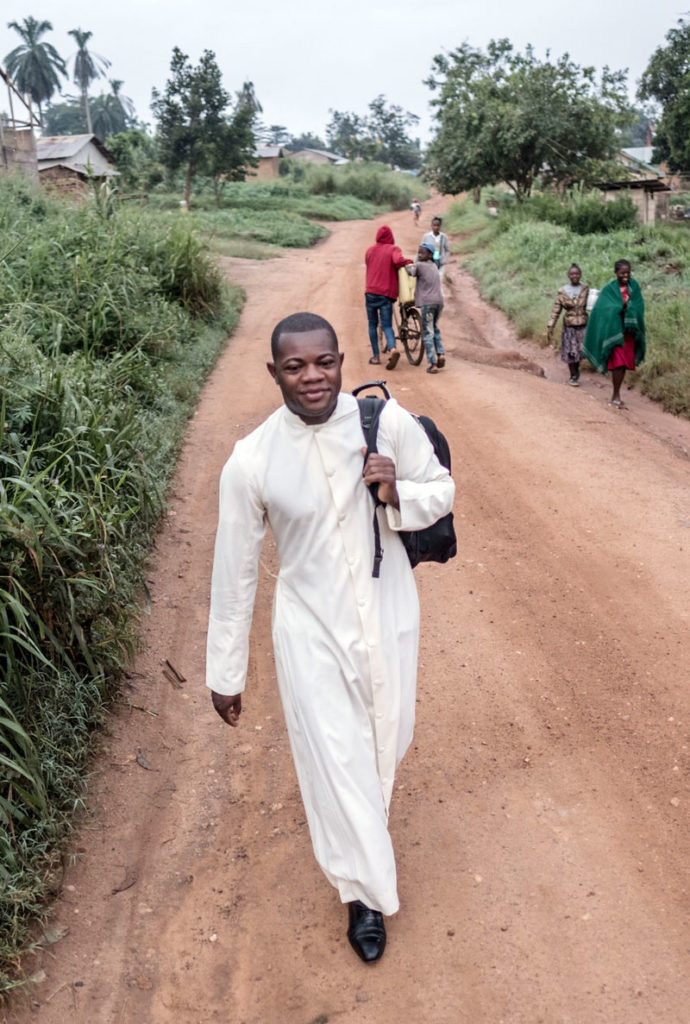 Bring comfort and hope to communities torn apart by crisis.

DONATE TO OUR EMERGENCY RESPONSE FUND 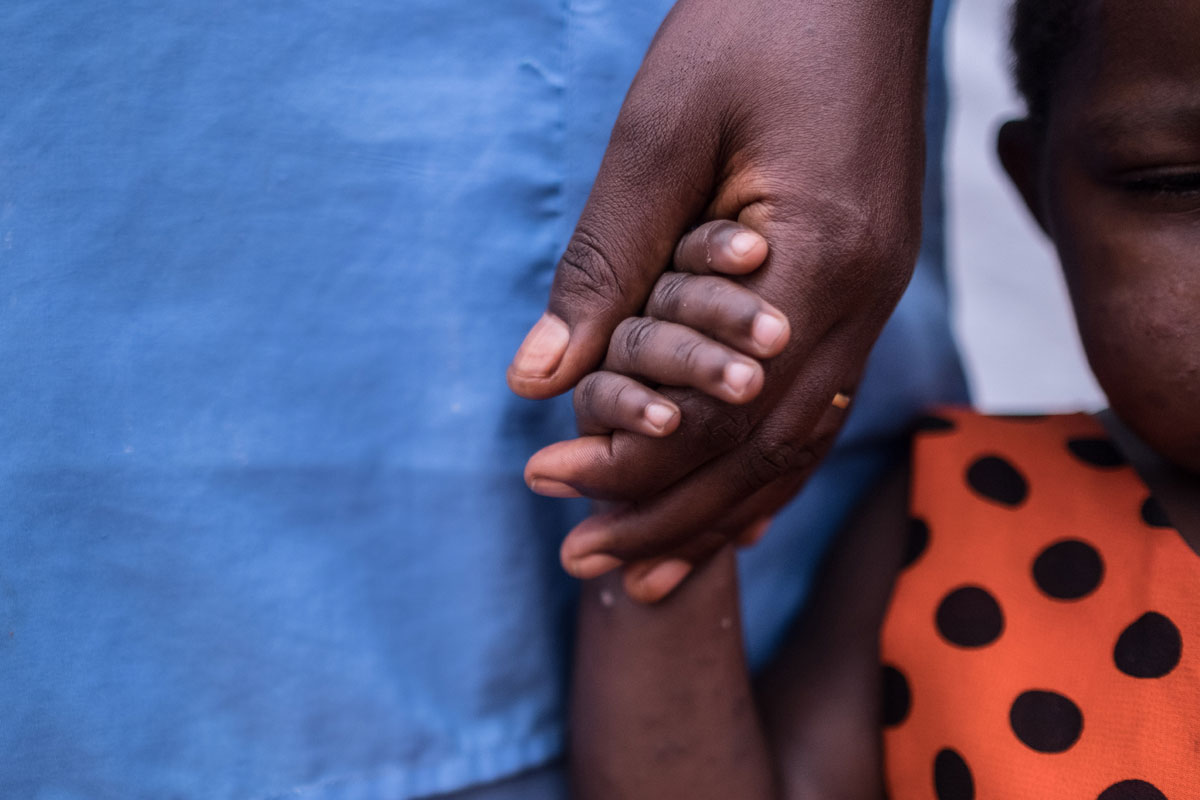 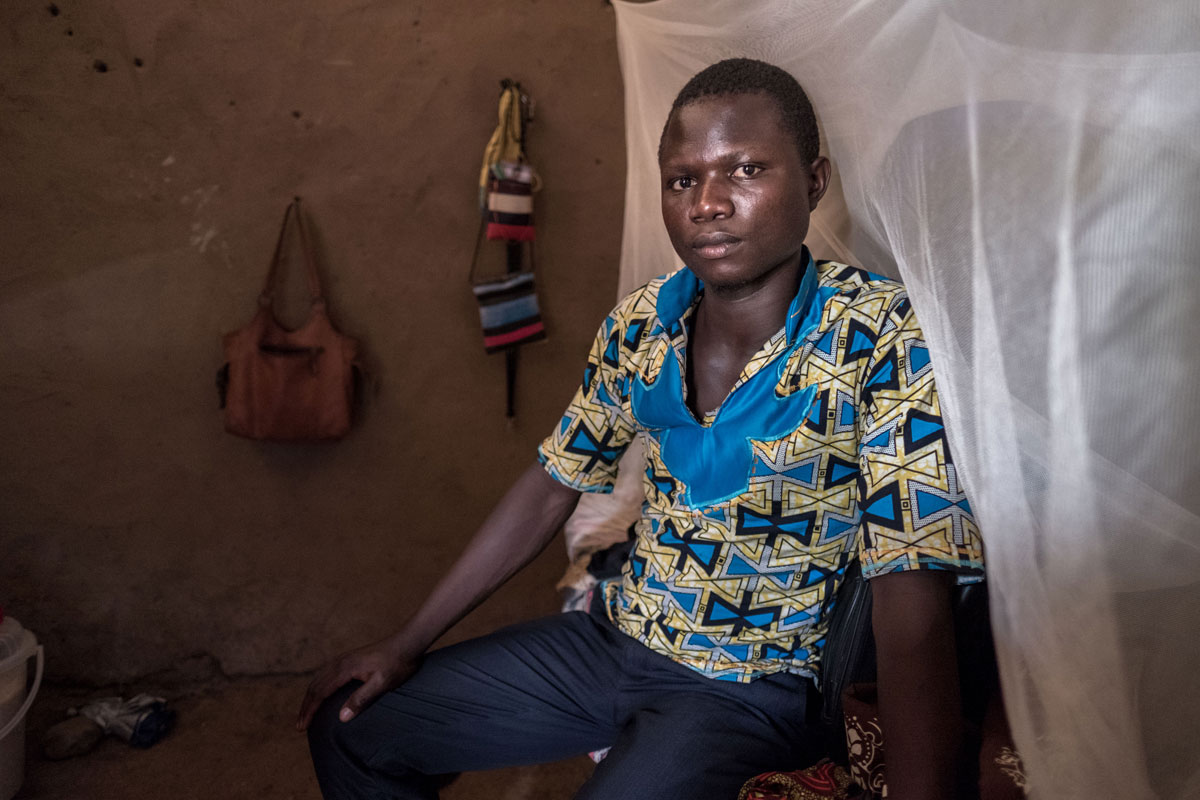 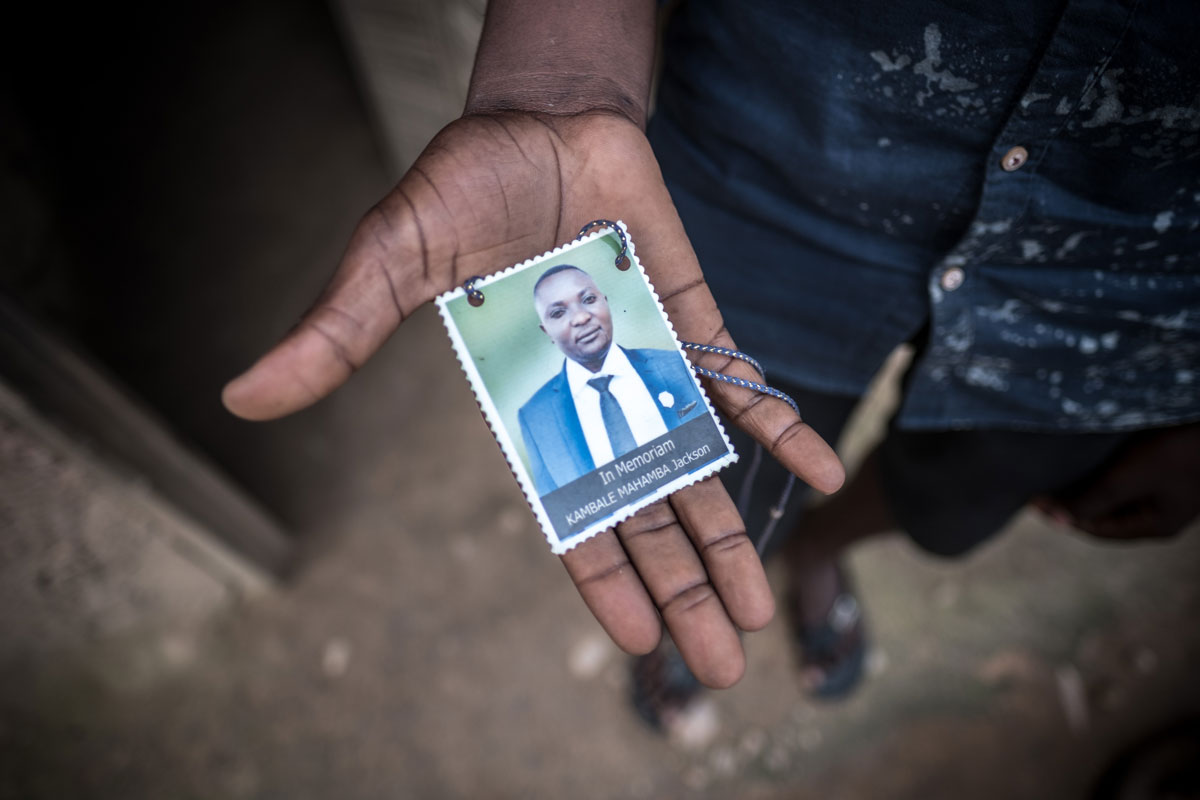 Caritas on the Ebola front line

“In sharing their suffering, I feel filled with new energy to protect life in the face of the epidemic.”

The current Ebola outbreak in DR Congo began on 1 August 2018 in the diocese of Beni-Butembo, along the Ugandan border, a complex territory tense with conflict.

“People trust Caritas and the Church because we have always been here,” says Emmanuel. “Working at Caritas means having a vocation beyond the professional aspect. It means dedicating your life to the service of the most vulnerable, without fear of the risks, confronting danger with faith.”

Strong faith-based organisations like Caritas are crucial responders against Ebola in DR Congo, where government institutions are widely discredited. During the 2014-16 West Africa epidemic that killed over 11,000 people, the death rate dropped sharply after faith institutions were properly included in the response.

“The Catholic Church includes over 70 per cent of the population in DR Congo,” explains Emmanuel. “It has powerful communication channels, through parishes, schools, clinics and radio stations.” Overall, the Caritas network is reaching around 1.3m people directly and 5.8m indirectly, with a total expenditure of over US$5m since the start of the crisis. 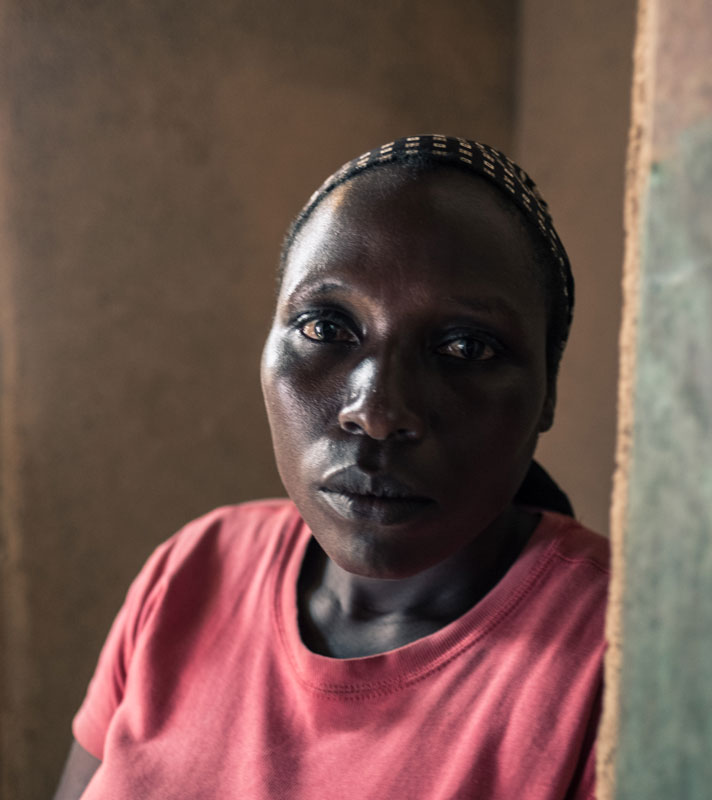 “They are waiting for death to come. Maybe it will be them tomorrow – or the next day.”

Kahindo lost ten family members to the Ebola virus, starting with her mother. Kahindo herself was sick, and terrified.

“By the time my mother died,” she says, “the whole family had symptoms and the health workers took us all to the Ebola centre. I was so afraid. All of us were afraid. More than 20 people were dying every night.” This epidemic, the second worst in history, has killed over half those infected.

“I don’t know why I survived and the others didn’t,” she says in bewilderment. Mercifully, her children all escaped.

Weak and grieving, Kahindo returned home, to find her neighbours and family shunned her. “I felt abandoned,” she says. “In my head I felt so alone.”

Then Caritas workers came, and explained gently to her remaining family that she was no longer contagious. They set up a monthly supply of rice, beans, oil and salt. 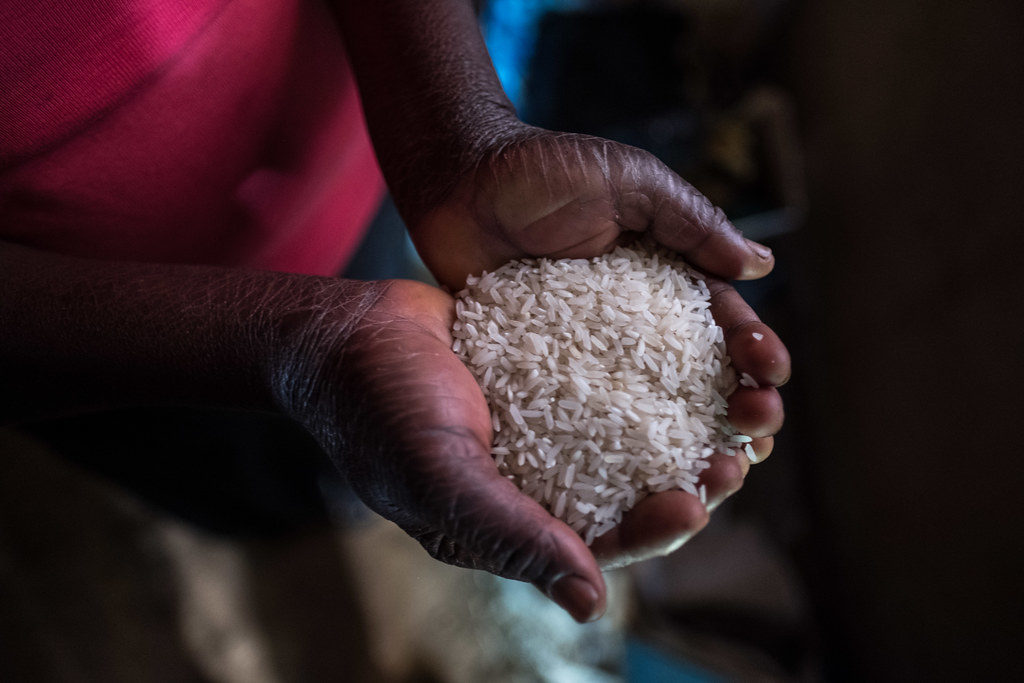 “Without that we might be dead already,” Kahindo murmurs. She now helps at a Caritas-supported creche, where children of Ebola patients are vaccinated and monitored for 21 days, giving them good survival chances.

“I wanted to repay the people who looked after me,” she explains. Working with the children is as important for her as it is for them, bringing a sense of purpose to help her own healing process. 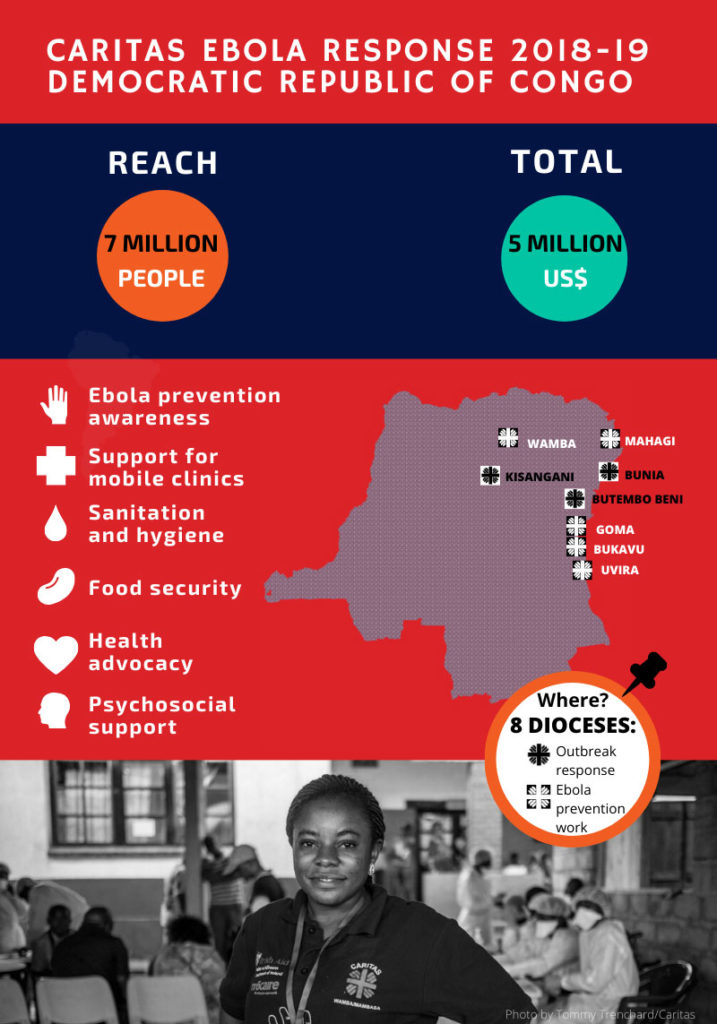 DONATE TO OUR EMERGENCY RESPONSE FUND 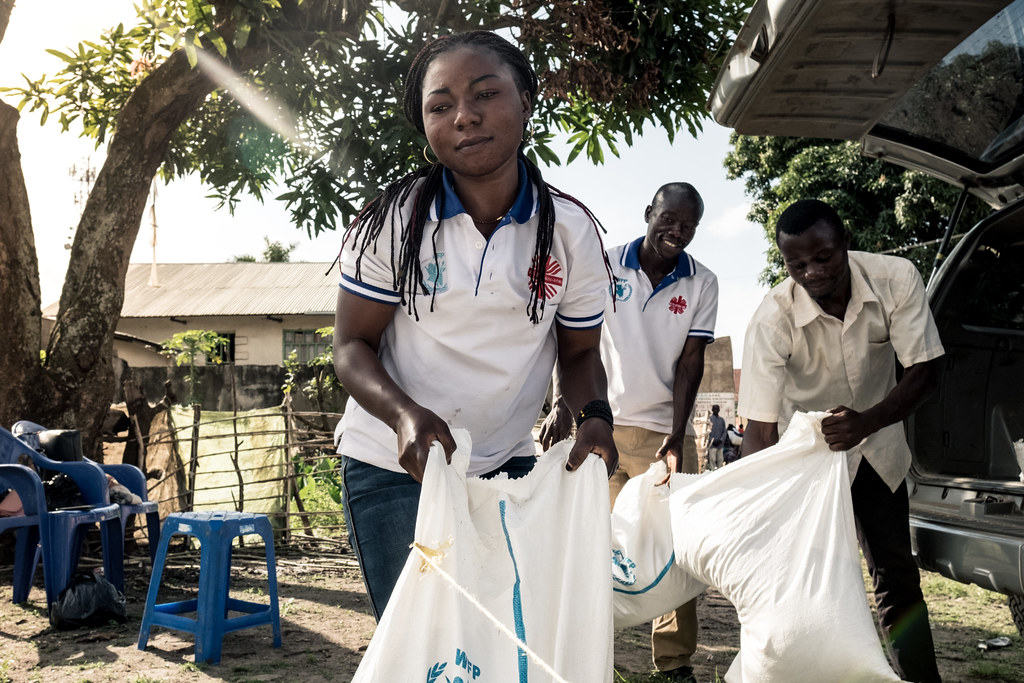 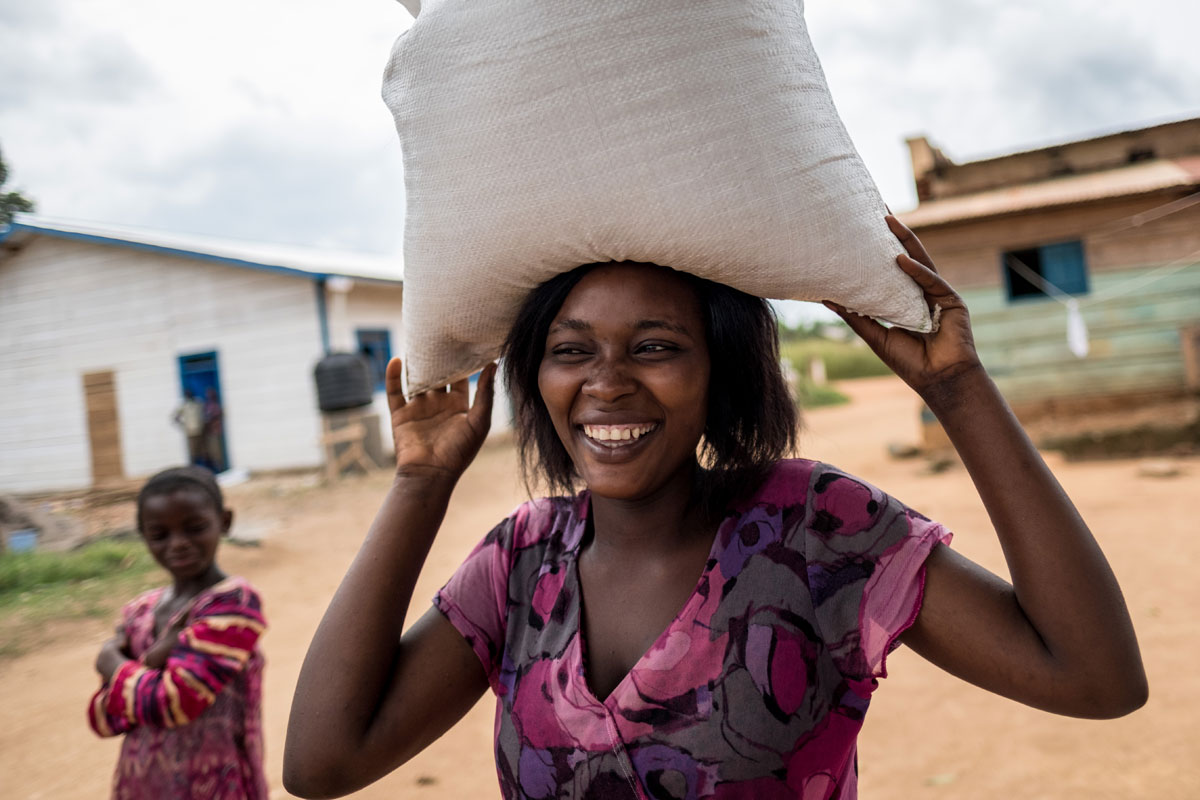 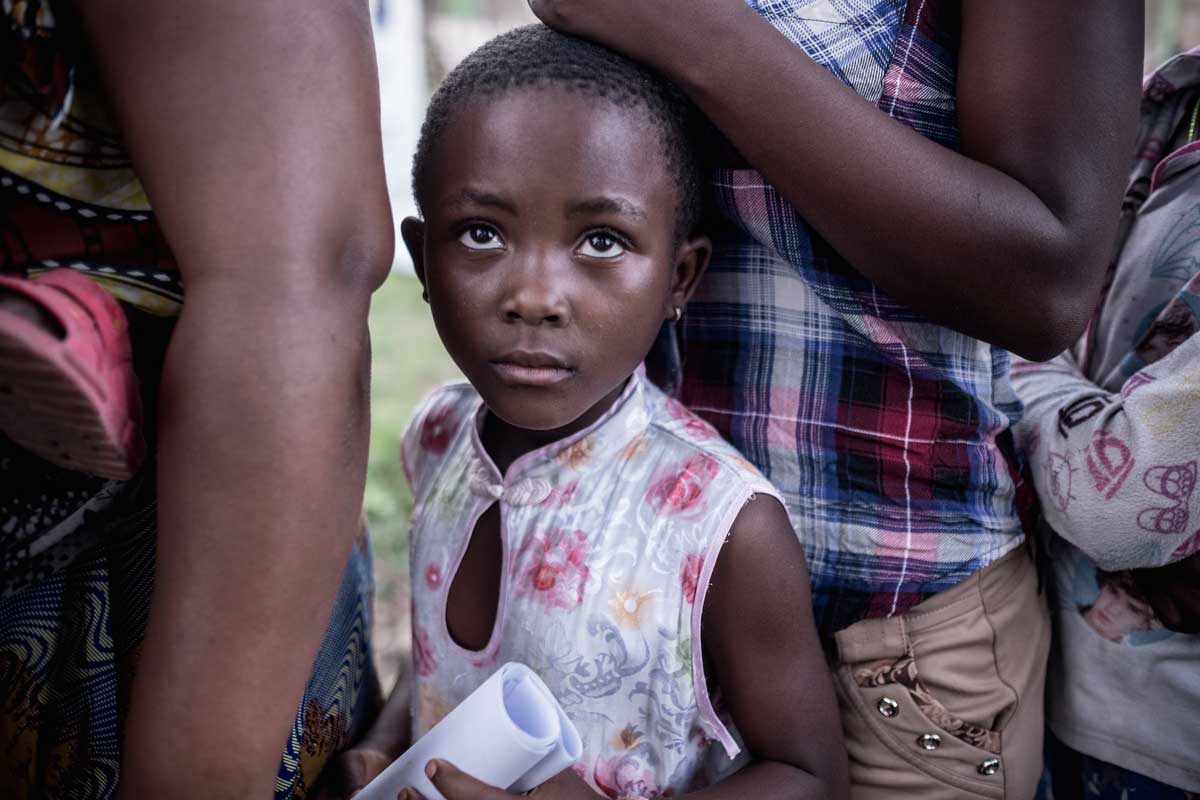 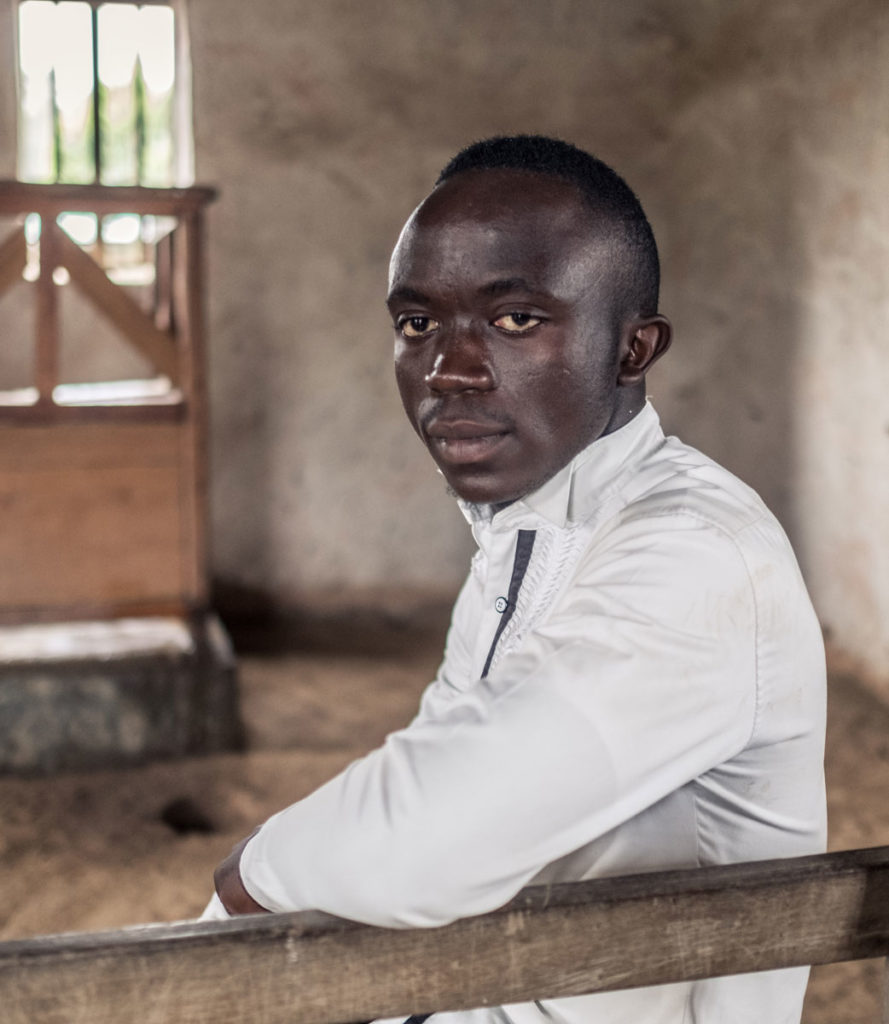 “When they burned down the local treatment centre we were very afraid. But we didn’t want to stop work.”

The work against Ebola is dangerous on all levels. Stigma around Ebola is a huge roadblock in eradicating the epidemic. Many do not believe the virus exists; rumours of witchcraft abound.

There have been almost 400 attacks on health facilities in 2019. Recently, two Ebola treatment centres in Biakato and Mangina and Caritas-supported Radio Mungumba in Komanda were attacked and six people killed. Meanwhile civilians have endured 25 years of hellish conflict between multiple militias and the army. Small wonder their trust is at rock bottom.

Against such a backdrop, trust has to start from within the community. Mathe, head of a youth group, in Katwa, North Kivu, witnessed the suffering at the epicentre of the outbreak. “No-one can imagine what I saw and lived through during that time,” he recalls. “I feel so much pain when I think back.”

He knew he had to step up. He attended Caritas training, which encourages local opinion-formers to mobilise their networks: from imams and priests to hairdressers and taxi drivers.

His group began circulating facts about Ebola by text message. Gripped by fear and suspicion, people were very hostile. “I was seen as a sorcerer and an enemy, because I was raising awareness about Ebola,” Mathe explains.

Katwa went into lockdown against outside health teams. Caritas had to pass cash in through locals to provide essential hygiene items. People secretly buried the bodies of their families under cover of night, becoming contaminated themselves. 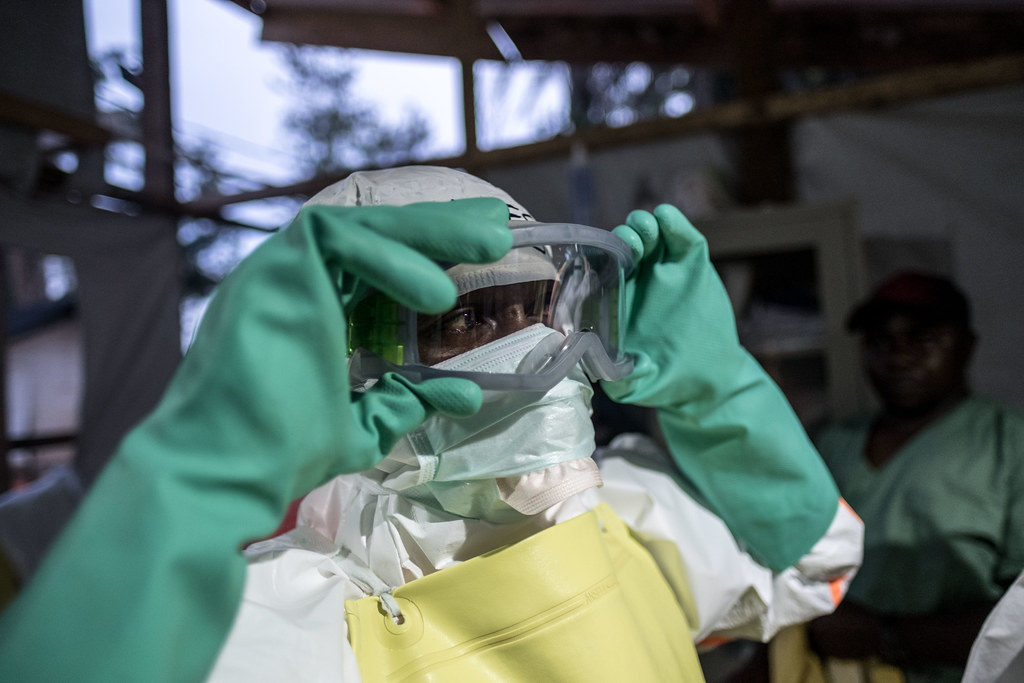 But Mathe’s group persisted. “We told them Ebola was real, and how to stop it. People were relying on us and we felt it was our responsibility. They trust us now, and that makes me very happy.”

Thanks to its ties to the Church, Caritas was the first humanitarian organisation accepted into the town. Public messaging was strengthened and handwashing stations set up. Other health responders joined in.

The number of new cases in Katwa has today dropped to zero. Children laugh and play on the way home from school. “I’m so glad Caritas supported us to do this,” says Mathe.

Whilst facing their own fears, volunteers like Mathe together with Caritas staff and the Church are at the people’s side through the epidemic and conflict. They offer practical help, consolation for the bereaved and hope for the future. Ebola remains a deadly threat, but the long-suffering people of DR Congo are discovering how to face it together.

Please pray for those affected by Ebola and all who work to protect them. 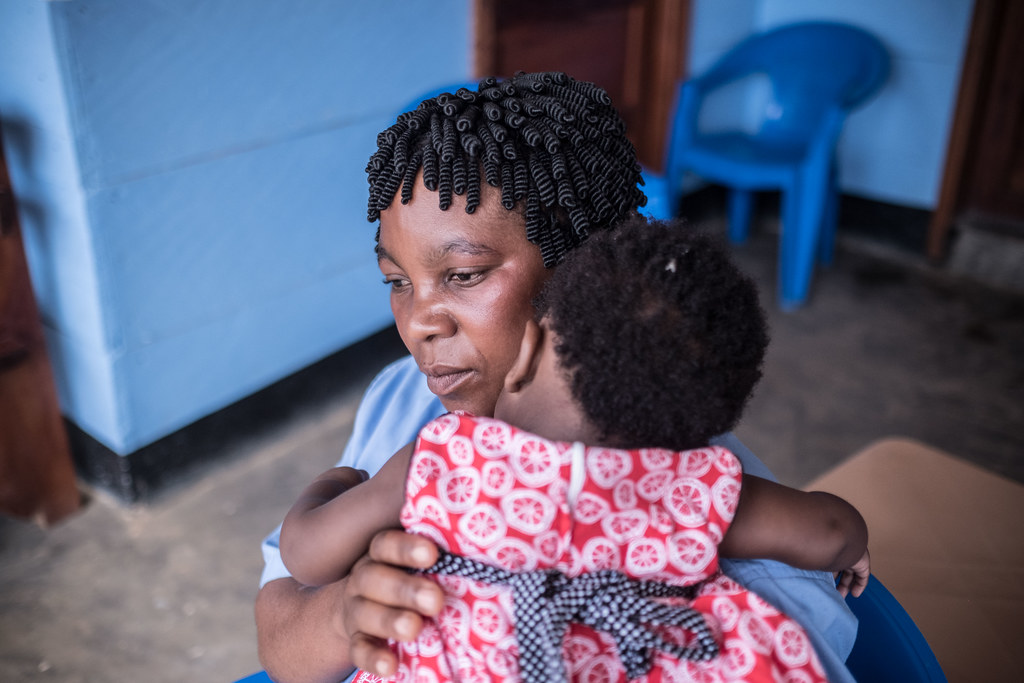 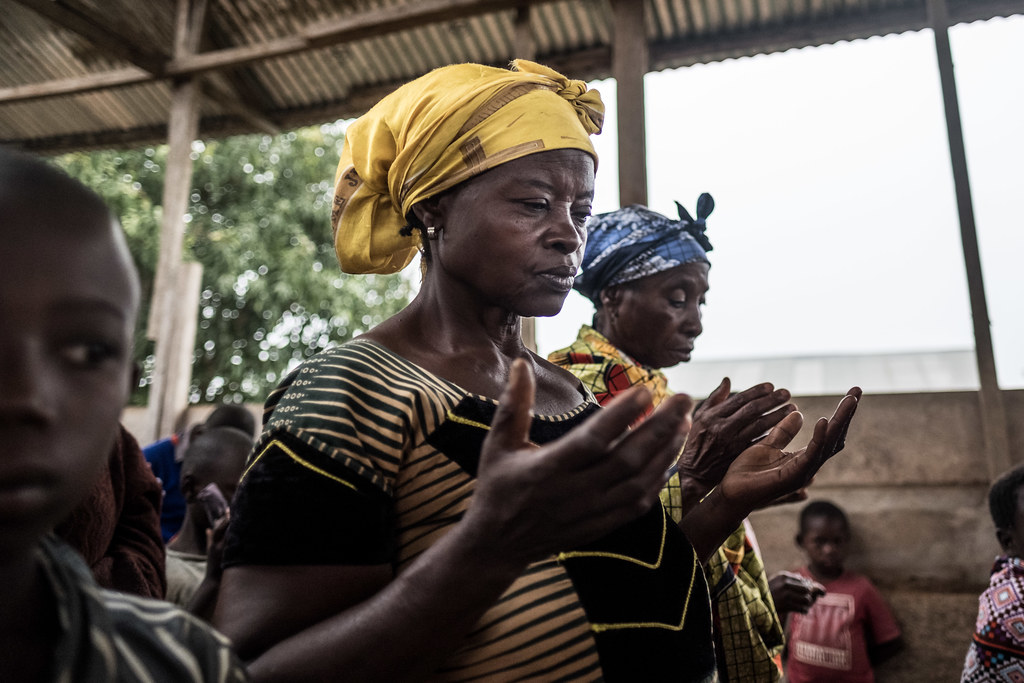 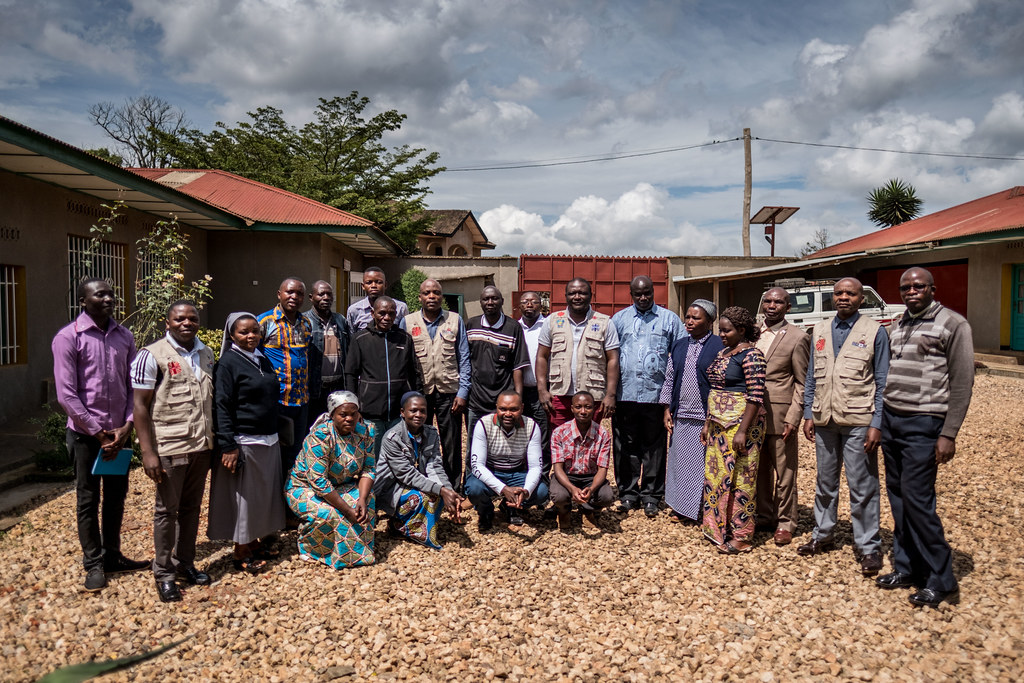 Lord Jesus,
when you walked with us on earth
you spread your healing power.

We place in your loving care
our people affected by Ebola,
in a country plagued by war.

From the forests of fear and death,
we cry out to you.
Keep us strong in faith, hope and love.

Bring relief to our sick,
console our bereaved,
protect those who care for us.

We lift our prayer to you Lord,
and trust in your infinite mercy,
as we wait for the daybreak.
Amen.

16/12/2019 Africa, Conflicts and Disasters, Congo, Democratic Republic of, Emergencies by Myra Soetandyo
Prev
Next
This website uses cookies to improve your experience. We'll assume you're ok with this, but you can opt-out if you wish.Accept Read More
Privacy & Cookies Policy
Necessary Always Enabled